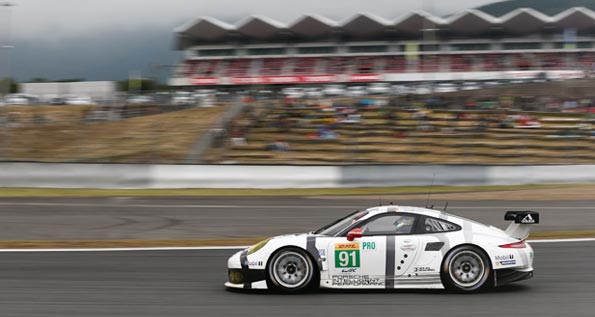 Dr. Frank-Steffen Walliser, Head of Motorsport: “Unfortunately we couldn’t do any better today. With one car we lost it all in the first corner. That was a shame and we couldn’t recover lost ground. The second crew did a great job but nothing more could be done there either. Something positive today was that our cars ran faultlessly, precisely as we had imagined. In the GTE-Am class our two customer teams put in a strong performance and went head-to-head for third place right up to the last metre.”
Jörg Bergmeister (#91): “We already saw in free practice that tyre wear would play a decisive role. We struggled right from the start, particularly with the rear axle where the tyres deteriorated badly.”
Richard Lietz (#91): “We certainly made the best out of the situation. The team did a great job and the pit stops were perfect. And we experienced no technical hiccups. So we should be satisfied, even if the result is not exactly what we had expected.”
Patrick Pilet (#92): “After just one corner our race was over. The Aston Martins crashed, one kept his foot on the throttle, swung to the inside and hit the side of my car. I had no chance to avoid contact. Our car was so badly damaged I had to pit and that was basically the end of our race. It was simply bad luck. Now we’re turning our attention to Shanghai. Hopefully we’ll have more luck there.”
Frédéric Makowiecki (#92): “Obviously that wasn’t quite the result we had anticipated. Over and out after just the first corner, but that’s what happens sometimes in motor racing. For us it was important to reach the flag without any further incidents and earn points. We managed this and that’s one positive thing we can take home from Fuji. At the next round in Shanghai we now have to try everything to make up for what we lost.”