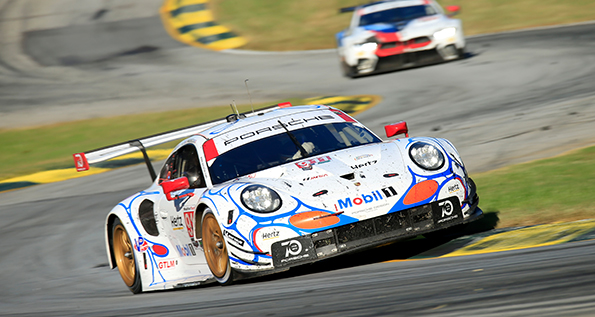 The GT Team has won the final round of the 2018 IMSA Weathertech SportsCar Championship. Patrick Pilet (France), Nick Tandy (Great Britain) and Frédéric Makowiecki (France) won the Petit Le Mans race at Road Atlanta on Saturday. In the race over ten hours at Braselton, Georgia, put in a strong performance against tough competition in the GTLM class. Thanks to perfect tactics and a flawless race, the ca. 510 hp 911 RSR scored its third win of the season in the North American championship. Laurens Vanthoor (Belgium), Earl Bamber (New Zealand) and Mathieu Jaminet (France) concluded the last IMSA race of the year in sixth place.

The victorious trio in the No. 911 maintained their promising position in the early phase of the race. With consistent lap times and perfectly executed pit stops, the three worked their way through the field at the endurance classic. With approximately three hours left on the clock, Makowiecki moved into the lead and defended this position. Tandy then brought the car over the finish line in first place with an advantage of 11.443 seconds.

For 71 laps, the sister car with the starting number 912 was also on course for victory – despite a puncture early on in the ten-hour race. A drive-through penalty, however, threw the trio down the field. Bamber, Vanthoor and Jaminet tried everything to catch up, however the fierce competition in the GTLM prevented them from making up lost ground. The vehicle crossed the finish line one minute behind the winning No. 911 car.

In the GTD class, the customer team Wright Motorsports concluded the final race of the season in fourth place. Works driver Patrick Long (USA), Selected Driver Christina Nielsen from Denmark and Germany’s Robert Renauer put in a strong drive in the 500 hp 911 GT3 R with the starting number 58. However, like with the No. 912 factory car, a drive-through penalty cost them a possible class win. The fielded by Park Place Motorsports had to retire early from the 2018 Petit Le Mans. Wolf Henzler (Germany) had shared the cockpit of the No. 73 car with Americans Timothy Pappas and Spencer Pumpelly.

Comments on the race
Dr Frank-Steffen Walliser (Vice President Motorsport and GT Cars): “Our strategy worked perfectly. Right from the start, we focused on having a car at the end of the race that was very fast in cool conditions. Patrick laid the foundations for this success with a strong double stint. Nick and Fred then brought it home. But you need the right tactic, too, and that worked perfectly. Petit Le Mans was a huge race. This victory fits perfectly with the successes that came just in time for ’s 70th anniversary. If someone had written a film script for such a scenario, no one would have believed it to be real. But it worked and that’s just terrific!”

Pascal Zurlinden (Director GT Factory Motorsport): “It was a gripping race with highs and lows. Minor errors on the racetrack cost us some time, but with perfect strategies and tyre choices we made it to the front of the field. After victories in Sebring and at Le Mans and now Petit Le Mans – the entire team simply did a perfect job, and today we extended the contract with the squad for another three years. Now we’ll prepare for next season.”

Nick Tandy ( 911 RSR #911): “What a crazy race! We were relegated from the front to the back and then came back to the front. When you’re a lap down and still manage to win, it shows just how brilliantly the entire team worked. Our focus was on ensuring that the car was still fast in cool temperatures at the end. And it worked perfectly. And that was the key to victory.”

Patrick Pilet ( 911 RSR #911): “Such moments underline why we systematically work together as a unit throughout the year. In such races you’re rewarded for this. We always believed we could win. When Nick climbed into the car for the final stints, I said to him: “Do it like at the Nürburgring. Go flat out and give it all you’ve got.” That’s exactly what he did. Everything came together. I’m incredibly proud of the whole team. To score so many victories at major races in one season is simply a dream.”

Frédéric Makowiecki ( 911 RSR #911): “Victory at Sebring, at the Nürburgring and now here – amazing! It shows just how well Patrick, Nick and I work as a team. Again today, we always believed we could do it and we stayed calm even in difficult situations. As a driver, it simply feels fantastic to win three big races in one year.”

Laurens Vanthoor ( 911 RSR #912): “This race actually went like the second half of the season: We had every chance to win, but we walked away empty handed. Congratulations to our teammates in the 911. It was a tremendous achievement for Patrick, Nick and Fred.”

Earl Bamber ( 911 RSR #912): “We definitely had a winning car today. That’s why it was extremely disappointing to receive a drive-through penalty. It ruined our chances of winning.”

Mathieu Jaminet ( 911 RSR #912): “I drove a double stint when the racetrack was at its warmest. Under these conditions, our car wasn’t as good as later when the temperatures dropped significantly. I tried not to make any mistakes and to conserve the tyres. I think I managed to do that pretty well. My first race in the 911 RSR for the GT Team was a great experience. I really enjoyed this weekend.”