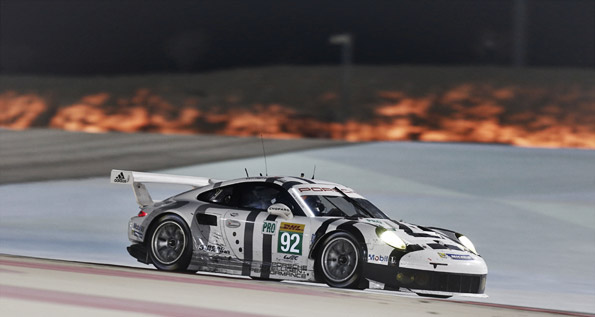 Stuttgart. Despite an inspired charge through the field on the Bahrain International Circuit it was not enough for the 911 RSR to secure a podium spot for the first time in this year’s sports car World Endurance Championship, two weeks after a brilliant double victory in Shanghai. In the number 91 Team Manthey 911 RSR, works drivers Jörg Bergmeister (Germany) and Richard Lietz (Austria) scored fourth place in the highly competitive GTE-Pro class at the penultimate round of the season in the Kingdom of Bahrain at the Persian Gulf. Their factory pilot colleagues and Shanghai winners Frédéric Makowiecki and Patrick Pilet from France saw the flag in fifth at the wheel of the number 92 vehicle.

It was already clear in qualifying that the 911 RSR would face a difficult race in the hot and humid weather conditions on the 5.407 kilometre Grand Prix circuit outside the capital of Manama. For this reason, the Manthey squad decided to use a different strategy than the opposition. During the early first safety car phase, the two works vehicles from Weissach were called into the pits for servicing, while the competition stayed out on the track. At first this strategy looked as if it might work: After the first hour of racing, Richard Lietz was running at the head of the GT field with Frédéric Makowiecki close behind on second place. At the 2.15-hour mark, Jörg Bergmeister was leading in the number 91 911 RSR. Halfway through the race when the Bahrain International Circuit was already in darkness, his teammate Richard Lietz was back at the front.

This was to be the last time in the lead for a 911 RSR on this day. The hopes of the strategists behind the pit wall that this rhythm would continue and a quick splash-and-dash refuelling stop shortly before the end of the race would be enough to salvage a top placing were dashed due to the unusually low number of safety car phases. Before his final pit stop at the beginning of the sixth race hour, Richard Lietz was on course for a podium spot in third place. Jörg Bergmeister took the wheel the car for the last stint which had fallen back to fourth after the last stop, and launched an attack on the Ferrari in front of him. Ultimately he missed out on a podium result by a little over two seconds after he was significantly hindered by a sports prototype and lost direct contact to the vehicle in front. At the penultimate round of a gripping season, the Team Manthey had to settle for positions four and five.

Dr. Frank-Steffen Walliser, Head of Motorsport: “The teams and drivers again made the most out of a difficult starting position today. In the first stint we made the wrong tyre choice and for that reason we weren’t able to secure a better result in the race. The WEC rounds are so close that even the slightest mistake cannot be rectified with a massive effort out on the track. This result has significantly reduced our chances of taking the title at the season finale in Sao Paulo.”

Patrick Pilet ( 911 RSR #92): “From the start I tried to put the pressure on. Our goal was to win and to defend ’s chances in the championship. Unfortunately this wasn’t possible. We’ll now analyse why this happened and then hopefully take the right steps for the season finale in Sao Paulo.”

Frédéric Makowiecki ( 911 RSR #92): “We’re disappointed of course. It was a difficult race. We couldn’t come up with the performance today that would have given us a winning chance. Now we’ll look for the causes. Everyone in the team did everything they could and the mechanics did a perfect job during pit stops. Unfortunately it wasn’t enough this weekend.”

Jörg Bergmeister ( 911 RSR #91): “Just before the flag, three LMP vehicles passed me and one of them pretty much stopped in front of me. I had to drive completely into the dirt and this allowed the Ferrari to pull ahead more. I was only several tenths of seconds behind him and at this stage I was even a little faster. But by the time the tyres were clean again the Ferrari was long gone. Other than that, it was a difficult race. Compared to qualifying we’ve taken a step forward and that should make us feel positive. Hopefully we’ll be back on track in Sao Paulo.”

Richard Lietz ( 911 RSR #91): “That was a really tough race. We did everything we could and we shouldn’t blame ourselves that we didn’t do enough. But this time we didn’t have a chance. We had to look after our tyres and still push hard every lap – obviously this was very difficult. It’s unbelievable how fast the competition was today. Hopefully for Sao Paulo we’ll find a way to get back on the road to success.”

The final round of the Sports Car World Endurance Championship WEC is held on 30 November in Sao Paulo/Brazil.