Return of the Racers

Coming home: Crossing the Atlantic without a tarp. The 911 RSR emerges in all its glory from the cargo plane.

The stag lives on: A reunion after more than forty years. Eckhard Schimpf has brought together the most important cars from Jägermeister Racing—the team that sent greats like Graham Hill, Niki Lauda, Stefan Bellof, Hans-Joachim Stuck, Jochen Mass, and Jacky Ickx to the start from 1972 to 2000. He recently acquired a highlight from the United States: the legendary 911 RSR built in 1974.

A faraway look comes into his eyes, memories flood back, and a broad smile appears on his face. “It was like a reunion with an old friend,” he says. It has been quite a while since Eckhard Schimpf (77) last navigated the tight curves of the Motorsport Arena in Oschersleben, but his thoughts are clearly flying around the circuit again—in the orange 911 RSR from 1974.

Change of location: Braunschweig. We stand before a building that is almost entirely black. An orange number on the outside is the only indication of what it contains: historic race cars with the famous paint job of the Jägermeister team. Icons of a bygone era—although everything smells brand-new. “We’re not quite finished yet,” says Schimpf, who used to be both manager and driver for the team in orange. He asks us not to take any photos. “We still need a little time to make everything presentable,” he explains, referring to the interior decoration. The cars themselves are all ready to go.

Schimpf is very close to achieving his goal. Together with his son Oliver (51), who is the CEO of a tech company, he wants to bring his team’s most attractive cars back to this black building in Braunschweig. “We’ve managed to gather all the important ones,” he says with evident satisfaction. The coup has succeeded. Supported by the family-owned Mast-Jägermeister company, father and son have bought back more than a dozen race cars sporting the Jägermeister livery from around the world.

If the racing community had found out about their plan too soon, the cars would have been unaffordable, says Schimpf. A major highlight of the collection is the radically streamlined RSR 3.0. Schimpf himself sat behind its wheel more than eighty times. It landed at the airport in Frankfurt just a few weeks ago. “We went through a poker game followed by an odyssey,” he says, describing the efforts to acquire the RSR.

Schimpf’s métier is language. He was not a professional racer. He had to balance his duties as team manager and his participation in races with his career as a journalist for the local newspaper, the Braunschweiger Zeitung. A tolerant publisher and his passion for writing enabled him to split his time between the racetrack and the editorial office. He was successful in both milieus. In fact, he went on to spend a great many years in the chief editorial team of the respected daily.

He launched his hunt for the hunters (Jäger means “hunter” in German) in 2007, and at first the quest seemed uncomplicated. Schimpf clearly recalls how he and John Byrne, the man who bought the RSR back in the early 1980s, sat on the terrace of the Hyatt Hotel in Carmel-by-the-Sea for four hours over cake and ice cream. “John told me I’d get my car back.” Schimpf was relieved. “But then a very wealthy Chinese fellow entered the picture, who also wanted to buy it.” And the poker game began.

Out for a run: Four decades later—but as familiar as back in the 1970s.

Retrospective: Eckhard Schimpf was both manager and driver for Jägermeister Racing—and now he collects mementos.

“I left the negotiations to Oliver, because I was just too emotional about it,” says Schimpf. So Oliver flew to San Francisco three or four times to visit John Byrne and his family. And finally the decision was made. “I gave my word, and that’s what counts,” said Byrne. And thus a crucial part of the “Orange Reunion” mission was accomplished.

The phone rang in Braunschweig. “It was a very intense moment for me,” Schimpf recalls as he unrolls an old racing poster from the 1970s lying amidst original stickers and drivers’ licenses in the black building. “That car was part of my life.” As if trying to avoid any appearance of sentimentality, he quickly adds, “I don’t want to reduce my life to racing, but it really was an intense time.”

From 1972 to 2000, Jägermeister Racing fielded an impressive array of drivers, a Who’s Who of racing greats. It started with Graham Hill, a two-time world champion. He was followed by Vic Elford, Niki Lauda, Hans-Joachim Stuck of course, Stefan Bellof, Ronnie Peterson, Jochen Mass, and Jacky Ickx. Well over one hundred drivers. From hill-climbing to the Formula One, Schimpf’s team entered all the popular classes. With Schimpf in the thick of things, financed by his cousin Günter Mast, who owned the Jägermeister distillery famous for its herbal schnapps. “I was never paid for my work as team manager,” he says in describing the family arrangement. “I had the opportunity to race and be involved, and that was enough for me.”

And then this man with wavy white hair makes a paradoxical statement: “I was a race-car driver without ambition.”

Trusted friends: He immediately remembered how to operate and handle the car. The knowledge was never lost; it remained in the back of his mind.

Schimpf tends to speak quietly, especially if the topic is important to him. Such as now. He quickly realized that he didn’t quite have what it takes to make a great race-car driver. Presumably, that no-holds-barred, death-defying drive, with a touch of madness. “But I loved the atmosphere, and I was involved. I entered the same races as the top drivers—and I wasn’t all that bad,” he says, shifting from a modest to a more objective assessment. He often won hill-climbing races in particular, and also finished very high in circuit races. He had real talent, that much is certain.

“I enjoyed being a race-car driver. I enjoyed being part of the team,” he says. His eyes are shining, and his words are coming quickly now, with melody and rhythm. The man of language has merged with the man of the track. The drivers were a close-knit community. They would get together in the evening before each race. “There were sixteen or eighteen of us; we’d all go out to eat, and race the next day.” The pleasure seems as real now as then. “You only know what these moments are like if you’ve been behind the wheel yourself.” And then the actual race when the cars thunder toward the first curve. “That’s something no one on the sidelines can imagine.” His words come quickly. “The top drivers are all around you; you look over and see Stuck, or Lauda, or Wollek, or Stommelen—fabulous.”

In 1982, Schimpf decided to end his part-time racing career. He hung up his racing overalls. He had always been aware of the danger involved, but “had never really thought about it” until one moment during the 1,000-kilometer race on the Nordschleife of the Nürburgring. He had a good position in the race, but a glance at the jump after Pflanzgarten suddenly gave him pause. “What am I doing? If something breaks here, I’m toast.” And he made his decision that instant. His performance had nothing to do with it. That day, in his last serious race, he took fourth place.

Living legends: Forty years and thousands of kilometers haven’t tired the RSR as it zooms through the curves, effortlessly powered by a 330-horsepower six-cylinder boxer engine.

He finished the race, drove home to Braunschweig, and said to his wife Heidi—probably very quietly—“That’s enough.” The farewell was surprisingly easy. “I also realized that I had reached my physical limits.”

Fast-forward to the present. Here in Oschersleben, reality clicks into place—quite literally. Wearing a helmet and racing suit, Schimpf climbs into the RSR and runs through the gears. Every movement is polished. His son had warned him about the car. “He told me it’s virtually undrivable. That it’s quite tricky to shift, nothing is precise anymore, you can hardly find the slots.” Schimpf smiles contentedly, and his voice becomes quiet. “But I was immediately one with the car again.” A reunion with an old friend.

He drives out onto the track, which consists of fourteen curves stretched over a little more than three and a half kilometers. “Everything was immediately familiar,” he says afterward. “I got into the car, shifted through the gears—and they all clicked perfectly into place.” In some deep corner of his mind he had stored the knowledge of the RSR’s little idiosyncrasies, invisible but immediately accessible. Life experience.

A few familiar signs are still visible. Like the marking with yellow tape on the steering wheel. It shows when the wheels point straight ahead.

The 330 horsepower bellow—the stag lives on. 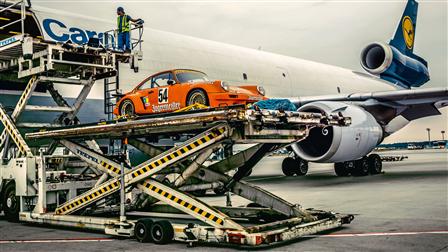 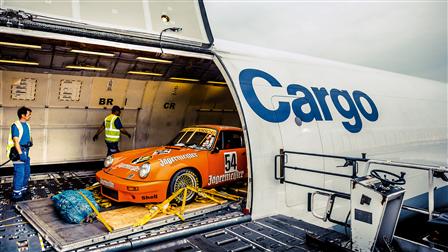 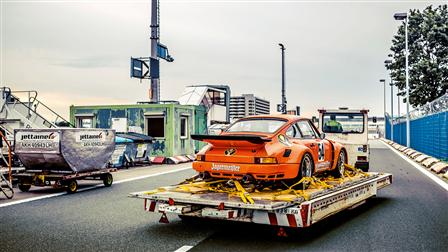 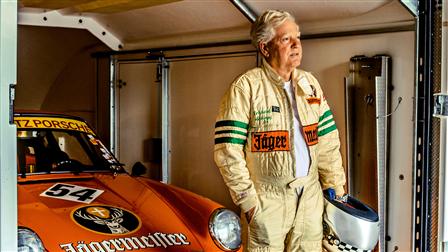 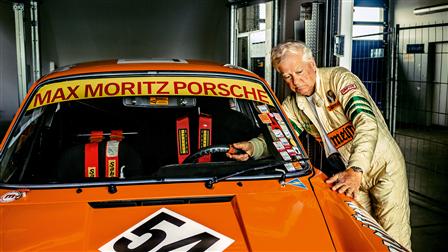 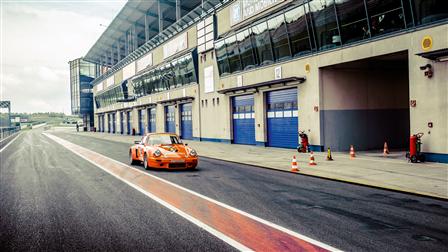 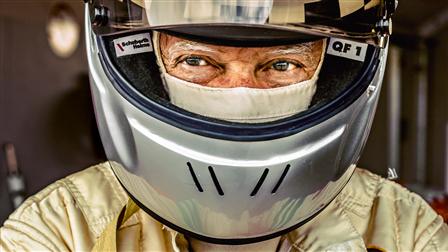 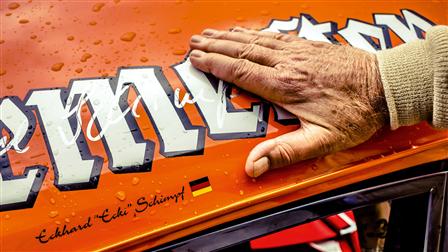 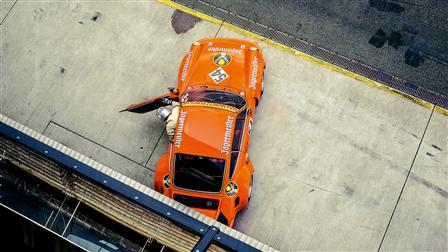 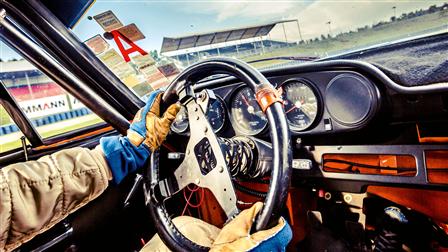 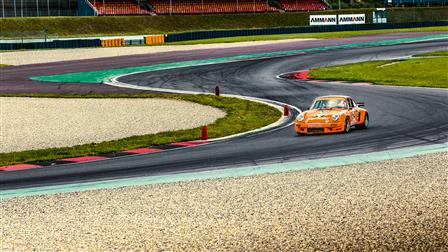 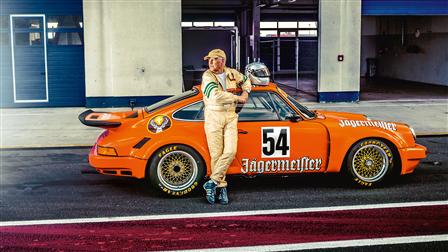