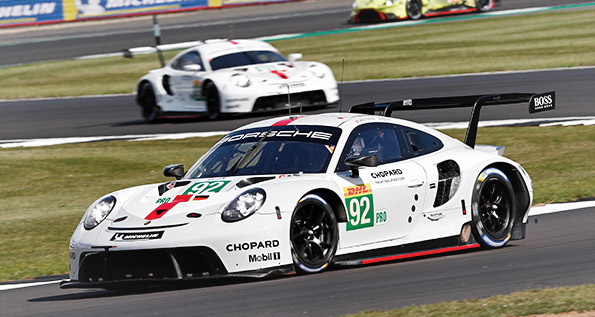 Stuttgart. At round five of the Sports Car World Endurance Championship WEC at the Circuit of the Americas (COTA) in Austin on 23 February, aims to clinch its first U.S. victory with the new 911 RSR. After a successful start to the 2019/2020 season with a one-two at Silverstone (Great Britain) as well as podium spots in Fuji (Japan) and Shanghai (China), fifth and sixth places followed at the Sakhir (Bahrain) race in December prior to the winter break. Moreover, the GT Team had posted pole position three times. After four rounds, the works team currently ranks second in the manufacturers’ classification with the two latest-generation 911 RSR racers. In the drivers’ category, the two ca. 515 hp GT racers sit third and fifth. Three customer teams field another five 2017-spec 911 RSR in the GTE-Am class at the six-hour race in Austin, Texas.

The race
After the cancellation of the race in São Paulo (Brazil), the FIA World Endurance Championship WEC returns to Austin this season. The Circuit of the Americas already hosted the World Sports Car Championship between 2013 and 2017. The 5.513-kilometre Grand Prix circuit with its 20 turns and at times significant changes in elevation is considered a very demanding racetrack. Since its completion in 2012, the Circuit of the Americas to the south of Austin is a regular venue for Formula 1 races in the USA. On account of the many bumpy sections, parts of the track surface were removed and replaced at the beginning of 2020.

The GT Team drivers
Gianmaria Bruni from Italy and Austria’s Richard Lietz helm the No. 91 911 RSR. The duo returns to Austin with fond memories. Lietz won the GTE-Pro class in 2015. In the past, his teammate Bruni has claimed three podium spots at the WEC race in Texas. The current WEC champions Michael Christensen and Kévin Estre also have good memories: Christensen won in 2015 and finished second with Estre at the final WEC round at Austin in 2017. The Danish-French pair shares the cockpit of the No. 92 car.

The Project 1 customer team also campaigns two 2017-generation 911 RSR. At the wheel of the No. 56 car are Matteo Cairoli (Italy), Le Mans class winner Egidio Perfetti (Norway) and the Dane David Heinemeier Hansson. Ben Keating from America joins forces with Jeroen Bleekemolen from the Netherlands and Felipe Fraga from Brazil to tackle the race. Gulf Racing’s No. 86 vehicle is shared by the all-British line-up Michael Wainwright, Ben Barker and Andrew Watson.

The 911 RSR
The new 911 RSR (2019 model year) celebrates its maiden WEC season. The vehicle from Weissach, which produces around 515 hp depending on the air restrictor, is based on the high-performance 911 GT3 RS road-going sports car. Compared to its extremely successful predecessor model, the car fielded in the GTE-Pro class of the FIA WEC, received improvements, most notably to areas such as driveability, efficiency, ergonomics and serviceability. About 95 percent of all components are new. The 911 RSR is powered by a 4.2-litre, six-cylinder boxer engine.

The schedule
The six-hour FIA WEC race in Austin takes off on Sunday, 23 February, at midday local time (7pm CET).

The race on TV and in the Internet
Round five of the FIA WEC will be televised in full length on www.sport1.de and www.motorsport.tv. Eurosport 2 broadcasts the entire race on free TV. On the pay-TV station Sport 1+ the race is aired live from 10pm to 1.30am. Sport 1 shows the final phase of round five live from 11.30pm. For a fee, the FIA WEC app offers live streaming and live timing.

Fritz Enzinger (Vice President Motorsport): “After the winter break, we’re looking forward to the second half of the WEC season. I hope we can continue our great performance from the first three races.”

Pascal Zurlinden (Director Factory Motorsport): “The new 911 RSR has already underlined its huge potential in this season’s WEC. We had a great start with a one-two and other podium results from the first three races. Unfortunately, things didn’t go so well for us in Bahrain, but we’ve done our homework and we’re heading to the USA full of optimism.”

Alexander Stehlig (Head of Operations FIA WEC): “Unfortunately, we lost our point advantage at the previous race in Bahrain and we’ve now turned from the hunted to the hunter. We’re happy to assume this role. We’ve had a good look at what happened in Bahrain and drawn our conclusions. We’ve implemented the lessons from the last race and will now tackle the rest of the season stronger. Austin has always been good turf for us so we’re looking forward to the upcoming race.”

Gianmaria Bruni ( 911 RSR #91): “It’s great to be back in America, especially Texas. Some parts of the track have been resurfaced and this is the first time we race the new 911 RSR at Austin. We’re expecting colder temperatures than in previous years. This presents interesting challenges for the team and the car.”

Richard Lietz ( 911 RSR #91): “We know the Circuit of the Americas from the past. I have fond memories of this great racetrack. The weekend will be interesting because some parts of the track have been repaved and we don’t know how the tyres and our new car will react to it. There are several unknowns, so we’ll be able to better assess our chances after the first practice session. Given that the new 911 RSR has performed well almost everywhere so far, I’m feeling very optimistic.”

Kévin Estre ( 911 RSR #92): “COTA is one of my favourite North American circuits. It’s very interesting, modern and demanding. The WEC was last contested here in 2017. At that time we managed to finish second. We were strong but our rivals were stronger. This year we hope to win with the new 911 RSR.”

Michael Christensen ( 911 RSR #92): “The winter break was long after Bahrain. I really enjoyed it and I took the opportunity to prepare for the rest of season. We are determined to show what we’re capable of in Austin. Before the upgrade of the track, some of the passages were very uneven. I’m excited to see how our tyres perform on the new asphalt.”

Matteo Cairoli ( 911 RSR #56): “My memories of Austin are not the best because that’s where I lost the Mobil 1 Supercup title in 2016. A year later we were running in the top three at a WEC race, but we couldn’t maintain the position due to problems with the drive shaft. For this reason, I hope we can bring home a good result this time.”

Matt Campbell ( 911 RSR #77): “This is my first race in Austin. I find the new challenge really exciting. The last races have been rather difficult. We had bad luck and a couple of things didn’t go perfectly for us. Hopefully that’ll change in Austin. I’m confident that we’ll achieve a good result there.”

Thomas Preining ( 911 RSR #88): “I look forward to working with Adrien again. We get along really well and it’ll certainly be a great weekend. This is my first time at Austin. I only know the circuit from television. Still, I have high hopes. I’m confident that our 911 RSR will perform well there.”