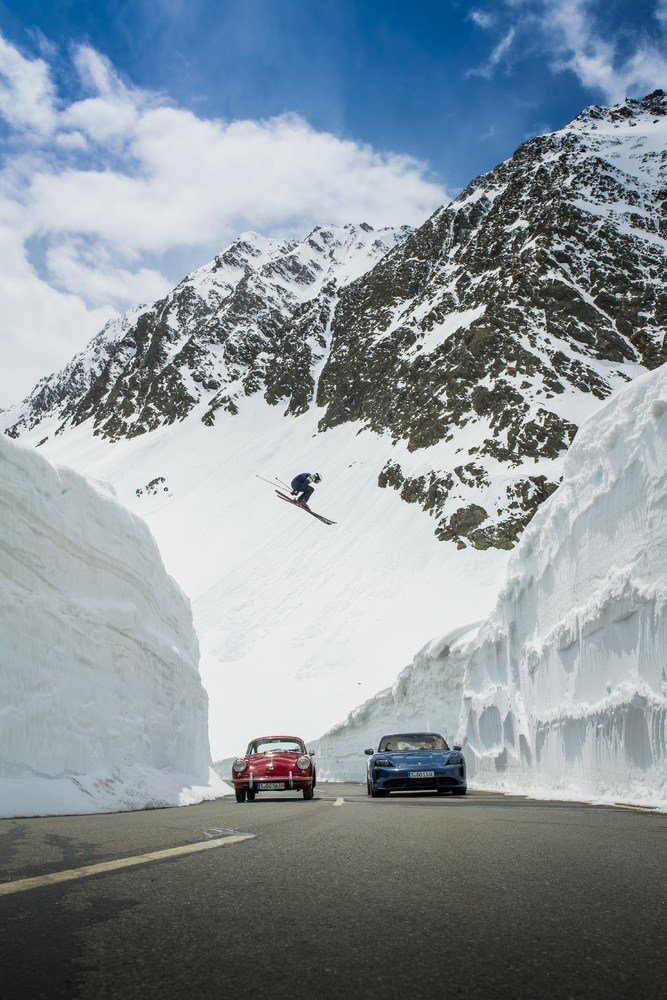 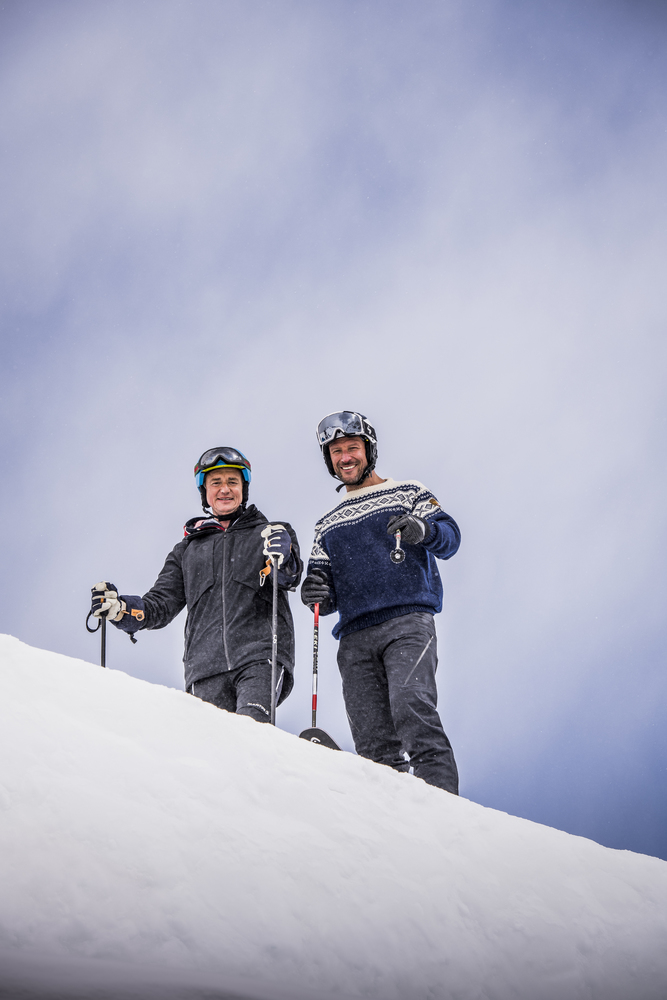 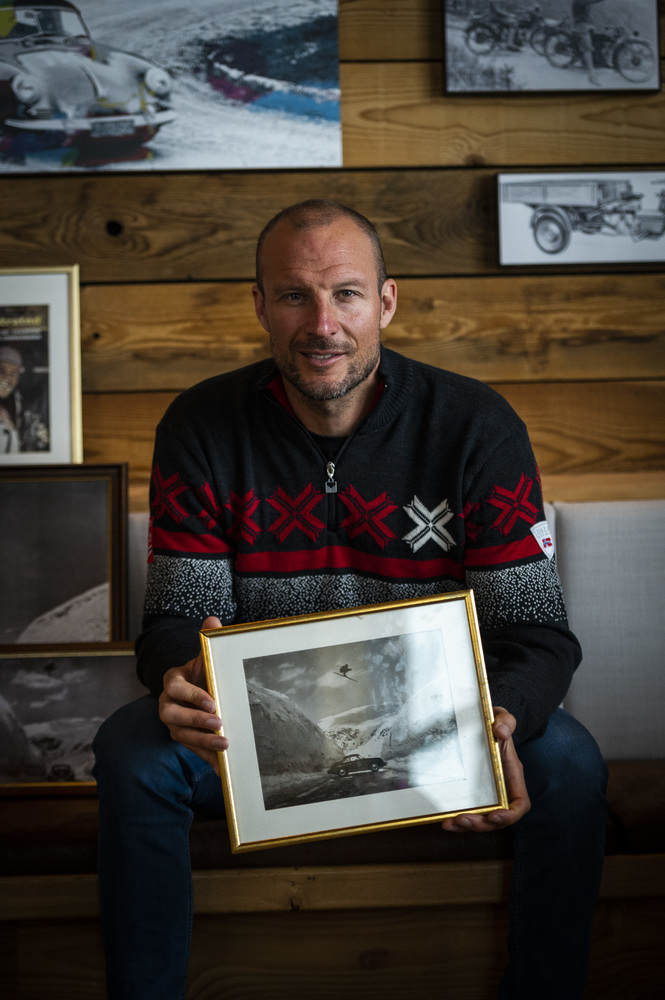 The Jump: The drive to keep pushing the boundaries New version a symbol of the courage to change

Stuttgart . Always taking that one extra step: has restaged the iconic photo of the 356 B model. The Jump shows two-times Olympic champion Aksel Lund Svindal ski jumping over a situated between gigantic walls of snow as high as buildings. The new version symbolises the mindset of the Stuttgart-based sports car manufacturer and indicates how interprets future viability - daring to try new things and boldly forging ahead, always trusting in itself to go that little bit further than others in order to discover the best solution.
“Aksel Lund Svindal and the stand for the same values as Egon Zimmermann’s jump over the 356 did in 1960: Athleticism, courage, joie de vivre - and of course with the most innovative sports car of its time. All of this is more important than ever for making a difference in the face of global competition,” says Lutz Meschke, Deputy Chairman of the Board and Member of the Board for Finance and IT at AG.

The photo of the jump over the is a modern reinterpretation of the historic black and white photo and presents a proud look back on the company’s impressive history. “It is a great honour for me to be able to repeat this iconic jump with and to give meaning to the story behind the photo. It’s important to have the courage to try new things,” says brand ambassador Aksel Lund Svindal.
The new image featuring the first all-electric sports car now gives ’s characteristic symbiosis of tradition and innovation added authentic symbolism. “With the new version we are continuing the story and building the bridge between yesterday, today and the innovations of tomorrow,” emphasises CFO Lutz Meschke.

At , a deep understanding of sports performance and the will to succeed have defined the mobility of the future from the very beginning. Seeking out competitive sporting challenges is an expression of the motivation to constantly improve through one’s own drive, while still preserving one’s own values and spirit. “The historic photo will always be celebrated and is part of ’s DNA. It is our job to respect the past, embrace the present and help shape the future - I also feel that this is sustainable,” says Svindal, who is from Norway.
“The image of the jump is also a metaphor for the risks you have to take in order to survive as a business. The Jump is a powerful symbol of the determination with which we at pursue our dreams,” adds Lutz Meschke, himself a passionate skier and sports fan.

The jump as a symbol of the opportunity to develop further
With a total of two Olympic victories, five world championship titles and further successes in the World Cup, Svindal is one of the most successful ski racers of recent decades. Through his impressive sporting career, he has learned to approach challenges with an open mind and to always focus on his strengths. “You always have to keep going. In racing, I have to constantly question myself in order to improve - otherwise I’d quickly be overtaken,” the brand ambassador emphasises.
Focusing on one’s own development is something Svindal also recognizes at . New ideas can help pave the way for the future. “If I want to race out front, I always have to take some risks, but I can’t get overconfident. That’s why it helps when people give me a different perspective on issues from time to time,” says the retired professional skier, who now works with start-ups.

In recent years, has steadily expanded its investments in start-ups and venture capital funds. The investments in new business areas provide important impetus for pooling knowledge and innovative technologies, as well as for working on completely new projects in the future.
“At , we do not rest on our laurels. We always want to dare to take the decisive step and see challenges first and foremost as an opportunity for further development,” says Meschke. “That’s what drives us.”

The company is underlining its distinctive approach with the new Mission R sports car study. The new project marks the next bold step towards tangible innovative power and demonstrates the importance of motor racing as a platform for developing new technologies. The study was recently presented to the public for the first time at the IAA Mobility 2021 in Munich.

Limited edition art print: The story behind The Jump
The Stuttgart-based sports car manufacturer is the platform on which performance, passion and pioneering spirit become a unique experience. The Jump is also a tribute to the iconic original of photographer Hans Truöl and skier Egon Zimmermann, who jumped over the ruby 356 B. The black and white photo has the ironic subheading “On taking a shortcut” which was taken right after the Flexen Pass near the Austrian ski resort of Zürs was cleared of an avalanche. To mark the release of the new version, the Museum will design two high-grade art prints. The reproduction combines the historic image with the reinterpretation and will be available as a set from the Online Shop at the end of 2021.
The Jump also reveals some parallels on a sportive level: Svindal and Zimmermann are both Olympic champions in downhill skiing who wore the same competition number during their greatest sporting success. “I knew Egon personally and also feel connected to him because we both had competition number 7 when we won the Olympics. It was my turn a mere 54 years later in 2018,” says the Norwegian sports car enthusiast.

The black and white photo “Der Sprung” is probably the most famous work of Hans Truöl, who specialized in news reporting and winter sports photography throughout his life. Truöl was born in Augsburg on 26 June 1920 and died in 1981.
Egon Zimmermann was born in Lech, Austria, on 8 February, 1939. A trained chef, he started skiing at the age of six and became world champion in the giant slalom in 1962. He followed that two years later with an Olympic victory in downhill skiing at the 1964 Winter Games in Innsbruck. Zimmermann passed away in his home town in 2019.

Christophorus issue 400: The Jump - as an artistic cover image
The 400th issue of the company magazine Christophorus, which will be published in September, is also devoted to the Jump. US designer Jeffrey Docherty has designed the cover of the anniversary issue with a graphic adaptation of the Jump photo. In the magazine, readers can learn how Docherty went about creating this and the various designs he tried out in the process.
The spectacular action of the Jump in the Austrian Alps is also presented in a special report. And 9:11 magazine offers a look behind the scenes as well. The episode, which also appears in September, presents impressive and emotional video footage of the jump and lets the protagonists have their say both in front of and behind the camera.