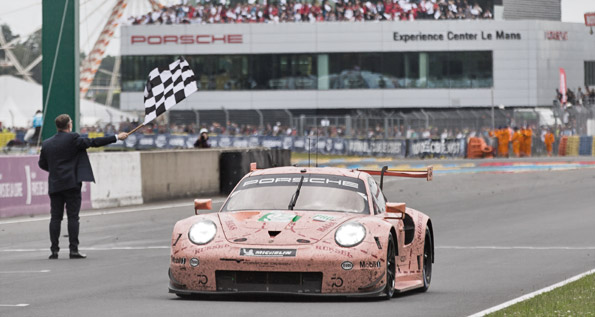 Stuttgart. has once again made history and won both GTE classes at the world’s toughest long distance race. In the pro-category, the 911 RSR with the starting number 92 concluded the 86th edition of the Le Mans 24 Hours in first place after 344 laps. The driver trio Kévin Estre (France), Laurens Vanthoor (Belgium) and Michael Christensen (Denmark) held the lead for almost the entire distance and controlled the race on the tradition-steeped 13.626-kilometre racetrack. The works drivers crowned their flawless performance with class victory number 106 for .

The sister car (#91) shared by Richard Lietz (Austria), Frédéric Makowiecki (France) and Gianmaria Bruni (Italy) perfectly rounded off the double victory for in the GTE-Pro class. Frédéric Makowiecki provided a special highlight. The Frenchman fought an epic duel with a competitor for an hour and a half, fending off all attacks to claim second place. With these two triumphs at the 24-hour marathon in France, has extended its lead in the drivers’ and manufacturers’ classifications of the FIA WEC world championship.

Technical problems with the #93 nine-eleven threw the car far behind during the night. Patrick Pilet (France), Earl Bamber (New Zealand) and Nick Tandy (Great Britain) lost 25 minutes due to repairs and ultimately finished on eleventh. For Romain Dumas (France), Timo Bernhard and Sven Müller (both Germany), the race was over after seven hours. Their car (#94) retired in the night with suspension damage.
The #77 fielded by Dempsey-Proton Racing celebrated an impressive win in the GTE-Am class. Putting in an inspired drive, Young Professional Matt Campbell (Australia), Christian Ried (Germany) and Junior Julien Andlauer (France) notched up the 107th class win for . At just 18 years of age, Julien Andlauer has become the youngest class winner at Le Mans.

While the second car fielded by the Dempsey-Proton Racing team (#88) was sidelined with suspension damage, the 510 hp 911 (#99) run by Proton Competition narrowly missed out on a podium spot in fourth place. The 911 RSR with the starting number 80 (Ebimotors) and 56 (Team Project 1) finished the Le Mans 24-hour marathon on sixth and seventh respectively. The vehicle campaigned by Gulf Racing (#86) was relegated to the back of the field at the beginning of the race after becoming entangled in an accident caused by another competitor. Pulling out all stops, the team fought their way back up the order to finish on tenth.

Full results are available on fiawec.alkamelsystems.com

Dr Wolfgang , Chairman of the Supervisory Board: “An absolutely perfect weekend for . You can’t wish for more than this in our anniversary year. It’s impossible to plan such a thing, but when it happens it’s an indescribable feeling. Congratulations to the drivers, the teams and all the employees who made this success possible. It makes me very proud.”

Oliver Blume, CEO of Dr. Ing. h.c. F. AG: “We prepared meticulously for this race and have worked towards this for months. The entire team did a perfect job. We’re incredibly proud of this double victory in the GTE-Pro class and of winning the amateur classification. This is a fantastic achievement from our employees. belongs to Le Mans and Le Mans belongs to .”

Michael Steiner, Research and Development at : “The 911 is and remains the best sports car in the world – it’s a true racer. It doesn’t get better than scoring a double victory in the GTE-Pro class and victory in the GTE-Am class on our 70th birthday. This year we’re back at the front and that’s where we belong.”

Dr Frank-Steffen Walliser, Vice President Motorsport and GT Cars: “It’s a sensation. What a crazy fight out there on the track and a flawless performance from the team. That was an incredible feat, which we ultimately turned into a deserved victory. The class wins are a perfect gift for our 70th anniversary. The fact that we earned maximum points towards the world championship rounds off the whole result. Now the suspense has turned to joy.”

Pascal Zurlinden, Director GT Factory Motorsport: “We got a perfect lap in qualifying and the result of today’s race has crowned a perfect weekend. Victory in the GTE-Pro and GTE-Am class underlines that we’re doing everything right at in both factory and customer sport. We were able to extend our lead in the manufacturers’ classification and we also moved into the lead of the drivers’ category. All in all, a perfect day.”

Kévin Estre ( 911 RSR #92): “It’s simply unbelievable. I just can’t describe my feelings. Today is the best day of my life. We have won the world’s most difficult and wonderful race. That can’t be put into words.”

Michael Christensen ( 911 RSR #92): “It was an incredible race, I don’t know what to say. The car was fast right from the start. We had a little luck during a safety car phase and we managed to pull clear of the field a little. From that point on we focussed on extending our lead. In the final third of the race we simply tried to avoid taking any risks and bring the car home safely. This worked perfectly.”

Laurens Vanthoor ( 911 RSR #92): “Today is one of the most beautiful, no, the most beautiful days of my career: I’ve won Le Mans. I can’t describe my emotions and I still can’t believe it. Kevin, Michael and I complemented each other perfectly. The entire team was just brilliant today.”

Frédéric Makowiecki ( 911 RSR #91): “Our car was very fast, but we simply couldn’t keep up with our sister car, which was incredibly consistent. For over an hour I battled hard with a competitor for second place. That makes my job as a race driver really fun, but we couldn’t make up ground in this phase. I’m thrilled for the team with our second place at Le Mans. We’ll be back next year to fight for victory.”

Gianmaria Bruni ( 911 RSR #91): “This double victory is fantastic – for and our team. We had a great race and a great fight with our #92 sister car. We tried everything but our team colleagues didn’t make any mistakes and they deserve this win.”

Richard Lietz ( 911 RSR #91): “Today is a banner day for – this double win is a wonderful gift for the 70th anniversary. It was a great race, and it doesn’t get much better than first and second place. This shows that GT racing is the future and we need to invest in it.”

Nick Tandy ( 911 RSR #93): “It’s disappointing, of course, not to be further ahead. But we accept the good races with the bad. It was great to see that our car’s pace was good and we could match the frontrunners. Unfortunately, technical problems threw us back considerably. It just wasn’t our race this year.”

Earl Bamber ( 911 RSR #93): “Unfortunately we lost precious time swapping out an alternator and we couldn’t regain that time. But I’m really pleased for Laurens Vanthoor. We share a cockpit in the IMSA Weathertech. In two weeks, two Le Mans winners will climb into the cockpit at Watkins Glen.”

Patrick Pilet ( 911 RSR #93): “It was a difficult race. At times we were running with the leaders and had a very fast car. But a technical problem then threw us down the field. We were determined to finish the race and we finished on eleventh. But that’s how it is at Le Mans. We’ll try again next year.”

Jörg Bergmeister ( 911 RSR #56): “We experienced a race of mixed fortunes. At one point things looked really promising for us and we were within striking distance of second place. However, unfortunately we were hampered by brake problems towards the end of the race and fell back. But we’ve gained a lot of valuable experience, which will help us in the future.”

Julien Andlauer ( 911 RSR #77): “At 18 years of age I was given the chance to contest Le Mans for the first time and then we won. I’m very proud of the whole team and I can’t really believe it yet. Now I’m the youngest Le Mans winner, incredible.”

Christina Nielsen ( 911 RSR #80): “Sixth place is a very good result, because this was our first time at Le Mans. We worked hard and made very few mistakes. I’m very proud of the whole team. We will improve and hopefully be back next year to compete.”

Ben Barker ( 911 RSR #86): “Unfortunately we couldn’t bring home the result we wanted after 24 hours. The car was very fast over the entire race distance, even after our accident. The team did a brilliant job and made no mistakes. The accident at the start was simply bad luck.”

Matteo Cairoli ( 911 RSR #88): “I’m very disappointed that we retired. The suspension broke and I couldn’t save the car unfortunately. It was a blessing in disguise that it didn’t happen in a high-speed passage on the track. Then things could have been a lot different.”

Patrick Long ( 911 RSR #99): “It was great fun driving the car here. I particularly enjoyed the night stints. The lights on the new 911 RSR are a great development. We’re very pleased about our sister car’s victory in the GTE-Pro class.”

Patrick Dempsey, co-owner Dempsey-Proton Racing: “I’m lost for words. Everyone did a fantastic job, it was a victory for the whole team. The race was incredible, we made no mistakes and our work was rewarded with this great success. I can’t tell you how incredibly proud and happy I am for , too.”