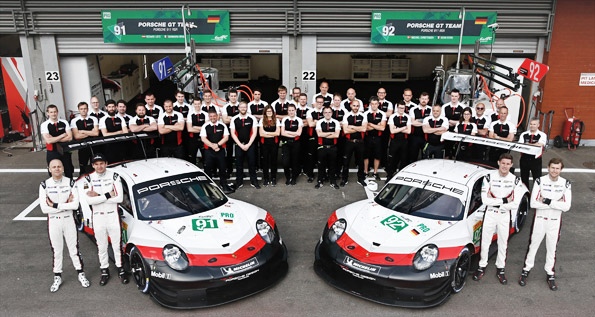 Stuttgart. As the 911 RSR rolls on to the grid at Spa-Francorchamps (Belgium) on May 5, 2018, it begins its second season in the FIA Sports Car World Endurance Championship. The model has already notched up two race wins in North America, as well as the North American Endurance Cup (NAEC), which includes the prestigious endurance races at Daytona, Sebring, Watkins Glen and Road Atlanta. However, there is one thing still missing from resume of the most sophisticated 911 ever: a world championship title. Exactly one year later, at the penultimate round of the 2018/2019 Super Season, this major goal is ticked off.

Scoring positions third and eighth from the six-hour race at Spa-Francorchamps (Belgium), has claimed an early world championship title win in the GTE-Pro class of the World Endurance Championship WEC. Now with 246 points, the sports car manufacturer from Weissach heads to the final round of the 2018/2019 Super Season at Le Mans holding an unassailable lead in the manufacturers’ championship.

The highlight: Double victory at the 24 Hours of Le Mans

Clinching a double victory at the 24 Hours of Le Mans in June 2018, impressively underlines its title aspirations. At the long-distance classic in France, the two ca. 510 hp 911 RSR from the WEC turn up sporting the legendary “Rothmans” (No. 91) and “Pig” (No. 92) designs, thrilling fans not only from a sporting perspective but on an emotional level as well. Michael Christensen from Denmark and his two factory driver teammates Kévin Estre (France) and Laurens Vanthoor (Belgium) score a commanding victory in the fiercely competitive field of manufacturers in the GTE-Pro class. Their colleagues Gianmaria Bruni (Italy), Richard Lietz (Austria) and Frédéric Makowiecki (France) put the icing on the cake for with second place. The enormous potential of the 911 RSR is clearly evident, particularly in qualifying. Lapping the track in 3:47.504 minutes, Bruni sets a convincing new lap record for GTLM vehicles.

At the 2018 season-opening round at Spa-Francorchamps, the factory squad Manthey Racing lays the foundations for the world championship title: With Estre/Christensen finishing on second, and Bruni/Lietz on fourth, takes the overall lead. After scoring a double victory at the Le Mans 24-hour race, a strong race at Silverstone (Great Britain) follows. While Bruni/Lietz are removed from the standings after round three of the season after initially ranking second, the No. 92 car earns important points towards the world championship with position three. After round three, the lead in the overall standings is now 36 points. The driver pairing Estre/Christensen follows up with another win at Fuji (Japan), with both 911 RSR finishing on the podium at Shanghai (China). At the first WEC race at Sebring (USA) since 2012, Bruni/Lietz celebrate their first joint victory. The lead over the opposition has now increased to 100 points. As usual, the GT Team easily wins the match point at Spa.

The secret to success: Teamwork at the highest level

“I’m immensely proud of the entire team,” says Fritz Enzinger, Vice President Motorsport. “The Manthey Racing squad are highly professional, exceptionally success oriented and always make time for some fun, which in turn has a positive effect on the team structure and performance. To be so successful in the face of such tough competition between factory teams is always the result of hard and consistent work. Pascal Zurlinden and all his colleagues have found the perfect recipe.” The factory squad is made up of around 30 highly qualified members of the racing operation. “I can only reiterate Fritz Enzinger’s praise,” declares Pascal Zurlinden, Director GT Factory Motorsport. “The team structures are modern and ideally tailored to highly competitive motor racing and the drivers make the best use of the potential. And confidence increases with each success. This is always a decisive factor in sport.”

In the Sports Car World Endurance Championship (WEC), which was first contested in 2012, sports prototypes and GT vehicles compete in four classes: LMP1, LMP2, GTE-Pro and GTE-Am. They all compete together in one race but are classified separately. The GT Team contests the GTE-Pro class, while the customer teams Dempsey Proton Racing, Project 1 and Gulf Racing fight for honours in the GTE-Am class.

During the first six years since the foundation of the WEC, a classic race calendar applied, with the start of the season in spring and the final round in early winter. 2018 heralded a major change. The 24 Hours of Le Mans in June is the new season finale. To implement this change to a “winter calendar”, FIA chose a so-called Super Season as a transitional model. Eight races are contested from May 2018 to June 2019. The special feature: The Le Mans classic and the six-hour race at Spa-Francorchamps are held twice during the Super Season. The following season begins at Silverstone in September 2019 and ends in June 2020 with the 24 Hours of Le Mans.