Perfection sounds just right in a . The acoustic proof is delivered by the audio systems available for all model ranges—Base, , and —a triad in B-flat major composed by . The ear can choose between a standard, premium, or high-end acoustic experience. A brief primer on sound for music-lovers who love to drive s.

The electronic beat fills the interior of the 911 and begins the sprightly duel. What Switzerland’s duo Yello, celebrated 1980s avant-gardistes, conjured up out of synthesizers, voice, and instruments back in the day puts speakers, membranes, and amplifiers to the test. The system has to deliver what the sound promises. And in the case of Yello, that’s quite a tall order in terms of audio technology. The Swiss band’s music made it onto the big screen and prime-time TV on Miami Vice. Wild driving in pursuit of notorious drug dealers was a staple on the legendary TV series. And the beat went on through it all.

That’s how it should be in everyday life. To ensure a fulfilling sound experience, driving sounds and the music can’t be at cross purposes, which creates a technical challenge with a highly emotional component. “What we do here is not just a job,” says Mathias Renz. The engineer heads the Development Electrical/Electronics – Audio/Acoustics department, in which eight employees, as Renz puts it, “concern themselves with music far beyond the call of duty.”

Development engineer Simon Bender, for example, moonlights as a keyboardist in several bands, time permitting. Mathias Renz ensures great sound at the mixer. And Stephan Bayer sets the pace on the drums. According to the director for sound reproduction, “The biggest challenge is to give the sound in the vehicle the desired room-filling quality.”

When you talk with a sound expert, you’re essentially talking to two people. One is the technician who measures frequencies, and then there’s the music-lover who trusts his ear. “In the end,” concedes Stephan Bayer, “it’s often the ear that decides it. The customer doesn’t measure anything. He just listens.” Of course, now we’re moving in the gray area of personal tastes, but there are parameters that you just can’t avoid. 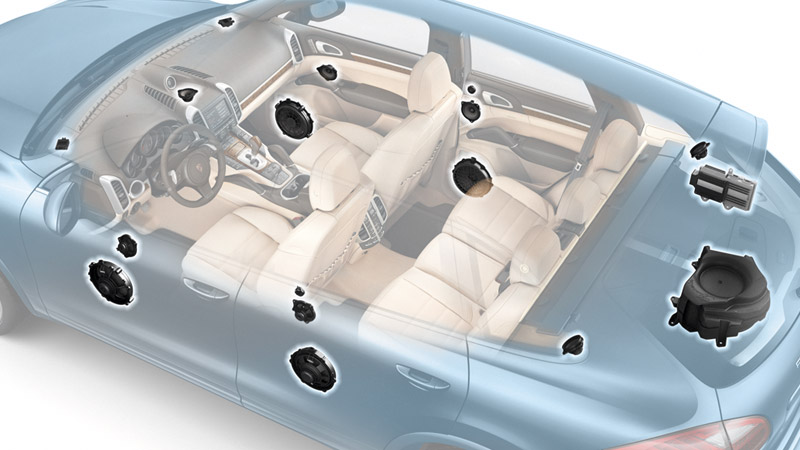 An atmosphere recalling the concert hall: The system in the has sixteen speakers

Fundamentally, the same quality principle applies to audio systems as to engines. Even the Basic version has to be first-class. And everything that changes the characteristics after that requires more than just a boost in watts, the audio equivalent of horsepower. What’s more, all three sound systems are fine-tuned to harmonize with the different models. This applies, for one thing, to the basic technical setup—after all, the interior requirements in a 911 are different than those of a . Yet the sound experts also endeavor to strike the right tone for the character of the model. Renz explains, “The system in a can have a somewhat more aggressive setup, while in the big we aim more for refinement.”

The sound quality of an audio system depends on more than just the speaker output—in fact it’s much more the result of a complex overall concept—so strives to create the optimal conditions, starting with the design of the bodyshell. That involves, among other things, a meticulous focus on the weight of the sound system components. But above all, the challenge is finding the space, in the right places, to mount the speakers and nip any potential vibrations in the bud. Listening and driving pleasures should not be in competition.

The basic sound in a 911, for example, comes from a system with an amplifier under the passenger seat and nine speakers distributed throughout the interior that weigh a total of just 3.4 kilograms. The 235 watts make for a full, dynamic sound. It’s fun to hear music that way. Even if you turn it all the way up—which is by no means necessary—you won’t reach the system’s limits, no matter what kind of music is on the dial.

But there are other alternatives. For years the specialists from Weissach have been crafting the premium sound with the audio experts from . The optional system features a bodyshell subwoofer, for example—one of those extravagant ideas that hardly weigh a thing and take up no space. The 100-watt component for the deeper tones is located in a strategically clever spot up front in the cowl panel, utilizing otherwise unused space to emit sound in front of the occupants. Together with a total of twelve speakers (in the 911), the result is powerful bass with room-filling sound and thorough enjoyment. Even for drivers of convertibles. With the top down and a fair bit of speed, wind and driving noise are certainly more noticeable. Still, the system effortlessly makes itself heard. Renz notes, “With the system, you’ve always got ample reserves.” 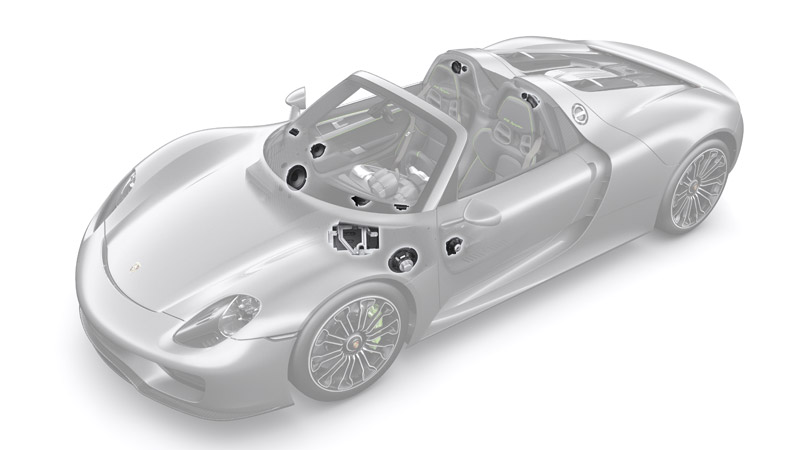 Standard high-end sound in the 918 Spyder: system with eleven speakers

With the high-end Surround Sound System from the Berlin-based masters at , you don’t have to crank up the volume to experience full sound. Together with Dieter , has managed to unpack the inimitable sound of the world-renowned audio systems for the home in the comparatively tight space of a vehicle interior. Depending on the model, over 1,000 watts are on the job. Highly dynamic, highly emotional, extremely precise, and an unbelievable bass—the system captures every sound.

Start with a 300-watt, die-cast aluminum subwoofer with a fiberglass cone integrated in the bodyshell. The Air Motion Transformers (AMTs) for the higher tones with a 28-square-centimeter membrane—important for optimal high-frequency reproduction—are taken directly from the B100 reference speakers. Every speaker (sixteen of them in the ) has its own output stage in the amplifier. This high-end approach enables the highest degree of sound fidelity and optimal fine-tuning to the interior space. “The special thing about the system is that in spite of the high degree of technological sophistication, you don’t hear a technical system but just pure music,” says Stephan Bayer.

offers the driver four different listening experiences. The “Smooth” function is designed for relaxed, pleasant listening, especially on long drives. “Surround” provides room-filling, imposing 360-degree sound. “Live” makes you feel like you’re in the middle of a concert. And “Sound Conditioner” maintains the sound you’ve set irrespective of your driving style. The frequency range of the system goes from 35 hertz (ultralow bass, more felt than heard) to 20 kilohertz (finest highs), on the very frontiers of what the human ear can perceive. 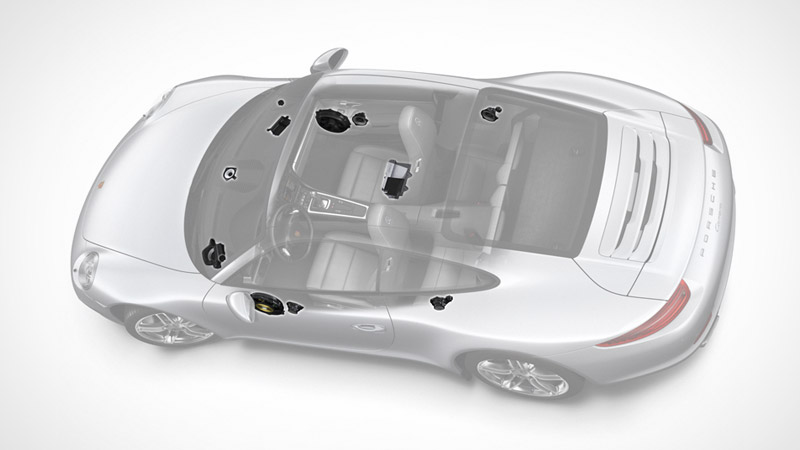 sound in the 911: Twelve speakers including bodyshell subwoofer for 445 watts of output

Whether laid-back listening, full power, or a concert atmosphere is what you’re after, the music specialists in Weissach fine-tune every system for weeks, and test the results in the sound lab. They’re proud of their magnificent sound, but they’re not about to rest on their laurels. “We’ll continue to tinker with the spatial listening experience,” says Renz, “more advancements are on the way.” Hear, hear!