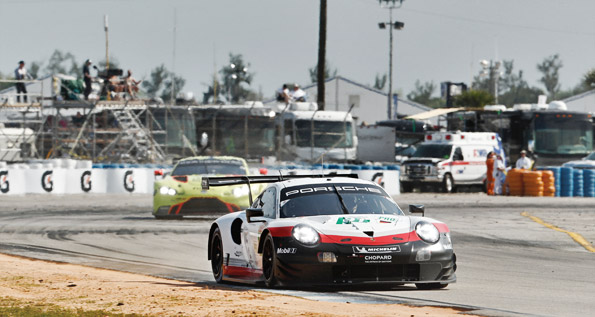 Stuttgart. Scoring a win at the 1,000-mile race in Sebring (USA), has increased its lead in the Sports Car World Endurance Championship (WEC). Gianmaria Bruni (Italy) and Richard Lietz (Austria) finished round six of the WEC in Florida in first place with the No. 91 911 RSR. Their works driver colleagues, Kévin Estre (France) and Michael Christensen (Denmark), achieved fifth place in the ca. 510-hp sports car from Weissach. After the sixth of this season’s eight races, the duo in the No. 92 car holds a clear championship lead. In the manufacturer’s classification, has succeeded in further extending its top position. In the GTE-Am class, the Dempsey Proton Racing squad notched up its second straight win.

The Sebring race, which was capped at eight hours, on the 6.02-kilometre circuit ran without incident over long stretches for Bruni and Lietz. Thanks to flawless drives, good tactics and perfect teamwork, the No. 91 911 RSR was running in second place. When rain set in about 25 minutes before the finish, making an additional pit stop necessary, the Manthey-Racing factory crew did a perfect job and ensured that the car driven by Bruni and Lietz moved into the lead. With this, the winning driver squad have improved their ranking in the championship and moved up to second place. Their world-championship-leading teammates experienced a race of mixed fortunes. Estre was unable to defend his pole position after the start, collided with an opponent in the ensuing chase and was thrown far down the field by a stop-and-go penalty. The few overtaking manoeuvres possible on this infamously bumpy track hampered him from catching the leading pack. Rain in the closing phase did not change this situation.

Fritz Enzinger (Vice President Motorsport): “I’m totally delighted. After clinching pole position in both the WEC and IMSA and now winning the first of two races in Sebring, and in such difficult conditions in the closing stages – you don’t get it better than this. I’m also very proud of our customer teams who did brilliantly in the GTE-Am class. Now we face the IMSA twelve-hour race, which we also take up from pole position. It can continue exactly as it has been.”

Pascal Zurlinden (Director GT Factory Motorsport): “What a perfect day. First pole position in both series, now victory at the 1,000-mile race – it doesn’t get better than this. At the last pit stop in the rain, our team did an immaculate tyre change and, with the better strategy, managed to make up more than five seconds over the previously leading BMW. Congratulations to the mechanics – they made this victory possible. A one-two result would also have been possible today. Unfortunately a penalty threw our number 92 car down the field. Still, we’ve extended our lead in the world championship and we’re extremely pleased.”

Gianmaria Bruni ( 911 RSR #91): “It’s a fantastic result for us drivers and for . The way the team managed to catapult us to the front at the last pit stop was simply sensational. This shows just how special our crew is. The fact that we were able to win the 1,000-mile race at the return of the WEC to Sebring is incredible. For me personally it’s even more special: it’s the first time I’ve won a race for . That means so much to me.”

Richard Lietz ( 911 RSR #91): “The rain at the end was a blessing. Gimmi managed to keep the car steady on the wet track, and the team worked at lightning speed. That was the decisive factor in the race. Everything ran perfectly for us. I’m totally over the moon with my first win of this season.”

Kévin Estre ( 911 RSR #92): “What a huge race. Our car was really strong, but unfortunately we didn’t get ahead because of an incident. I was locked in a fight with an Aston Martin and had the better line out the corner and wanted to go for it. I touched him slightly and he spun – my mistake. The penalty cost us a possible victory and many points. It’s not the end of the world, but it’s still a shame.”

Michael Christensen ( 911 RSR #92): “Congratulations to Gimmi and Richie on their victory. Obviously I would have liked to stand at the top of the podium, but you can’t always win. The situation still looks good for us in the series. We travel to Spa as the leaders of the world championship.”

Jörg Bergmeister ( 911 RSR #56): “We’ve cut our loses – very successfully. By scoring third place we’ve defended our lead in the championship and that was our main goal. Our car was strong in the race, although the balance was off due to a collision that wasn’t our fault. We made the best out of these circumstances.”

Matt Campbell ( 911 RSR #77): “The conditions were really tricky towards the end, but we still managed to bring home the victory. I’m really relieved because things can quickly go wrong in the rain. At the end of the day it’s a perfect result and a banner day for . To win at Bathurst and Sebring within just six weeks is truly amazing.”

Thomas Preining ( 911 RSR #86): “What a turbulent race. Our car was fast and fantastic. I’m a little torn, because on one hand I was really fast in my last stint and overtook two competitors. But on the other hand my decision to come in to the pits was too late. That again cost us a bit. A podium result would definitely have been possible.”

Matteo Cairoli ( 911 RSR #88): “I had a lot of fun driving and our 911 RSR handled the circuit beautifully. However, we didn’t really make the most out of our opportunities and that’s a pity. More would have been possible. I hope that things go better at the next race.”