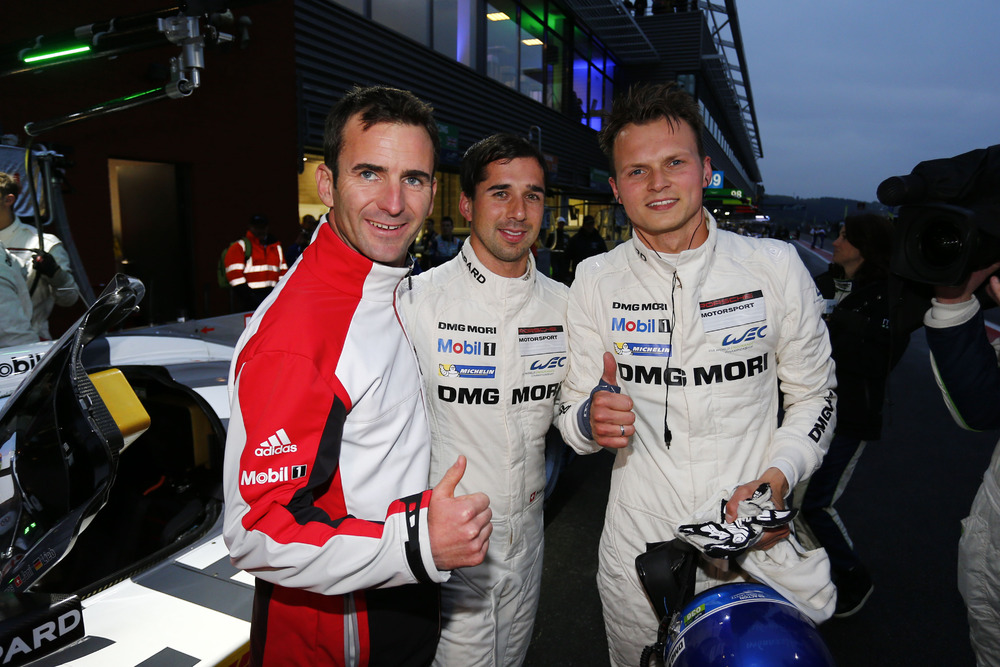 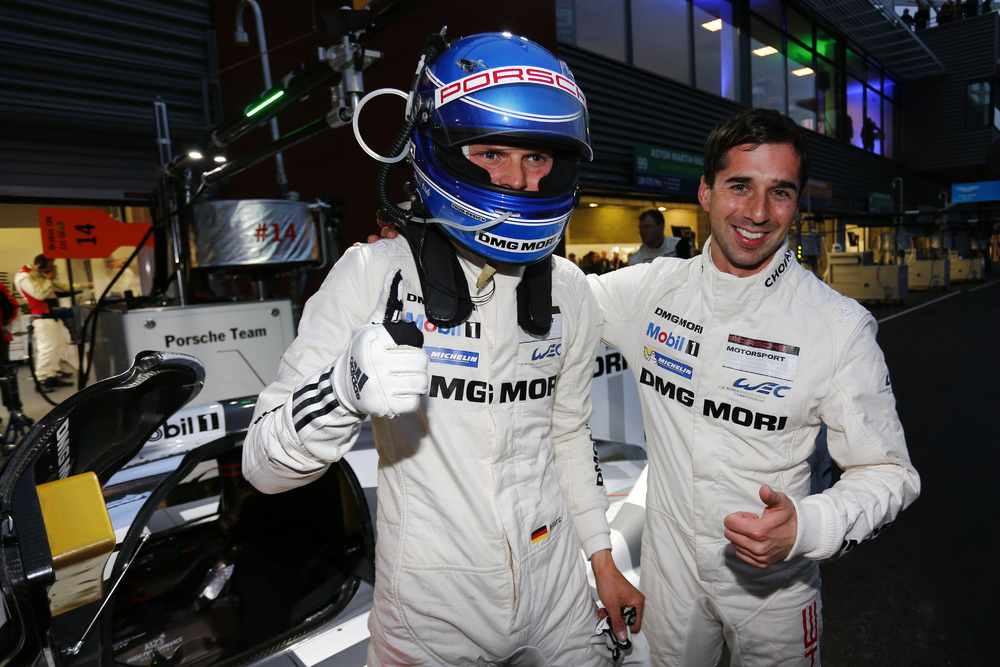 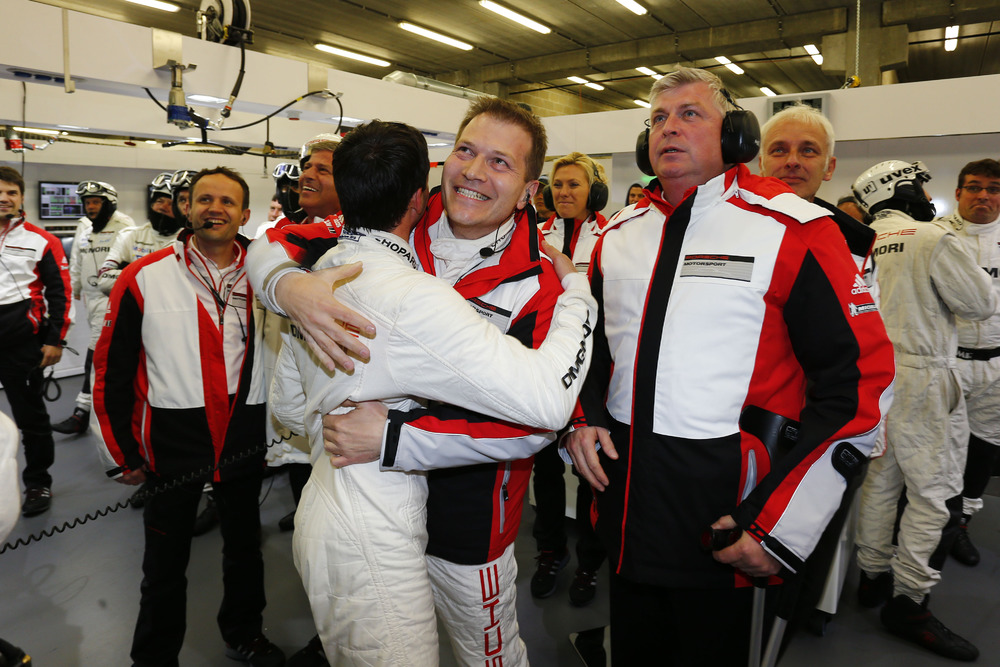 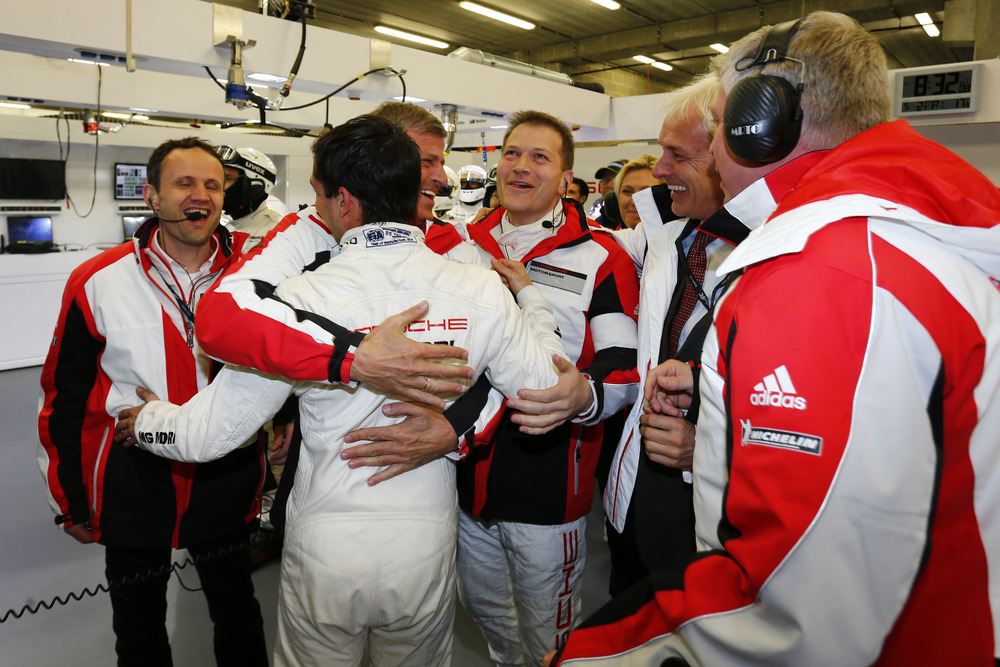 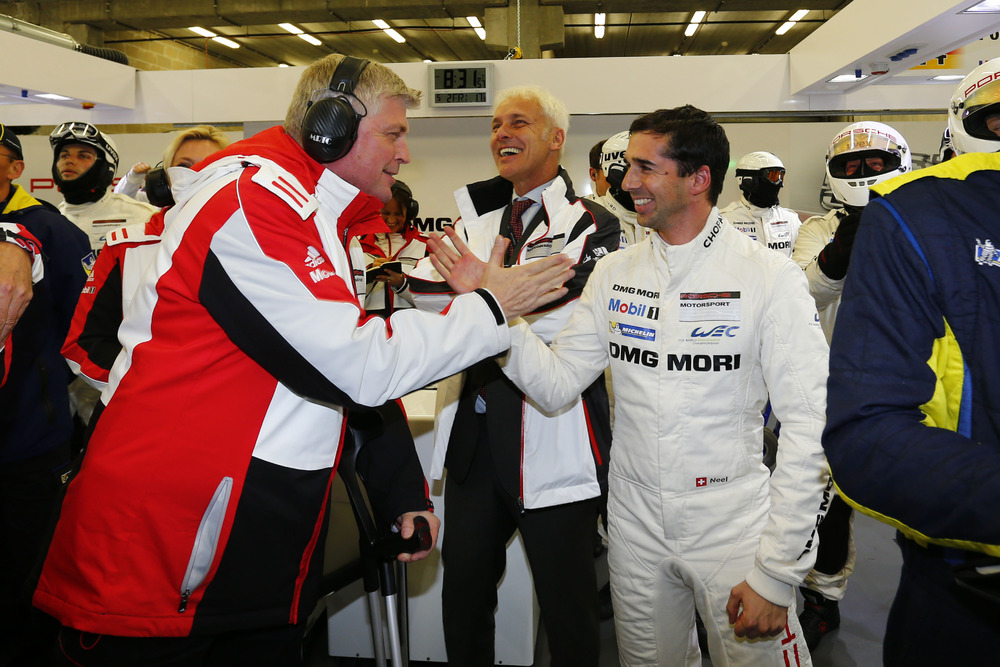 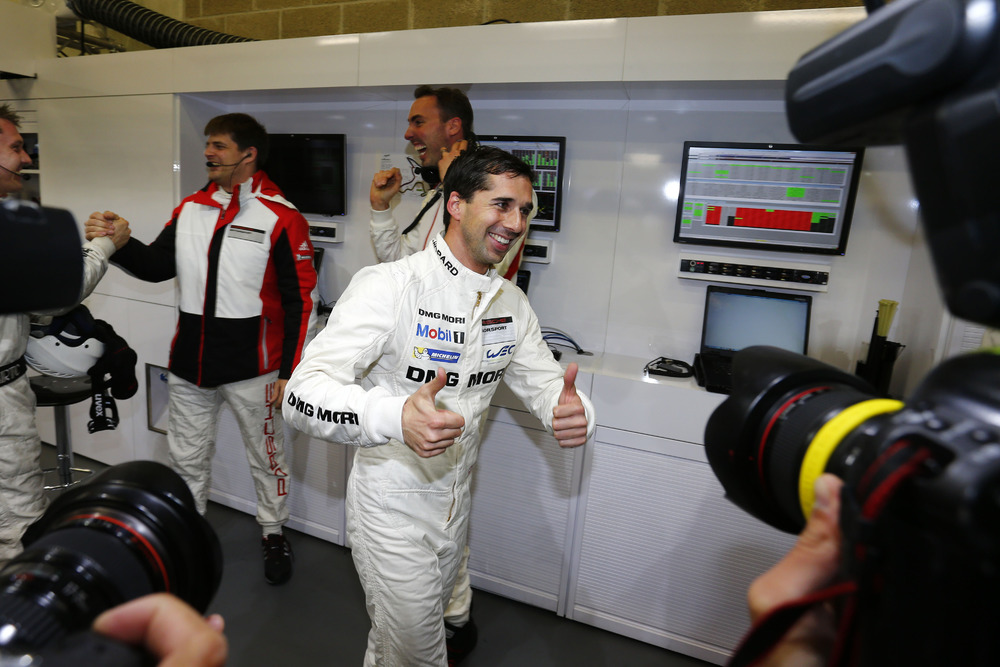 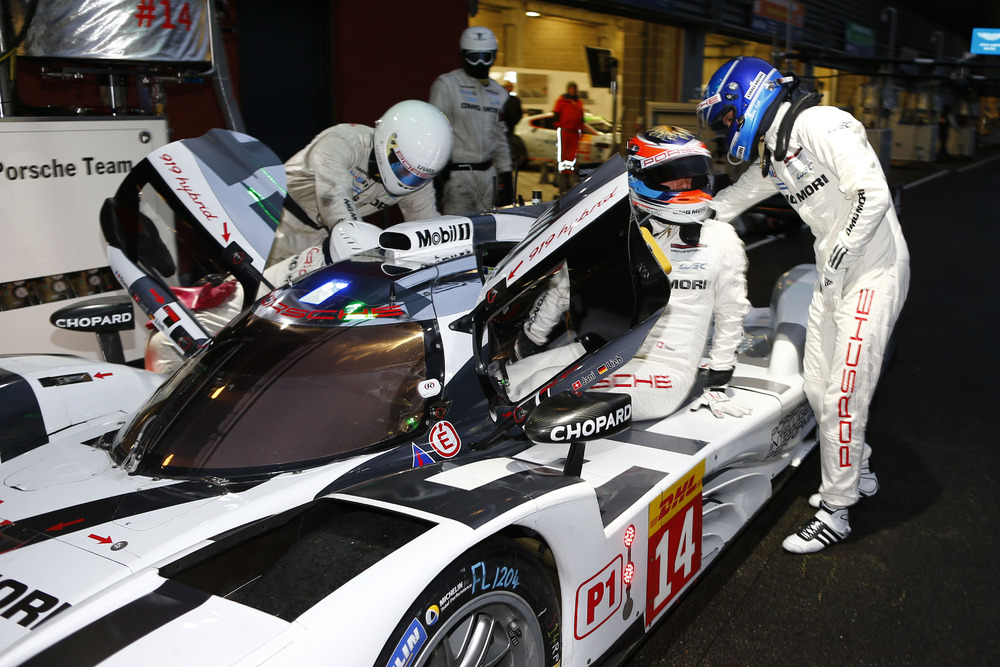 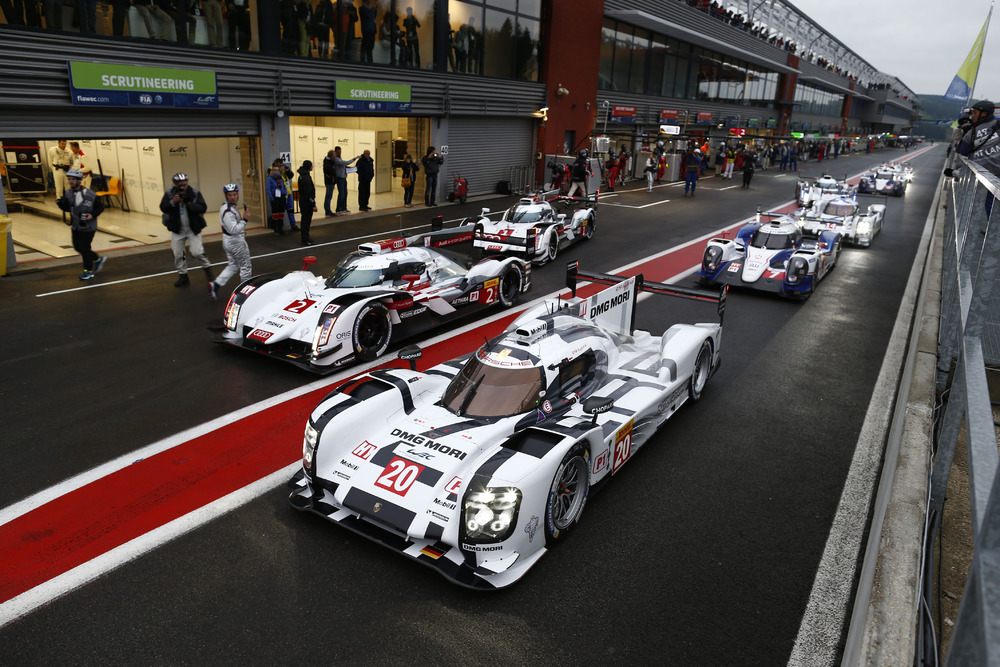 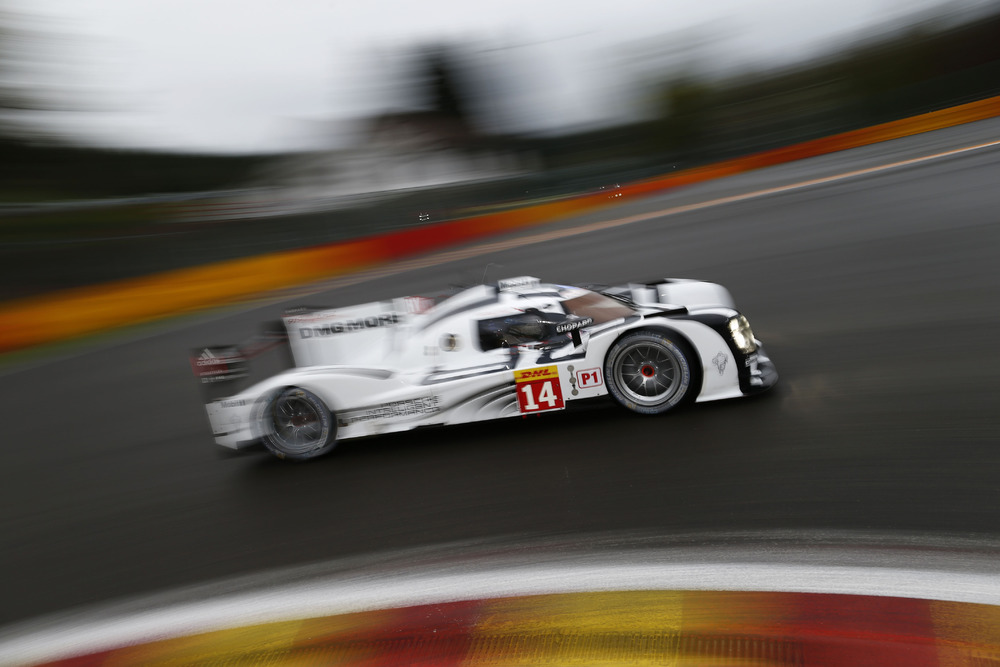 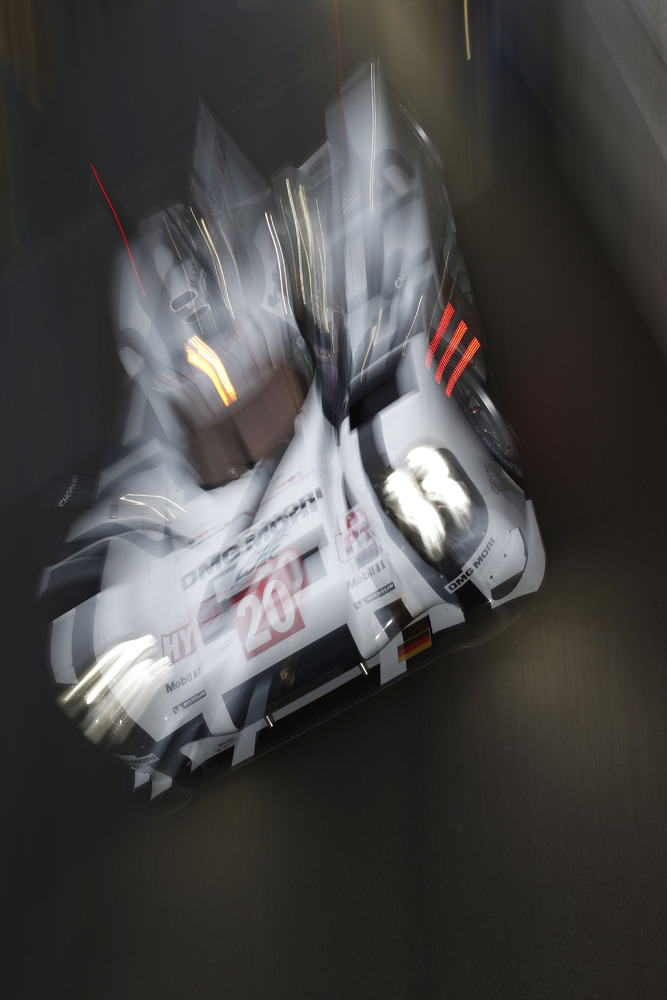 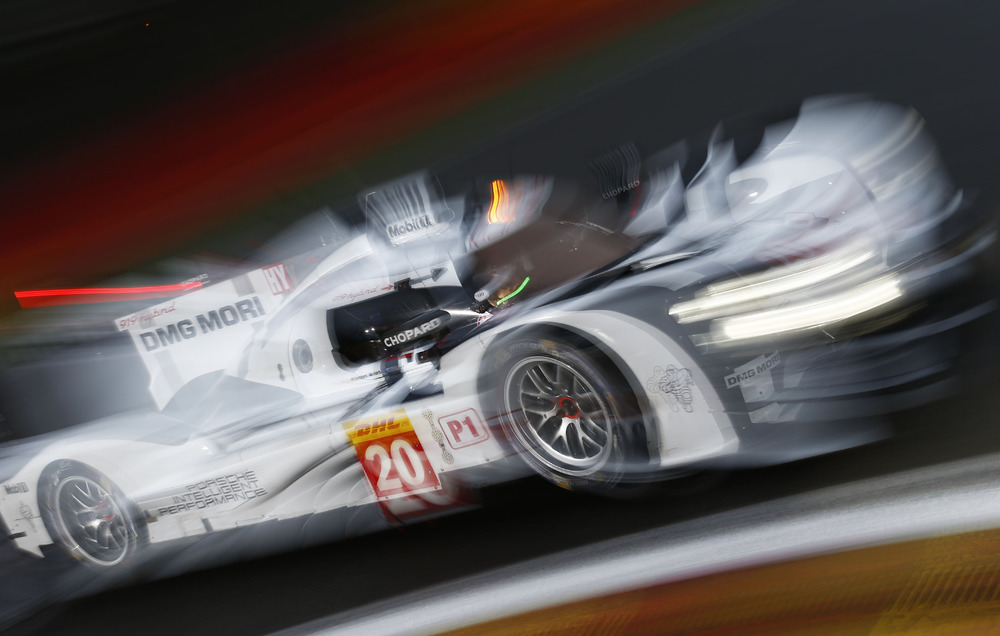 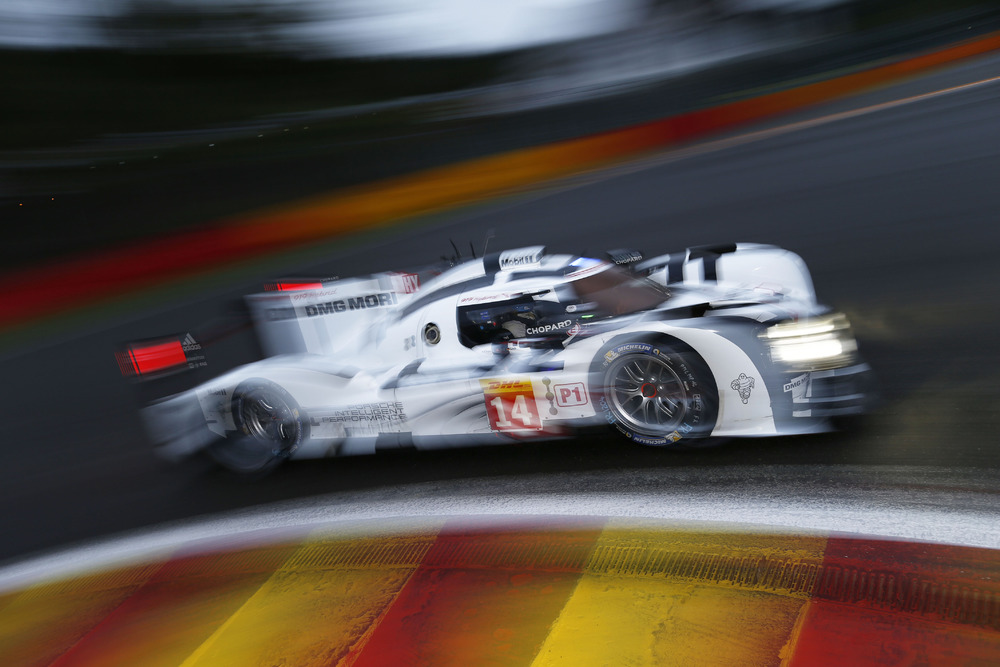 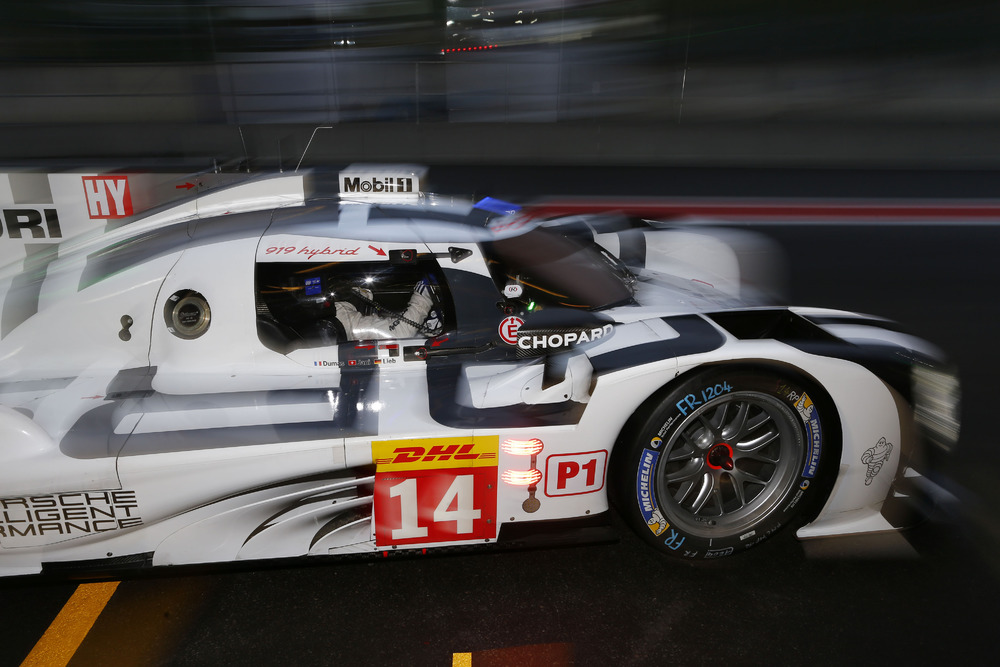 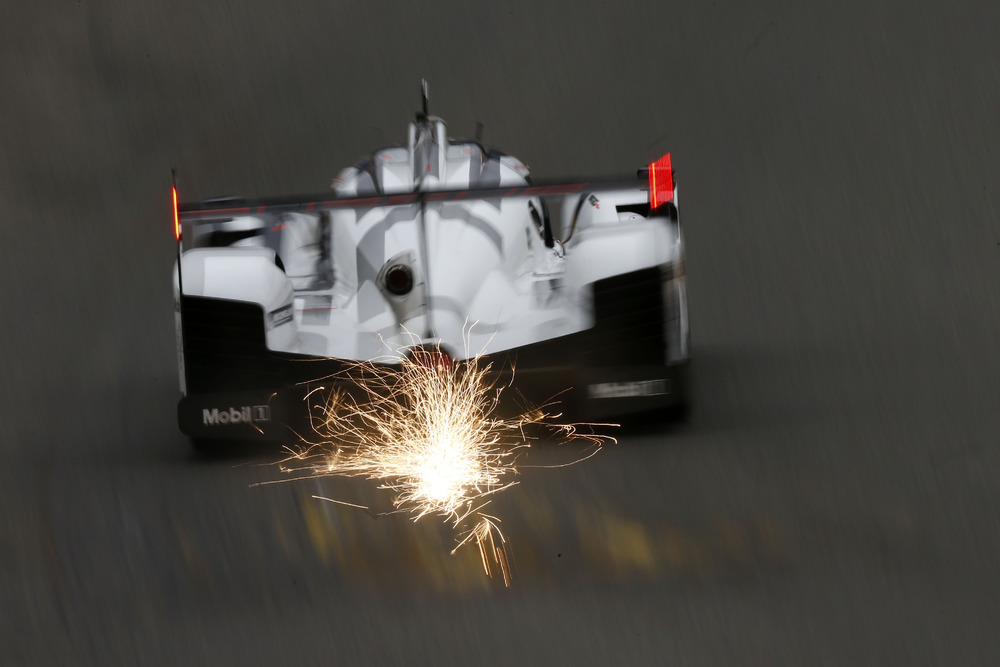 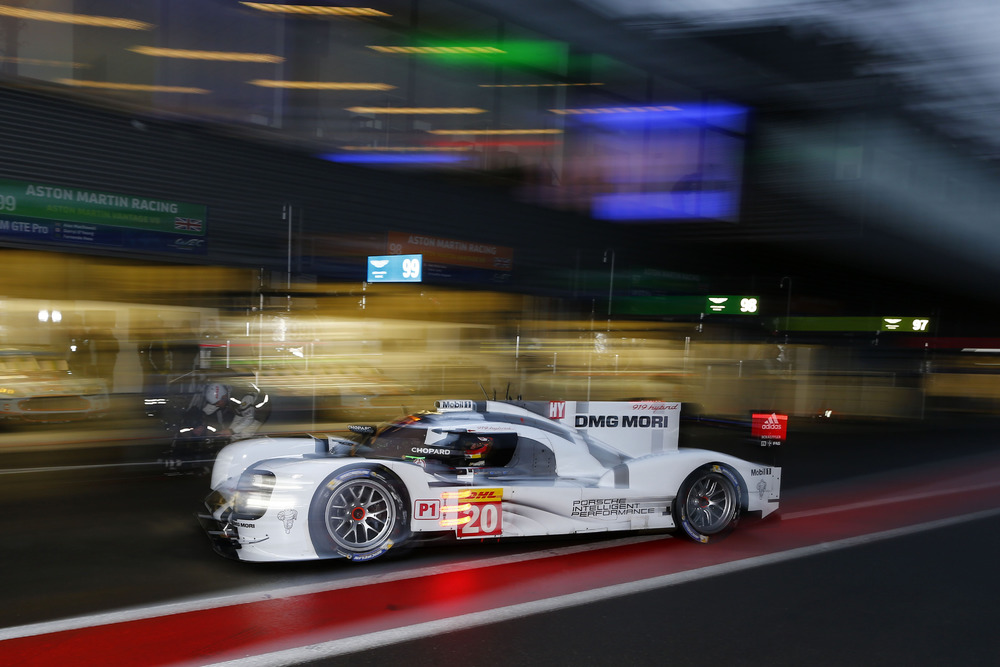 Stuttgart. Wet, dry, humid – pole position: starts first on the grid for what is only the second race after returning to the top category of the Sports Car World Championship WEC. The thrilling qualifying for the six hours of Spa took place on a drying track. It was Neel Jani who achieved the overall fastest lap of 2:00,334 minutes. He shares the 919 Hybrid no. 14 with Romain Dumas and Marc Lieb. The sister car of Timo Bernhard, Brendon Hartley and Mark Webber will start fifth at 14:30 hrs on Saturday.

The second of the eight WEC rounds is a two day event and has got an accordingly tight programme. Today, Friday, there were two free practice sessions of two hours each on the schedule as well as the qualifying session. In the first free practice session in the wet the 919 Hybrid cars no. 14 and 20 finished fifth and sixth respectively. In the second session car no. 14 was the fastest overall in dry conditions with the sister car coming sixth again. In total the two innovative prototypes completed 160 laps in the two free practice sessions.

In the WEC qualifying is split into classes. The LMP1 and LMP2 classes share 30 minutes on track. Two drivers from each car have to do at least two timed laps each. The average times from the four best lap times determine the grid positions. Neel Jani and Marc Lieb took over qualifying duties in car no. 14 while Timo Bernhard and Brendon Hartley shared the 919 Hybrid for the qualifying session.

Wolfgang Hatz, Board Member for Research and Development of AG: „Tonight this is a moment of great joy. After Silverstone we have made a big step forward. Having achieved our first pole position under tricky circumstances is almost unbelievable. The entire team did an outstanding job. The result is well deserved because our strategy was right and it is more than we could expect. The car has got huge potential. Tonight we will enjoy the moment and tomorrow we will be focussing on finishing the race. Then we really could call the Spa weekend a successful one.“

Fritz Enzinger, Vice President LMP1: “Unbelievable – this feels almost as though it has come too soon. We could not have expected this and we are very happy. After the podium in Silverstone this is another milestone. But our most important target for Spa remains to finish the six hour race with both our 919 Hybrids.“

Andreas Seidl, Team Principal LMP1: “What the team did today is just amazing. We have made all the right calls in difficult conditions. It was clear that the track would improve and that is why we decided to get those drivers back in the cars who were running on intermediate slick tyres in the beginning. Their lap times had the biggest potential for improvement. Marc Lieb did a picture-book job on this. Brendon Hartley did improve his lap time as well but had no time left for a second lap. This result is a great reward for the tough job of the entire team.”

Romain Dumas: “We were quick in the morning, in the afternoon and in qualifying again. The first practice session in the wet was a good lesson for qualifying. In Spa-Francorchamps a lot of things are unpredictable, the more of them you practice, the better it is. Even if we have things to improve: The balance is good, driving was great fun, our speed is okay and it looks promising.“

Neel Jani: “It is just great to be on pole. The conditions were tricky, especially on my first lap on slicks. Then it got better and my second lap was quicker. But at the same time it became dark and I was just hoping that there were no wet patches left. I thought I could improve further but then I received the call to pit and handover to Marc again. Initially it came as a surprise but it was a great strategic call from the team. Today in free practice we have got a lot of experience in the wet. Spa is famous for wet races and as long as it isn’t monsoon style that is fine for me. The temporarily four wheel drive of our hybrid car is exciting and I want to keep working on my driving style to exploit the system’s full potential.”

Marc Lieb: “This pole position means a lot to me. It has been hard work for a long time for many people. Taking pole position today came as a total surprise. On my first run the track wasn’t dry enough for slicks and then Neel got into the car. I was having a coffee in the back of the garage and watching him. Then I was suddenly told get your helmet back on and improve your earlier lap time. It was tough time management to get these two laps and I’m a very happy man. Now I hope for a good race.”

Timo Bernhard: “The first free practice session went smoothly and we could gather a lot of information. In qualifying I stayed out for a bit too long so afterwards there wasn’t enough time left for Brendon to do two flying laps and improve further. But nevertheless it was a great qualifying. Congrats to the guys of car number 14 – this pole position is another great moment for us. Now we will keep working to improve our car for tomorrow’s race.

Brendon Hartley: “Already in the morning the 919 felt very good in the wet, I had a lot of confidence in the car. The temporarily four wheel drive delivered a lot more traction than I experienced before which is very nice. In FP2 I had bad luck with the red flags and therefore only managed three laps. The changing conditions in qualifying obviously were difficult. But the team performed really well. We are competitive and it looks like we will see an exciting race tomorrow.”

Mark Webber: “I very much enjoy taking our new 919 Hybrid around here at Spa. It is a great track and today the weather was typical Spa and provided us with some challenges, but we have got as much information as possible and I remain confident. Considering the weather forecast for Saturday I expect a less dramatic race than we had at Silverstone. Our main goal is to finish the six hours of Spa with both cars.”

Spa – the roller coaster in the Ardennes:

The Spa-Francorchamps circuit has got it all: Fast corners, tight chicanes, long full throttle sections. The most famous corner combination is the „Eau Rouge“. The nowadays 7.004 kilometre long circuit is located in the triangle of the towns of Stavelot, Spa and Malmedy with the start-finish area being close to Francorchamps. The differences in elevation are significant (around 100 metres) and the track is imbedded nicely in the rough natural landscape of the Ardennes. The original street circuit of back then almost 15 kilometres per lap, was opened first in 1921. Francorchamps is only around 20 kilometres far from the German-Belgian boarder.