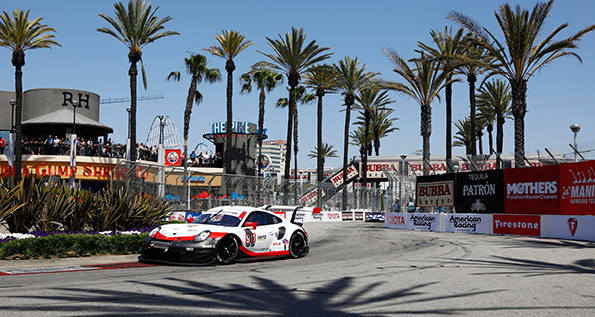 After the 911 RSR celebrated its first win of the IMSA SportsCar Championship season at the 12 Hours of Sebring, the situation at Long Beach looked just as promising for a long time. At the shortest race of the year on the narrow street circuit in California, Earl Bamber (New Zealand) dominated the field until 22 minutes before the end of the 100-minute sprint – only to have to park the 510 hp race car from Weissach, which he shared with Laurens Vanthoor (Belgium), in the pits with a broken suspension. At the wheel of the second 911 RSR fielded by the GT Team, the Sebring winners Patrick Pilet (France) and Nick Tandy (Great Britain) secured sixth place in the GTLM class ahead of their teammates.

To the picture-postcard backdrop of sun, sea and palms, which makes Long Beach Monte Carlo of the USA, the 911 RSR took off from the front grid row for the first time this season. Laurens Vanthoor used this advantage to promptly snatch the lead in lap one. He fended off his pursuers repeated attacks to hold on to his spot. After 38 minutes he handed the #912 911 RSR off to Earl Bamber during a safety car phase. The New Zealander rejoined the race as second behind a BMW that had pitted earlier, and immediately closed the gap to the leader. Putting in an inspired overtaking manoeuvre, he recaptured the lead and even managed to pull clear from the rest of the strong GTLM field before a damaged suspension forced him into retirement. In the #911 911 RSR, Patrick Pilet and Nick Tandy never really regained their stride in the race due to various incidents after their first pit stop.

Round four of the IMSA SportsCar Championship is contested on the Mid-Ohio Sports Car Course in Lexington in the US state of Ohio on 6 May.

Comments on the race
Dr Frank-Steffen Walliser, Vice President Motorsport and GT Cars: “This race offered everything that spectators like on a street circuit. With our #912 contender, Laurens and Earl did everything right. Laurens made a cracking start and immediately took the lead. Earl also fought his way back to the front after the pit stop. Both of them drove an immaculate race, and also found brilliant solutions to difficult situations during some close calls with competitors. For a street race, they were in a very comfortable lead when the damage to the suspension, which could have been caused by contact, quite possibly cost them the win. That was simply bad luck. The race for the #911 car was influenced by a rear-ender. There wasn’t a lot Nick and Patrick could do after that. All in all, we can say that the performance of the 911 RSR was good and that the team did a great job. We’ll take these positive impressions with us to the next race in Mid-Ohio.”
Patrick Pilet (911 RSR #911): “It wasn’t ’s day today. It’s a shame for our teammates in the #912 car. They drove a great race but unfortunately weren’t rewarded for it. For us the start of the race was pretty hectic. I had a hefty nudge in the second corner when everyone suddenly stopped in front of me. Overtaking is really hard on this circuit so I wanted to conserve as much fuel as possible. That proved to be the right strategy. We had a very short pit stop, but couldn’t make the most of this advantage because when Nick tried to rejoin the race, he was blocked by a car in front of him. Now I’m looking forward to Mid-Ohio.”
Nick Tandy (911 RSR #911): “When I wanted to leave the pits after our stop, another car got in the way. We could have rejoined the field in second place. If this had happened, the outcome would definitely have been different for us. The additional pit stop that cost us a lap then finished us off. Still, our 911 RSR was fast and the team, as usual, gave us great support.”
Earl Bamber (911 RSR #912): “Our 911 RSR ran very well on this track. The guys did one quick pit stop and we were holding a comfortable lead. But then something went wrong with the suspension and that was the end of our race. It’s a shame for the team, but such things happen. Now we’ll be back to attack in Mid-Ohio.”
Laurens Vanthoor (911 RSR # 912): “My start was really good. We’d actually put a plan in place this morning because the start in Long Beach is very important due to the fact that overtaking is not easy on this narrow racetrack. This plan worked well. At the start, I immediately overtook the Ford polesitter and then tried to control the race without risking too much. That worked up until the pit stop. Earl then did a great job until a technical defect put the final spoke in the works.”