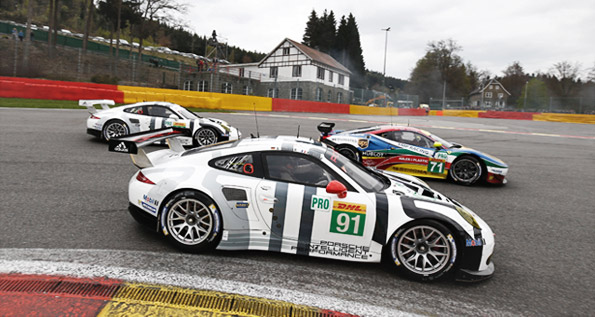 Stuttgart. At the six-hour race on the Circuit de Spa-Francorchamps, generally regarded as the dress rehearsal for the Le Mans 24 Hours on 13/14 June, the Manthey squad scored two podium results. Campaigning the 470 hp 911 RSR, which is based on the seventh generation of the iconic 911 sports car, works drivers Frédéric Makowiecki (France) and Richard Lietz (Austria) put in a spirited charge through the field to bring home second place in the GTE-Pro class. In the sister 911 RSR fielded by Manthey, Junior Sven Müller (Germany) and Kévin Estre (France) secured third after a strong drive at their WEC debut.

Over 54,000 spectators travelled to the storied circuit in Belgium’s Ardennes region on Friday and Saturday and were treated to a riveting qualifying followed by an equally as gripping second round of the Sports Car World Endurance Championship. After a somewhat cautious start from the fourth GT row, Frédéric Makowiecki and Richard Lietz, who team up in WEC cockpit for the first time together this season, picked up the pace in the #92 911 RSR over the course of the race. Thanks to their spirited drive on the challenging Ardennes circuit and a perfect pit stop strategy, the two made up critical places and, after a spectacular charge through the field, were able to crown their feat with a podium finish.

With an impressive performance at their maiden outing with the 911 RSR, Junior Sven Müller and Kévin Estre were also able to hold their own in the top-class GT field. On the difficult 7.004-kilometre circuit, the pair stood in for the regular WEC drivers Michael Christensen (Denmark) and Patrick Pilet (France) – who are contesting the Tudor United SportsCar Championship in Laguna Seca/USA on Sunday for North America – and promptly clinched a podium result. At their first WEC race and as teammates, they lost time and positions in the first race hour through a collision, but remained unruffled by the setback. Turning consistently quick laps and with that touch of race luck, they battled their way up the field to bring home a well-deserved podium result. This season, Sven Müller normally competes in the Mobil 1 Supercup and drives at selected rounds of the Cup Deutschland. Kévin Estre won the Cup France in 2011 and the Cup Deutschland in 2013.

In the 911 RSR fielded by the customer team Abu Dhabi Proton Racing, the former Junior Klaus Bachler (Austria), and his teammates Christian Ried (Germany) and Khaled Al Qubaisi (Abu Dhabi) narrowly missed out on a podium spot in the GTE-Am class. They were flagged off in fourth. US race driver and actor Patrick Dempsey, works driver Patrick Long (USA) and Marco Seefried (Austria) finished in fifth at the wheel of Dempsey Proton Racing’s 911 RSR.

Dr Frank-Steffen Walliser, Head of Motorsport “This was a somewhat turbulent race under tricky conditions. You don’t have to understand the interventions of the stewards, but somehow it all balanced out in the end. Above all, we must underline the performance of Kévin Estre and Sven Müller, they did a fantastic job. When you’re new to a well-oiled team, the pressure and expectations are always very high, but the way these two handled it deserves the highest respect. They came up through the ranks of ’s brand trophy series, and, considering the field they were up against today, everything they learned in our makes cup series speaks for itself. You can only recommend to every young driver to learn there.”

Sven Müller ( 911 RSR #91): “We never imagined we would finish on the podium after such a turbulent and difficult early phase. But the fact that we managed it is a tribute to the strong performance of the entire team. To finish my first ever WEC race on the podium is an awesome feeling. Even starting in front of a packed grandstand and to see the enthusiasm of the fans was incredible. It gave me goosebumps. That was one of the most wonderful and thrilling races I’ve ever contested.”

Kévin Estre ( 911 RSR #91): “My first stint ran well, but unfortunately I had a collision and I was penalised for it. This cost me time. In my second stint I stuck behind Fred for quite some time because he was a little faster than me. But I learned a lot, most of all how to conserve the tyres. My third stint with consistently fast lap times was my best. It was a great experience to drive the 911 RSR on this track. I’m pleased with my race.”

Richard Lietz ( 911 RSR #92): “Over the course of the race we saw that the grid position is perhaps not that important at the six-hour event. But seriously: it was a very turbulent race. The stop-and-go penalty hit us hard, but we still managed to finish on second. This is great for the championship and certainly the best we could do today.”

Frédéric Makowiecki ( 911 RSR #92): “The race was tough and the result was tight. My first stint was on used tyres and a little difficult. The other guys were all on fresh rubber, so it wasn’t easy to keep up. I simply didn’t get the tyres up to temperature and that cost me a lot of time. Thanks to our strategy, which worked perfectly, we could really turn up the heat again once we fitted new tyres, especially in the final phase. The drive-through penalty was a setback, but we handled it. The balance of our 911 RSR was very good today, and we had a lot of fun driving on this great track. We should be very pleased with second place after our difficult qualifying.”

Patrick Dempsey ( 911 RSR #77): “My first race on this very selective circuit was a fantastic experience. My teammates have all raved about Spa, but my expectations were exceeded. Our qualifying ran without mishap and our 911 RSR’s pace was good in the race. I tried to make as few mistakes as possible, and aside from my spin, I managed this well. All in all, the experience was very positive for the team. Now we can look forward to Le Mans.”

Klaus Bachler ( 911 RSR #88): “I got away well at the start and went from third to second place. After the first race hour we were on course for the podium, but then several incidents threw us back. Our 911 RSR made contact with several competitors, and our car was slightly damaged. Our team helped us with great pit stops, so that we could secure fourth in the end. It’s a pity, because I’m sure we could have achieved a better position today.”

Round three of the Sports Car World Endurance Championship WEC is at the legendary 24 Hours of Le Mans on 13/14 June. Prior to this on 31 May, an official test day is held on the Circuit des 24 Heures.

As support to the Sports Car World Endurance Championship WEC, the Cup Great Britain and the GT3 Cup Challenge Benelux held two championship races each at Spa-Francorchamps, which brought the number of pilots competing on the storied circuit this weekend to 55. “We were able to showcase the entire Motorsport pyramid from the base to the top here in Spa,” said Head of Motorsport Dr Frank-Steffen Walliser, who handed the winner’s cup of the GT3 Cup Challenge Benelux to Max van Splunteren on Saturday. Dan Cammish, the winner of the Cup Britain race, received his trophy from Wolfgang Hatz, Board Member for Research and Development at AG.

Dr Frank-Steffen Walliser did not miss the opportunity to stroll through the brand trophy paddocks, as did factory pilot Nick Tandy, who took the chance to visit his former competitors from the Cup Britain. And many drivers from the makes cups had a look at the work steam in the WEC. “That’s what makes special,” commented the Head of Motorsport. “Everybody is welcome at anytime with us. We are not an elite club, but one big family. And that’s how we will keep it in the future.”