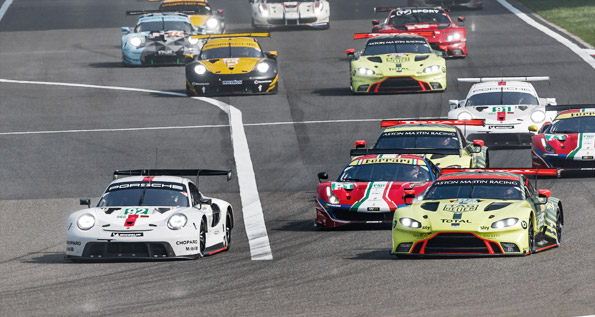 Stuttgart. Scoring two podium finishes at round three of the World Endurance Championship (WEC), has expanded its lead in the world championship. At the wheel of the new 911 RSR, reigning world champions Kévin Estre (France) and Michael Christensen (Denmark) took up the four-hour race on the Shanghai International Circuit (China) from pole position and secured second place. With this result, the successful pair extended their lead in the drivers’ classification. Gianmaria Bruni (Italy) and Richard Lietz (Austria) took the flag on Sunday in their ca. 515 hp nine-eleven fielded by the GT Team in third place.

The race on the outskirts of the Shanghai metropolis was gripping to the last second. The team used the full course yellow, a good hour before the end of the race, for its last pit stop. Because of the early stop, the drivers had to be particularly mindful of the fuel consumption over the remaining 1:05 hours. In spite of this, Estre performed an impressive overtaking manoeuvre in the number 92 vehicle. With less than an hour to go to the finish, the Frenchman swept from third into second place. Bruni, who drove the final stint in the number 91 car, managed to make up one position with 40 minutes left on the clock and ultimately achieve third place.

At one point, however, the driver pair Estre/Christensen had to serve a ten-second penalty due to an unsafe release in the pit lane, where they pulled out into the fast lane in front of a rival car. Nevertheless, spirited drives and a strategic effort paid off for the GT Team over 115 laps on the 5.451-kilometre circuit and yielded both driver crews a spot on the podium. Estre and Christensen were able to extend their lead in the drivers’ classification by five points. After round three of the season, Bruni and Lietz are currently six points off the lead in third. has managed to expand its lead in the manufacturers’ classification of the FIA World Endurance Championship by 17 points with the new 911 RSR (2019 model year), which is based on the high-performance 911 GT3 RS* road-going sports car.

Alexander Stehlig (Head of Operations FIA WEC): “We knew that we’d have a difficult race ahead of us. Unfortunately we lost a position with the number 92 car, which had started from pole position. Our second car started from sixth and finished in third. We weren’t the fastest out there at times, but we compensated for this through our teamwork. We’re thrilled to have extended our lead in the championship standings and with our perfect performance as a team this weekend.”

Gianmaria Bruni ( 911 RSR #91): “We had a good race with a great strategy. Tyre management was a challenge as we had to be very careful with the tyres without it costing too much time. In the final stint I was running in fourth place and managed to overtake another vehicle. Richard also did an outstanding job at the start. We’re really pleased with second and third place.”

Richard Lietz ( 911 RSR #91): “Our new 911 RSR has finished on the podium at every race so far this season. We’re becoming more and more familiar with the car. We still need to perfect the setup. However, after a difficult qualifying, third place was a conciliatory conclusion to the weekend.”

Kévin Estre ( 911 RSR #92): “It was a very good race for us, even though we weren’t the fastest on the track today. Still, everyone in the team did a good job, in fact, without the ten-second penalty we might have even won. Now I’m looking forward to Bahrain. After three second places in a row, I’d like to climb to the top step of the podium again.”

Michael Christensen ( 911 RSR #92): “Unfortunately we didn’t have the pace to win today, but once again our strategy was great. We couldn’t do better than that. We still have a few things to work on, but we’re very happy with this result.”

Larry ten Voorde ( 911 RSR #57 GTE-Am): “This race over four hours was the longest I’ve ever driven. And to finish up on the podium is fantastic of course. It wasn’t easy for us, because after spinning at the start we had quite some ground to make up. It was important to make no mistakes and receive no penalties. That was my goal at my WEC debut and it worked.”