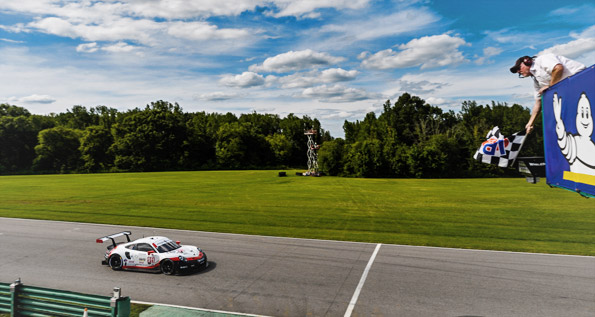 Stuttgart. With a one-two result, continues its winning streak in the IMSA WeatherTech SportsCar Championship. At the third to last race of the season, Patrick Pilet (France) and Nick Tandy (Great Britain) crossed the finish line in the 911 RSR as the overall winners. Laurens Vanthoor (Belgium) and Earl Bamber (New Zealand) finished second driving the number 912 sister car and, thanks to their victories Long Beach, Mid-Ohio, and Canada’s Bowmanville, continue to hold the lead. The winners of the rounds at Sebring and Watkins Glen, Pilet and Tandy, managed to reduce the gap with their third win to eleven points in the drivers’ classification. In the GTLM class, also holds a clear lead the manufacturers’ classification with 304 points.

In sunny weather and temperatures of 25 degrees Celsius, starting driver Vanthoor stormed into the lead when the red lights were extinguished. Behind him, Tandy outpaced four opponents on the outside of the track and entered the first corner directly behind Vanthoor. Over the 2:40 hours of the race, there was almost always a 911 RSR in the lead. The two identical cars implemented different strategies, which enabled Tandy and Pilet to move to the front of the field. Perfect pit stops during the first caution phase contributed to the success, as did a successful restart when the field was released after a second caution phase shortly before the end of the race. Ultimately, Tandy and Pilet came out on top, repeating their 2015 success on the storied race track in Virginia.

For the next championship round on 13 to 15 September, the IMSA WeatherTech SportsCar Championship travels to California’s Laguna Seca.

Steffen Höllwarth (Programme Manager IMSA SportsCar Championship): “I’m incredibly proud of the whole team. What a great team effort. We opted for a good strategy for this circuit, the racetrack suits the 911 RSR perfectly, and our pit stops were again excellent. We were rewarded for this. Now we’ll enjoy and celebrate our double victory. On Monday, we’ll begin the meticulous work for the last two races of the year.”

Patrick Pilet ( 911 RSR #911): “What a great race! Nick put in a fabulous start and we kept pushing hard over the whole distance. Our strategy worked. We’re delighted with this outstanding result for , and we’ll do everything to secure the drivers’ title as well.”

Nick Tandy ( 911 RSR #911): “I had a really great start. In the first corner everyone took the inside line. I braked late and managed to make up four positions by taking the outside line. That was the key to success. The car ran beautifully over the entire race weekend and our strategy was super. A great team effort.”

Earl Bamber ( 911 RSR #912): “Everything ran well for us and for on the whole. Positions one and two is the perfect outcome. In the manufacturer’s classification we only have to start both races to take home overall honours. I’m very pleased with this great result for the team.”

Laurens Vanthoor ( 911 RSR #912): “You can’t do better than a one-two result. It’s a fantastic result for the entire squad. Both 911 RSR were consistently fast over the whole weekend. Of course, Earl and I would have preferred to stand at the top of the podium, but one can’t really complain about position two.”