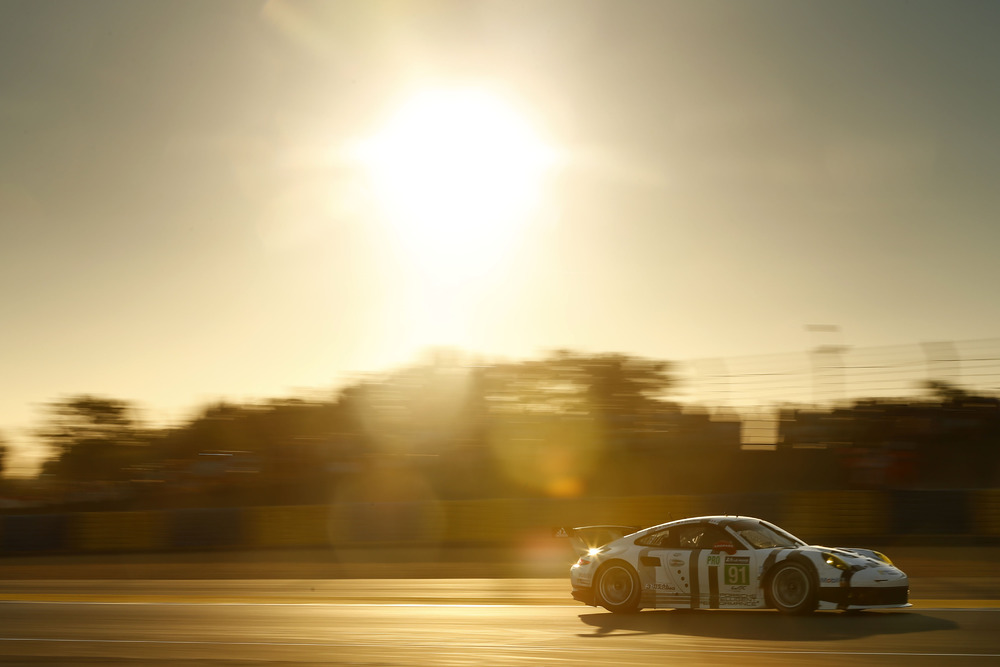 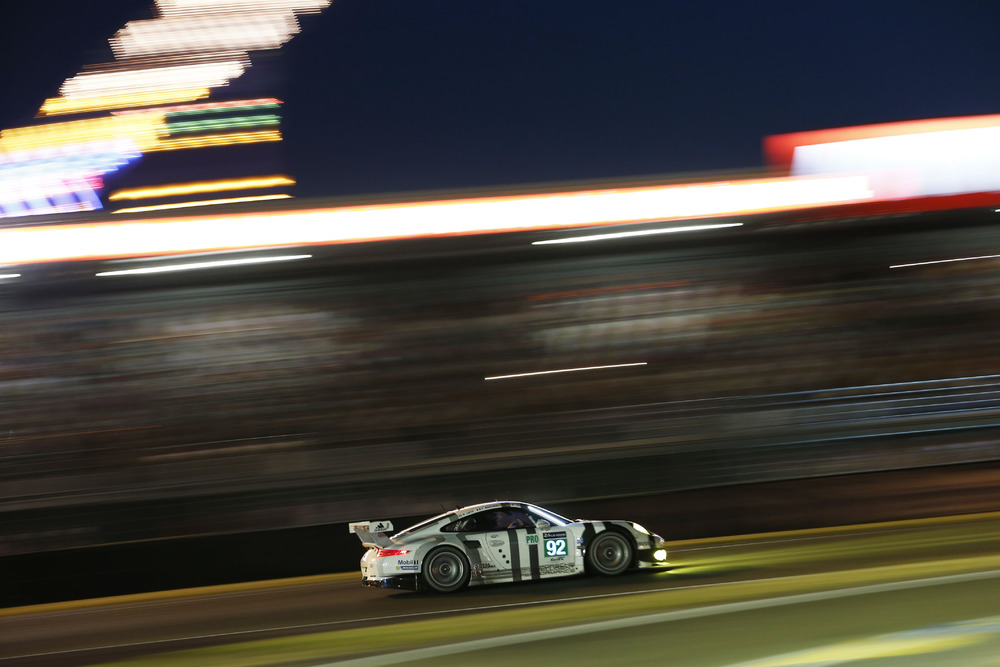 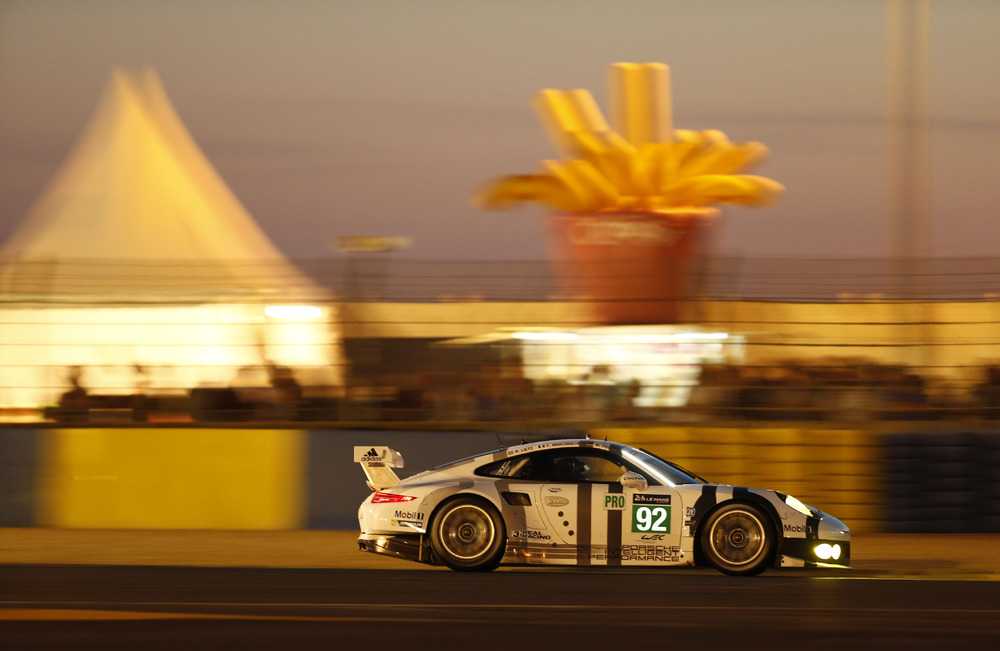 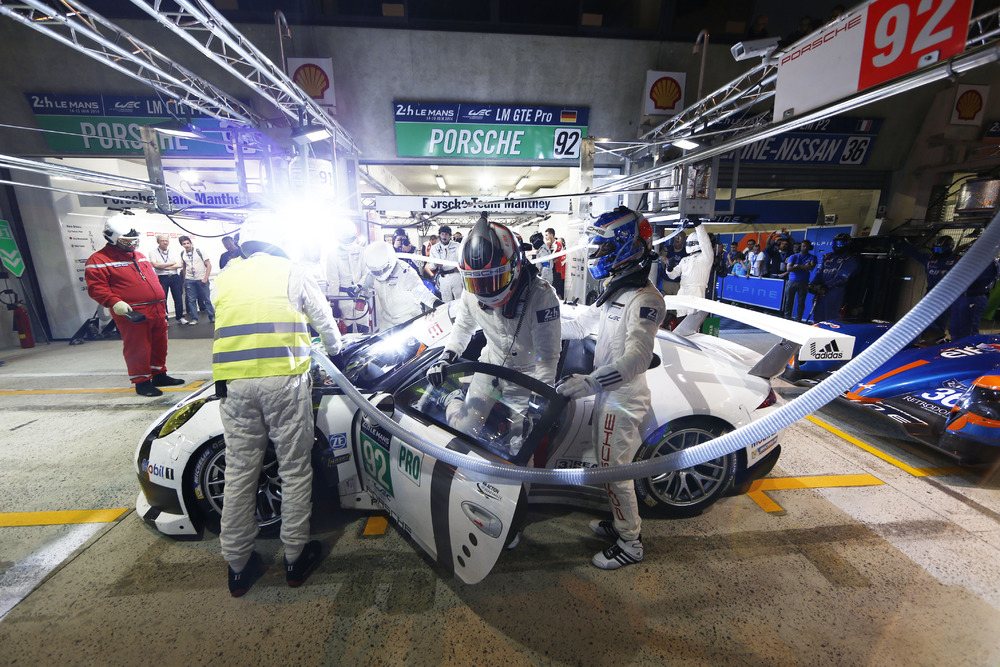 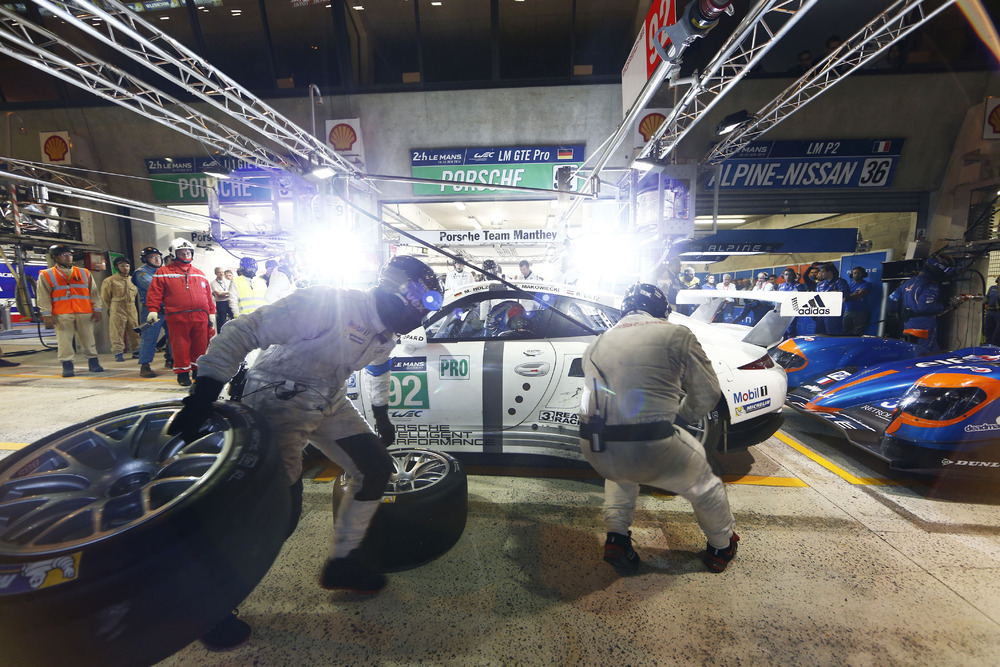 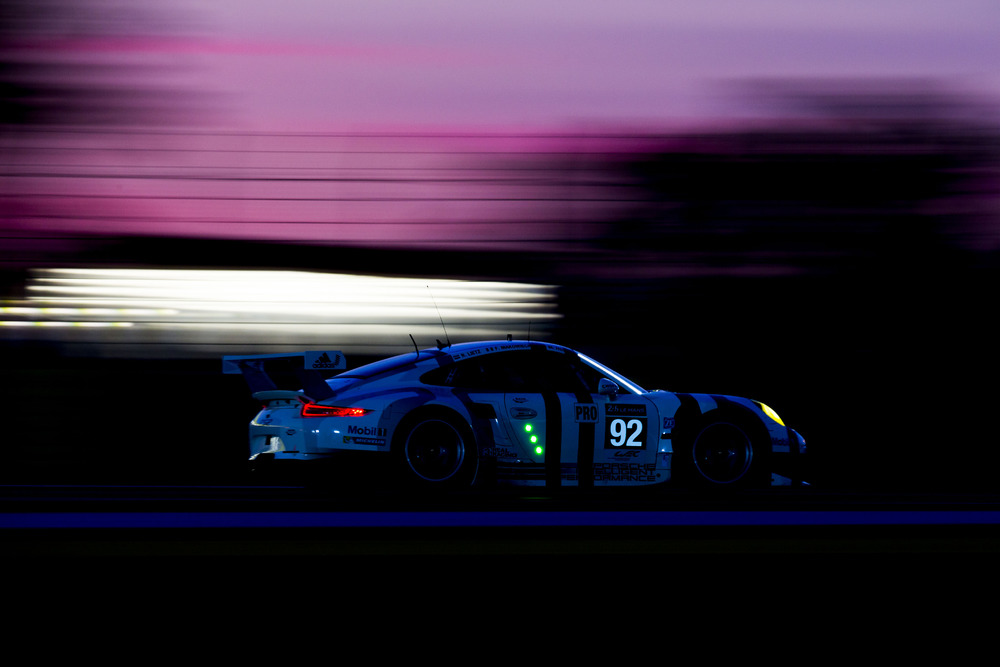 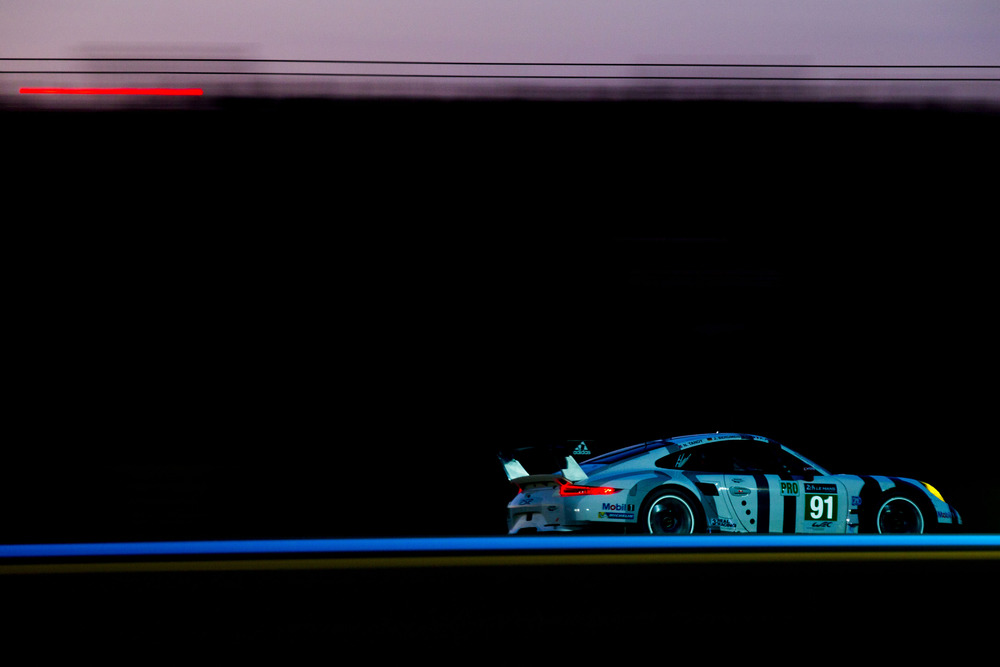 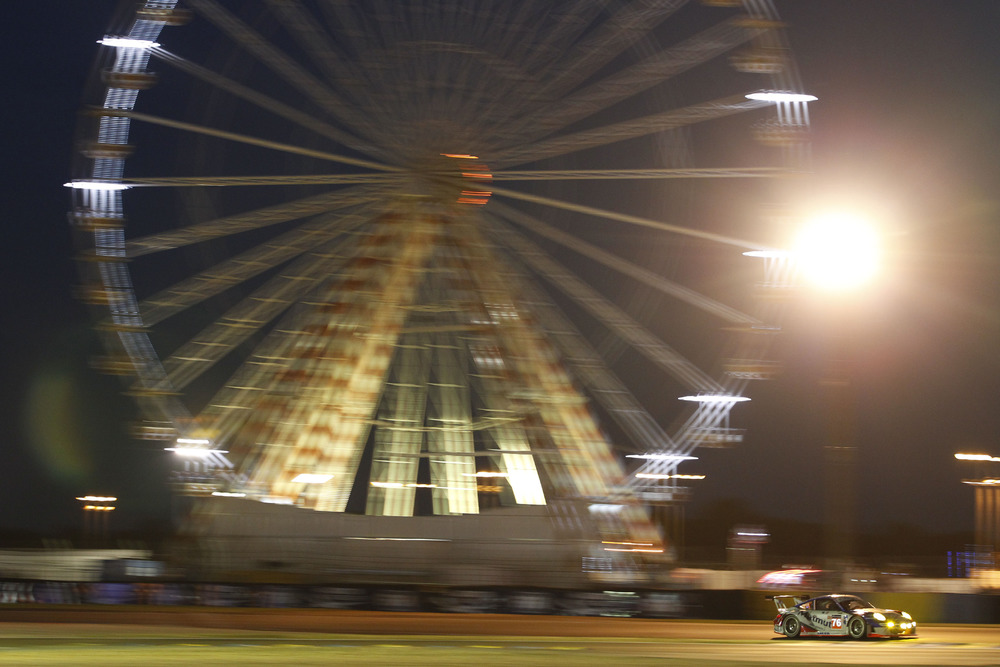 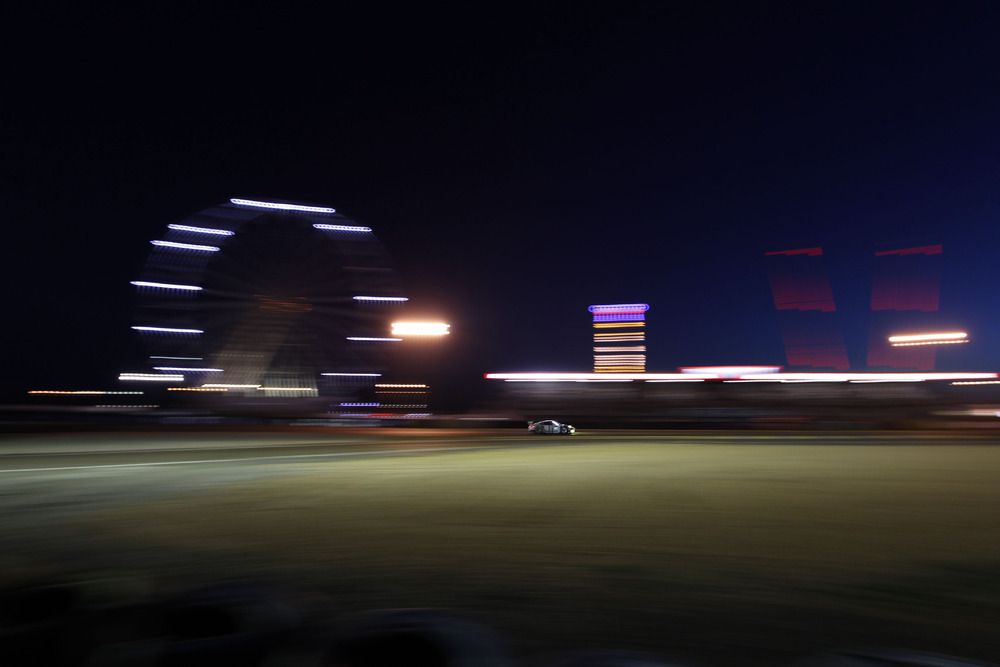 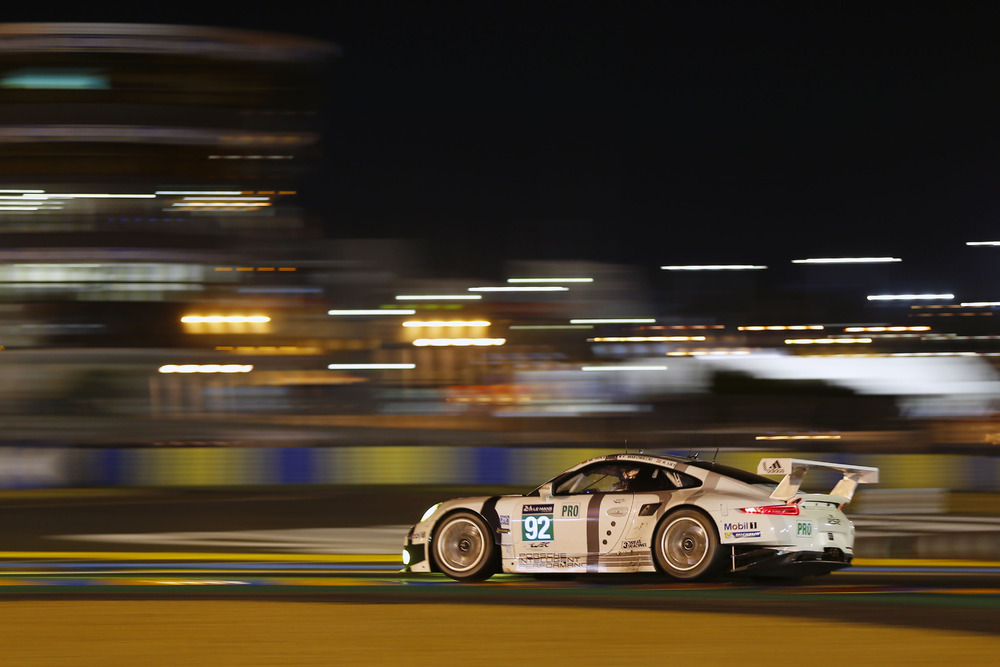 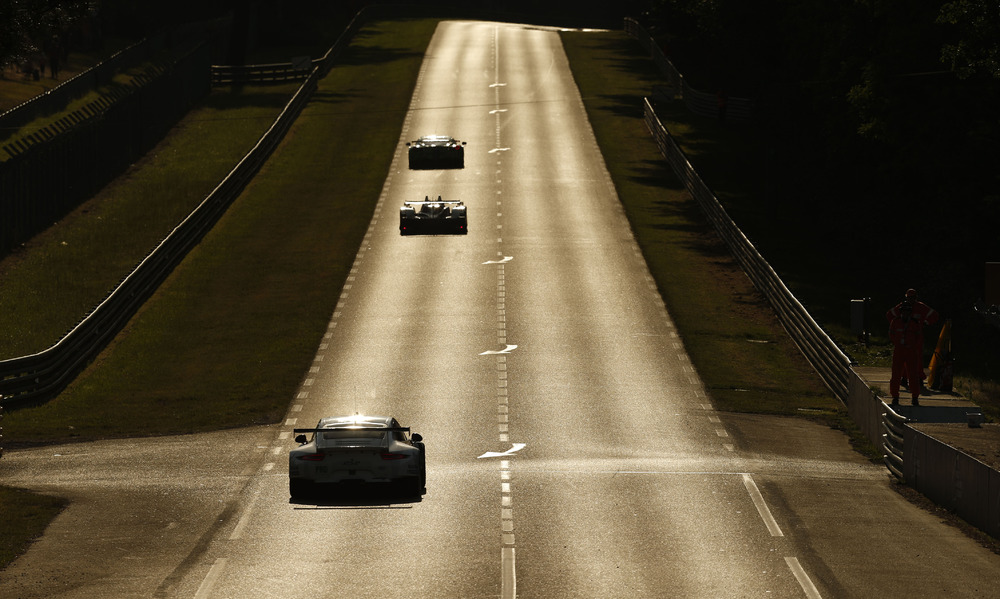 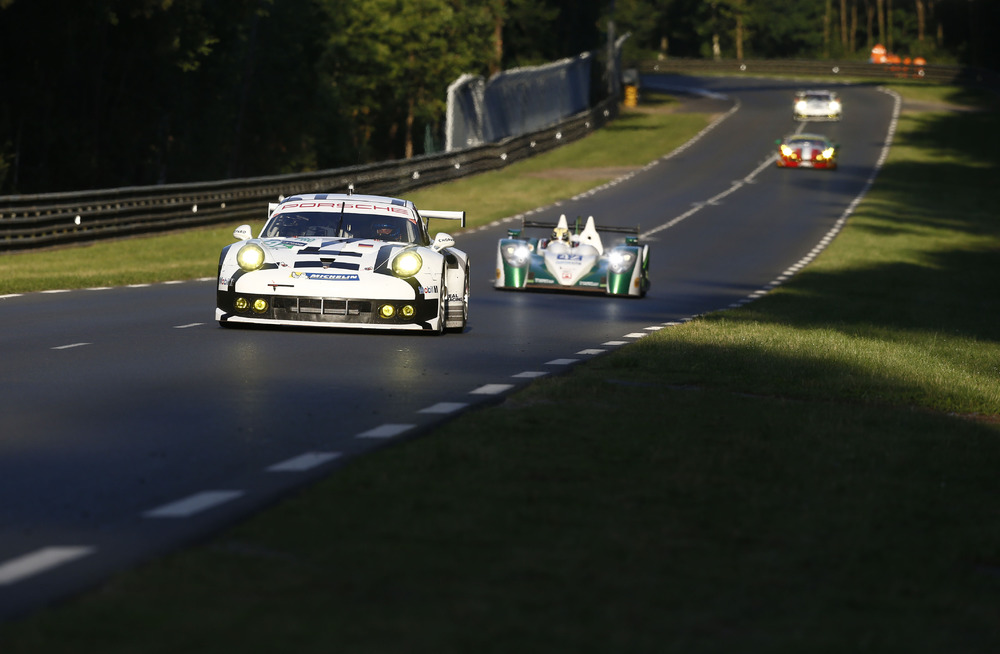 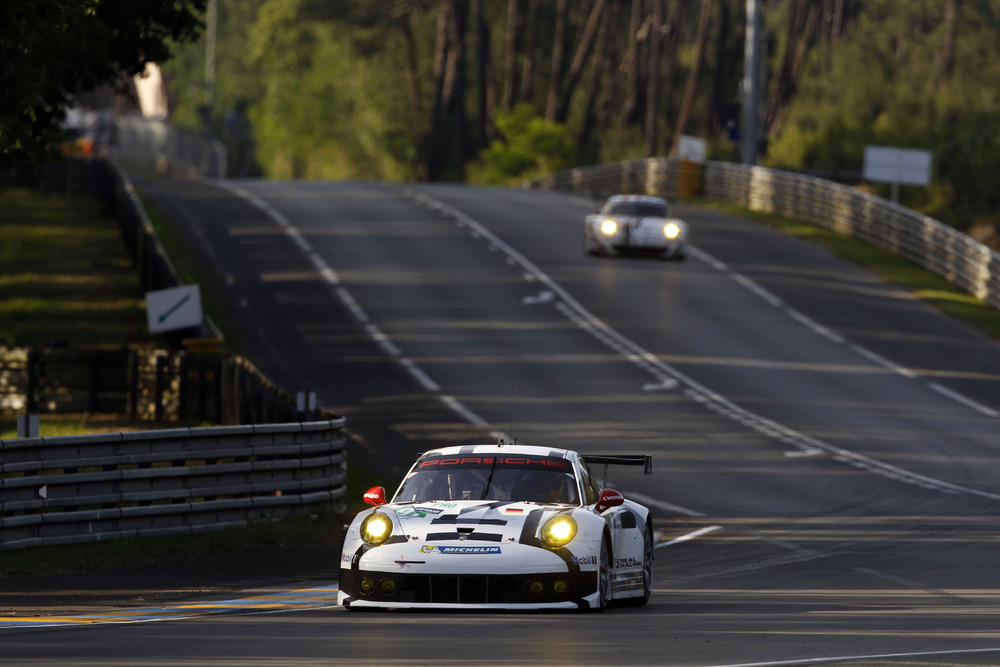 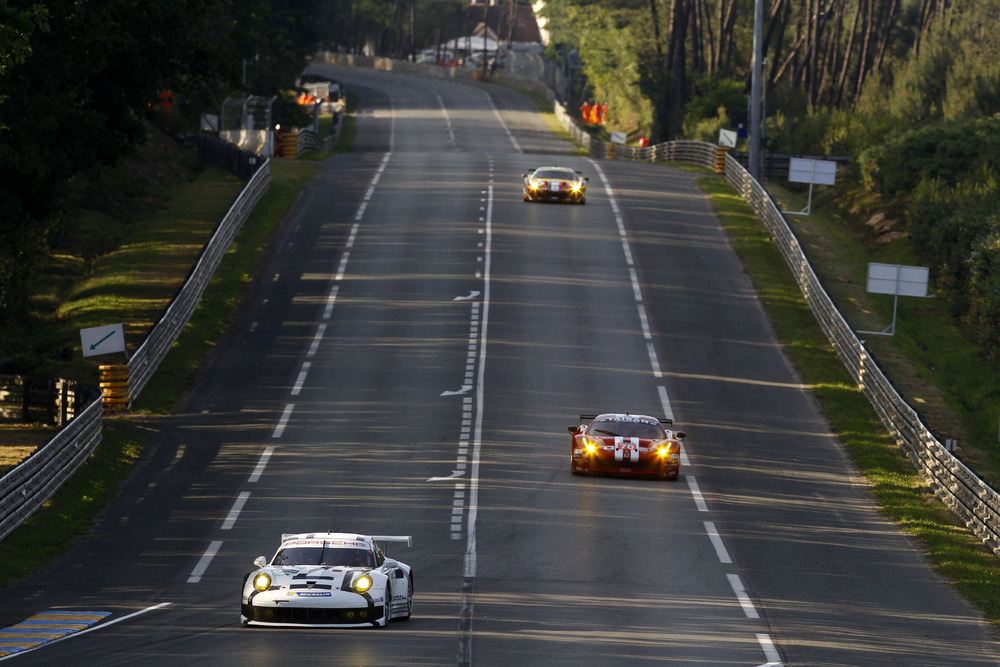 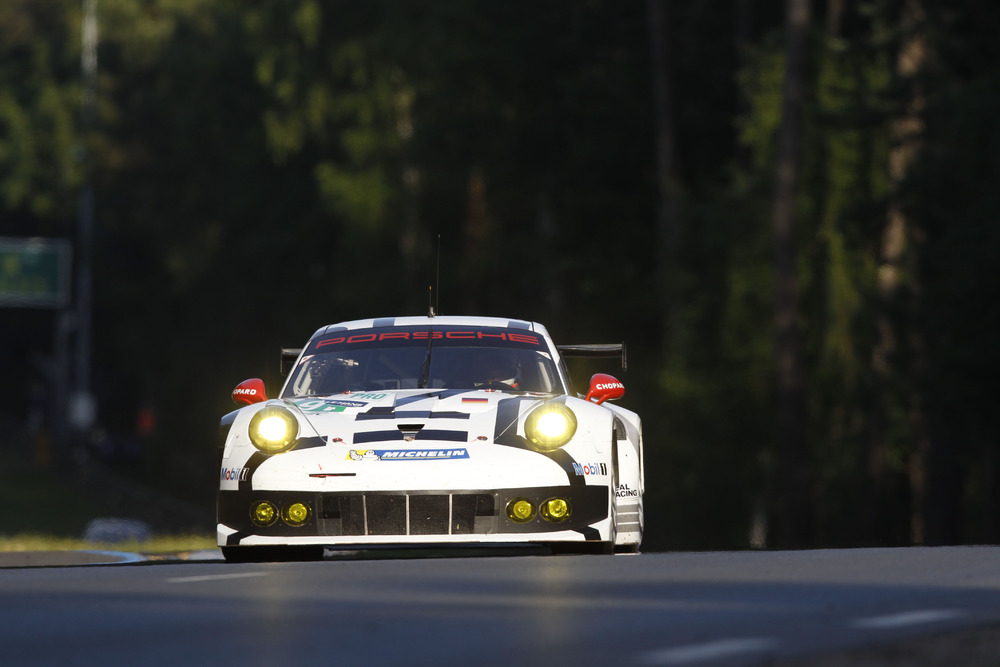 Stuttgart. Eventful and difficult – is how Team Manthey experienced the third qualifying session for the Le Mans 24 hour race. When the qualifying ended at midnight on Thursday, the number 92 911 RSR driven by works drivers Marco Holzer (Germany), Frédéric Makowiecki (France) and Richard Lietz (Austria) only managed to post the sixth quickest time in the GTE-Pro class. The 911 RSR with starting number 91 shared by their factory pilot colleagues Joerg Bergmeister (Germany), Patrick Pilet (France) and Nick Tandy (Great Britain) heads into the 82nd running of the long distance classic in the Sarthe region on Saturday from seventh place.

With Frédéric Makowiecki at the wheel of the 911 RSR on the 13.629 kilometre Circuit des 24 Heures, all chances were lost for a better starting position shortly before the end of the second qualifying session: the winning car from last year was so badly damaged in a collision that the Frenchman could only take up the hunt for top times again in the third qualifying session after a long delay for repairs. By this time, fast laps were no longer possible. Suffering a technical problem, the #91 911 RSR rolled to a stop on the finish straight. Since the regulations state that a broken-down car may not be pushed back into the pits, the qualifying came to an early end for Patrick Pilet and his teammates.

Proton Competition set the sixth fastest time in qualifying as the best customer team in the GTE-Am class. In the #88 911 RSR, junior Klaus Bachler (Austria) tackles the world’s most famous race with Christian Ried (Germany) and Khaled Al Qubaisi. The 911 RSR campaigned by Dempsey Racing Proton takes up the race on Saturday one position behind, with works driver Patrick Long and his American compatriots Patrick Dempsey and Joe Foster sharing the cockpit.

Normally at the WEC races, two pilots must qualify a car, but in Le Mans only the fastest time of one pilot determines the starting position for the race.

Quotes after the 3rd qualifying session

Hartmut Kristen, Head of Motorsport: “Unfortunately it wasn’t possible to get any decent work done in the second and third qualifying sessions, either. There were constant interruptions with cars at the side of the track. In addition, our number 92 vehicle crashed at the very time we wanted to attempt our fast laps. Repairs took almost an hour. Afterwards the number 91 car sustained some damage that we haven’t been able to identify as yet because the car is still in the Parc fermé. On top of all that, we also had to change our plans with the number 92 car so that Nick Tandy could complete his mandatory night laps. Now we have to ensure that we get the cars ready for the race. Then we have 24 hours to deliver a good performance.”

Joerg Bergmeister (#91): “That’s not exactly the result we were after. Before the technical problem cropped up the car was running really smoothly. Basically I think we have a good car, so we should be able to gain lots of positions in the race.”

Patrick Pilet (#91): “The rear axle caused some problems. I don’t know exactly what happened. Because the regulations prohibit you from pushing the car to the pits, our qualifying was over unexpectedly early unfortunately.”

Nick Tandy (#91): “All in all that wasn’t the perfect way to prepare for the race. The many interruptions during all three qualifying sessions pretty much threw our plans out the window. And the fact that we had to stop so early in Q3 puts me at a particular disadvantage because I wasn’t able to participate in the test day and therefore I haven’t had the chance to turn enough laps on this difficult track. Luckily the stewards have allowed me to complete my remaining mandatory night laps in our #92 car.”

Marco Holzer (#92): “I only drove one lap during this qualifying so that I’ve done my prescribed five laps in the dark.”

Frédéric Makowiecki (#92): “I was somewhat slower shortly before the end of the second qualifying. There was a lot of traffic out on the track and I wanted to get another clear run. When I sped up again, the front right side was hit by another car. This damaged the front of our 911 RSR. Our mechanics did a great job and quickly repaired the car so that I could go back out on the track in the third qualifying, albeit a little later. But I wasn’t able to improve on our time. Still, I think we’ve found a good baseline set-up for the race.”

Richard Lietz (#92): “Of course we’d hoped for a somewhat better starting position. But I’m feeling confident for the race because we managed to significantly improve the car’s race set-up and I’m satisfied with this. As far as lap times are concerned, it looks like we’re too slow. But I hope we can match the pace of the front-runners over an entire stint and that our reliability will yield us a top result in the end.”

Patrick Long (#77): “Our car is good for a top three placing so we’re naturally a little disappointed with this qualifying result. But we missed the chance to achieve a better starting position today because we didn’t have the right preheated tyres when we needed them. It’s a real shame that we’re not up where we should be with the 911 RSR. But our qualifying performance last year was about the same and we just missed out on a podium spot at the flag. Despite everything, that makes me feel confident.”

Patrick Dempsey (#77): “That wasn’t the best qualifying. Still we kept our noses clean and that’s really important at Le Mans from what I’ve seen here today. We have to find a bit more speed, no doubt about that. Now I’m looking forward to the race, it’ll definitely be another fantastic experience for us all.”

Klaus Bachler (#88): “Luckily we pulled another good lap out of the bag. Unluckily I encountered quite a lot of traffic during my three laps. The first lap was particularly bad when my tyres had the best grip. In the first sector alone I must have been overtaken by about five LMP1 cars. Our car is much improved since the first qualifying, so that was exactly the right step. Now we have a good starting position for the race. 24 hours is a long time and our pace is good. I can’t wait for Saturday.”