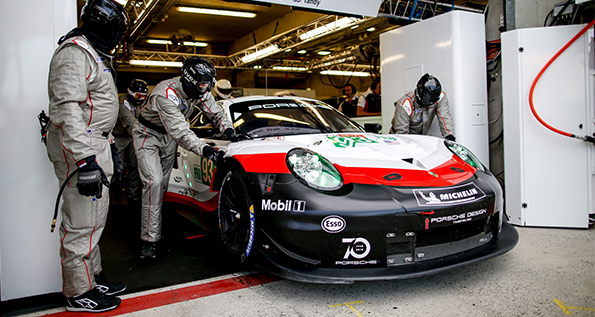 On June 16, the 86th edition of the Le Mans 24 Hours takes off. This weekend’s official pre-test marked the start of the critical phase for the world’s toughest automobile race. 180 drivers and 60 vehicles will fight for victory at Le Mans. With four ca. 510 hp 911 RSR contesting the GTE-Pro class, fields the largest GT works contingent in the company’s history at the 13.626-kilometre Circuit des 24 Heures. Four customer squads run an additional six 911 RSR in the GTE-Am class. At the test day, fans saw the two works cars with the starting numbers 91 and 92 sporting the traditional Le Mans livery from the 1970s and 1980s for the first time on the track. With 19 overall victories and 105 class wins, is a record holder at Le Mans.

In slightly cloudy conditions and just under 28 degrees Celsius, all twelve works drivers worked on optimising various setups at the pre-test. Patrick Pilet (France), Nick Tandy (Great Britain) and the New Zealander Earl Bamber reeled off 912,942 kilometres in the #93 911 RSR, making them the fastest on the test day. Richard Lietz (Austria), Gianmaria Bruni (Italy) and Frenchman Frédéric Makowiecki covered 1034,576 kilometres in the #91 911 RSR and clocked the second best time in the GTE-Pro category. Kévin Estre (France), Michael Christensen from Denmark and Laurens Vanthoor (Belgium) shared driving duties in the sister car with the starting number 92. In the two four-hour test sessions, they covered a distance of 940,194 kilometres and turned the seventh best lap time. Timo Bernhard from Germany, Romain Dumas (France) and Sven Müller (Germany) completed 65 laps and 885,69 kilometres. They share the cockpit of the #94 racer from Weissach and posted the fourteenth best time.

The race starts on Saturday, June 16, 2018, at 15.00 hrs CEST. Eurosport 1 broadcasts round two of the World Endurance Championship live and free-to-view. The TV channel also airs the free practice and qualifying sessions. Sport1 televises highlights of the endurance race in a 60-minute programme on Monday, 18 June, from 23.00 hrs. This sports channel also provides online clips of the race at www.sport1.de.

Comments on the test
Dr Frank-Steffen Walliser, President Motorsport and GT Cars: “We had a very positive test day. In both GTE-Pro and GTE-Am class the 911 RSR clocked the fastest time. All up, the ten 911 RSR completed a total of 613 laps. It’s particularly pleasing that there were no major incidents in the Am class. This shows that all teams are coping well with the car and that’s vital preparation for Le Mans. In the Pro class test you could see that the field is very close and the speeds reached are considerably faster than last year. Everything ran according to plan at the pre-test for the two GT teams.”

Pascal Zurlinden, Director GT Factory Motorsport: “The test day was a great practice for the Le Mans race weekend. We used the test sessions intensively to continue our setup work and to get used to the tyres and racetrack. Everything went to plan and we experienced no technical hiccups. We didn’t use any tactics but instead drove all-out. It’s not our philosophy to hide things. And besides, you can’t learn anything by doing that.”

Gianmaria Bruni ( 911 RSR #91): “It was a great feeling to present our beautiful car with its special paintwork on the racetrack at Le Mans for the first time. That makes you very proud. During the tests we ticked off our tasks meticulously and are very pleased. We can now head to the 24 Hours of Le Mans feeling optimistic.”

Richard Lietz ( 911 RSR #91): “The Le Mans circuit has improved a lot since last year. It now offers significantly more grip and there’s less debris on the track. We managed to complete our programme and we’ve found our rhythm. The 911 RSR ran exceptionally well. The retro design has truly overwhelmed me. I admire all the employees who had the courage and the power to pull this off. As a driver it’s wonderful to climb into such a beautiful car. But at the end of the day it also has to be fast – and it is.”

Frédéric Makowiecki ( 911 RSR #91): “It’s great to be back here, especially as a Frenchman. Le Mans is an absolute highlight for almost every race driver. Our RSR was very well balanced. The pre-test is a great chance to see where we stand and to check out what still needs to be done. As always, our plan was to test the real performance and not to strategise.”

Kévin Estre ( 911 RSR #92): “The work during the test day was very intensive. We were able gain a lot of data and insights. Unfortunately, I encountered a lot of traffic and caution phases during my stint, so I couldn’t push quite as much as I’d hoped. Our 911 RSR was good and of course its design attracted a great deal of attention. It’s feels good to get a lot of encouragement from the fans, but it’s even better when it comes from other race drivers.”

Michael Christensen ( 911 RSR #92): “The test went very positively. The car ran just as we’d expected. We’re well prepared for the race in 14 days. I’m proud to drive the RSR with the retro design. I really like it. And I also hope we make the team proud at the 24-hour race.”

Laurens Vanthoor ( 911 RSR #92): “I personally like to do things differently than others. That’s why I think the new design is extremely cool. The test ran well. We managed to collect a lot of valuable data.”

Patrick Pilet ( 911 RSR #93): “At the beginning of the tests the track was still very slippery so we had to be a bit careful. But over the course of the day it was very good. We tested at full power. The car’s balance was really great. Due to this I could finally score the fastest lap time.”

Earl Bamber ( 911 RSR #93): “We’re contesting the GTE-Pro category with four 911 RSR this year. You get a lot of data and information from such a test. Our task as a team is to pull it all together and make the most out of it. We’re well on our way. I’m looking forward to the race in two weeks.”

Nick Tandy ( 911 RSR #93): “For us as a team, and by that I mean us drivers and the mechanics and engineers, the test went very well in getting the procedures right at such a special race. We also worked on the setup and tested the tyres.”

Timo Bernhard ( 911 RSR #94): “We were repeatedly thrown out of our rhythm by the many slow zones and red flags, especially during the morning session. I’m particularly pleased to share a 911 RSR with Sven Müller and my old friend Romain Dumas.”

Romain Dumas ( 911 RSR #94): “I travelled straight from the Blancpain GT Series at Le Castellet to Le Mans. We were able to cover many kilometres with the 911 RSR on the track and gain confidence. The conditions for the test were good. The 24-hour race will be a close race, the different teams are not separated by much.”

Sven Müller ( 911 RSR #94): “Today I turned my first laps at Le Mans in the new 911 RSR. The track is truly impressive: It’s a fascinating mix of long straights and ultra-fast corners like the Curves. With Timo Bernhard and Romain Dumas I have two very experienced teammates who are already outright winners at Le Mans. Their advice helps me a lot in preparing myself optimally for the race.”

Jörg Bergmeister ( 911 RSR #56): “The test was very difficult for us. We didn’t find the right rhythm. And there were constant interruptions. I hope things run more smoothly in the race.”

Julien Andlauer ( 911 RSR #77): “I’m really excited. The car felt very good and is well balanced. There are always things that need improving, but with the fastest time in the Am class I am for sure more than satisfied.”

Christina Nielsen ( 911 RSR #80): “Le Mans 2018 has certainly begun very adventurously. On Saturday I contested an IMSA race in Detroit. Straight afterwards I caught a night flight to France so that I could be on time to jump in the car for the pre-test. In this respect it’s the perfect preparation for night and morning stints in the race when you climb into the cockpit with little sleep.”

Ben Barker ( 911 RSR #86): “We worked on several things with the setup and were able to collect a lot of new data. The RSR handles well and the balance gives us drivers a good feeling.”

Matteo Cairoli ( 911 RSR #88): “Le Mans is simply something special. As a kid I always dreamed of racing here, and this is now my second time. The 911 RSR completed the test programme without any problems. We were able to work intensively on the setup.”

Patrick Long ( 911 RSR #99): “Today it was very important to figure out a routine for the work procedures at Le Mans. Because of the interruptions in the first session of the day, we had to use the afternoon to work more intensely. We’re well prepared for the big race.”