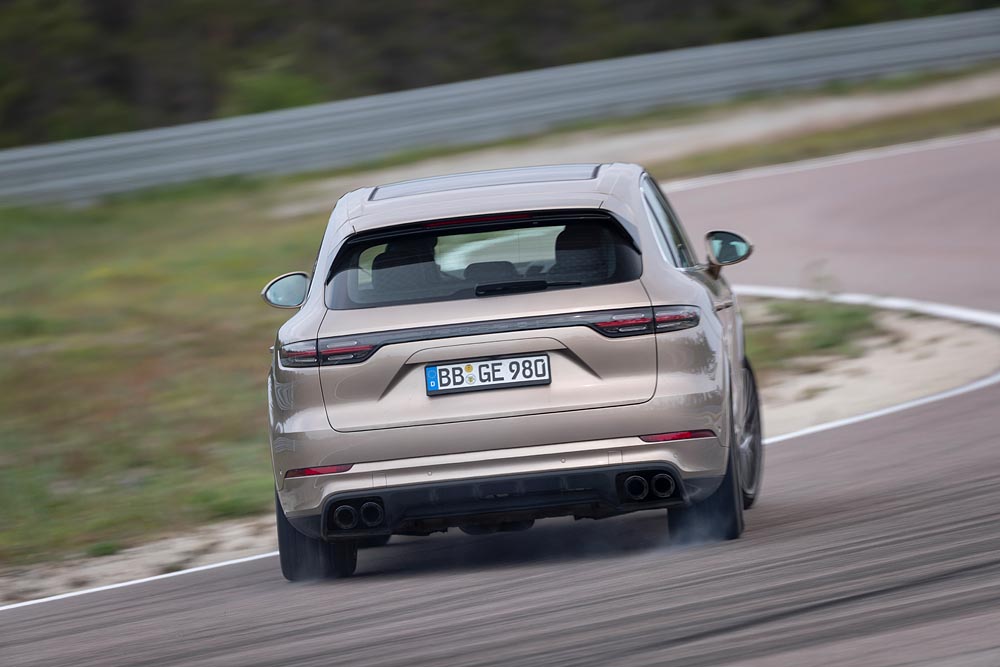 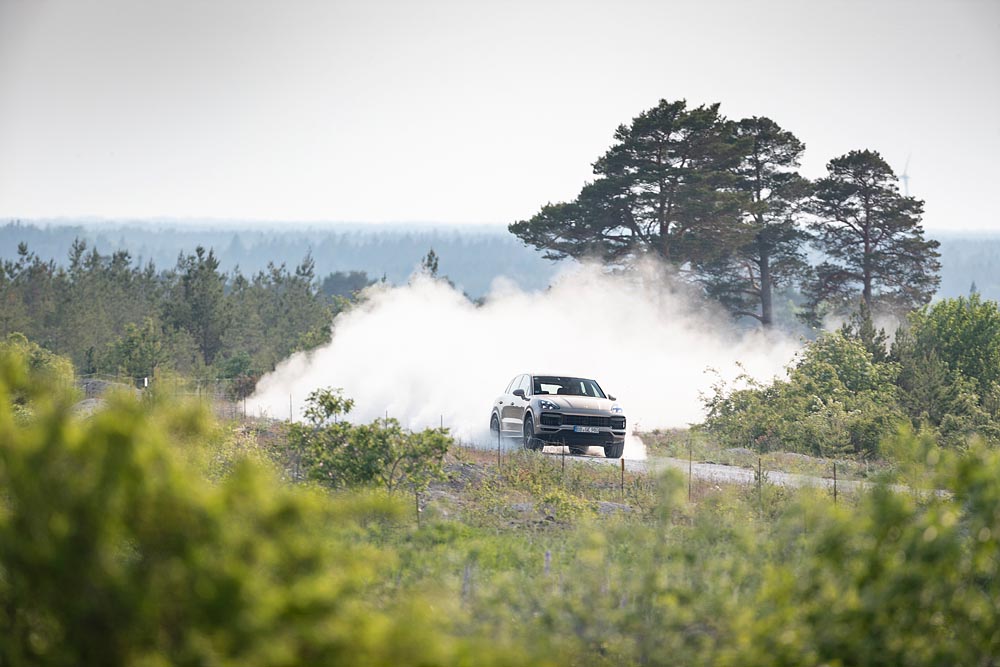 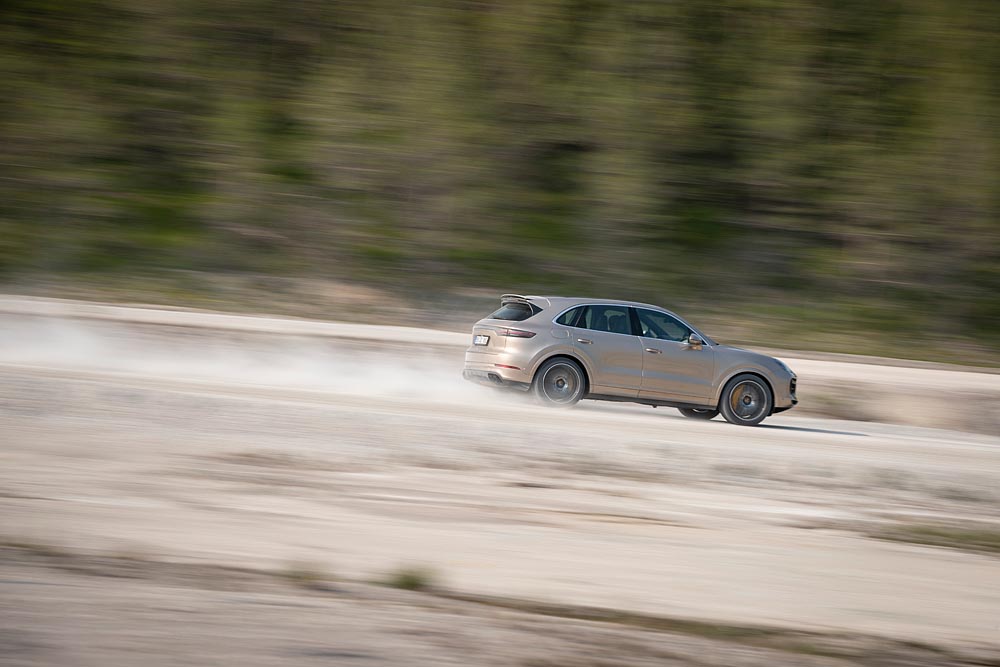 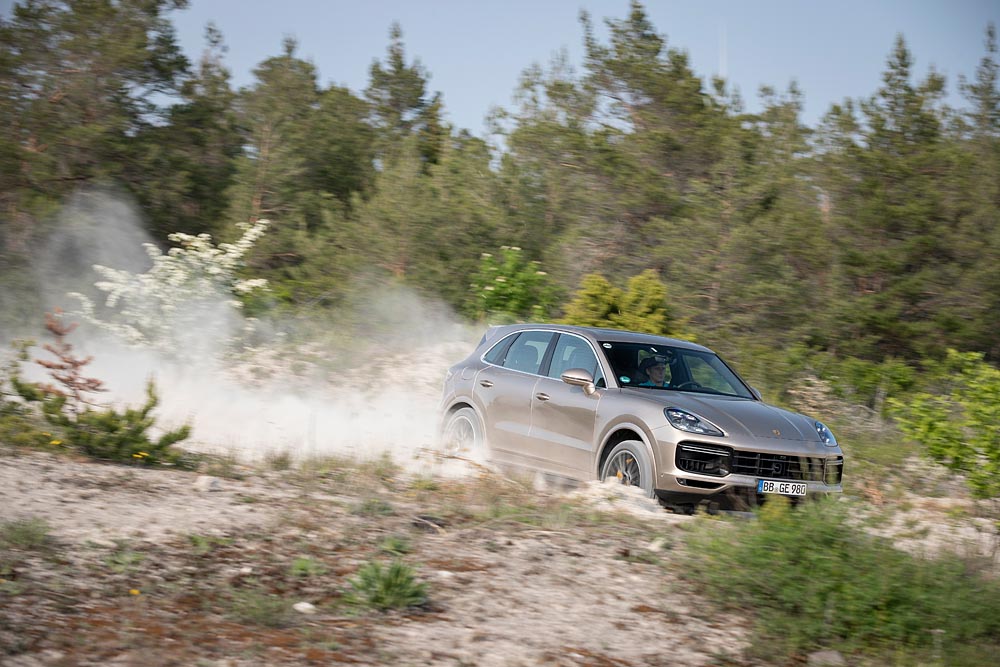 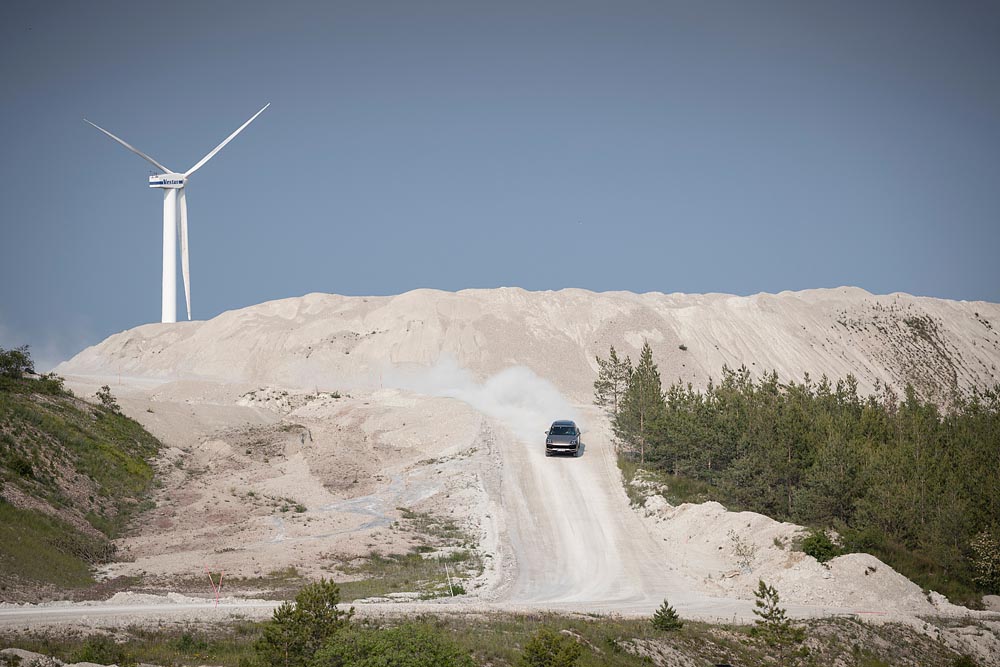 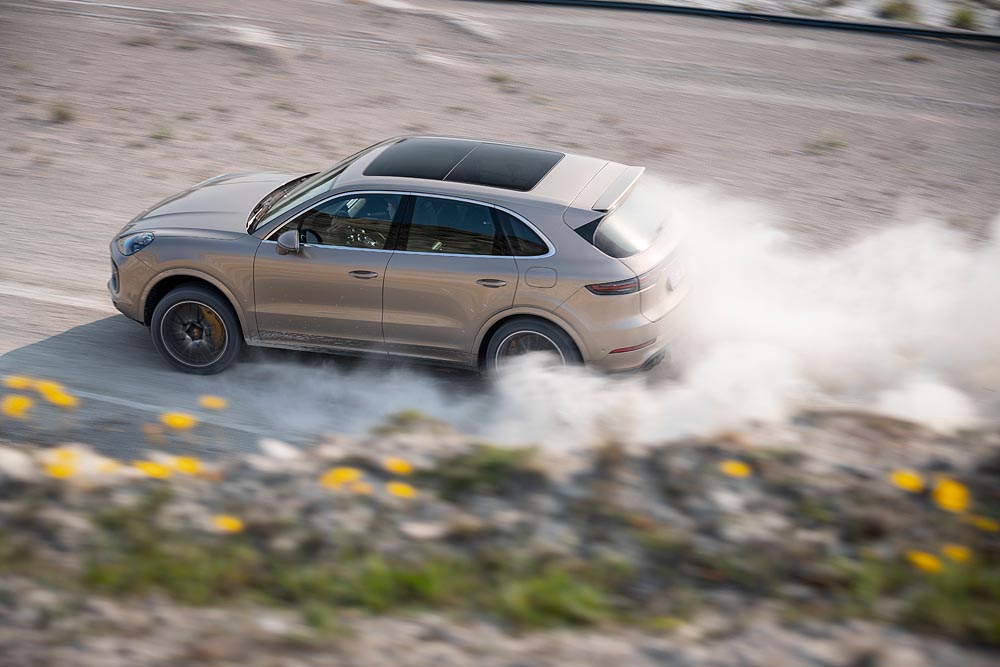 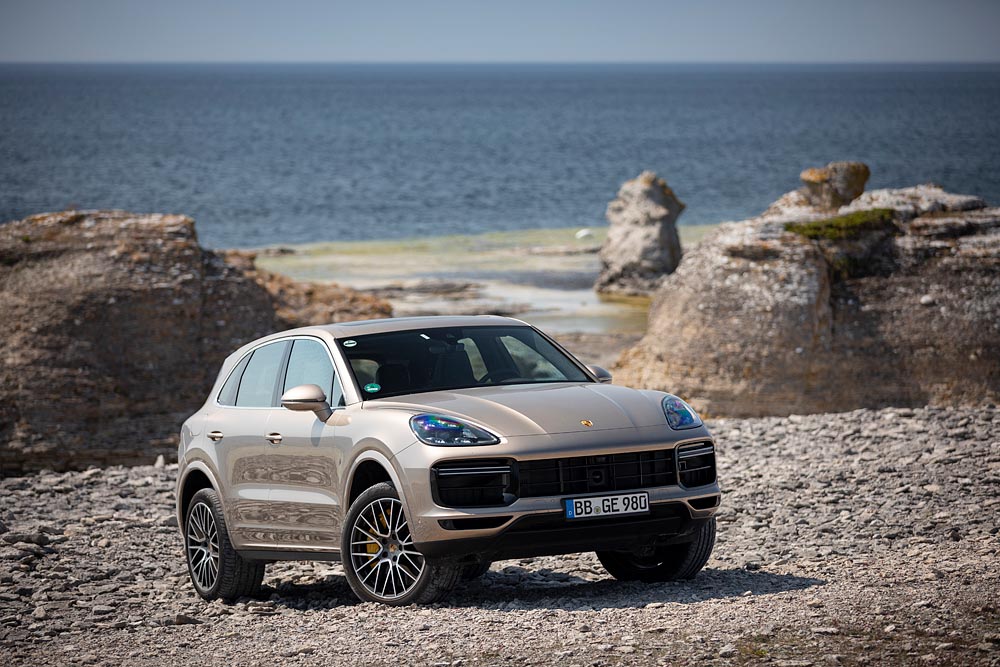 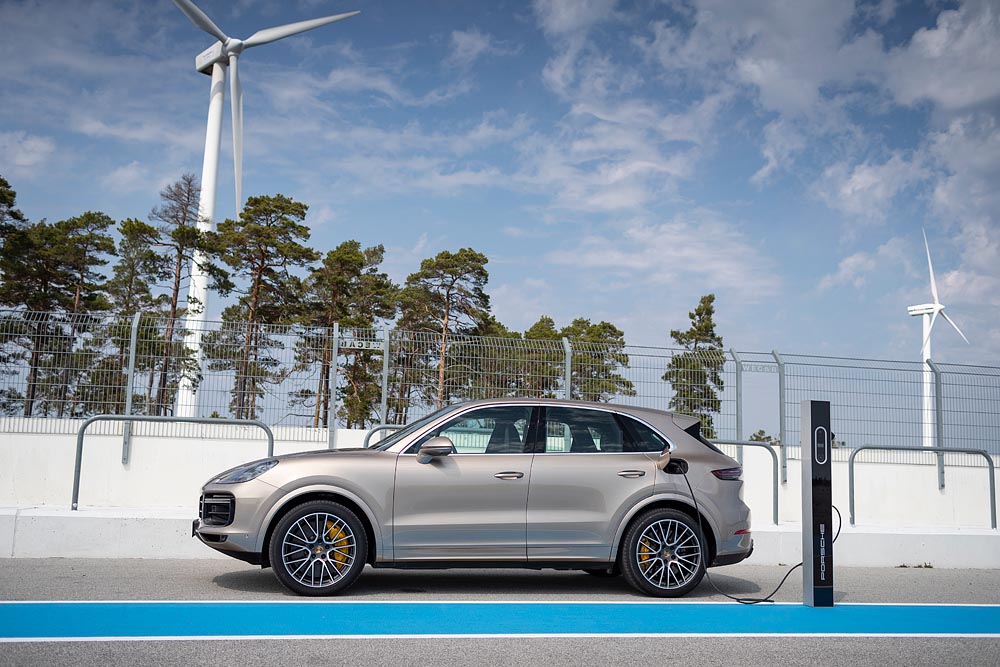 Stuttgart . The S is the most powerful and fastest yet. Its power output of 500 kW (680 PS) and its maximum torque of 900 Nm enable it to accelerate from zero to 100 km/h in 3.8 seconds and reach a top speed of 295 km/h. A variety of innovative chassis systems enables a perfect combination of sports car agility, long-distance comfort and off-road capability.

The new top-of-the-range model demonstrated typical performance on different types of terrain as part of an unofficial record lap at the Gotland Ring in Sweden. The race track in the North of the Baltic island with the same name is only partly surfaced with asphalt: while a 3.2-kilometre long section is already in use, an additional 4.2 kilometres of the overall track, set for completion at the end of 2021, is surfaced with gravel. The circuit and gravel section were combined for a film shoot. German racing driver and TV presenter Tim Schrick completed a lap in a manually timed 3 minutes and 51 seconds.

“It was rallycross with a powerful hybrid SUV – an impressive experience,” test driver Schrick remarked. “The lap time shouldn’t be taken too seriously. We don’t have any lap times to compare it with and the vehicle was fitted with used road tyres. However, the way the S completed laps of the Gotland Ring underlined its outstanding performance and diversity. Thanks to the car’s precise feedback, both on asphalt as well as gravel, and the perfect combination of the different chassis systems, it can be driven on the limit almost playfully and still controlled safely at any moment.”

The S features a host of standard chassis systems designed to boost performance. They simultaneously increase driving safety and comfort. Only the rear-axle steering is an optional extra on the top-of-the-range model.

The S ’s chassis systems include:

Traction Management (PTM) featuring an electronically controlled, map-controlled multi-plate clutch: the active all-wheel drive controls the distribution of propulsion between the rear and front axles. For optimum traction during enthusiastic driving, the power at the front wheels is controlled when cornering to allow the tyres to build up optimum cornering stability. Off-road, the system uses the fully variable distribution of power between the axles to provide maximum propulsion.

Three-chamber air suspension: the air suspension features three chambers per spring strut and is capable of realising different spring rates. For maximum comfort, the suspension is set to a low spring rate. During strong pitch and roll movements, the system immediately switches to higher spring rates for optimum body stabilisation. Overall, the system offers five vehicle ride heights in addition to the normal level. With the exception of the loading level, these are automatically set depending on the driving situation and the driving mode selected. Of course, the driver has the option of manually controlling the desired height via the PCM at any time. The only exception is the “Low” setting, which is activated automatically from 210 km/h and provides more stability when driving at high speed. The S ’s ground clearance varies between 245 and 162 millimetres when being driven.

Active Suspension Management (PASM): the electronic shock absorber system actively and continuously controls the damping force for each individual wheel depending on the condition of the road surface and driving style. Sensors record the SUV’s body movements generated during hard acceleration, braking, fast cornering or driving on an uneven road surface. The 4D-Chassis Control control unit uses these parameters to calculate the vehicle’s status and controls the damping firmness depending on the currently selected driving mode.

Dynamic Chassis Control (PDCC): the electromechanical roll stabilisation system works with 48-volt technology and is capable of adjusting the torsional rigidity of the anti-roll bars on the front and rear axles in milliseconds, in order to actively stabilise the vehicle body. At lateral accelerations of up to 0.8g, any sideways movement is suppressed in a with two occupants. The anti-roll bar is split into two parts, with the halves joined together by a pivot motor. Depending on the body’s roll angle, the motor rotates the two halves in opposite directions, keeping the vehicle level.

Torque Vectoring Plus (PTV Plus): PTV Plus combines an electronically controlled, fully variable rear differential lock with targeted braking interventions on the inside rear wheel when cornering. During highly dynamic driving, the system improves the steering behavior and steering precision as well as the vehicle’s traction. Already at the entry of a corner the system provides its benefits: the inside rear wheel is selectively braked as soon as the steering wheel is turned. This difference in torque induces a yawing moment which additionally supports the steering action. The result is a significant increase in agility and steering response. In addition, PTV Plus noticeably improves traction when accelerating out of corners via targeted locking of the differential.

4D-Chassis Control: a central control system links all chassis systems with each other. It analyses all three dimensions (longitudinal, lateral and vertical acceleration). The optimum driving condition information is then calculated and made available to all relevant systems. This provision of information in real time represents the fourth dimension. 4D-Chassis Control enables the chassis systems to work proactively to anticipate the driving environment.

Rear-axle steering (optional): the axles steer in opposite directions at speeds of up to approximately 80 km/h. This not only ensures significantly higher agility and steering precision, but also makes manoeuvring easier. At higher speeds, both axles steer in the same direction, resulting in even greater driving stability, for example when changing lanes on the motorway at high speed. The maximum steering angle used on the rear axle is three degrees. Thanks to this system, the new steers without delay and builds up lateral acceleration at the rear axle much sooner. Rear-axle steering also boosts comfort and safety in day-to-day driving; the car’s turning circle is reduced from 12.1 to 11.5 metres.

The fuel consumption and CO2 emission values were calculated according to the new Worldwide Harmonised Light Vehicle Test Procedure (WLTP). The NEDC values derived from this must continue to be specified for the time being. These values cannot be compared with the values calculated on the basis of the previously used NEDC measuring procedure.