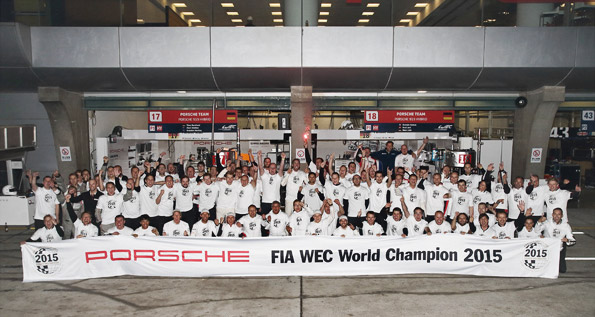 Stuttgart. By taking the fifth victory in a row has made itself a World Champion in Shanghai. One race before the season’s finale no one can take away the constructors’ title in the FIA World Endurance Championship (WEC) from the young team from Weissach. In China the winning drivers were Timo Bernhard (DE), Brendon Hartley (NZ) and Mark Webber (AU) in a six-hour race of which two thirds were held on a wet track. The sister car of Romain Dumas (FR), Neel Jani (CH) and Marc Lieb (DE) finished second and hence the season’s fourth one-two victory for the team.

The drivers’ world championship title will be decided at the season’s finale in Bahrain on November 21. drivers Bernhard/Hartley/Webber are leading with 155 points ahead of three Audi drivers who have scored 143 points.

How the race went for car number 17:
After the start behind the safety car the race goes green at the end of lap four and pole-setter Brendon Hartley stays in front. After 33 laps he comes in for refuelling and takes another set of rain tyres. The team uses the third of several full course yellow periods for the next pit stop and Timo Bernhard takes over after 52 laps. The conditions still only suitable for rain tyres. The lead is temporarily lost to the number 8 Audi and on lap 57 the number 7 Audi also overtakes Bernhard. On lap 61 the sister with Neel Jani at the wheel passes Bernhard as well. As the Audis pit, Bernhard lies second behind Jani. The following pit stop doesn’t change the order. Bernhard comes in for fuel only after 84 laps and then reduces the gap to Jani. On lap 101 the two 919 Hybrids swap positions because the number 17 car is the faster one at that point of time. Bernhard hands over the leading car to Mark Webber after 115 laps, and now slick intermediate tyres are the call. After 132 laps Webber changes to pure slick tyres and continues to lead the race. At the end of lap 154 Webber comes for his last refuelling stop and gets another set of slick tyres. He then drives directly behind Romain Dumas until the sister car has to refuel – and number 17’s way to victory is clear.

How the race went for car number 18:
Marc Lieb starts from P2, briefly moves into the lead when Hartley has difficulties with boost, but then gets pushed off the track by André Lotterer in his Audi number 7. Lieb rejoins the race as the last car. He then overtakes 25 cars within five laps to catch the LMP1 cars. At the end of lap eleven he overtakes the number 2 Toyota for fifth. After 33 laps he pits for fuel and another set of rain tyres. The team uses the third full course yellow period for the next stop. Lieb hands over to Neel Jani, who continues on another set of full wets. Jani is fourth but improves quickly. On lap 72 he takes the lead from the number 7 Audi. After 83 laps he comes in for fuel only and stays in the lead. On lap 101 Jani lets Bernhard pass because he has high brake temperatures temporarily. After 114 laps, Jani hands over the car to Romain Dumas who gets slick intermediate tyres. A misunderstanding when lapping another car leads to a spin on lap 126 and causes Dumas to drop back to third until the number 8 Audi has to pit. After 132 laps, Dumas pits for slicks. He rejoins in fourth but takes the lead after the pit stops of the Audis and his team mate. After a final ‘splash and dash’ at the end of lap 162 he finishes second.

Fritz Enzinger, Vice President LMP1: “For sure it will take some time until it really sinks in what we have achieved today. In what is only our second year in the WEC, we first won Le Mans and then took the World Championship title – it is difficult to believe this has happened. Due to the changing weather conditions this six hours here were extremely tense for us. Thanks to everybody who has worked hard for this success, at our home base in Weissach and generally at . Now we will try to secure the drivers’ title, too.”

Andreas Seidl, Team Principal: “First of all I want to thank everyone at home in the work shop in Weissach and here on site. This title really belongs to all of them. After an already difficult race in Fuji, I think today was another strategic master piece. We could rely on our Michelin tyres every moment and under all circumstances. We stayed focussed despite any problems we had, especially regarding our number 18 car. Those drivers fought their way back from being last to first in an unbelievable manner. Crew number 17 is on a great run at the moment and it continued here, they well deserved that win. Our mechanics today were the best in the pit lane.”

Alexander Hitzinger, Technical Director: “We have won Le Mans in our second year and now the constructors’ world championship, plus we have dominated every single qualifying – you cannot ask for more. I am really proud on this team. We have been aggressive in our development and didn’t accept any compromise when it was about performance but we accepted the risks of that as well. Nevertheless we have managed to get the 919 Hybrid reliable too.”

Timo Bernhard (34, Germany): “It was an action packed race. When I jumped in the car the track was really very wet. A full course yellow was on and I drove between the two Audis in a lot of spray. Actually I had to familiarise myself with the conditions because I didn’t do a single lap in the wet before and didn’t want to take too much of a risk. The car was fast. When the track was drying, it definitely was the fastest of all. I had nice battles with the Audis and with Neel. In the end I could take the lead and we have reached our great target today.”

Brendon Hartley (25, New Zealand): “It wasn’t a bad start and my two stints in the early race went smoothly. The conditions weren’t easy, especially when the rain got stronger. That was around lap 45. Visibility was very poor and there was aquaplaning too. I obviously had to push because there was pressure from the Audis but I managed it with zero mistakes and handed over a leading car to Timo.”

Mark Webber (39, Australia): “What this team has done in such a short period of time is just incredible. I have been involved in some pretty professional motor sports projects and I must say it is impressive to come to this level and have this results this year. It’s really hard to produce these cars and this top performance week after week. The constructors’ title is great for and everyone was working hard. Racing for these guys is amazing.”

Romain Dumas (37, France): “It was a great race and the result for is amazing. Our sister car was strong today and deserved to win. I had to take more risk than should have been necessary because I made a mistake when I was following Mark and spun so I had to catch up.”

Neel Jani (31, Switzerland): "Marc did a super job to bring back the car to the leading group in the race after the incident on lap one. When I took over, it was raining quite heavily. The visibility was very poor and there was aquaplaning. But the car was superb in this condition. I could attack and found my way from P4 to take the lead. Towards the end of my first stint I had trouble with the brake temperature and that was tricky. On a half wet or wet track, no one wants an unpredictable brake balance. I had a few moments when I almost went off. So my stint had a bit of everything.”

Marc Lieb (35, Germany): “I had a good start, unfortunately then on lap one I was hit and pushed off the track. I had difficulties starting the car again, which did cost some extra time. Then I went on my journey through the field. In the beginning the car was a bit understeery but then it became good and it became even better in the heavier rain.”