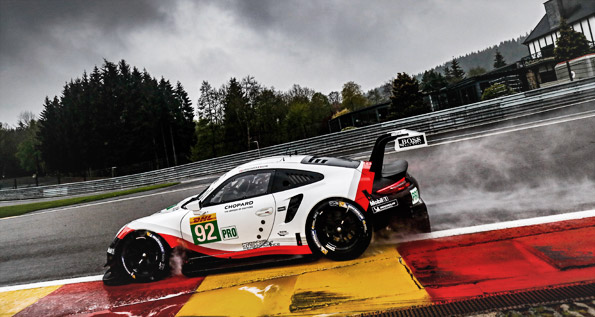 Stuttgart. In qualifying for round seven of the FIA World Sports Car Championship (WEC) at Spa-Francorchamps, the two 911 RSR fielded by the GT Team landed on grid positions seven and eight. The world championship leaders Kévin Estre (France) and Michael Christensen (Denmark) lapped the 7.004-kilometre racetrack near the German border in an average time of 2.13.683 minutes and will take up the six-hour race on Saturday from seventh place.

Under cloudy skies and temperatures of ten degrees Celsius, Richard Lietz (Austria) and Gianmaria Bruni (Italy) were just 0.153 seconds slower than their brand colleagues on the “Ardennes rollercoaster”. The No. 91 sister car takes up the race from eighth place directly alongside the 911 RSR of Estre and Christensen.

In the overall classification, the GT Team holds a 100-point lead over the competition. The factory squad from Weissach can even claim an early world championship title on Saturday (race start 13.30 hrs).

In the GTE-Am class, the Dempsey Proton Racing team narrowly missed out on scoring pole position. The No. 88 911 RSR driven by Young Professional Matteo Cairoli (Italy) and the Italian father-son duo Gianluca and Giorgio Roda take up the race from second on the grid. The third spot is occupied by Project 1, who currently leads the overall classification. works driver Jörg Bergmeister (Germany) shares driving duties in the 911 RSR with the American Patrick Lindsey and Egidio Perfetti from Norway. Fourth quickest in qualifying was the second 911 run by Dempsey Proton Racing with drivers Christian Ried (Germany), Young Professional Matt Campbell (Australia) and Riccardo Pera (Italy). Gulf-Racing with Young Professional Thomas Preining (Austria) and the two British racers Michael Wainwright and Benjamin Barker concluded the qualifying session on eighth.

Pascal Zurlinden (Director GT Factory Motorsport): “That wasn’t our best qualifying. We’d hoped to be in the top five. Unfortunately not everyone got a perfect lap or their good lap was annulled. The competition is very tight. If we scored this result in tomorrow’s race we’d be manufacturer world champions. So, nothing is lost yet. And anything is possible in a six-hour race, especially with the weather forecast predicting rain and possibly even snow.”

Richard Lietz ( 911 RSR #91): “The car, the balance and the fast lap were really good. It’s always tricky in cool temperatures to get the brakes up to temperature in the first few laps, but it worked well today. In fact, the lap was flawless. We’ll now take some time to look at why it wasn’t enough to be at the front.”

Gianmaria Bruni ( 911 RSR #91): “I had to abandon my first flying lap unfortunately and during the second lap the tyres were no longer perfect, otherwise it would have been enough for a better result.“

Kévin Estre ( 911 RSR #92): “Actually, the qualifying session went rather well. Michael had bad luck during his second hot lap when he encountered a slow car on the racing line. It wasn’t enough for pole position, but the car was good. At the first race of the season in Spa we didn’t start from pole. Here, it’s all about the long run, and we’re usually very good at that.”

Michael Christensen ( 911 RSR #92): “I expected the qualifying to be like this. It wasn’t enough for pole position, but we had the speed. We got the best out of the situation today. Unfortunately, one of our fast laps was cancelled, even though I braked for a slower vehicle. I guess that’s just how it goes sometimes.”