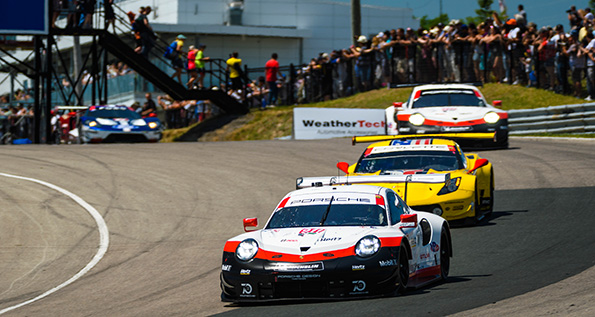 concluded round six of the IMSA SportsCar Championship in Bowmanville/Canada on positions four and six after a long time in the lead. With the #911 911 RSR, the duo Patrick Pilet from France and Britain’s Nick Tandy narrowly missed out on a podium finish in fourth place. During Saturday’s qualifying, Tandy set a new lap record for GTLM vehicles in the Canadian Tire Motorsport Park and posted pole position. Sharing driving duties in the sister car was the current winner of the Le Mans 24 Hours, Laurens Vanthoor from Belgium, and New Zealander Earl Bamber. Both 911 RSR racers were at times looking good for a one-two finish, but were thwarted by many safety car phases and bad luck with the strategy. After round six of the season, ranks third in the manufacturers’ classification of the GTLM class.

Fans at the Canadian Tire Motorsport Park on the outskirts of Toronto were treated to a gripping and turbulent race with six safety car phases. Under clear blue skies and with a temperature of 27-degrees Celsius, both 911 RSR got off the line well in the GTLM class. Tandy took up the race from pole position, with Vanthoor making up one position to manoeuvre the #912 into third place. In the first hour of racing the safety car had to be deployed three times. Both racers used the first safety car phase for perfect pit stops and by the third safety car phase had moved into the lead. The 510 hp 911 RSR race cars then came in for their second pit stop and driver change. Tandy handed the car off to Pilet, with Bamber replacing Vanthoor at the wheel. Unfortunately a jam in the pit lane due to many cars pitting resulted in both cars losing positions. In addition, technical problems with the starter of the number 912 car cost even more time. Pilet and Bamber rejoined the race in positions four and eight. Just a few laps after the pit stop, Bamber’s 911 RSR suffered a puncture and had to return to the pits.

Three more safety car phases followed over the remainder of the race. Shortly before the flag, Pilet and Bamber had fought their way up to positions two and six. In the battle for the lead, Pilet was blocked while attempting to lap a slower car, and two opponents immediately grabbed their chance to get past the Frenchman.

Round seven of the IMSA SportsCar Championship takes place on 21 July at Lime Rock Park in Lakeville/USA.

Steffen Höllwarth, Programme Manager IMSA SportsCar Championship: “This result is obviously very disappointing. We had the fastest car in the field and initially had control of the race. Our rivals took a high risk strategy in the pits and didn’t fully refuel their vehicles so that they could make up positions. On top of that, a puncture threw our #912 car back. We knew that under normal circumstances we would have had the shortest pit time at the last stop. Unfortunately our rivals were then luckier than us during the subsequent safety car phases, so that our strategy today didn’t work for us.”

Patrick Pilet ( 911 RSR #911): “I’m a bit disappointed because things were looking good for us at the beginning of the race. Nick even managed to eke out an advantage. The car was very fast and it felt really good. Unfortunately our plan didn’t pan out today. We now have to analyse exactly what happened and learn from it. Next up is Lime Rock, a racetrack that very much suits our 911. Since the prototypes won’t be racing there, we will be aiming for overall victory.”

Nick Tandy ( 911 RSR #911): “When you have such a well setup car and you start from pole position, fourth place is naturally extremely disappointing. Ford had a lot of luck with the race strategy. Because we were running on tyres with the highest wear, we were virtually unable to attack anymore after the restart.”

Laurens Vanthoor ( 911 RSR #912): “I’m disappointed with the result, of course, especially since we were on first and second at times. Unfortunately we had a technical problem during the pit stop and then a puncture cost us additional time. My stint was actually very good and I managed to overtake several cars. We then tried everything but it just wasn’t possible to get ahead. Unfortunately our strategy didn’t work.”

Earl Bamber ( 911 RSR #912): “Laurens drove a great first stint. The first pit stop went perfectly. At one point we were in third place. Unfortunately a technical problem and puncture relegated us back to eighth place. I fought hard and did everything to conserve fuel, but ultimately we couldn’t gain any more ground.”