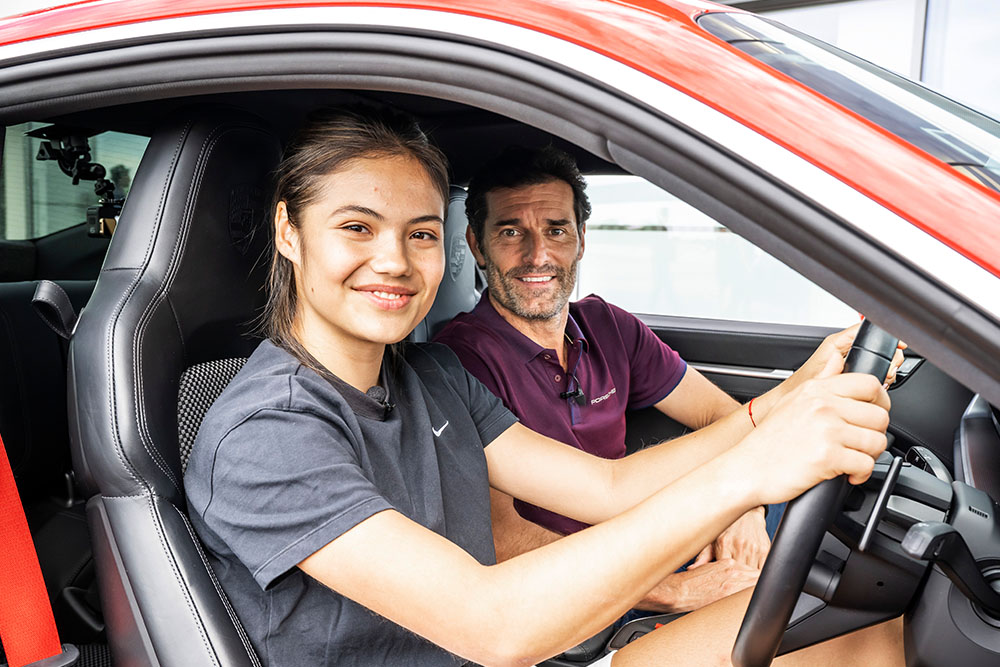 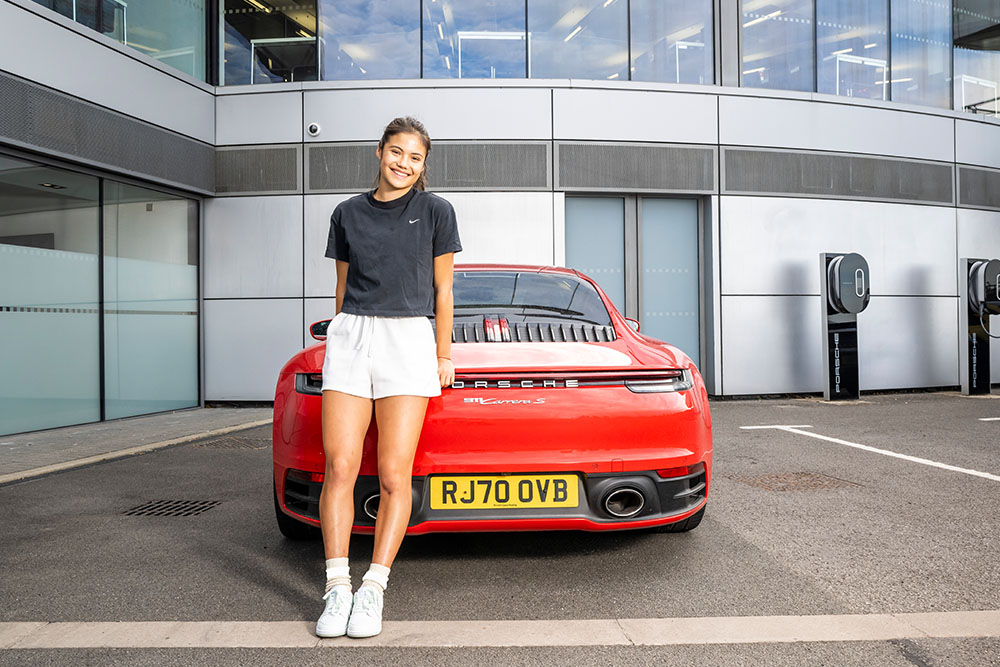 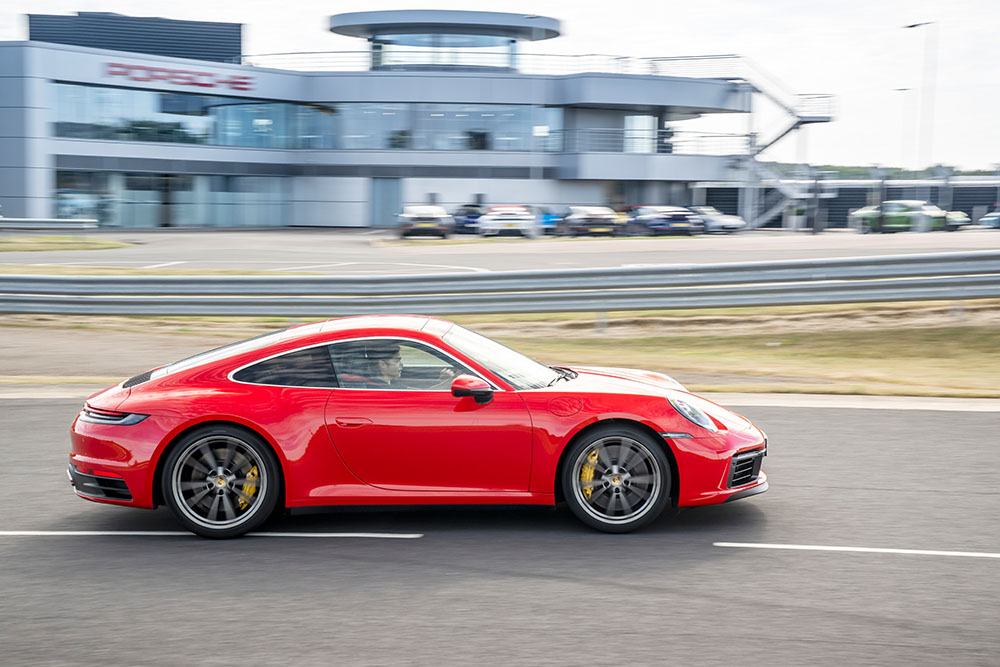 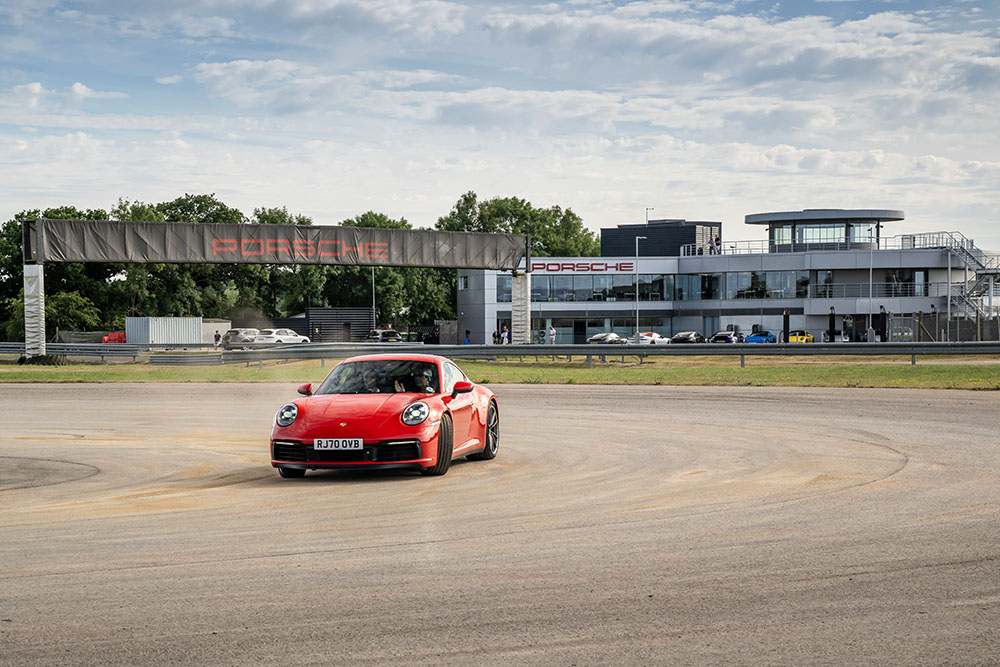 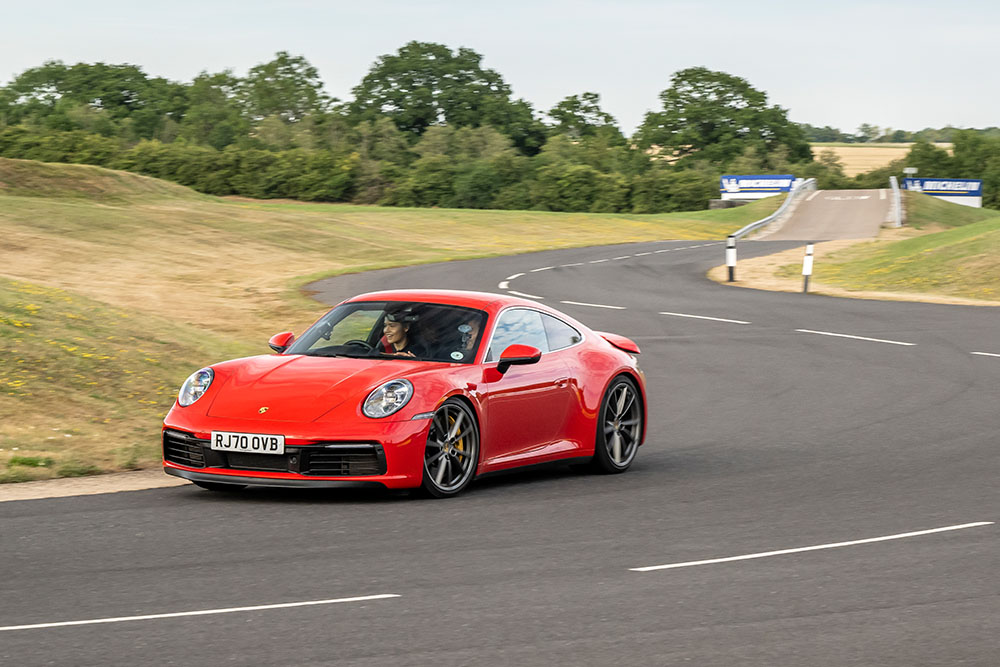 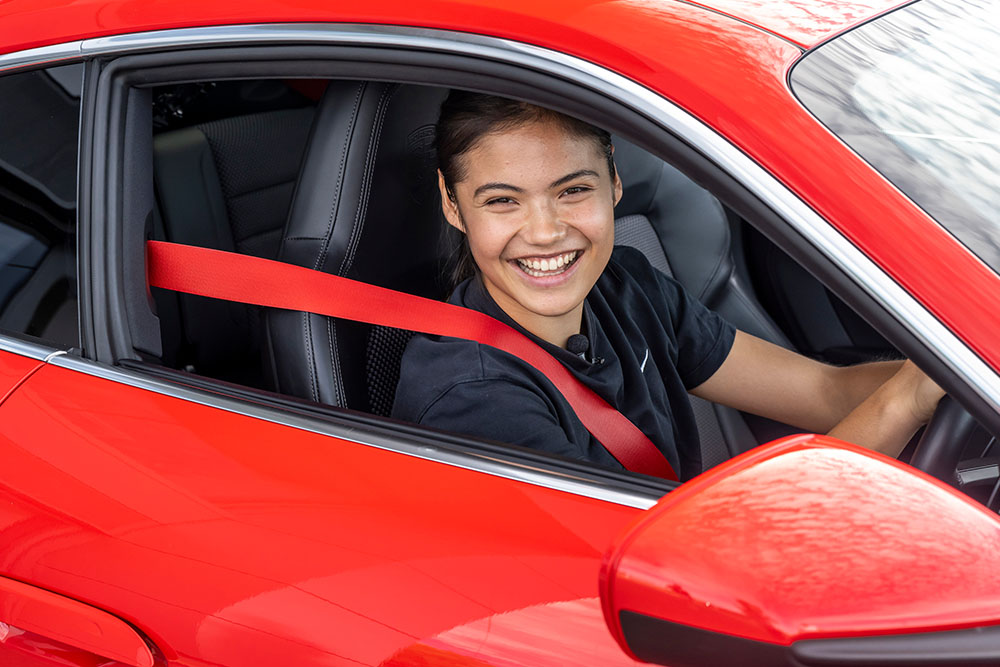 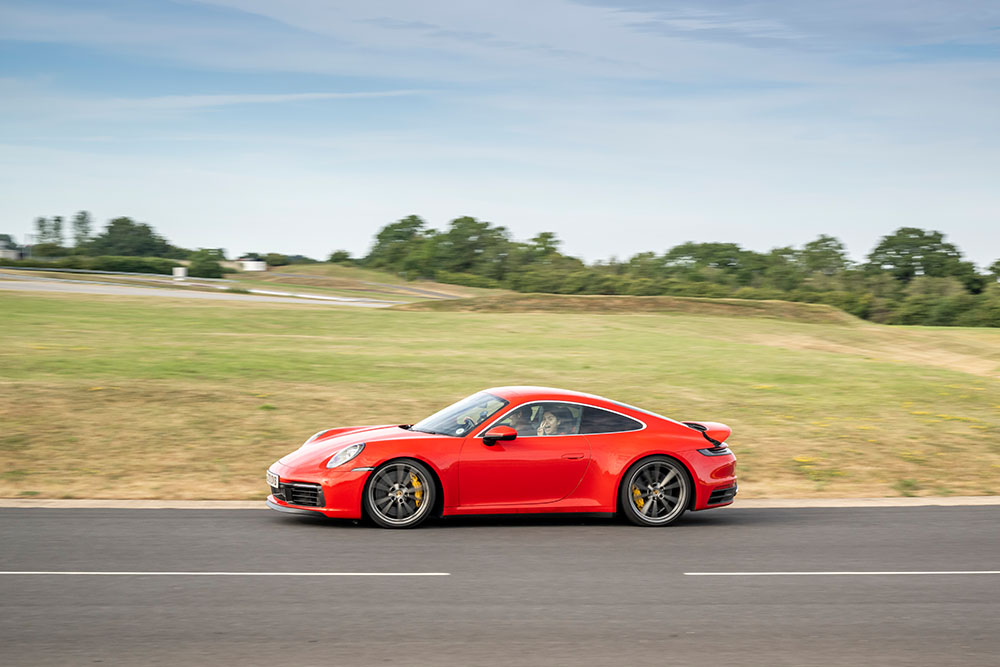 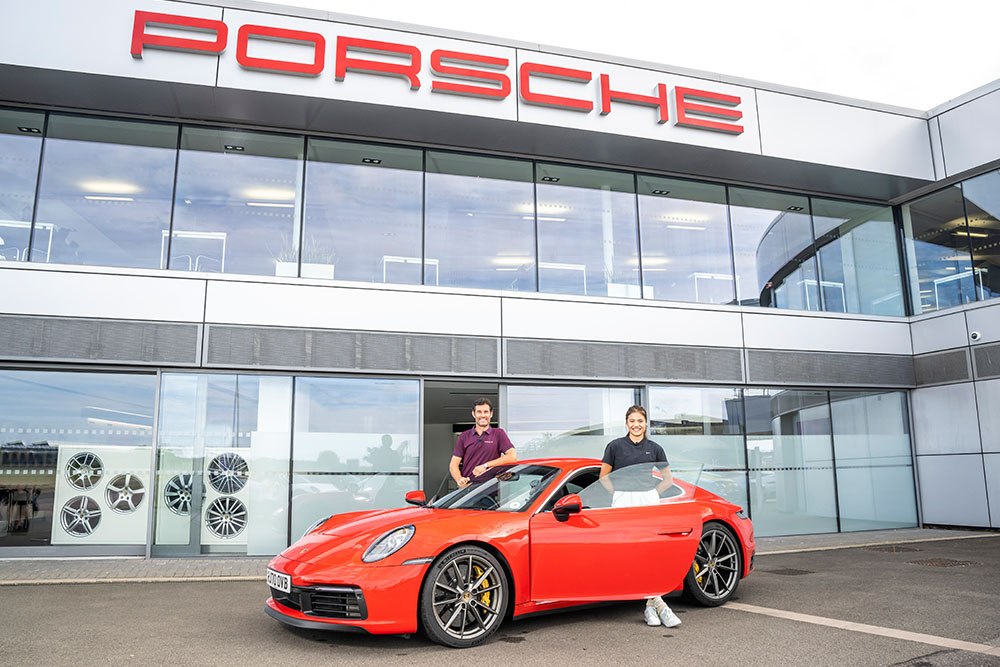 • The Brand Ambassador fulfils a big dream when visiting the Experience Centre in Silverstone.

• The 19-year-old Briton has been a motorsports fan and an admirer of the brand since her childhood.

• In Silverstone, the former kart driver learned how to control a on the racetrack.

• The 2021 US Open champion was particularly impressed by the laps alongside Mark Webber in the 911 S.

Shanghai/Stuttgart. From Wimbledon’s grass courts to the racetrack at Silverstone: tennis star and Brand Ambassador Emma Raducanu lived out her passion for and motorsport at the Experience Centre before travelling to the US tournaments.

The 19-year-old Briton who sensationally won the US Open in 2021 to become the first ever qualifier to triumph at a Grand Slam tournament, has been a motorsports fan and admirer of since childhood. She became a Brand Ambassador in March 2022 and after the Tennis Grand Prix, one of her first appointments took her to Brands Hatch in May for a Cup Great Britain race. At her local track, she met drivers and engineers who gave her an insight into the design and technology of the 911 GT3 Cup cars de-ployed in the popular single marque series.

By visiting the Experience Centre at Silverstone, which sits next to the world-famous Grand Prix circuit, Emma Raducanu has now fulfilled another of her greatest dreams. Backed by the experience of having to adapt quickly to a variety of playing surfaces on the worldwide WTA Tour, the changing grip levels of the specialist tracks of the Experience Centre unfazed the Grand Slam winner as she acquainted herself with the 911 S. With guidance and advice from a Driving Consultant on hand, Emma Raducanu ex-plored the dynamic capability of the 450PS sports car in wet and dry conditions, including test-ing her reactions on the special surfaces that simulate ice and snow driving.

“I found the track really good. It was a lot of fun for me. The performance of the 911 is obvi-ously strong but the power delivery is progressive, so I was able to build up confidence quickly. Over the laps, you can anticipate the car’s reactions more, and I could get into a rhythm,” said Emma Raducanu. “It is like playing a tennis match; learning where to push and how to work with the car to get the best results. My instructor Graham gave me lots of good advice. I learned a lot and am already looking forward to coming back.”

A further highlight of the day was the opportunity for her to join fellow Brand Ambas-sador Mark Webber on track for a few laps. First, she was a passenger alongside the 2015 World Endurance Champion and then the nine-time GP winner and the tennis ace swapped seats, and afterwards the two champs swapped notes on driving styles.

“I have met many top sportspeople and their focus and determination to be the best they can be is always crystal clear,” said Mark Webber afterwards. “Those qualities were plain to see when Emma drove me in the 911 today, the same grit you see on the tennis court!” The en-counter was also special for Emma Raducanu: “It was great to meet Mark and get some in-sight both to winning with at the top level and his own dedication to personal fitness,” she added. “I look forward to driving with him again!”

The programme enjoyed by Emma Raducanu at Silverstone is included as part of every cus-tomer’s purchase of a new in the UK, while each of the nine worldwide Ex-perience Centres offers a range of courses to anyone who wishes to further develop their skills behind the steering wheel, under the guidance of an experienced instructor.

As preparation for the US Open Emma Raducanu will participate in next week’s Western & Southern Open in Cincinnati. is the official car partner of the prestigious WTA1000 event.