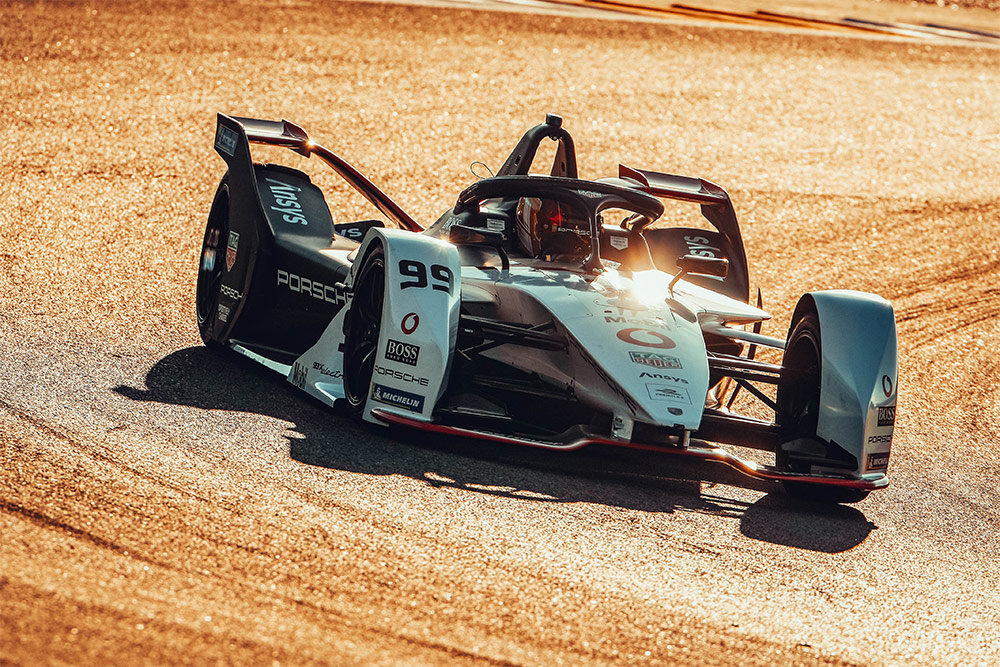 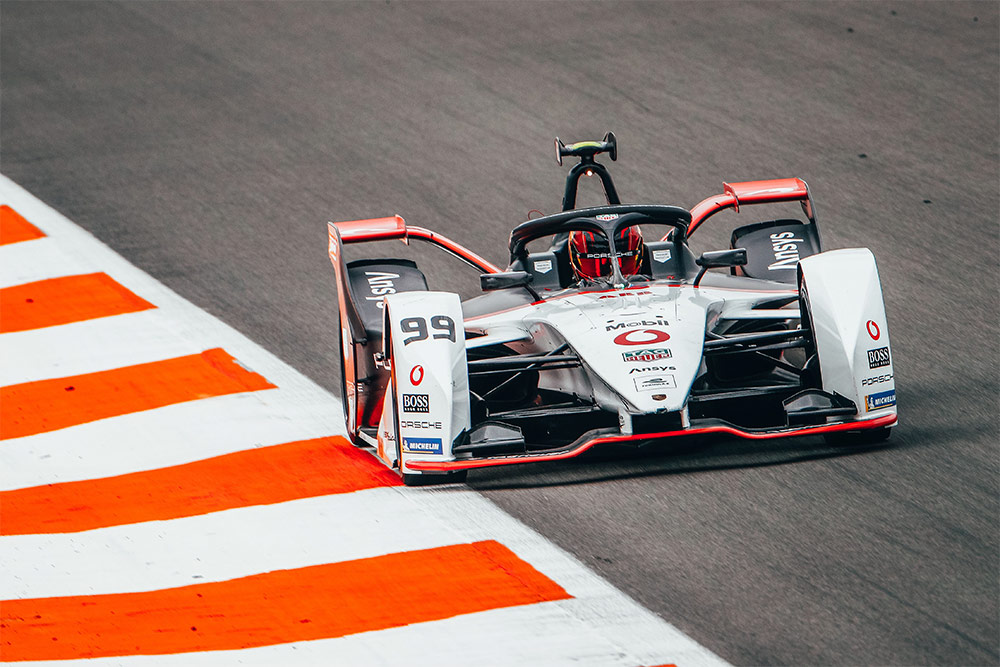 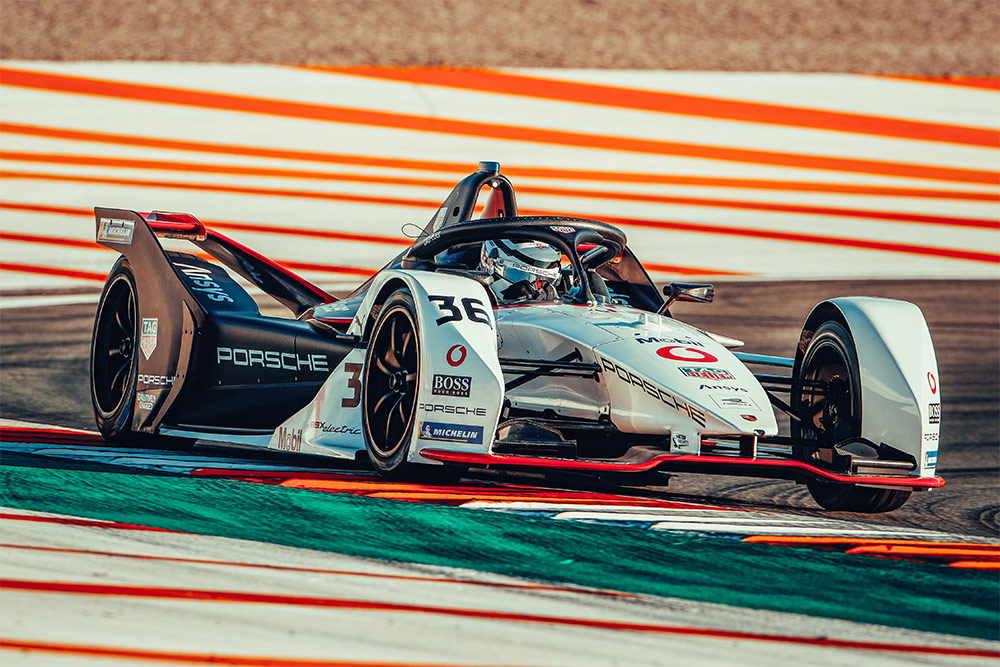 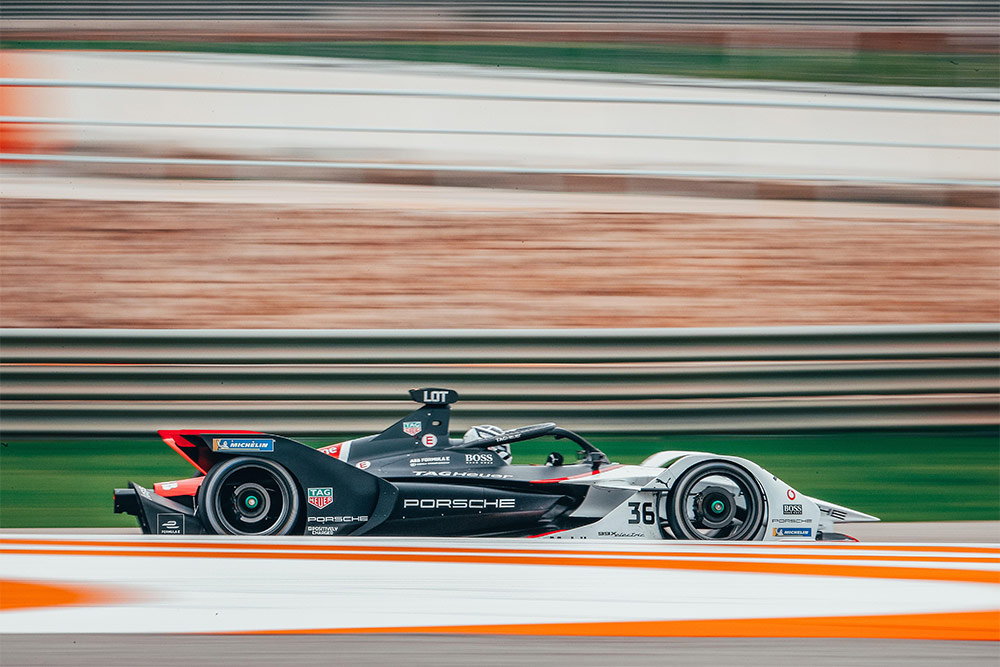 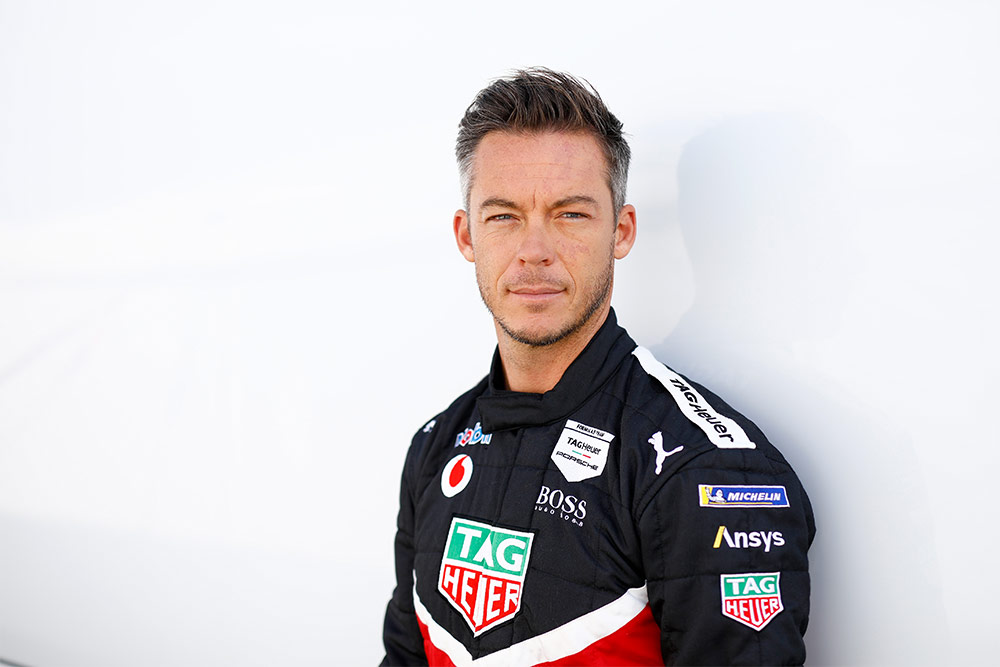 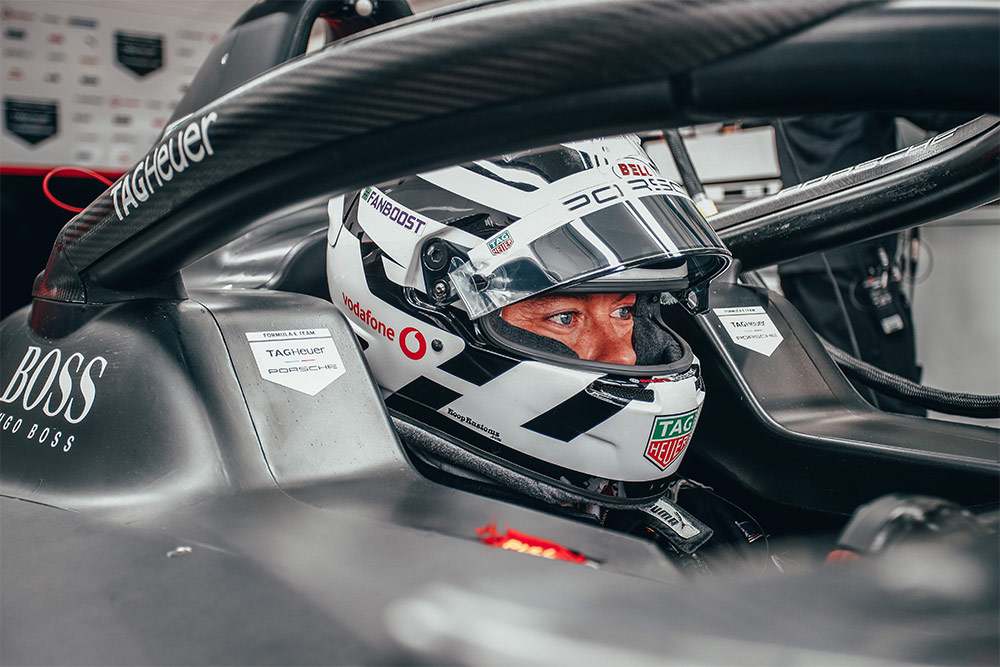 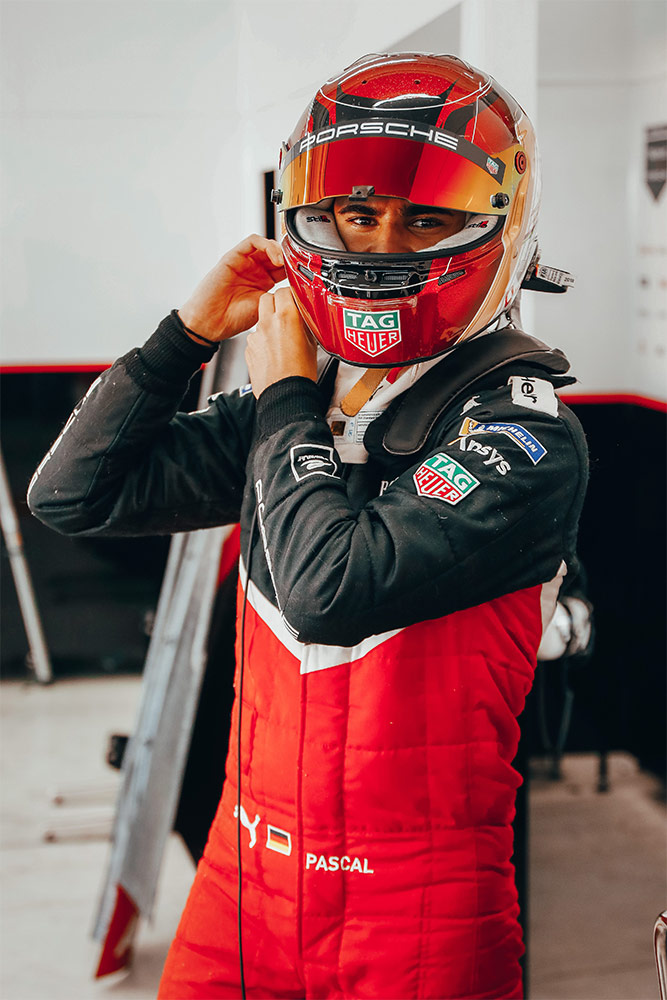 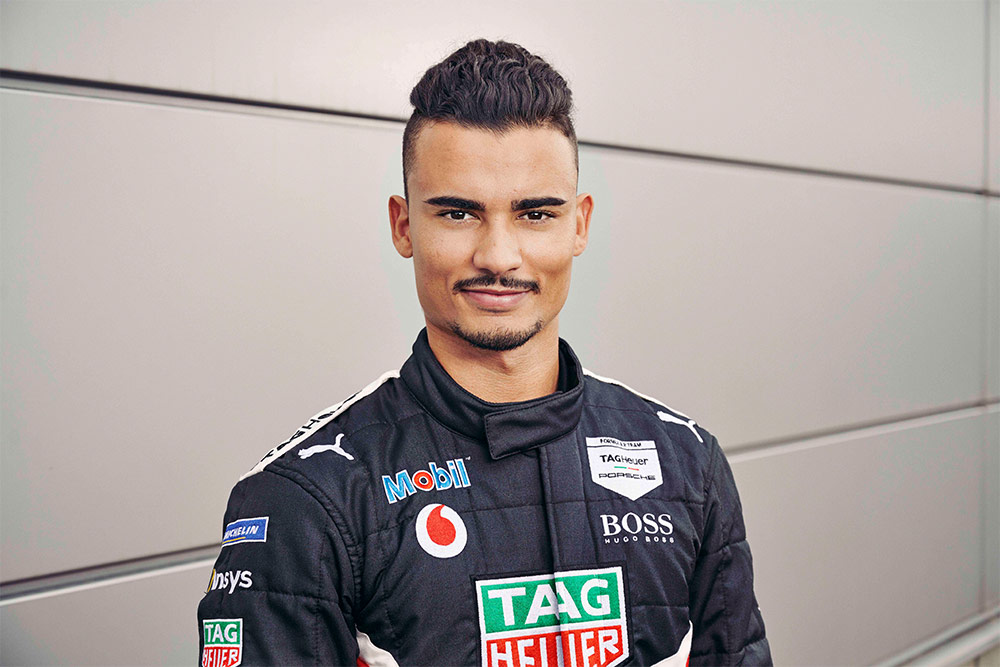 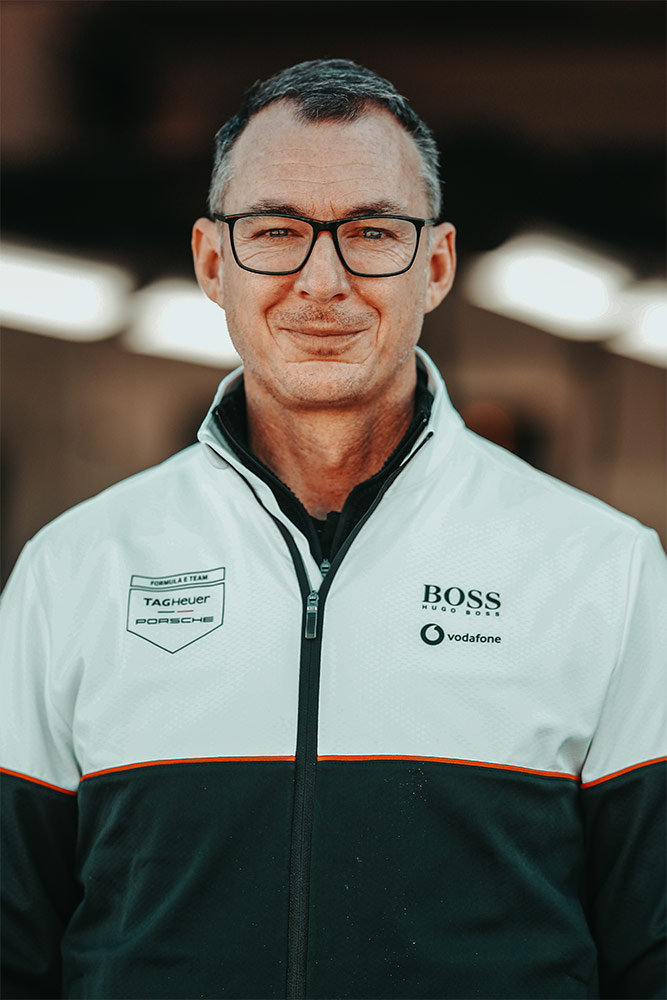 Extensive improvements have been made to the powertrain of the 99X Electric.

Shanghai/Stuttgart. The ABB FIA Formula E World Championship enjoys a novel start to the new season: In Diriyah (Saudi Arabia), two night races will be contested on 26/27 February for the first time in the history of the innovative electric racing series. The TAG Heuer Formula E Team travels to the season-opening doubleheader event with fond memories. In November 2019, the squad celebrated a successful Formula E debut on the street circuit not far from Riyadh, with André Lotterer scoring second place with the 99X Electric. His new teammate, Pascal Wehrlein, contests his maiden race as a works driver in Diriyah. The Formula E season was originally scheduled to start in Santiago de Chile in January, however it was postponed due to the coronavirus pandemic and relocated to Saudi Arabia.

tackles its second season with a very clear commitment to Formula E. The sports car manufacturer uses the fully electric single-seater sport for systematic development work and to expand its expertise in the field of battery-electric drives. After the successful debut season of the 99X Electric, the engineers at Weissach have made extensive improvements to the powertrain. The team has also been restructured: Martin Füchtner takes over the role of Technical Project Leader Formula E. Malte Huneke, who held this position since the launch of the Formula E programme, is now responsible for the overall vehicle development of all Motorsport racing vehicles.

With twelve teams and 24 drivers, the ABB FIA Formula E World Championship boasts another strong line-up in season 7. Ten automobile manufacturers are represented – more than in any other international motor racing series.

A for the Diriyah E-Prix

Waiting for the season to get underway was a real test of patience. Are you and your team excited to start in Diriyah?

“We can hardly wait to finally get racing again after the long break. The start of a new season is always exciting, especially for us. This time, we’re much better prepared and we’re also starting with higher expectations compared to last season. Because of the pandemic, the season was very short. For us as a rookie team, that proved to be a major handicap because we didn’t get the critical track experience due to the cancelled races. Now we’re all hoping for a full and, for us, successful 2021 season.”

How difficult has it been to maintain motivation within the team over the last months – and how important is a successful start to the season?

“That was quite a challenge. We’re a racing team and we want to race. The lockdown had a profound impact – despite all the virtual opportunities that we could utilise for the further development of the 99X Electric. Then came the cancellation of the season-opening round in Chile. However, we’re used to reacting quickly to new developments. Flexibility is part of our everyday life. We’ve always had the team spirit and solidarity, so we’re heading into the 2021 year feeling highly motivated. Obviously, a successful start to the season would help. However, it’s much more important to start with a perfectly prepared car and to always give 100 percent. We’ve been working on this over the past few months. Everything else will then fall into place.”

What is different now compared to when you started Formula E a year ago, and what are your goals for the second season?

“Our rookie season was a rollercoaster. We simply lacked the consistency you need to be among the frontrunners at the end. But that’s pretty normal in the first year. Now we have to take the next step. Taking the experiences from our debut season, we can now focus on our track performance and on making our car faster. If we can achieve this, we’ll also achieve our goals: We want to win races and be world champions.”

You started your first Formula E season with with second place in Diriyah. What’s the big challenge for you this time?

“Formula E is a really difficult championship. To be successful, everything has to come together. You have to qualify as far up the field as possible, get through the race without any problems and have a good strategy when it comes to energy management. And you also need a well-balanced car. The big challenge for us will be to be well prepared for every eventuality so that we can respond quickly if something doesn’t go according to plan. That’s the key to success. We grew together as a team with these challenges and we’ve taken major development steps compared to last season. But now we have to implement them, especially in critical situations.”

Has this also changed the goals for the season?

“Of all the teams, we’re facing the steepest learning curve. Expect a good performance. We learned a lot during our debut season. During our test drives, as well, we saw that our engineers did a great job in developing the 99X Electric. So, yes, this has changed our objectives. In our first season, our goal was to finish on the podium, and we achieved that. Now we want to win. Obviously, this increases the pressure, but I’m sure we can handle it.”

You suddenly had a lot of free time after the cancellation of the season-opener in Santiago de Chile. How did you use it?

“That was an unexpected change of plan, but I quickly adapted to the new situation. I improved my sports programme and added other disciplines: for instance, I took up kick boxing. And I also spent time in the simulator.”

For you, the break from racing was particularly long. Are you looking forward to the start of the season?

“I can’t wait. The break was extremely long for me. My last race was almost a year ago in Marrakesh. Of course, we tested in between and made good progress, but that doesn’t replace racing. Everyone in the team is eager to use what we learned from the tests in the race. I’m hoping for a successful start to the season in Diriyah and for the rest of the season to go as planned.”

You contest your first race for in Diriyah. Is that something special for you, and what’s possible this season?

“It’s definitely something special. After all, is one of the most successful automobile manufacturers in motorsport. For me, it’s a great honour and a great motivation to be part of the Motorsport family. I’m pretty familiar with Formula E and I know what’s important in this racing series. We tested extensively to prepare for the new season and we’re well equipped for the challenges that lie ahead. We have everything it takes to win races – and that’s precisely our goal.”

“I really enjoy driving at night. The atmosphere is very special. Everything seems a lot faster. The track will be brightly lit. Still, as a driver, you have to really concentrate because you have a smaller field of vision and it’s harder to spot the reference points. At least we won’t be blinded by the sun.”

The Diriyah E-Prix is contested on a 2.494-kilometre street circuit featuring 21 corners, which runs past old fortifications and traditional houses made of clay. “It’s a real driver’s track, very demanding,” says André Lotterer, who is particularly pleased that there are not as many 90-degree bends and hairpins as there are on most other Formula E circuits. “In the first 14 corners you go only left, right, uphill, downhill, fast, slow. As a driver, you don’t have the time to check your energy use. Only after turn 14 can you look at the steering wheel.” And the main issues? “The difficulty is to set up your car so that it runs well in different situations. It’s also tricky to find a good rhythm. And the wind blows sand from the desert onto the track, which can make it very slippery.”

The first photos from Diriyah will be available on the press database on 25 February. Race reports will follow on 26 February (race 1) and 27 February (race 2). Further information about the TAG Heuer Formula E Team will be posted live on the Twitter channel @FormulaE. All relevant information about the team, the drivers and the racing series can be found in the Formula E Media Guide.

As a supplement and expansion of its classic media guide, the TAG Heuer Formula E Team now presents interesting content on ’s involvement in Formula E that offers excellent added value to the media. Initially, the focus is on the 99X Electric, with which tackles its second Formula E season in Diriyah. In a 3D animation, users can click on various details of the fully-electric racing car, such as the powertrain, brakes or steering wheel. Martin Füchtner, Technical Project Leader Formula E, shares information in explanatory videos. The media guide can be accessed via https://media.porsche.com/formula-e. The content will be regularly updated over the course of the season and expanded with additional interactive material.

With 16 partners, the TAG Heuer Formula E Team again heads into its second season with an extraordinary partner portfolio. Eight are represented on the 99X Electric as on-car partners. TAG Heuer is at the forefront as the title and timing partner. and the Swiss manufacturer of luxury watches can look back on many successful collaborations in motor racing. The simulation software specialist ANSYS is the technology partner. Vodafone joins the team as the official communications partner. In addition to its role as title sponsor of the ABB FIA Formula E World Championship, the Swiss energy and automation technology group ABB appears on the racing vehicles. With its Mobil brand, ExxonMobil was closely involved in the development of the 99X Electric as a technology partner. The fashion company Hugo Boss is the global clothing partner of Motorsport and the team’s outfitter. As a technical partner for fireproof racing overalls as well as shoes and luggage, the squad is equipped by the sports lifestyle company Puma. The tyre manufacturer Michelin, a long-standing partner of Motorsport, is also involved in Formula E. Other partners of the TAG Heuer Formula E Team are TRILUX (lights), C. A. VELTINS (brewery), Humbel Gear Technology (gear technology), Kärcher (cleaning technology), Hazet (tool supplier), Red Bull (energy drinks), Stilo (helmets) and SACRED Coffee (coffee and tea).

Campaigning the 99X Electric, returned to open-wheel single-seater racing after more than 30 years and celebrated a successful debut scoring second place at the season-opener in Saudi Arabia’s Diriyah. The fully-electric racing car sporting the Weissach-developed E Performance Powertrain also serves as a development platform for the sports car manufacturer’s fully-electric production models. Hence, the 800-Volt technology which utilises in Formula E is also found in the as the first fully-electric production sports car from . Energy management and efficiency are important factors of success in Formula E and in the development of production cars. The 99X Electric has a maximum output of 250 kW (340 PS) in qualification mode and 200 kW (270 PS) in normal race mode. Attack Mode boosts the output to 235 kW (320 PS), with Fanboost increasing the performance to 250 kW (340 PS). Maximum recuperation is 250 kW; the usable battery capacity is 52 Kilowatt hours.

Formula E is the world’s first fully-electric road racing series bringing thrilling motorsport to people living in major cities. As an accelerator for innovative and sustainable technologies of mobility, it promotes the worldwide acceptance of electric vehicles with the aim to counteract climate change. The format is compact: practice, qualifying and race all take place on one day. Each race is contested over 45 minutes plus one lap. Formula E, which features a team and driver world championship for the first time this year, has attracted more automobile manufacturers than any other racing series. This makes for interesting and hotly contested races. The TAG Heuer Formula E Team tackles its second season running the 99X Electric in 2021.

Eight races make up the provisional calendar of the ABB FIA Formula E World Championship for the first half of 2021.