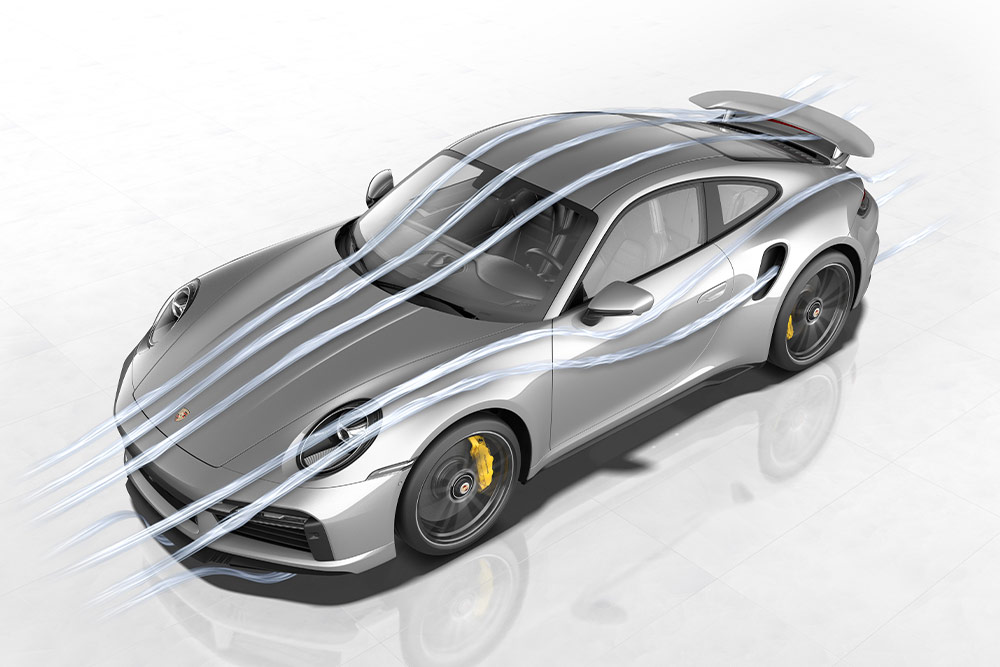 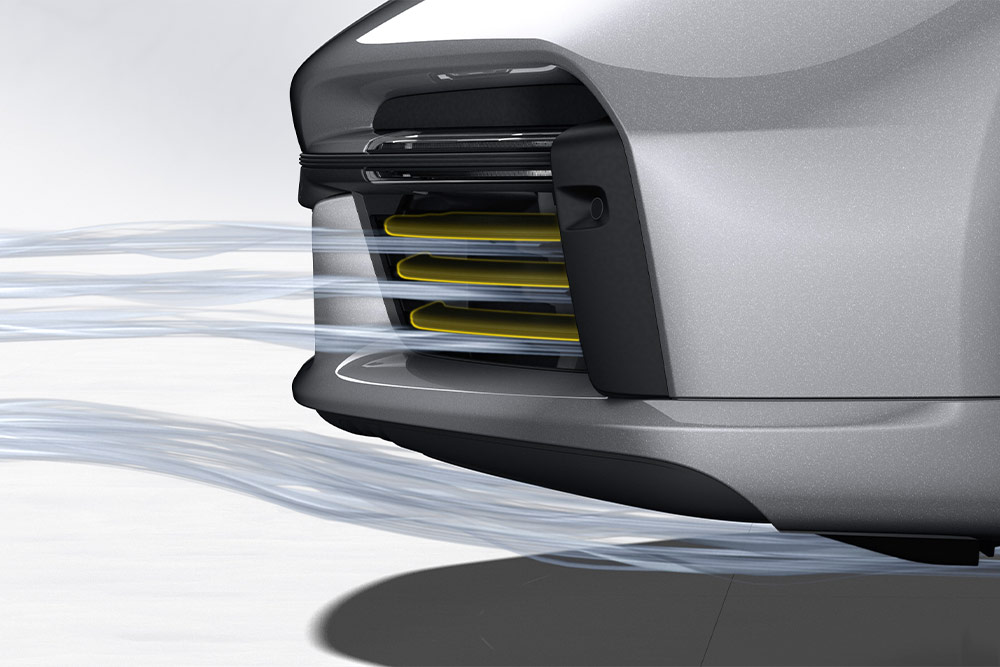 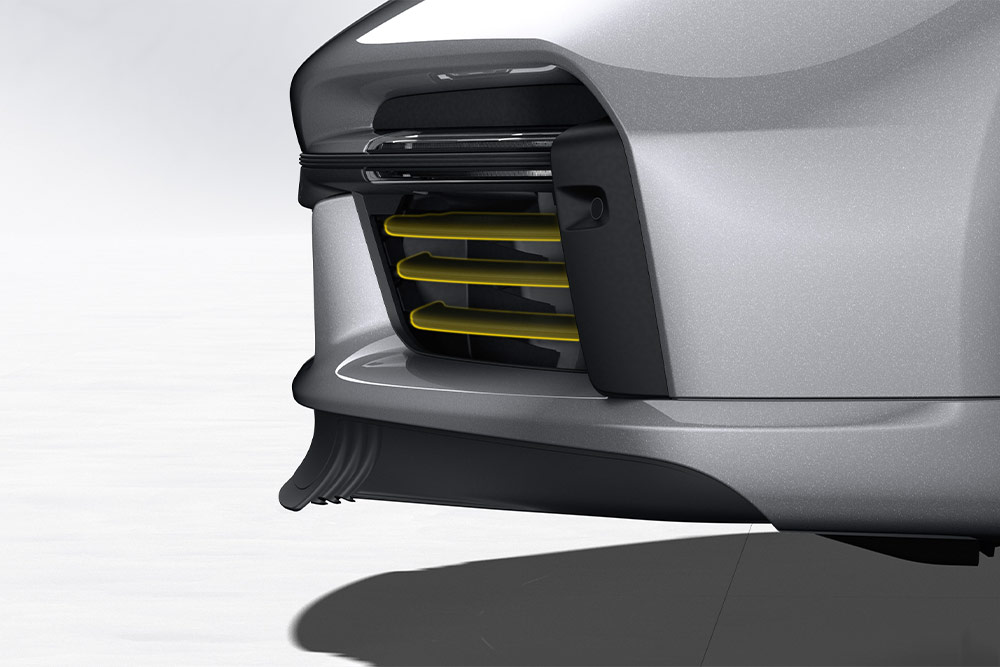 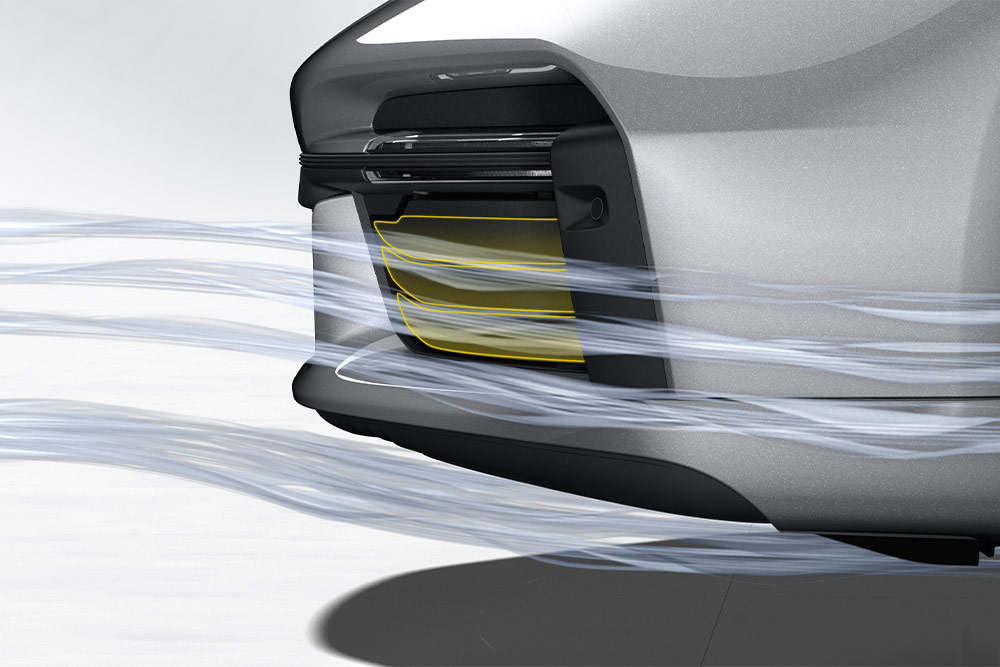 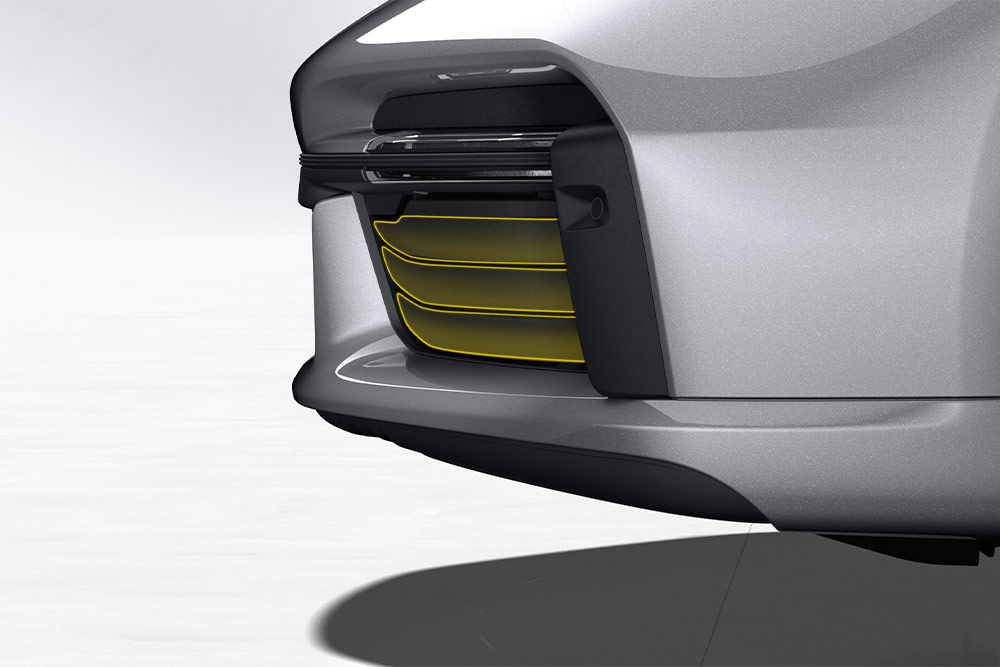 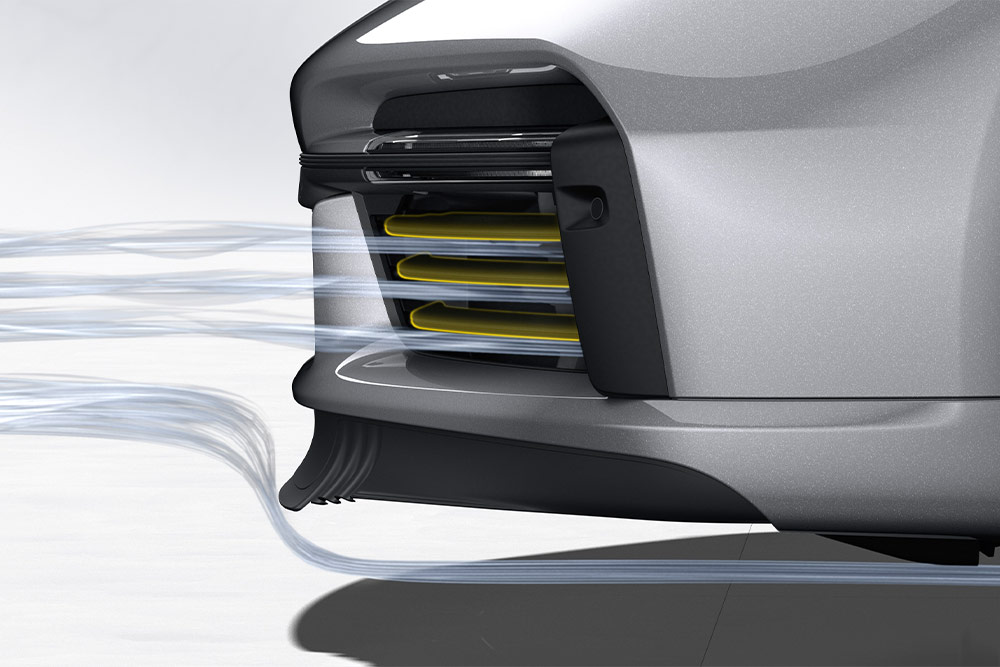 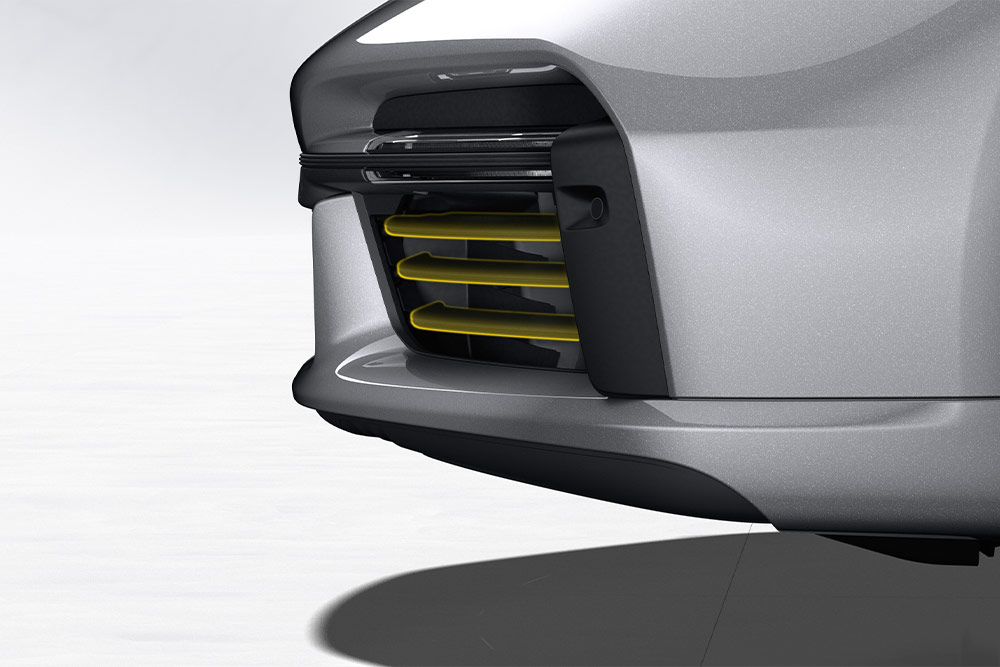 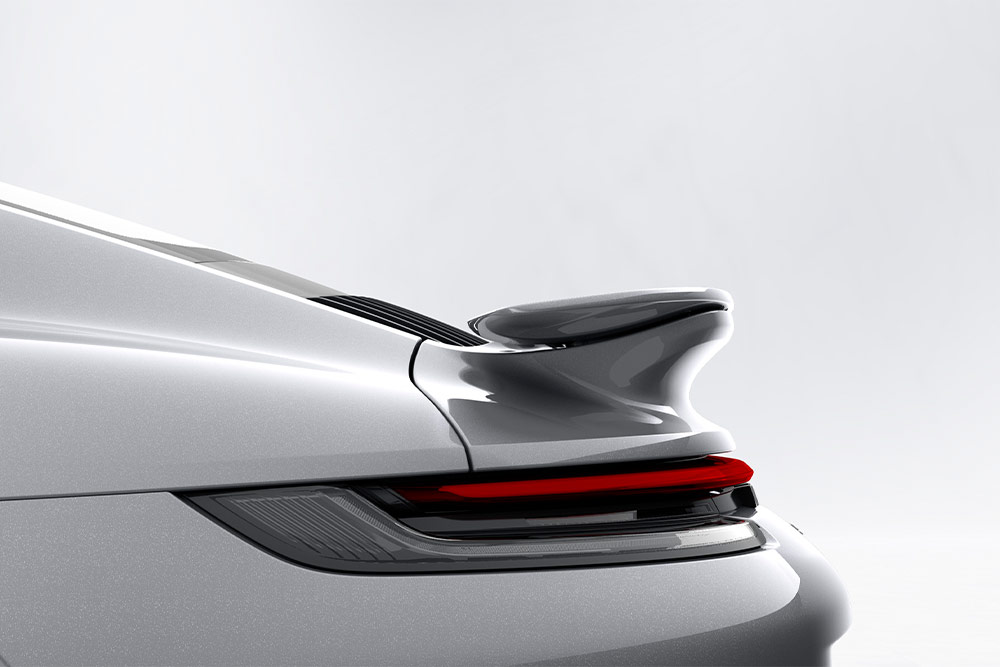 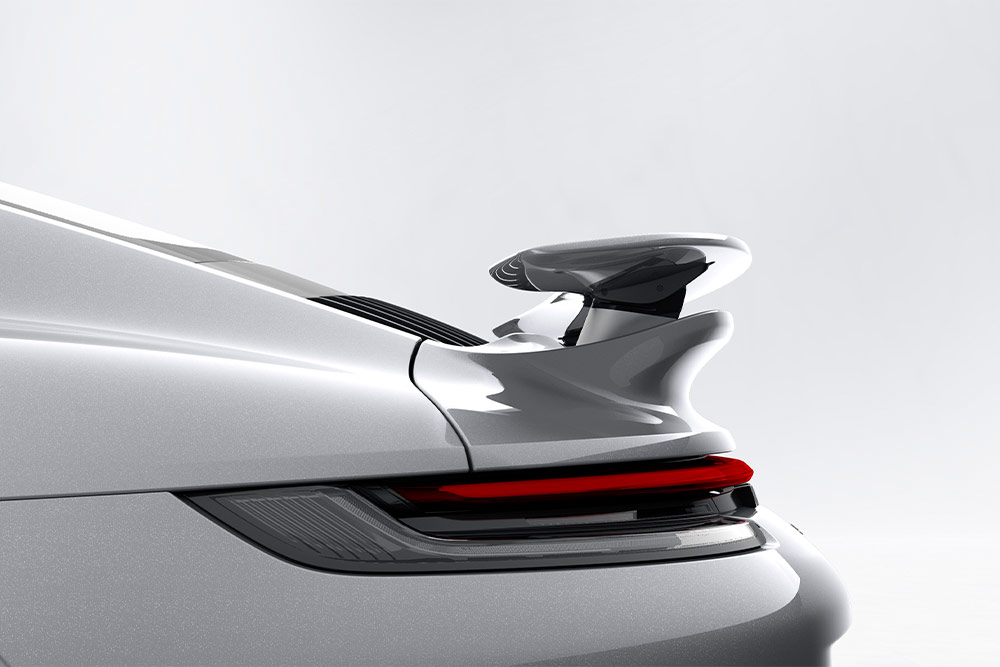 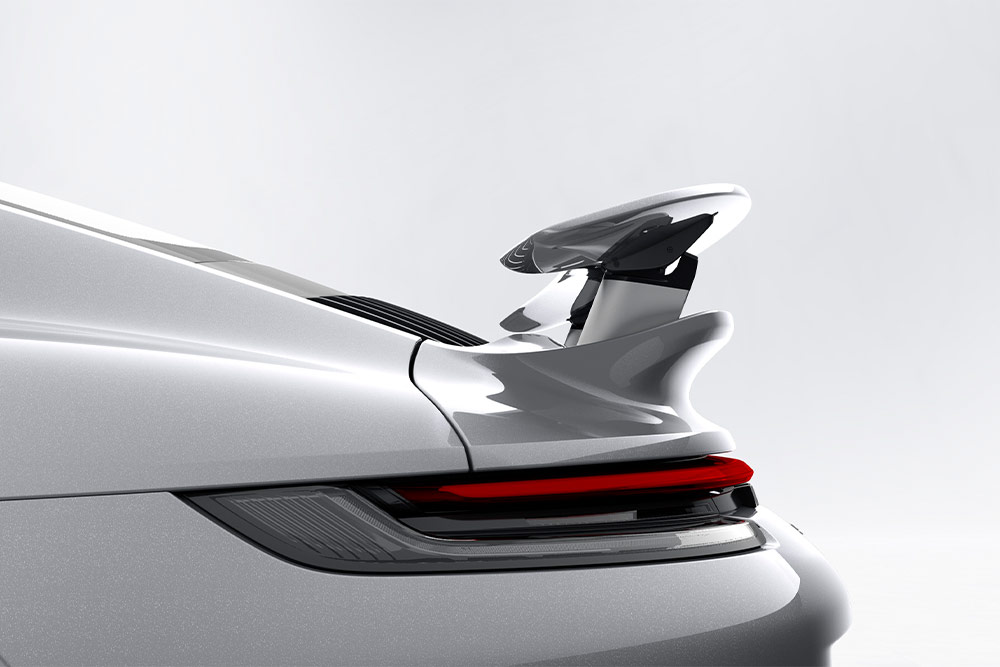 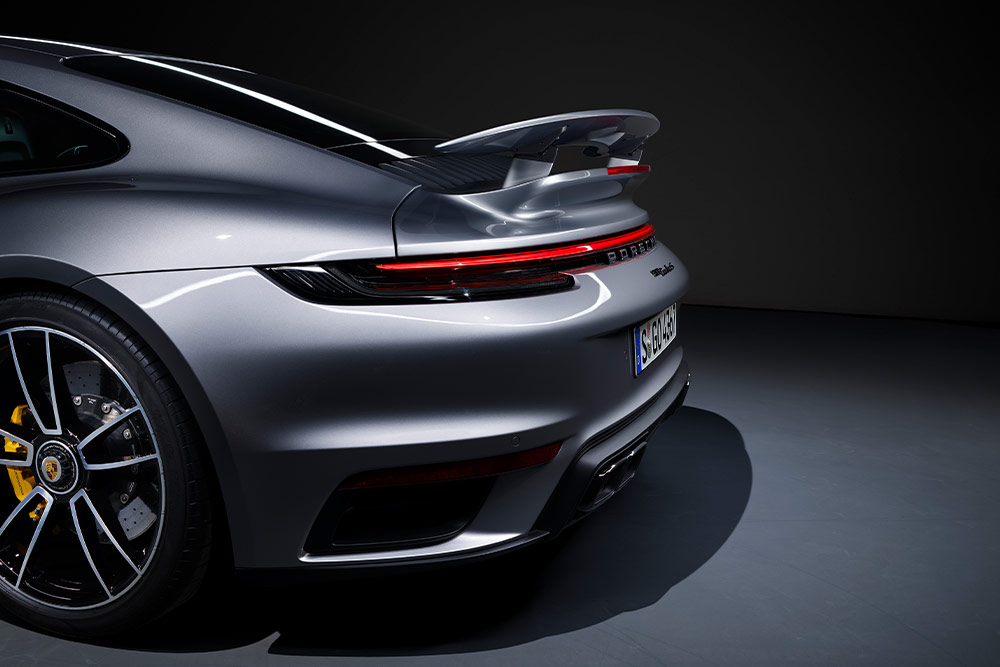 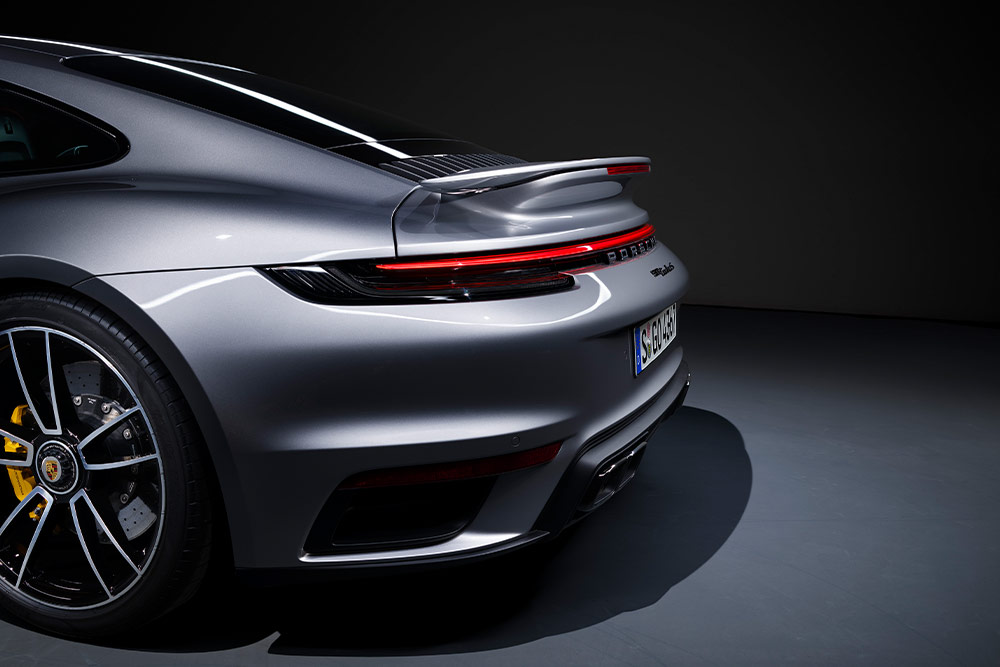 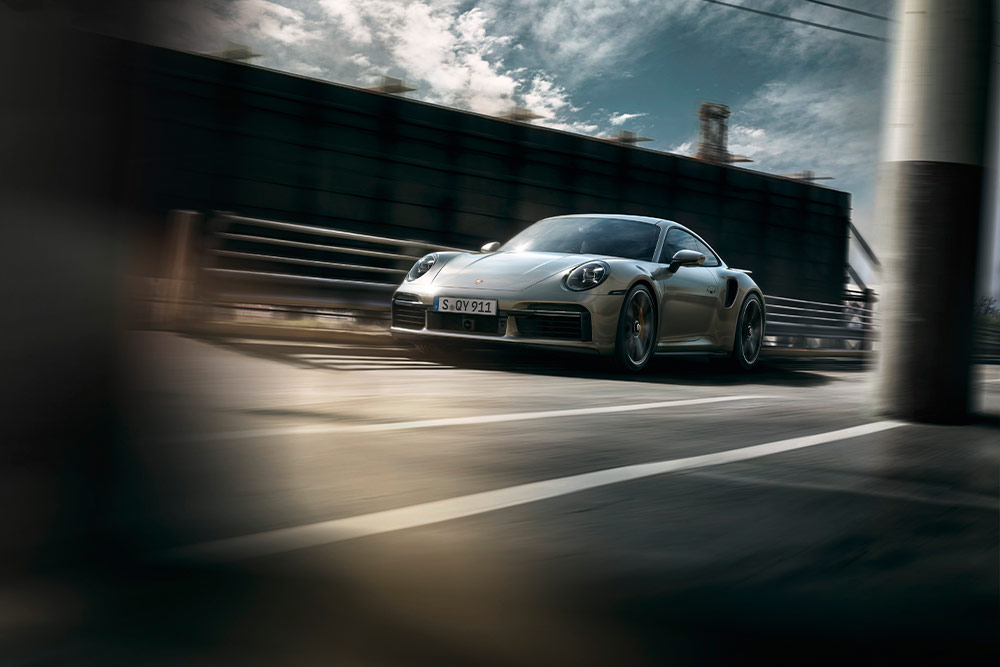 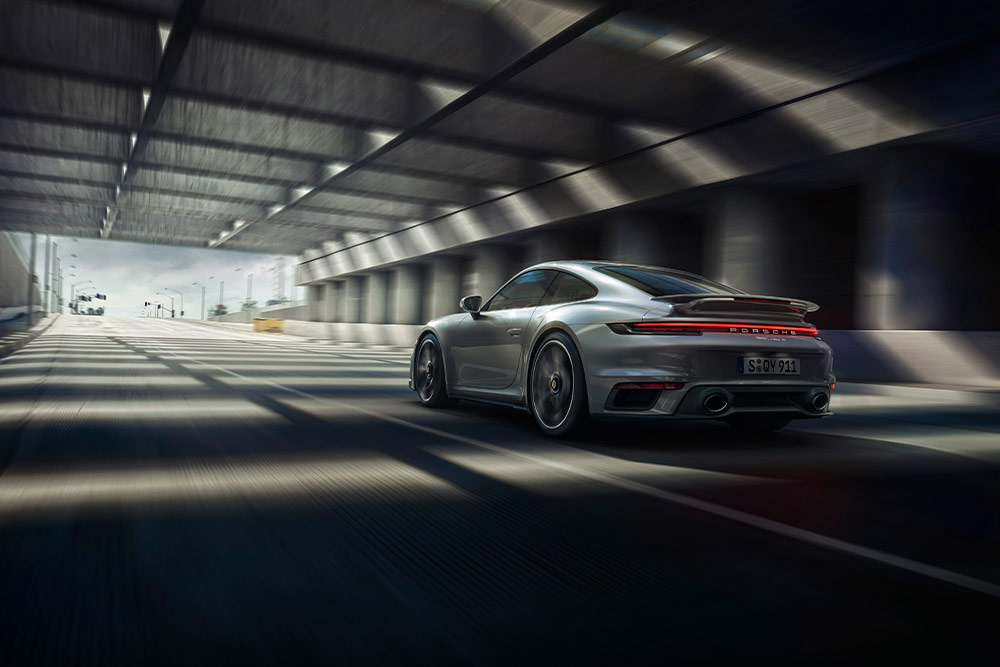 Shanghai/Stuttgart. More powerful, dynamic and comfortable than ever before: the new 911 S sets new standards in many areas. That is also true for the adaptive aerodynamics, which has further enhanced in its flagship 911. Active Aerodynamics (PAA) adapts the aerodynamic characteristics of the vehicle even more precisely to the driving situation, speed and selected driving mode. PAA cele-brated its world premiere in the previous generation of the 911 launched in 2014. All model lines from the 718 through to the and now fea-ture active aerodynamic elements.

“No other sports car reacts to different situations with such aerodynamic flexibility as the new 911 S. We aerodynamic engineers are normally faced with a dilemma: a low drag coefficient is desirable for maximum speed and low consumption, while a high downforce is advantageous for driving dynamics. However, the two characteristics contradict each other,” explains Dr Thomas Wiegand, Head of Aerodynamics Development at . “PAA resolves the conflicts between these different aerodynamic goals. The comprehensive expansion of the intelligent system in the 911 S makes it possible to achieve a much larger spread between the aerodynamic configurations for optimum driving dynamics and minimum drag. What is more, there is increased potential for the aerodynamic components to support specific driving dynamics demands in every driving situation.”

The active cooling air flaps are new. Together with the variable front spoiler lip as well as the extending and tilting rear wing, the new top-of-the-range model therefore features three active aerodynamic components. On top of the basic aerodynamic configurations of the 911 , namely PAA Speed and PAA Performance, this now permits realisation of an Eco configuration.

PAA has also been extended to include a Wet Mode function, which moves the aerodynamic balance towards the rear axle for greater driving stability in wet road conditions, as well as the airbrake function, which produces higher drag and greater downforce in the event of full braking at high speed and therefore results in a shorter braking distance and greater driving stability. PAA is also used for adaptation to the changed air flow around the vehicle when the sliding roof or convertible top is open. This means that there are a total of eight different aerodynamic configurations, which are each described by a specific combination of the active aerodynamic components.

Improvements have not just been made in adaptation to the specific requirements in driving operation, but also as regards the aerodynamic properties themselves: the newly designed active front spoiler and rear wing have increased the downforce by 15 percent to guarantee enhanced driving stability and dynamics at higher speeds. The maximum downforce in the Performance position (Sport Plus mode activated) is now around 170 kg.

The drag coefficient (cd) of the 911 S varies depending on the aerodynamic setting. The most efficient configuration with the minimum cd value of 0.33 is achieved with closed flaps and retracted front and rear spoilers.

The newly developed controlled cooling air flaps permit a lower driving resistance and thus reduced fuel consumption. The flaps are located in the right and left air intakes of the front apron. They are continuously adjustable and control the cooling air throughput through the radiators.

An intelligent energy management system is responsible for achieving a balance between the current cooling requirement, the electric power required to operate the radiator fan and the aerodynamic benefit of the cooling air flaps. As a result, the cooling air flaps are closed as far as possible from a driving speed of 70 km/h. This achieves a consumption benefit in daily driving operation.

As from a speed of 150 km/h, the flaps open linearly to achieve the optimum aerodynamic balance at high speed. Priority is also given to driving dynamics and the cooling air flaps are thus opened when the Sport, Sport Plus and Wet driving modes are active and when Stability Management (PSM) is deactivated or the spoiler button pressed.

The active front spoiler of the 911 has been significantly enhanced. The effective aerodynamic area has been increased compared with the predecessor. Extension and retraction can now take place in a shorter time with lower pressure. Three segments can be inflated separately with the help of actuators. The two outer actuators always function synchronously. The front spoiler is made of a flexible plastic (elastomer) and can therefore be rotated so that the middle segment can be retract-ed or extended when the outer segments are extended. There are several adjustment possibilities:
• In the basic position, the spoiler lip is completely retracted and is fixed in position by the preload of the elastomer and by magnets on the underbody of the 911 S.
• In Speed position, only the two outer areas of the lip are extended. More air is therefore routed around the body and the lift at the front axle is reduced.
• In Performance position, all three segments of the lip are extended. This position offers performance-oriented aerodynamics with maximum possible downforce on the front axle. In this position, the embossed “911 turbo S” logo is also visible in the middle of the spoiler lip.

The control unit and air compressor are installed at the side of the luggage compartment. The pneumatic module is more compact than on the predecessor. The luggage compartment therefore has three litres more capacity. The variable front spoiler lip also increases the front overhang angle and contributes to everyday usability: the ground clearance is higher in the basic position, and is therefore suitable for parking manoeuvres or driving over speed bumps (sleeping policemen).

The rear wing: now with even more functions

Lightweight construction is used on the rear wing: the distinctive feature weighs 440 grams less than the corresponding component of the predecessor, but has an eight percent larger effective area. The basis of the wing is a foam core with forged inserts. The structure consists of an upper side with two layers of carbon-fibre reinforced plastic (biaxial CFRP fabric) and a lower side with one layer of glass-fibre reinforced plastic (triaxial GFRP fabric). Electric adjustment of the wing – which can be extended and tilted – is performed primarily depending on the speed and select-ed driving mode.

Depending on the driving modes, there are now additional positions as well as the familiar Speed and Performance positions:
• The Eco position with retracted wing is now available over a large speed range so that the vehicle can be driven with minimum drag.
• The Performance II position with reduced angle of attack for speeds above 260 km/h reduces drag and decreases the load on the tyres on the rear axle: this made it possible to avoid increasing the tyre pressure. The advantage of these measures is high tyre potential in terms of longitudinal and lateral dynamics for driving performance and particularly sporty vehicle operation, such as on race tracks. Everyday usability and driving comfort also benefit from the adapted tyre pressure.
• In the second new wing position Wet, the wing is well-extended but is not yet tilted. In combination with the completely retracted front spoiler lip, the aerodynamic balance is shifted towards the rear axle when Wet mode is activated. The result is higher rear-end and driving stability, ensuring greater safety on wet road surfaces.

With the new Wet mode, the focus is on driving stability in wet conditions. If the sensors equipped as standard in the front wheel housings detect a significantly wet road surface due to spray that is swirled up, a corresponding message is displayed to the driver in the instrument cluster. The driver can then manually activate Wet mode by means of a rotary switch on the steering wheel. In addition to the above-described adaptation of the aerodynamic components, all relevant control systems are also set to maximum driving stability.

The new airbrake function is activated automatically in the event of full braking at high speeds. The front spoiler and rear wing are then moved to the Performance position. The higher drag and increased downforce can reduce the braking distance. Driving stability is also improved during braking.

Configurations at a glance:

The PAA control strategy with spoiler button is the same as in Sport Plus mode.

In addition to the basic positions explained above, the PAA also reacts to opening of the sliding roof or convertible top. A distinction is therefore made between seven rear wing positions. Different equipment variants are also taken into account in the configurations for the individual positions. The control strategy also allows for whether the car is a or Cabriolet and whether a Sport Design package with different body contours is installed at the front and rear.