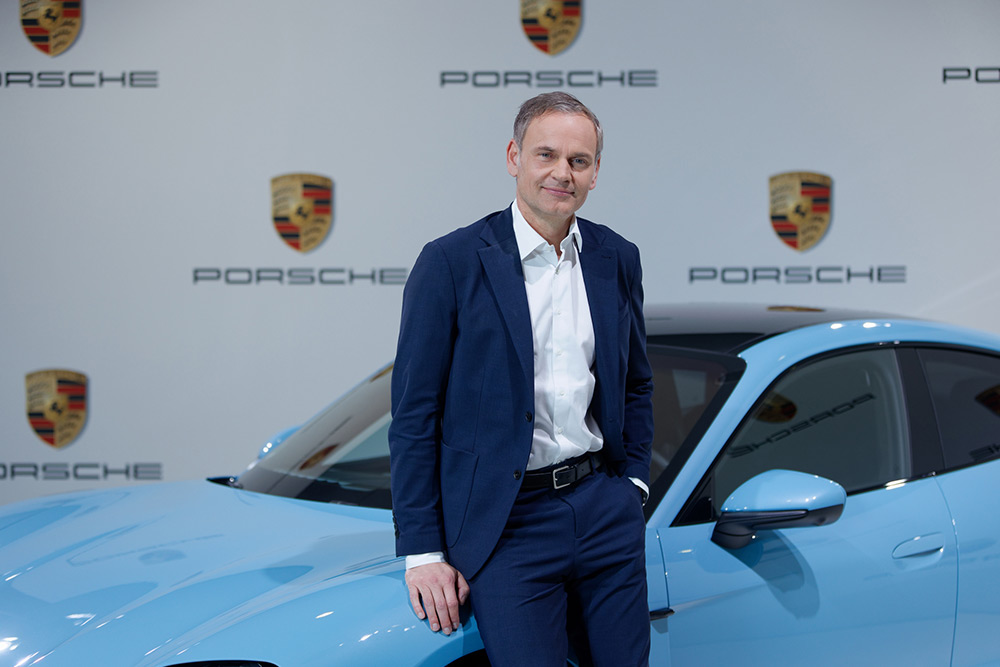 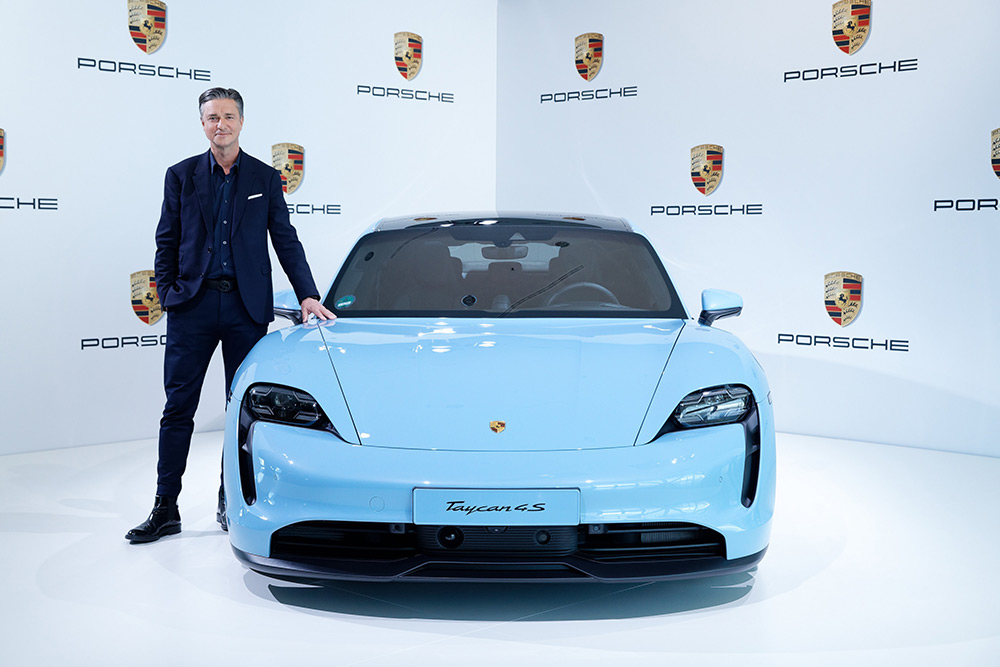 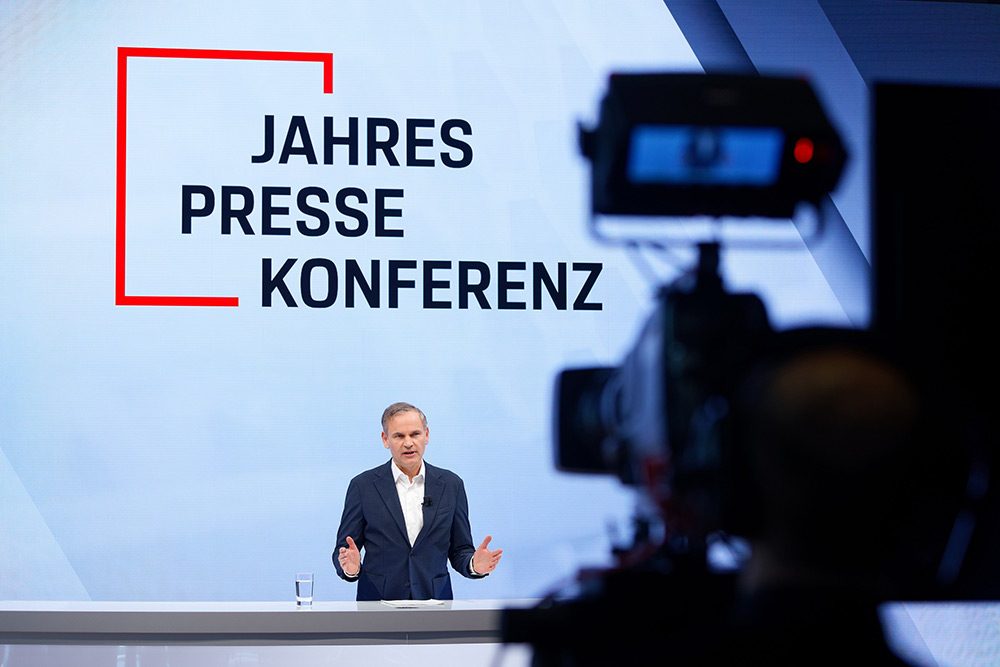 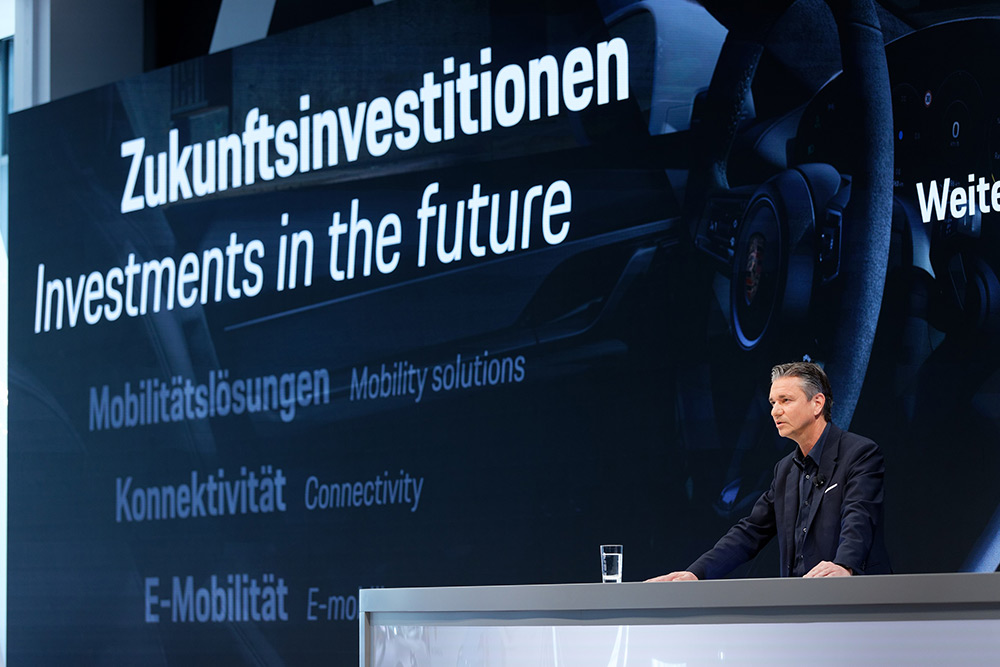 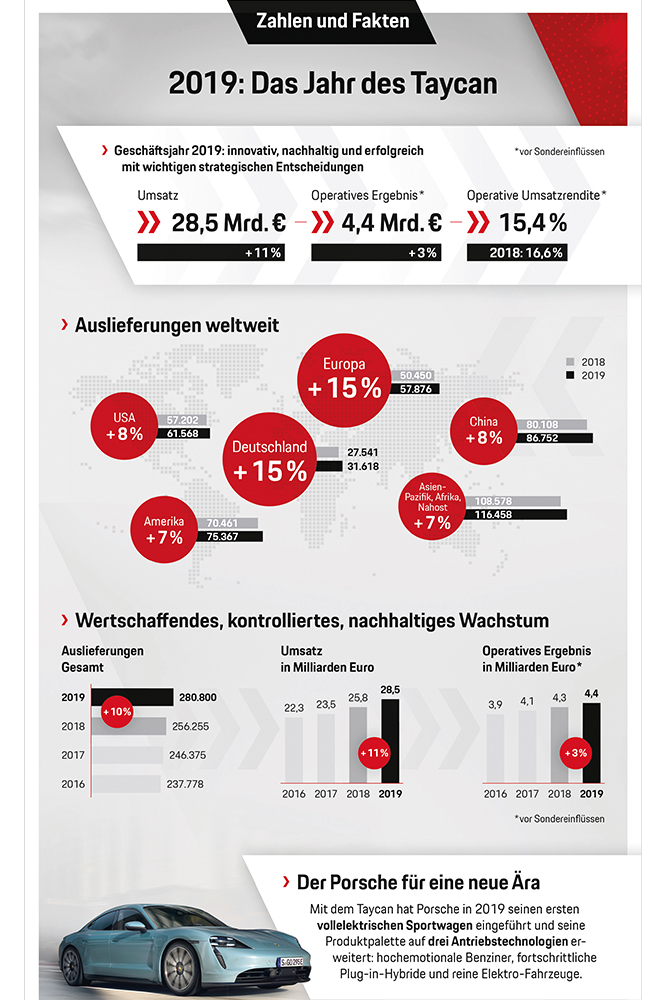 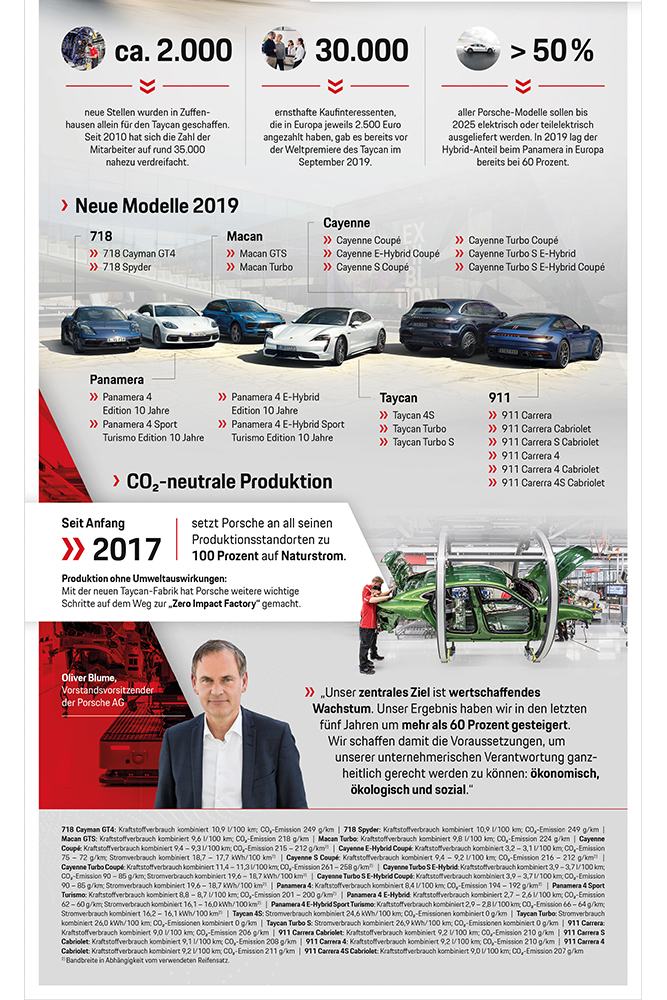 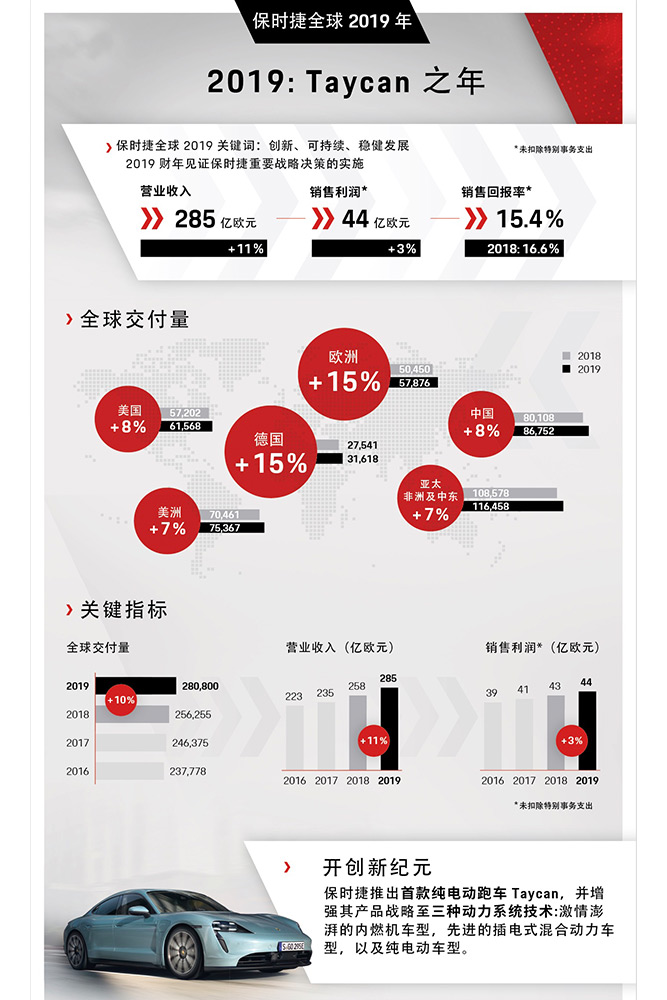 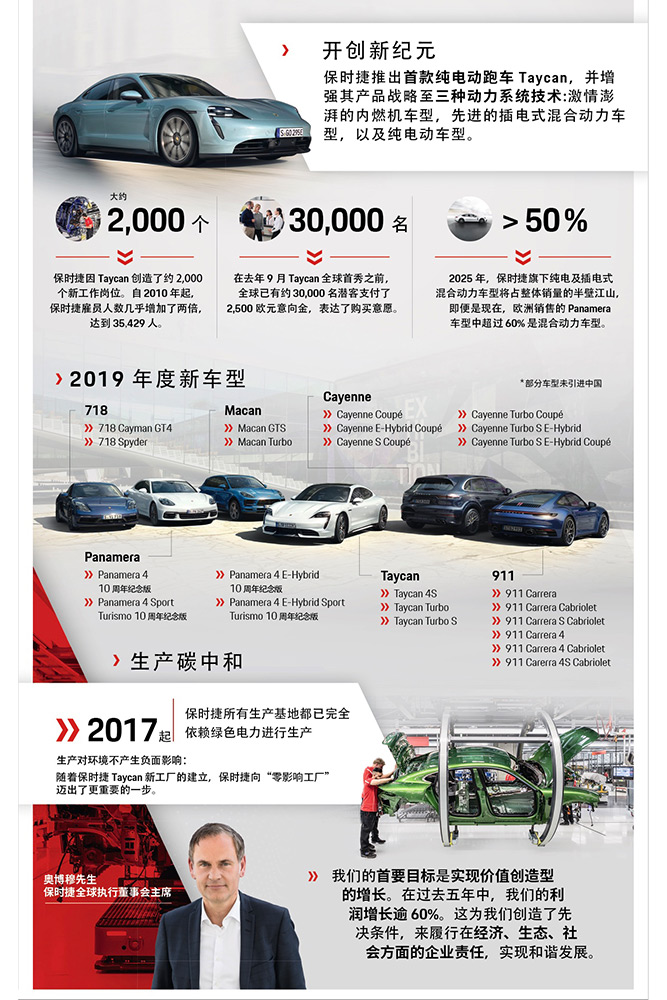 “As a pioneer for sustainable mobility has implemented important measures in recent years. 2019 saw the introduction of many emotive new products. Among other things, we launched the , our first all-electric sports car,” says Oliver Blume, Chairman of the Board of AG. “Thanks to our attractive product range, consisting of efficient petrol-driven cars, high-performance plug-in hybrids and now also purely electric sports cars, our deliveries once again increased in the 2019 financial year.” However, the success of the past year is far more than just a snapshot according to Blume: “Our primary goal is value-creating growth. We have increased our result by more than 60 percent over the past five years. This allows us to create the prerequisites to fully meet our entrepreneurial responsibilities in economic, ecological and social areas.”

“In 2019 we achieved new record values in terms of sales revenue and profits before special items. The increase in profits is due particularly to the strong increase in volumes as well as the positive development of our other business fields and divisions. At the same time, higher fixed costs, caused by our growth, significant investments in electrification and digitalisation, and currency effects had a negative impact on the result,” says Lutz Meschke, Deputy Chairman of the Board and Member of the Board for Finance and IT at AG. “We nevertheless again exceeded our strategic targets with a return on sales of 15.4 percent before special items and a return on investment of 21.2 percent.”

Strongest growth in Germany and Europe

The and models series in particular were responsible for a significant increase in deliveries: 92,055 vehicles and thus 29 percent more than in the previous year were handed over to customers. A total of 99,944 vehicles were delivered to customers – amounting to an increase of 16 percent compared with 2018. On the company's home market and in the entire European market, generated the strongest growth in 2019 with a plus of 15 percent in each case. 31,618 vehicles were delivered in Germany and 88,975 vehicles in total throughout Europe. The sports car manufacturer also recorded an increase in the USA, one of its largest markets. In the USA, grew the figure for its delivered vehicles by eight percent to 61,568 vehicles. Consequently, the sports car manufacturer was able to defy the overall weakening economic situation in the US market.

In 2019, China delivered 86,752 new vehicles to customers, increasing 8% compared with 2018 and accounting for a total of 31% of AG worldwide sales. As a result, China remained the largest single market of AG for the fifth consecutive year. In addition, China also attained significant growth in terms of financial services, pre-owned cars and optional load business. The steady growth of China in 2019 was driven by a variety of factors, including the evolving and innovative product lineup, the diversified sales network, as well as the authentic brand experience.

In 2019, China relocated its headquarters to Lujiazui, the financial hub of Shanghai, one of 2019’s landmark events for marking the grand opening of a new chapter in China. This new headquarters is the fourth head office of China since it entered the country 19 years ago. With achieving significant economic growth, China also actively carried out its corporate social responsibilities in China. In 2019, the “Empowering the Future” corporate social responsibilities of China were refined continuously across three major CSR sectors: the China Dealer CSR Fund, ’s young Chinese artist cultivation programmes and the cooperation with Tongji University, with all programmes being further expanded last year.

Electromobility is a job creator at : around 2,000 new jobs were created for the and the company launched a comprehensive qualification campaign. Production of the electric sports car at the parent plant in Zuffenhausen is carbon-neutral. Since the beginning of 2020 has converted the site’s entire energy supply to carbon-neutral sources: new buildings are energy-efficient and the electricity is from renewable sources. The company generates heat in its own CHP plants, which are operated with biogas produced from residual materials and waste.

By 2024, the sports car manufacturer will invest around €10 billion in the hybridisation, electrification and digitalisation of its cars, and is consistently enhancing its offering in the area of electromobility: the next model to be launched will be the first derivative, the Cross . The new generation of the compact SUV will also be electrically powered, and it will thus be ’s second, fully battery-powered model series. The company is anticipating that by the middle of this decade already half of the entire product range will be sold as fully electric models or partially electric plug-in hybrids.

“We had already received around 30,000 serious purchase enquiries for the before our world premiere in September,” says Blume. “More than 15,000 customers have now signed their purchase contract. We are confident that we will also be able to generate a high demand in 2020 as a result of the attractiveness of the and our 911, 718 and derivatives.”

“Over the coming months we are facing an economically and politically challenging environment, not least in light of the uncertainty relating to the coronavirus,” says CFO Meschke. Despite very high investment in the electrification of the product range, digitalisation, and the expansion and renewal of company sites, the company aims to continue to meet its high earnings target, adds Meschke. “With measures that will boost efficiency and by developing new, profitable business fields, we aim to continue to achieve our strategic goal of a return on sales of 15 percent,” emphasises Meschke.