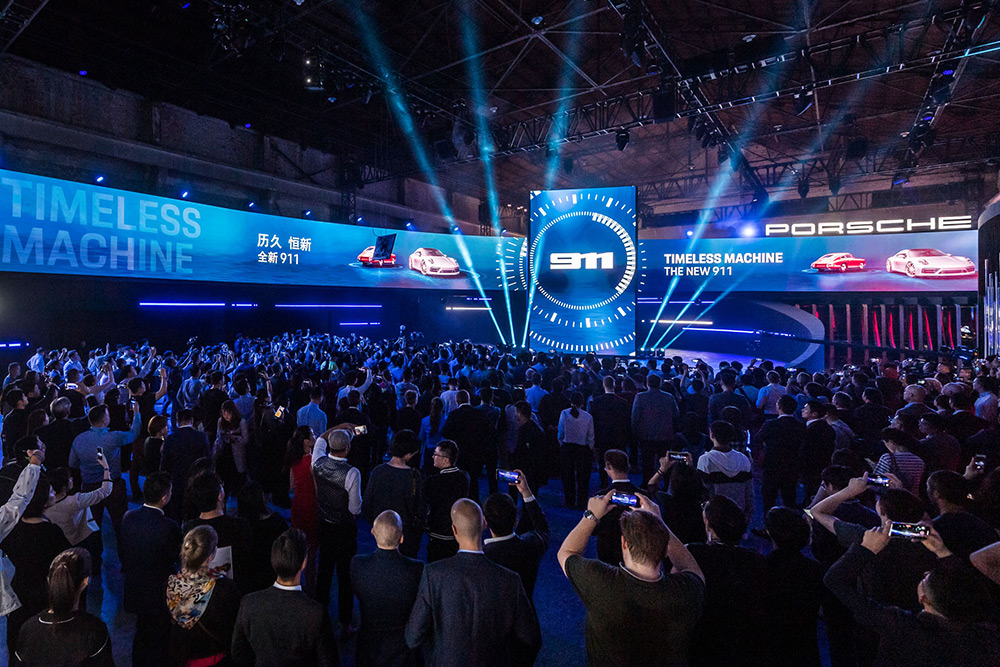 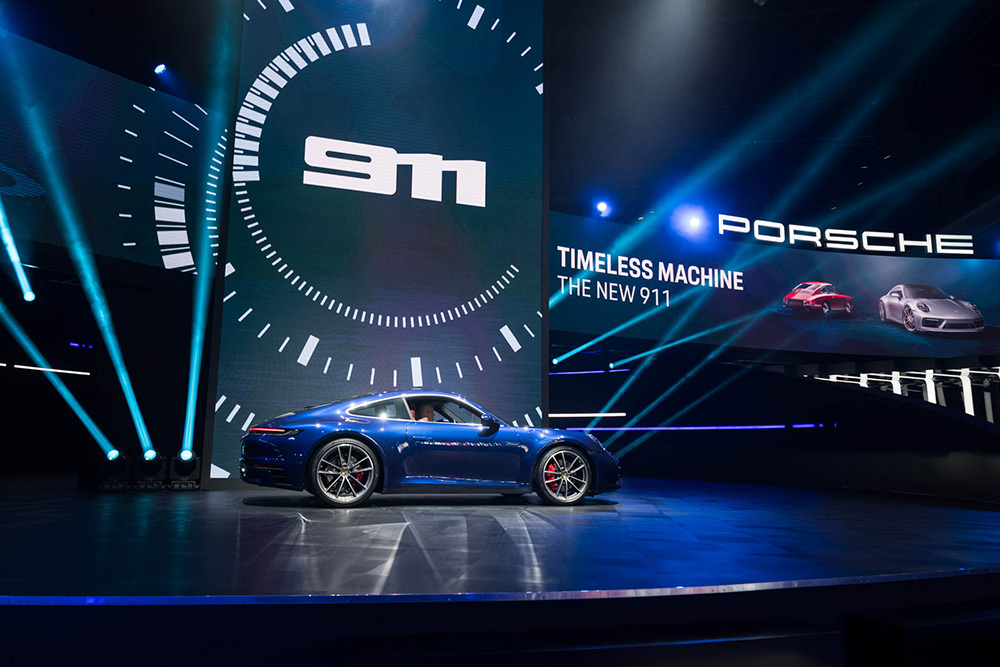 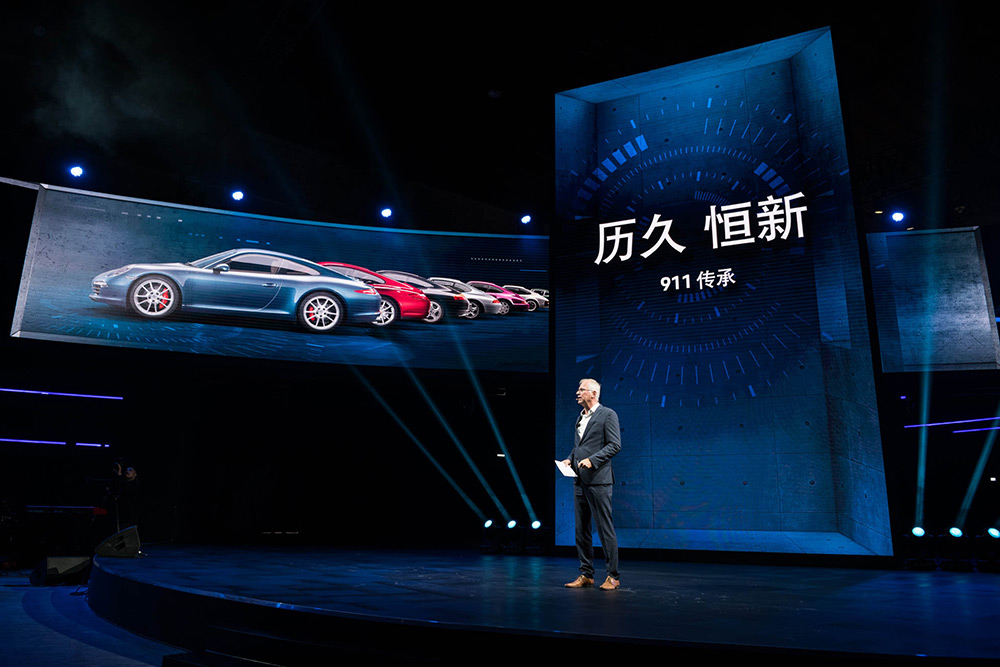 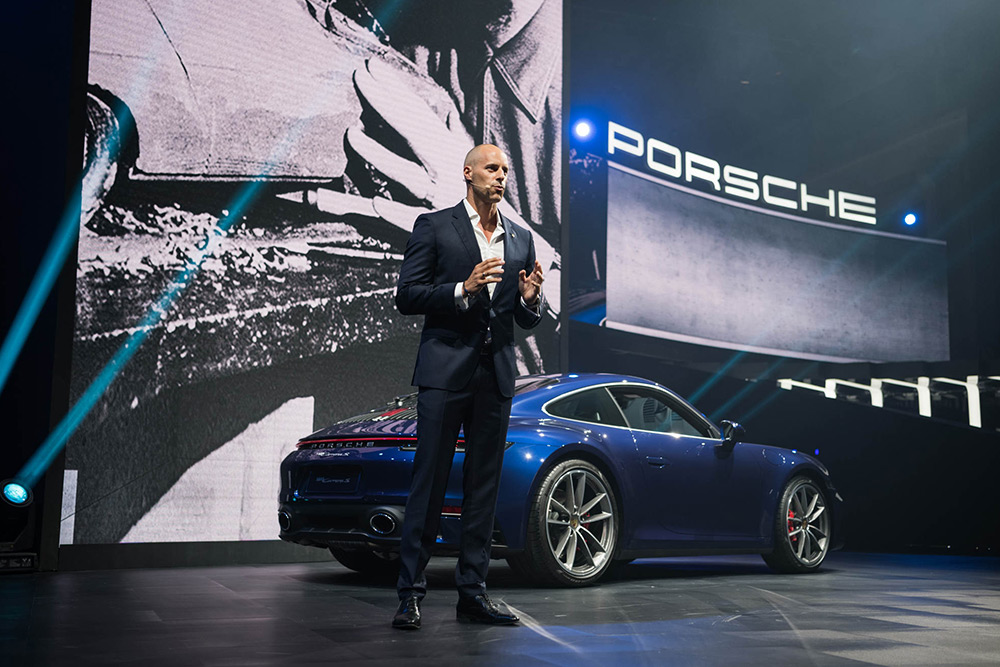 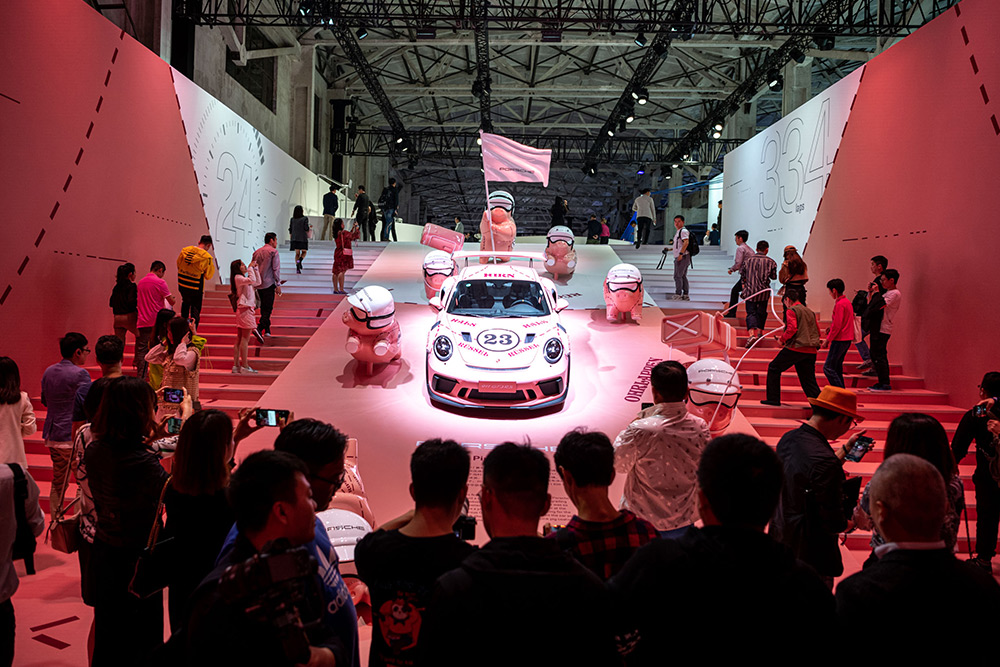 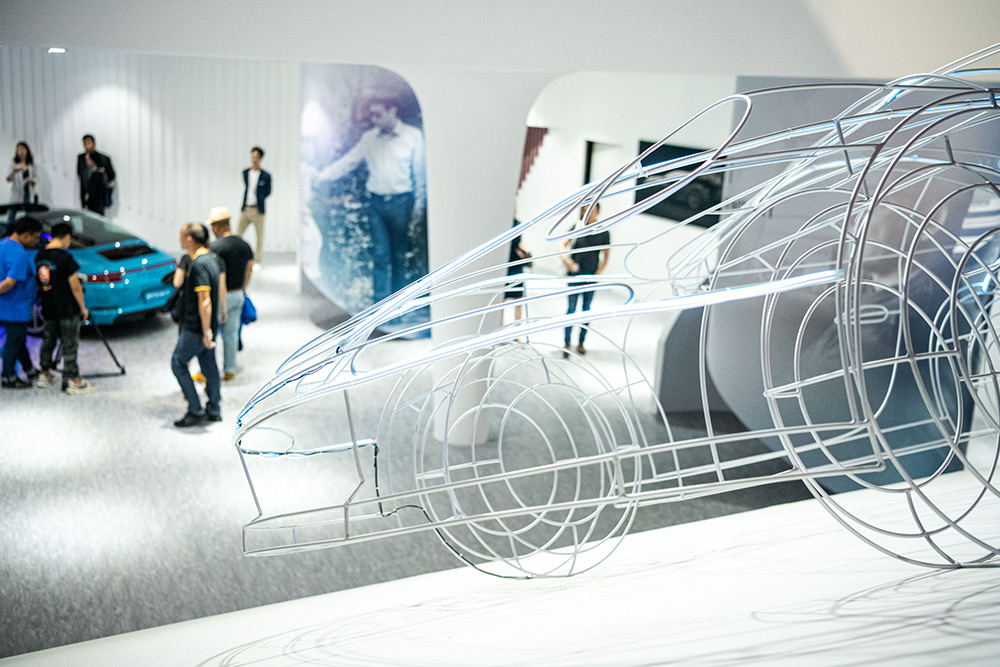 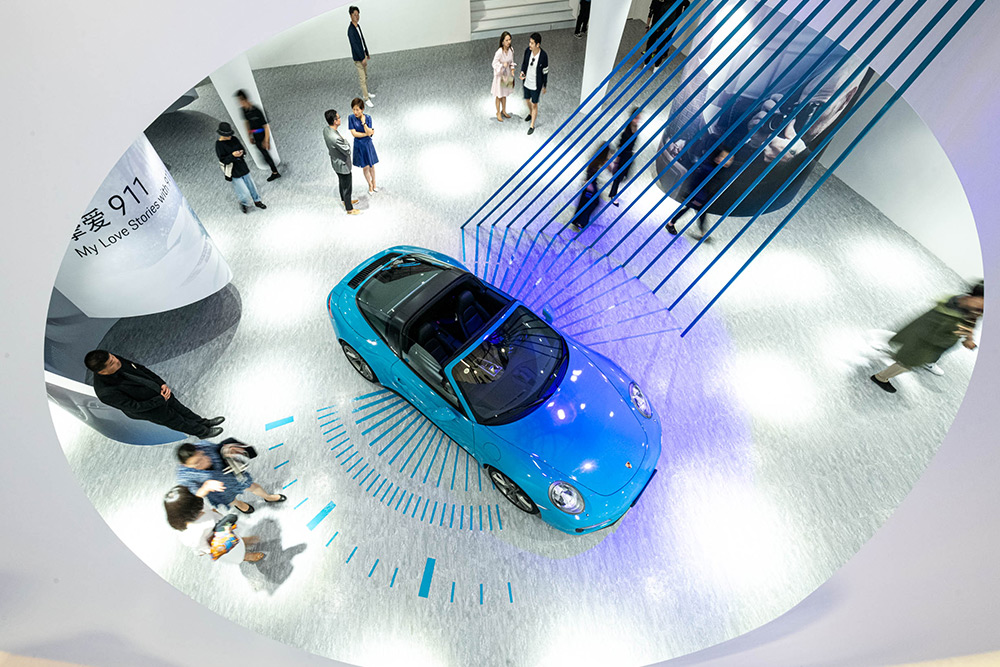 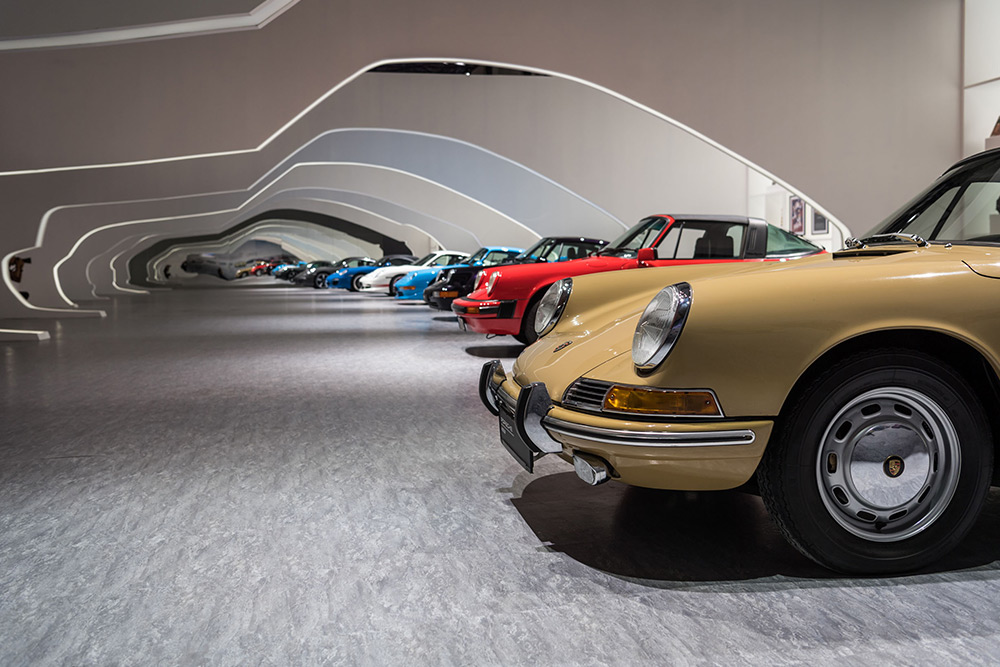 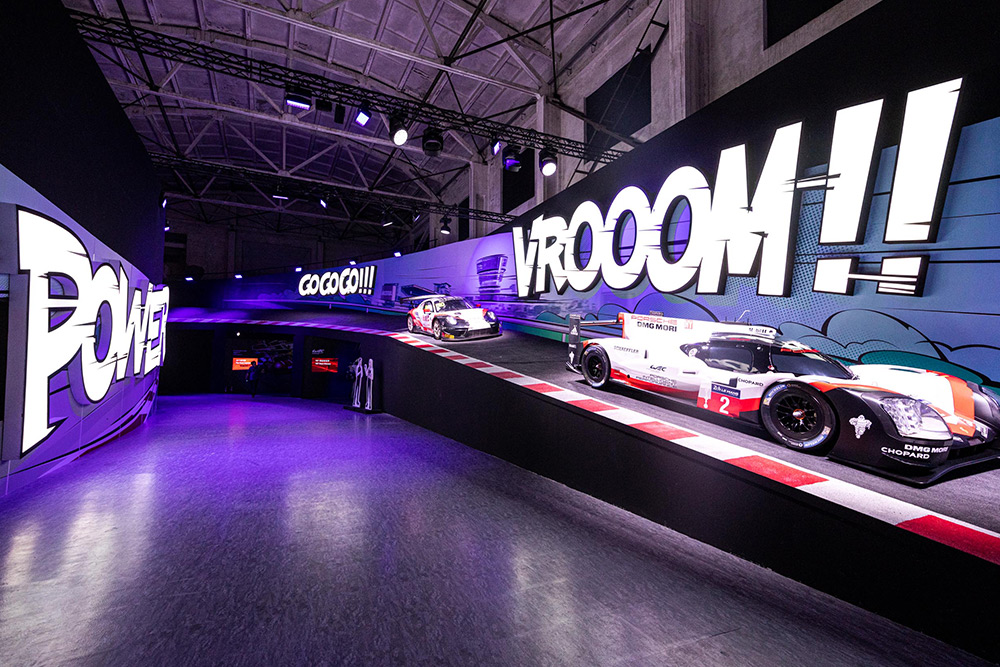 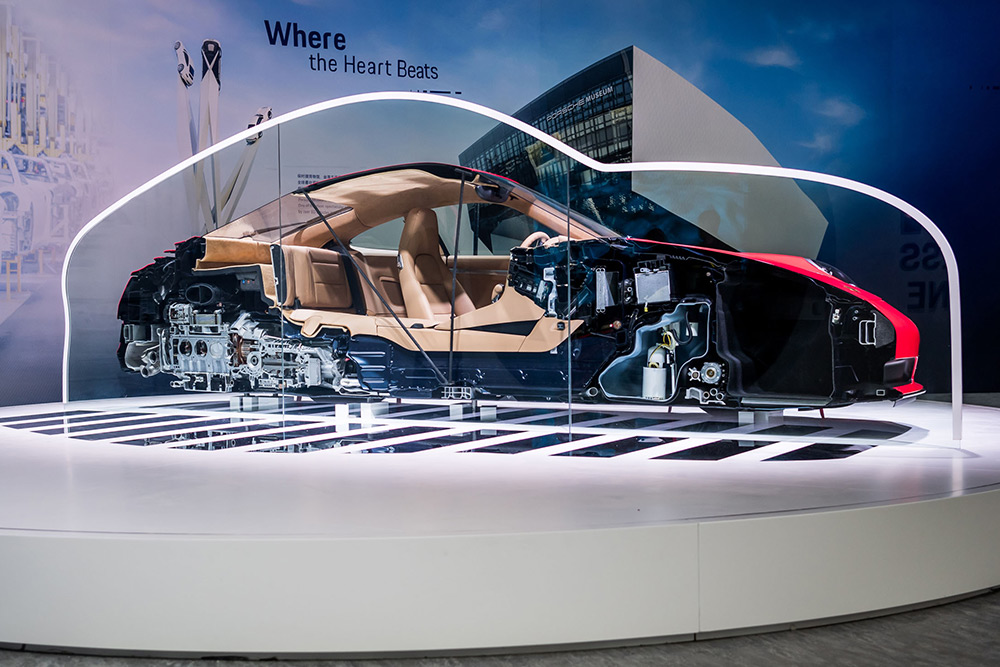 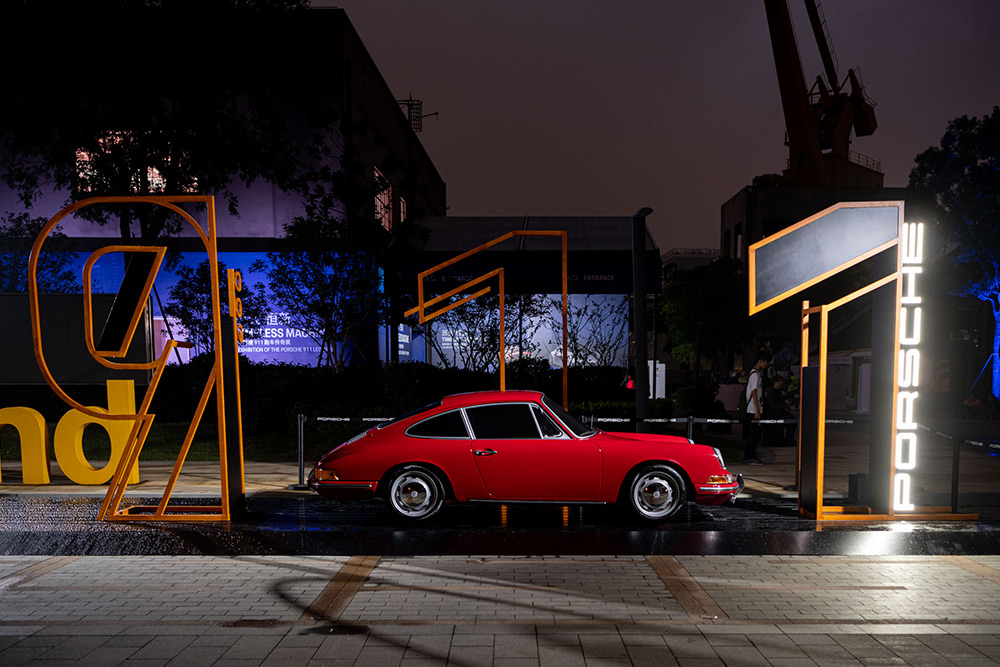 · More powerful, faster, digital - the new 911 celebrates its China launch and will be delivered to customers as of late November;
· Manufacturer suggested retail price (MSRP) of the new 911 model is RMB 1,265,000 and the new 911 S model is 1,460,000;
· Spreading the sports car culture, the Exhibition of the 911 Legends fully reveals the glorious history of the iconic model.

Shanghai. For more than half a century, the 911 has been at the core of the brand. Regardless of how trends have changed over the years, the 911 has always remained the quintessential image of what a sports car should be in the minds of motoring enthusiasts the world over. On 11 October, under the theme of “Timeless Machine”, the Exhibition of the 911 Legends premiered at East Bund, Minsheng Wharf in Shanghai Pudong New Area. At the same time, the new eighth generation 911 – following its China premiere at the Shanghai Auto Show in April, celebrated its official China launch at the vernissage night. The S models of the new 911 will be delivered to the Centres across China as of the end of November. Meanwhile, the Manufacturer Suggested Retail Price (MSRP) of the new 911 model – the latest member of the new 911 family, was announced as RMB 1,265,000.

This stunning exhibition of legendary 911 sports cars is first of its kind in China that curated around this iconic masterpiece and a truly timeless machine. The exhibition, free to the public from 12 to 20 October, guides the audience through the glorious history of the 911 on its half-century journey to the present day. The five on-site exhibition areas include “Pink Pig”, “Design Lab”, “”, “Motorsports” and “The New 911”, amply covering the sports car principles that the marque has adhered to for decades, the innate track genes, the brilliant achievements of the 911 over the past 56 years and the new 911 that is more than the sum of its predecessors.

The 911 model represents the soul of . Since the first 911 sports car rolled off the assembly line in 1963, more than 1 million have been produced, making it the world's most successful sports car. The 911 is not only a superb sports car, but also represents a weighty chapter in the history of global motoring. Dr.-Ing. Jens Puttfarcken, President and CEO of China, said: “We hope that through this exhibition, more people will have the opportunity to approach the 911 and understand the core values of . In addition, the new 911 will now be available in China, with more powerful performance and more advanced technology, it will bring more pure driving pleasure to Chinese customers.”

The extraordinary journey of the 911

The legendary journey travelled by the 911 begins with the relentless pursuit of a dream car. In the “Design Lab” section of the exhibition, a clear and vivid line is traced depicting the genesis of the 911 from an original idea to a draft on the drawing board, to a physical clay model and finally to the finished product as a roaring, galloping sports car. Here, the audience can get a deeper understanding of the important cornerstones established half a century ago to set the direction of the brand, with the 911 as the essence of , continuously breaking through itself while finding the perfect balance between inheritance and innovation. At the same time, in the context of the popular elements of various eras, the 911 is not only a car, but also an expression of a unique attitude, fully demonstrating 's design and life philosophy.

In the “” section, the first to the seventh generation of the 911 are lined up in order, displaying the timeless machine’s evolution. In 1963, the first generation the 911 – codenamed 901 – made its debut at the Frankfurt Auto Show. Thanks to its performance exceeding the expectations of almost everyone, it quickly captured the hearts and minds of motoring enthusiasts and laid the foundations for the global success of the 911. Subsequently, the second generation of the 911 – codenamed 930 – experienced rapid development with many technological innovations and spurred on the development and innovation of the 911 in the 1970s and 1980s. Next up, the third generation of the 911 – codenamed 964 – was the first to carry the four-wheel drive system from the 959 supercar, making it once again ahead of its time. As the last 911 model with an air-cooled horizontally opposed engine, the fourth generation 993 was the perfect ending for the air-cooled era with its strong athletic performance. In 1997, the fifth generation of the 911 – the 996 – launched, and for the first time, it was equipped with a water-cooled horizontally opposed engine. In the 21st century, 911 enthusiasts were blessed with even greater choice. The sixth generation 997 spawned 24 different models, with the technology becoming ever-more refined and the design continuing to be timelessly stylish. The 991 launched in 2011 becoming the best-selling model of the 911 ever, with around 220,000 units rolling off the assembly line. At this point, the 911 broke through global sales of 1 million units in the 991 era, becoming the world's most successful sports car.

The glory of the 911 originates on the racetrack

In addition to its unforgettable, classic appearance, the 911 is known for its advanced technology, and the many unique innovations that originate from the track. With the mission of pursuing superior performance, from the moment of its birth the 911 has taken the track as the crucible in which its motoring brilliance is forged, achieving jaw-dropping results time and again, becoming the “All-rounder” and “Ever-Victorious General” on the track. Of the more than 30,000 events has won so far, two-thirds of the victories are attributed to the 911.

In the “Motorsports” section, a 919 Hybrid Racing Car, which won the 24 Hours of Le Mans in three consecutive championships (2015/2016/2017), is on display. It was developed on the basis of 's 911-based hybrid racing 911 GT3 R Hybrid and completed its glory mission in the 19th Grand Prix in ’s history. At the same time, also provides customers with professional racing cars that meet FIA global standards with its strong technical excellence. Another exhibition car displayed in this area is the 911 GT3 R car designed for international GT events. This not only symbolises that the sporting spirit is the eternal soul of , but also proves that plays a pivotal role in international motorsports events and underlines the global success of one-make events.

In the exhibition, a “Pink Pig” liveried 911 serves as a particularly eye-catching centrepiece. This special painting comes from the anecdote between racing and one-time motorsport mega-sponsor Martini. In 1970, after winning the first Le Mans championship, continued to optimize the car and the new body was somewhat flatter and fatter than before, so much so that the boss of the main sponsor Martini declared it looked like a pig and refused to allow the Martini Racing livery be used on the car. Displaying their renowned dry wit, the German engineers – who were so proud of their soon-to-be classic creation – leaned in to the criticism and decorated the car in a bright pink colour with dashed lines indicating the best cuts of meat, as would be found on a butcher’s board. Due to the success of this particular model, the “Pink Pig” livery became a beloved classic. In 2018, the 911 RSR, racing with the now-famous “Pink Pig” livery was awarded the GTE Pro category in the 24 Hours of Le Mans.

The new 911 is more than the sum of its predecessors

As part of this exhibition of the 911 legends, the new 911 officially launched in China. Committed to its exclusive sportiness and the unmistakable design DNA, the new 911 adopts a more muscular look while taking on cutting-edge technology such as a 10.9-inch touch screen, further satisfying the demands of the digital world. The eighth generation has consolidated its status as a sports car icon by combining timeless heritage and creative innovation.

The new 911 is equipped with a further optimized six-cylinder horizontally opposed turbocharged engine that delivers unprecedented power. At the same time, thanks to optimized injection technology and a new layout of turbocharger and charge air cooling system, the drive efficiency of the new 911 is further enhanced. The new car is fitted with a newly developed 8-speed PDK ( Doppelkupplung) transmission. Intelligent control and chassis elements as well as innovative assistance systems masterfully combine to engage the uncompromising dynamism that the classic rear-engine sports car is famed for. Additional highlights include new assistance systems, such as the world's first Wet Mode – which makes driving on wet roads even safer – and Night Vision Assist with a thermal imaging camera, as well as comprehensive connectivity, which now also uses swarm intelligence.

The new 911, which has essentially been in development since 1963, touches every nerve of excitement with its robust daily practicality and hearty driving experience, inspiring countless unforgettable dream moments. Under the brilliance of dreams and strength, brings to people the spirit of the never-ending exploration from the track technology, igniting the desire of fans to ride the track, offering a blisteringly fast, turbo-charged engine to help them chase their dreams. The timeless sports car culture, accumulated over the years, is encapsulated in the unique charm of the 911, attracting millions of admirers over the past half-century.

At the vernissage night of the Exhibition of the 911 Legends on 11 October, more than 800 customers, enthusiasts, media friends and guests from all walks of life gathered together, reliving the exciting moments of 911 over the past half a century and celebrating the national launch of the new 911.