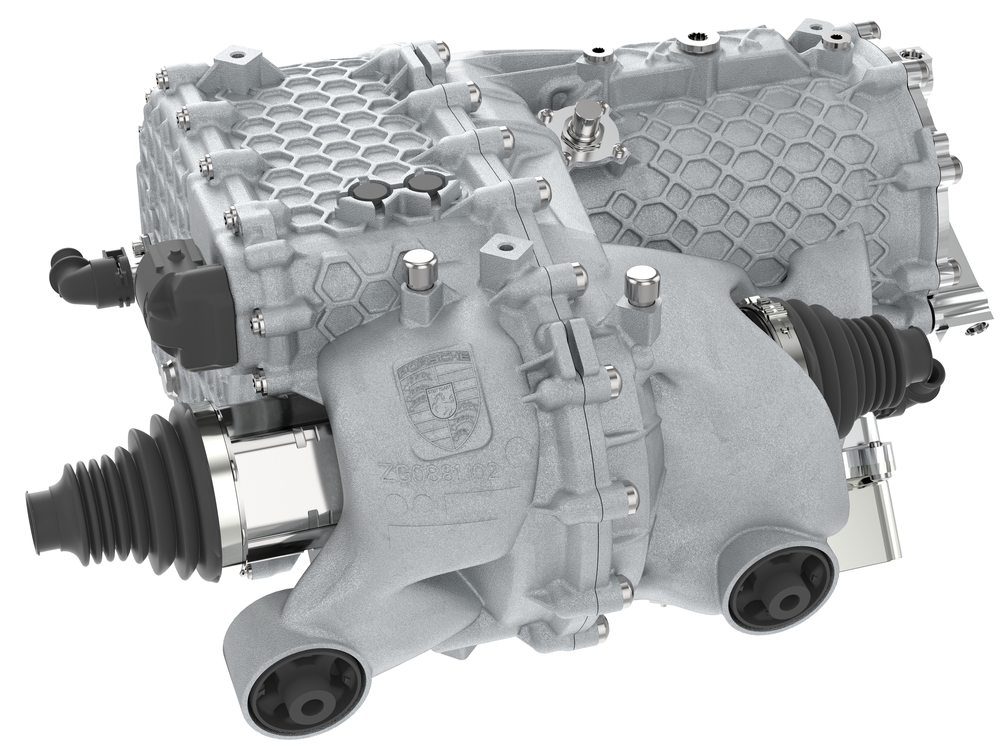 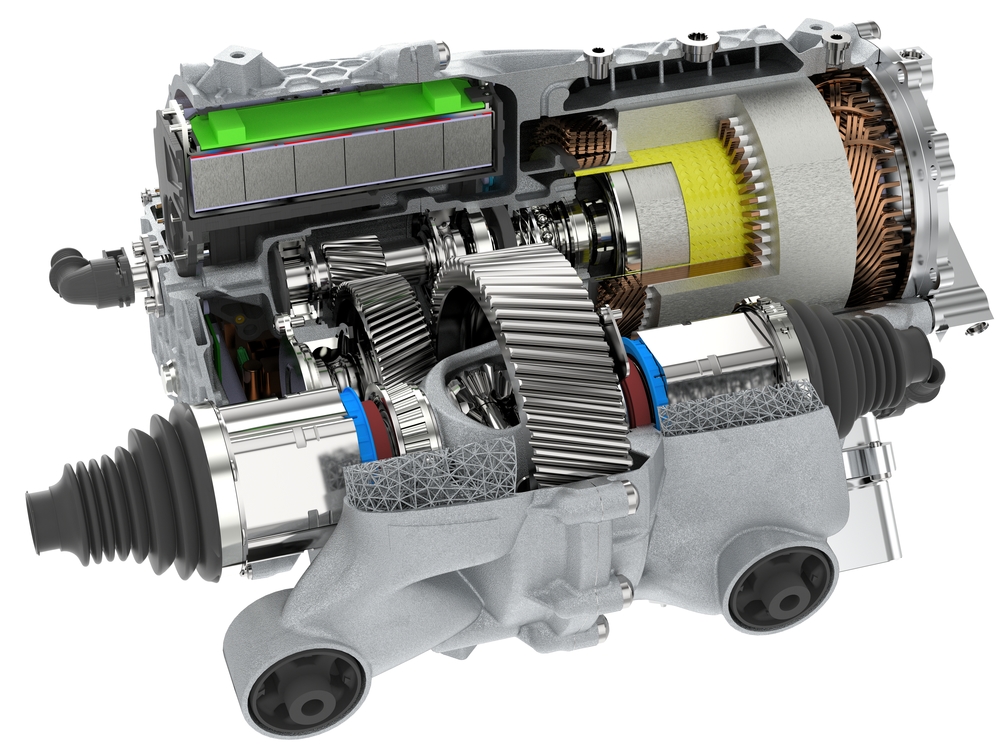 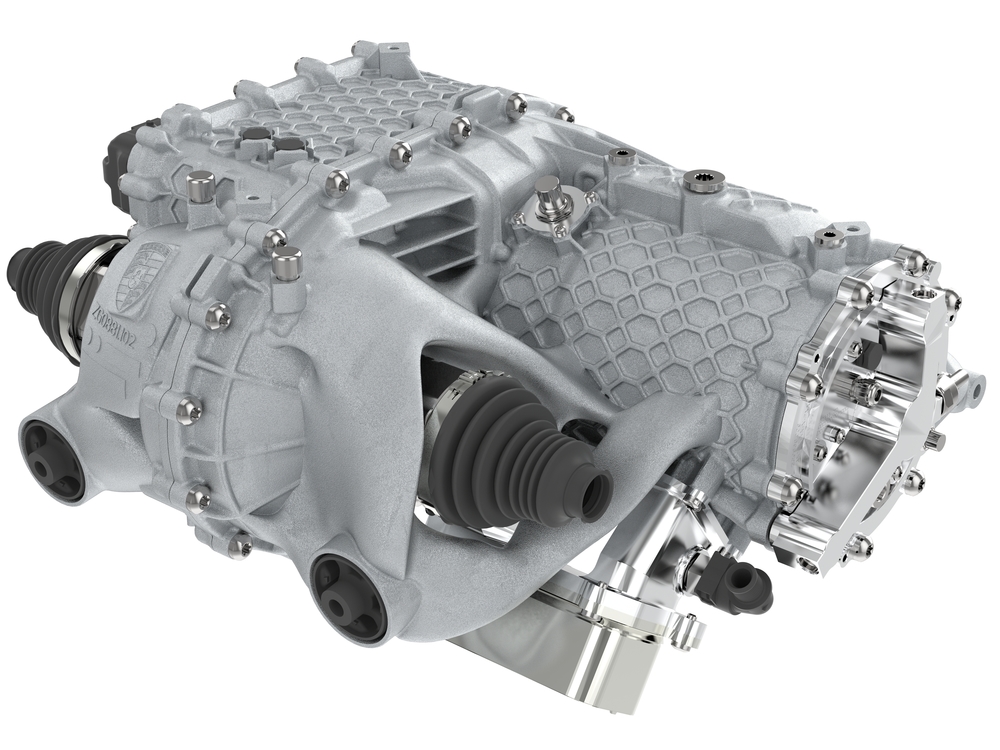 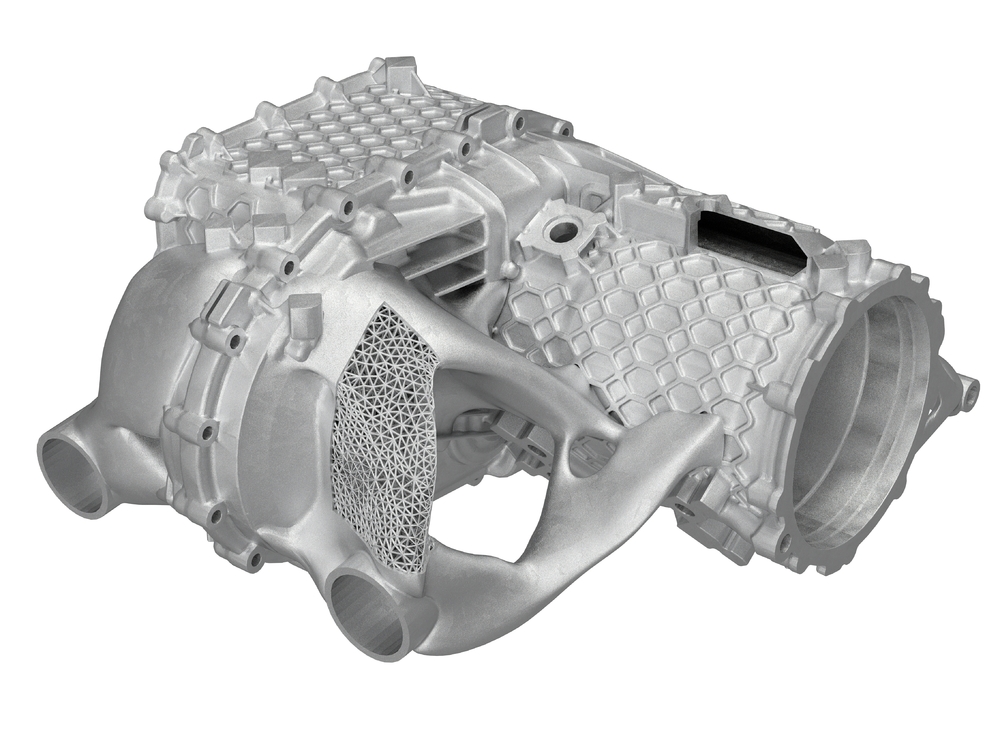 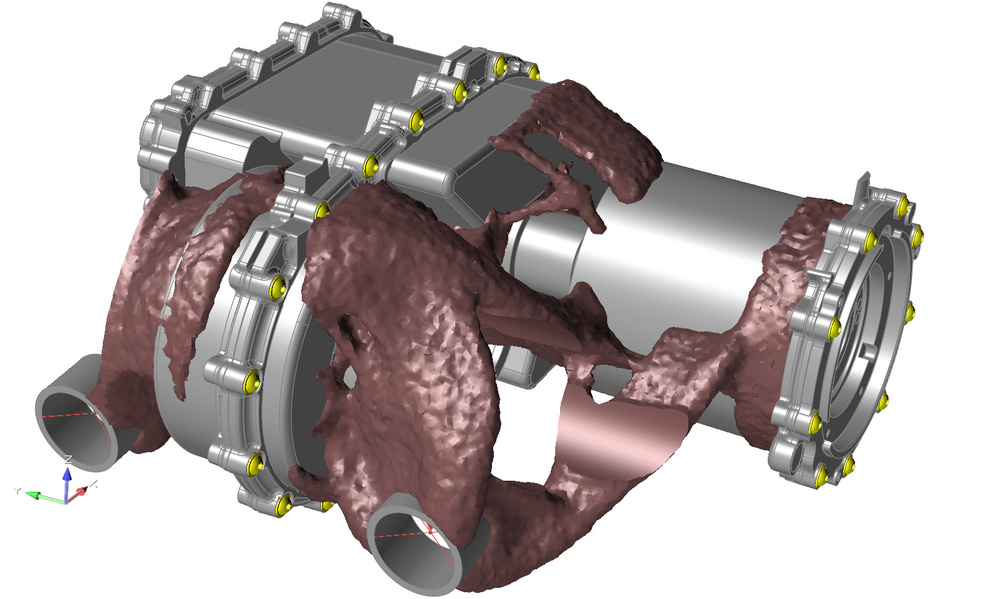 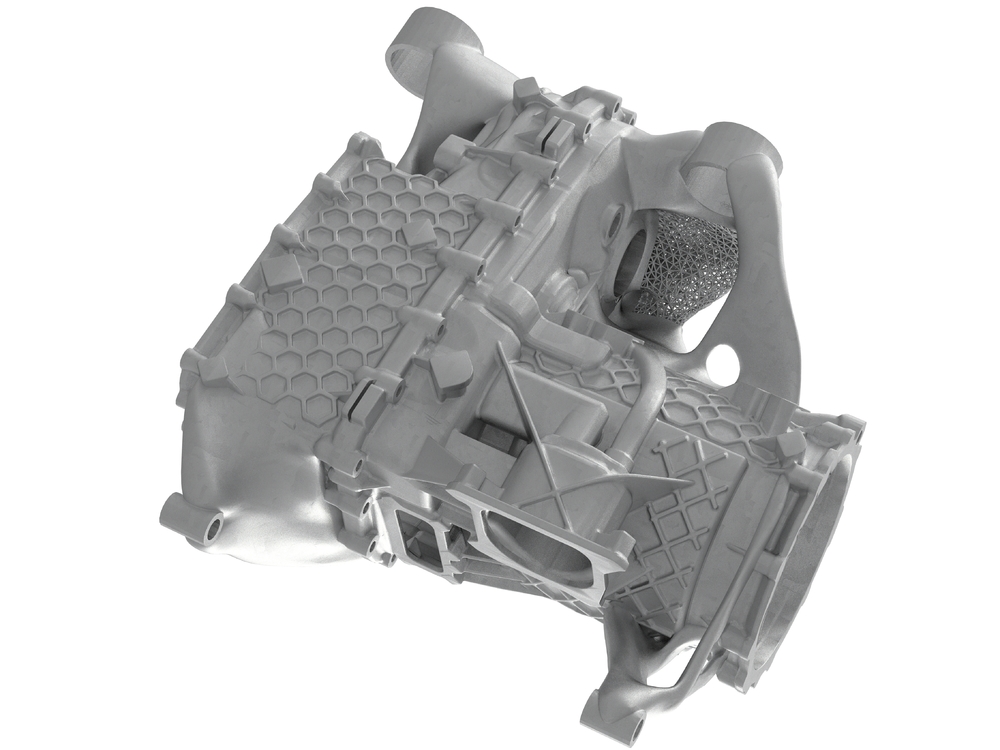 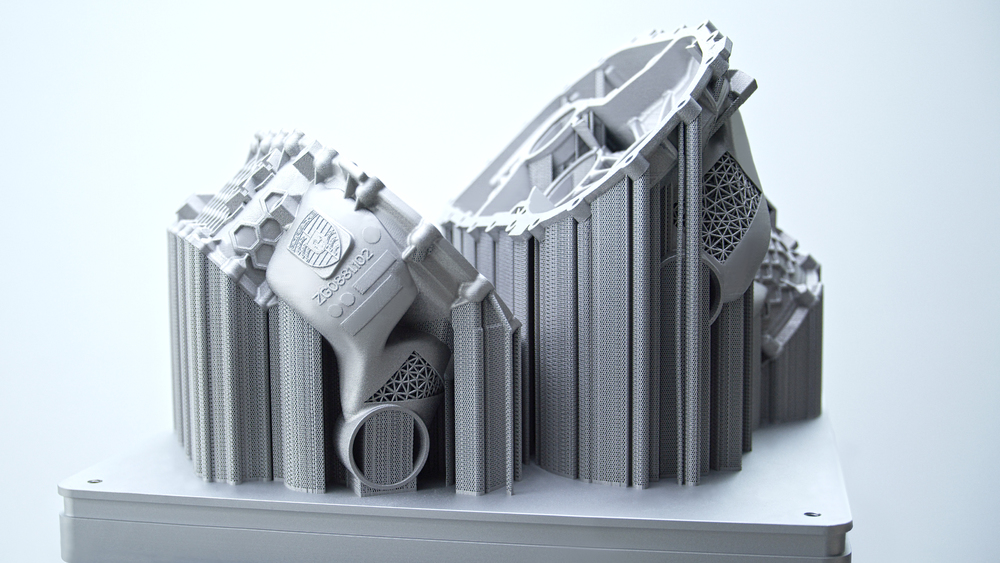 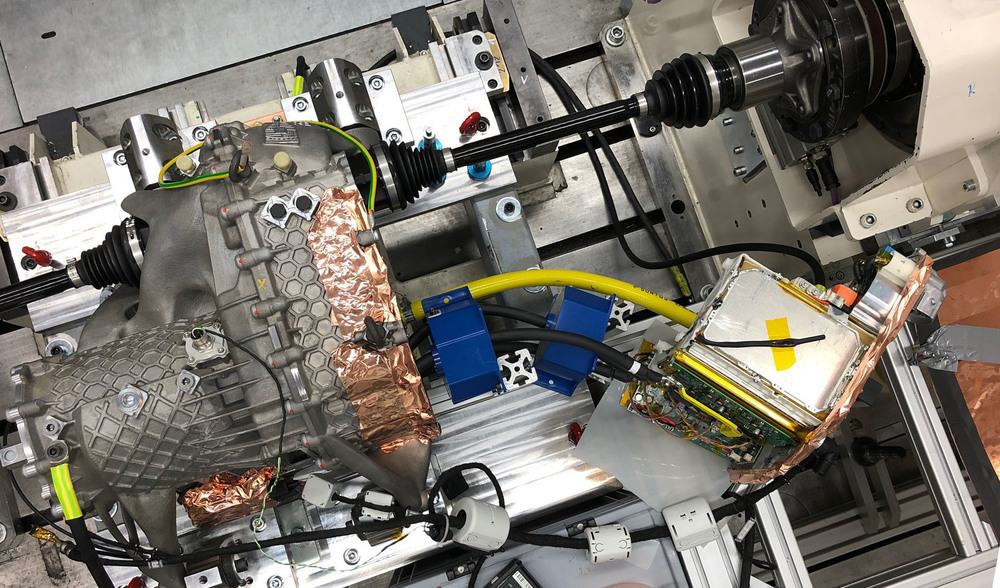 Prototype for small-series production: electric drive housing from a 3D printer shows the potential of additive manufacturing for high-performance drives

Stuttgart . Lighter, more rigid, more compact: has produced its first complete housing for an electric drive using 3D printing. The engine-gearbox unit produced using the additive laser fusion process passed all the quality and stress tests without any problems. “This proves that additive manufacturing with all its advantages is also suitable for larger and highly-stressed components in electric sports cars,” says Falk Heilfort, Project Manager in the Powertrain Advance Development department at the Development Centre in Weissach. It is conceivable that the optimised electric drive could be used in a limited-edition super sports car, for example.

Engineers in the Advanced Development department were able to carry out several development steps at once with the prototype. The additively manufactured alloy housing is more lightweight than a conventionally cast part, and reduces the overall weight of the drive by approximately ten percent. Thanks to special structures that have only become possible due to 3D printing, the stiffness in highly stressed areas has nevertheless been doubled. Another advantage of additive manufacturing is the fact that numerous functions and parts can be integrated. This considerably reduces assembly work and directly benefits part quality.

3D printing opens up new opportunities in development and manufacture of low-volume parts. is intensively driving forward the use of additive manufacturing for optimisation of highly-stressed parts. A few months ago, new printed pistons successfully proved themselves in the 911 GT2 RS high-performance sports car. The housing for a complete electric drive now developed also fulfils high quality requirements. In the same housing as the electric motor, the downstream two-speed gearbox is integrated. This highly integrated approach is designed for use on the front axle of a sports car.

“Our goal was to develop an electric drive with the potential for additive manufacturing, at the same time integrating as many functions and parts as possible in the drive housing, saving weight and optimising the structure,” says Falk Heilfort. No other manufacturing process offers as many possibilities and such fast implementation as 3D printing. data can be fed to the printer directly from the computer without intermediate steps such as tool making. The parts are then created layer by layer from aluminium alloy powder. This makes it possible to manufacture shapes such as housings with integrated cooling ducts in almost any geometry. Every layer is melted and then fused with the previous layer. A number of different technologies are available for this purpose. The drive housing was manufactured from high-purity metal powder using the laser metal fusion process (LMF). Here, a laser beam heats and melts the powder surface corresponding to the part contour.

Optimisation of the electric drive started with the design integration of components such as bearings, heat exchangers and oil supply. This was followed by the computer-calculated definition of loads and interfaces. Determination of the load paths then took place on this basis. The next step in the virtual development method was optimisation of the load paths by integrating the so-called lattice structures. These structures take their cue from nature, and can also be seen in similar form in bones or plants, for ex-ample. “We were able to expand and improve our software solutions and methods for creating such parts and are now able to virtually implement them in a very short space of time,” says Sebastian Wachter, Specialist in Methodology and Topology Optimisation in the Powertrain Advance Development department. When combined with artificial intelligence, interesting approaches for optimising development methods arise here for the future.

However, the extended design freedom offered by 3D printing also goes hand-in-hand with specific design requirements. These include the engineers having to take into account the fact that the work pieces are produced layer by layer by fusion. If there are large protrusions in the shape, supporting elements such as ribs may have to be planned. However, these must not extend into media-carrying ducts. It is therefore important to already take into account the direction in which the layers are built up in the design phase. With the machine technology currently available, printing of the first housing prototype took several days and had to take place in two build processes due to the component size. With the latest machine generations, it is possible to reduce this time by 90 percent, and the entire housing can be manufactured in one build process.

The weight of the housing parts was reduced by approximately 40 percent due to the integration of functions and optimisation of the topology. This represents a weight savings of around ten percent for the entire drive due to the lightweight construction. The stiffness was increased significantly at the same time. Despite a continuous wall thickness of only 1.5 millimetres, the stiffness between the electric motor and the gearbox was increased by 100 percent due to the lattice structures. The honeycomb structure reduces the oscillations of the thin housing walls and thus considerably improves the acoustics of the drive as a whole. The integration of parts made the drive unit more compact, significantly improved the drive package, and reduced the assembly work by around 40 work steps. This is equivalent to reduction in the production time of approximately 20 minutes. An additional benefit: integration of the gearbox heat exchanger with optimised heat transmission improves the cooling of the drive as a whole. This is a basic requirement for further increases in performance.

The housing produced using the 3D printing process again shows the potential of additive manufacturing for when it comes to product innovation in the future. Potentials also arise in the areas of process innovation – agile development and flexible production – and for new areas of business such as customisation with new offers for customers and spare parts. This manufacturing technology is technically and economically interesting for specifically for special and small series as well as motorsports.