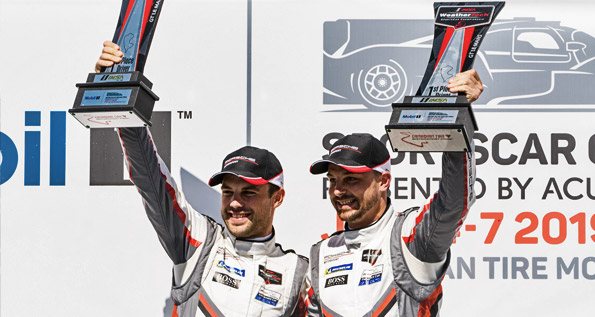 Stuttgart. The GT Team has set a new record in the IMSA WeatherTech SportsCar Championship. Earl Bamber (New Zealand) and Laurens Vanthoor (Belgium) won round six at Bowmanville (Canada) in the No. 912 911 RSR and thus notched up the fifth win in a row for – a feat that no other manufacturer in the GTLM class has managed by now. Their works driver colleagues in the ca. 510 hp No. 911 sister car, Patrick Pilet (France) and Nick Tandy (Great Britain), rounded off the outstanding team result with third place.

The GT Team again implemented perfect pit stops and a good strategy to bring home victory at the Canadian Tire Motorsport Park. Immediately after the start, the factory pilots made full use of the potential of the 911 RSR. In the very first lap, both vehicles gained one position, and after just 20 laps the cars were running in second and third and on course for the podium. With about an hour left on the clock, Bamber moved into the lead, which he retained to the flag. The race over 2:40 hours was interrupted for ten minutes in the closing phase due to a serious accident involving a prototype vehicle. In the final 15-minute sprint, Tandy battled for second place. Although the British racer was unable to find a sufficient gap to overtake, he crossed the finish line just 2.177 seconds behind the winning sister car.

Thanks to this fifth win from six races of the 2019 IMSA season, has further extended its lead in the manufacturers’ classification. Earl Bamber and Laurens Vanthoor have taken over the front spot from their works driver colleagues Patrick Pilet and Nick Tandy, who now rank second.

In the GTD class, the factory driver Patrick Long (USA) and his compatriot Patrick Lindsey secured fourth place. The pair sharing the 911 GT3 R run by Park Place Motorsports narrowly missed out on a podium step by just 0.373 seconds. The identical 500+hp GT3 car fielded by the customer squad Pfaff Motorsports brought home fifth place. The two Canadians Scott Hargrove and Zacharie Robichon had at times been in second place at their home race, but were thrown down the field after being handed a drive-through penalty.

Steffen Höllwarth (Programme Manager IMSA SportsCar Championship): “First of all, I’m really pleased that nothing serious happened to the driver in the terrible accident involving the prototype car. That’s the most important thing. As far as our race result is concerned, I’m simply proud of everyone. We very deliberately implemented two different strategies to be prepared for all eventualities. In terms of the team and the drivers, the race was perfectly executed. Five wins in a row is the well-deserved reward for the great work over these intense weeks.”

Earl Bamber ( 911 RSR #912): “ is the first manufacturer to achieve five straight wins – an incredible record considering the tough competition. The path to victory was paved not only by our perfectly set-up 911 RSR but, above all, by implementing optimal strategies. The sprint at the end was not for the fainthearted. We headed into the final ten laps with cold tyres, and we needed to turn qualifying laps. It was intense, exciting, exhausting and ultimately successful – simply perfect!”

Laurens Vanthoor ( 911 RSR #912): “The best thing about this victory is that we fought hard for it and the team and drivers did a perfect job. That was the key. Again we didn’t have the fastest car on the track, but again we made the most of what was possible. Five straight wins from six races so far this season is an incredible record. In the drivers’ championship, we’ve taken over the lead again. The duel against our colleagues will certainly continue to be intense over the coming weeks.”

Patrick Pilet ( 911 RSR #911): “It’s another banner day for . The team implemented different strategies for our two cars. While we had luck on our side with the tactics at the previous round at Watkins Glen, this time we were behind. Perhaps we could switch roles again at the next race. We’re happy with third place, and five wins in a row for is simply sensational.”

Nick Tandy ( 911 RSR #911): “Scoring five victories in a row, which are divided almost equally between the two driver crews, clearly underline that has two irons in the fire at each race. It’s always the details that make all the difference. Today our strategy was slightly worse, and the tyres on our car deteriorated a little more than those on the sister car. It’s great that the No. 912 car was in the right spot to win.”