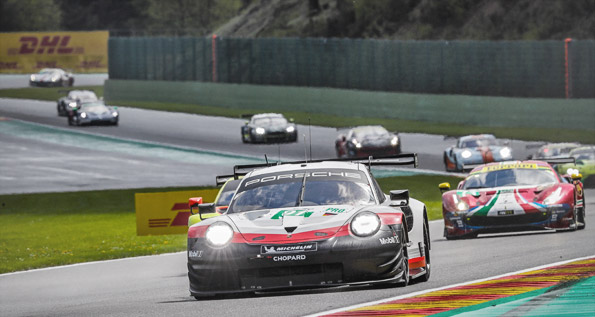 Stuttgart. is the new world champion of FIA World Endurance Championship (WEC). With positions three and eight for the two 911 RSR at Spa, the team from Weissach secured an early title at the penultimate round of the 2018/2019 Super Season.

The two leaders of the drivers’ championship, Kévin Estre (France) and Michael Christensen (Denmark), kept calm in the chaotic weather conditions in Belgium to claim the third podium step after almost six hours of racing. Their driver colleagues Richard Lietz (Austria) and Gianmaria Bruni (Italy) were running in third place at the end of the race, but were handed a drive-through penalty. The 911 driven by Lietz was shunted from behind by a competitor, which pushed the Austrian into the car in front. For this, a drive-through penalty was imposed. As the race was stopped shortly before the six-hour duration due to the weather, the race director converted it into a time penalty. As a result, the No. 91 911 RSR was classified in eighth place and Estre/Christensen moved up one position from fourth to third place.

Fans witnessed a turbulent six-hour race at Spa, Belgium. The changing conditions between sunshine, rain, hail and heavy snow presented teams with major challenges. With a total of 15 pit stops, the GT Team chose the right strategy in the battle for the manufacturers’ championship. After multiple safety car and full-course-yellow phases, the two driver crews Estre/Christensen and Lietz/Bruni never lost their cool and converted the match point into the manufacturers’ world championship title.

In the GTE-Am class, the No. 77 911 RSR fielded by Dempsey Proton Racing notched up its third straight win. Sharing the cockpit of the winning car was Young Professional Matt Campbell (Australia), Christian Ried (Germany) and Riccardo Pera (Italy). The second best customer squad was Project 1 in fifth place. The factory driver Jörg Bergmeister (Germany) shared driving duties in the No. 56 car with the American Patrick Lindsey and Egidio Perfetti from Norway. Gulf Racing with Young Professional Thomas Preining (Austria) and the two British racers Michael Wainwright and Benjamin Barker came seventh. The second 911 RSR campaigned by Dempsey Proton Racing concluded the race on the 7.004-kilometre “Ardennes rollercoaster” on ninth.

Comments about the race

Fritz Enzinger (Vice President Motorsport): “For , this is the continuation of successful years. First, we won six titles with our LMP1 programme, and now the WEC manufacturers’ title in GT racing after a crazy race. is a major player in motorsport. You can see how motor racing successes can inspire an entire company. I’d like to thank all of our employees who contributed to this outstanding success!”

Pascal Zurlinden (Director GT Factory Motorsport): “It’s hard to find the words to describe how proud I am that we’ve won the manufacturers’ title for with this incredible team. The race was a rollercoaster of emotions for us. The weather threw everything at us: snow, rain, hail and sunshine. We were at the front and at the back of the field at times. The weather also turned our strategy upside down, but we simply kept pushing our way back up through the field. What a day!”

Kévin Estre ( 911 RSR #92): “Crazy, completely crazy – that’s the best way to describe this race. Most of the time it was really difficult to keep the car on the racetrack and sometimes we had to take a gamble. But the main thing is that we’re the manufacturer world champions! That’s a big success, a huge success. The drivers’ world championship decision will have to wait until Le Mans, but we’re leading by a huge margin.”

Michael Christensen ( 911 RSR #92): “That was probably the most extraordinary race in my career. As far as the weather was concerned, it couldn’t have been more chaotic. Everyone in the team had to remain calm, including us drivers. It worked and in the end we climbed the podium in third place.”

Richard Lietz ( 911 RSR #91): “As expected, the weather made the race chaotic. Unfortunately at the end we were handed a penalty, which I can’t fully understand. But rules are rules and I accept that. is the manufacturers’ world champion. That’s what counts today!”

Gianmaria Bruni ( 911 RSR #91): “Our goal was to claim the manufacturers’ title here, and that’s what we did, in spite of the very difficult race with wild weather conditions. I’m delighted to have contributed to this fantastic result for and I’m very happy to be part of this team.”

Matt Campbell ( 911 RSR #77): “I’ve never experienced a race like this before. Sun, rain and snow made it extremely difficult in terms of strategy. The team did a particularly great job in the tricky tyre choice. And my two teammates Chris and Riccardo drove an almost flawless race. As was the often the case this season, that was the key to success.”