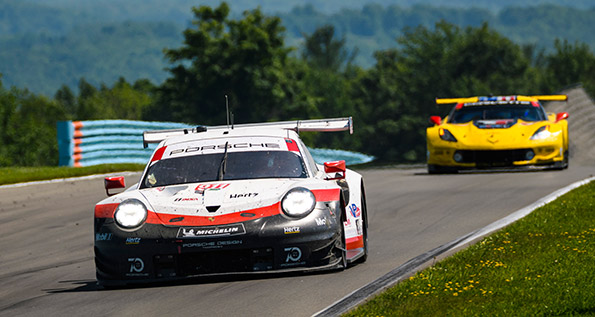 The six-hour race at Watkins Glen in the US state of New York turned into a heated battle: In temperatures reaching 34 degrees Celsius, the ca. 510 hp 911 RSR scored positions three and four. At round five of the IMSA WeatherTech SportsCar Championship on Sunday, the Frenchman Patrick Pilet and Nick Tandy from the UK crossed the finish line ahead of the sister car driven by Laurens Vanthoor (Belgium) and Earl Bamber (New Zealand). In the GTLM class, the GT Team has notched up two wins so far this season at Sebring and in Mid-Ohio. After five championship rounds, ranks second in the manufacturers classification.

When the 42-strong field rolled onto the grid on Sunday morning, the temperature had already reached 30 degrees Celsius. In the GTLM class, in which four different automobile manufacturers fight for points, the two 911 RSR took up the race from the third grid row. Putting in swift pit stops and spectacular overtaking manoeuvres, the two vehicles battled their way up the field. Halfway through the race, they were running in first and second. When the safety car was deployed half an hour later, both frontrunners were struck by bad luck: Just as they were about to enter the pits to refuel and change tyres, the pit lane closed. Several competitors who were far behind managed to complete their pit stops shortly before this happened. This occurrence, however, threw both 911 RSR back to positions four and six. In the last hour of racing, Laurens Vanthoor in the #912 car was again hampered by a safety car phase and had to ultimately relinquish the fight for a podium spot.

managed to earn important points towards the North American Endurance Cup. After three of four races, lies in second place. The long-distance classics that count towards this classification are the 24 Hours at Daytona, 12 Hours at Sebring, 6 Hours at Watkins Glen as well as Petit Le Mans at the legendary Road Atlanta, which is run over ten hours.

Two 911 GT3 R contested the GTD class on the storied 5.472 kilometre racetrack. Patrick Lindsey (USA) and Jörg Bergmeister (D) occupied sixth place. Due to an accident, the duo were unable to take part in the qualifying and thus took up the race from position 18. Patrick Long (USA), Selected Driver Christina Nielsen (DK) and Robert Renauer (D) drove the #58 car sporting the US flag livery. The driver trio took up the race from eighth on the grid to cross the finish line in ninth place.

Round six of the IMSA SportsCar Championship will be contested on 8 July in the Canadian Tire Motorsport Park in Bowmanville/Canada.

Steffen Höllwarth, Programme Manager IMSA SportsCar Championship: “We can be happy with positions three and four. A clever tyre choice and a good strategy put us in the lead in the first half of the race. Then the safety car came out at an inopportune time. Several parts were lying on the track, but it wasn’t as if a car had hit the wall. For this reason you didn’t necessarily expect the safety car to be deployed. Several vehicles that were running far behind us opted to take the risk and come in for an early pit stop and that brought them forward. But when you’re running in the lead you don’t risk making such a stop.”

Patrick Pilet ( 911 RSR #911): “It was a very intense race. The heat inside the cockpit was extreme and during my final stint my drinking system didn’t work. Now I’m thirsty but I’m also pleased to have climbed the podium. The race was a little complicated. At the beginning I was really wedged in and that means you lose a lot of downforce. In terms of strategy I’m proud of the team. We responded well. Ultimately we earned important championship points to take home.”

Nick Tandy ( 911 RSR #911): “I’m pleased that we finished on the podium. Our car was fast and reliable. The caution phases didn’t go so well for us, but that’s typical for sports car races. When we were leading I could really go flat out. Overtaking, however, was extremely difficult.”

Laurens Vanthoor ( 911 RSR #912): “We did our best and fought hard. The field was very tight so it came down to the details. Our speed was good but we simply got stuck behind other cars too often. Implementing various strategic measures we attempted to manoeuvre ourselves out of these situations but it didn’t work. Luck simply wasn’t on our side today.”

Earl Bamber ( 911 RSR #912): “It was a close race with many great duels. We had bad luck with the safety car and five seconds made all the difference. At times it looked as if we could win the race. We had the speed to win, but overtaking was extremely tricky here. Had we been in the lead longer then things would have gone differently for us with the pit stops.”