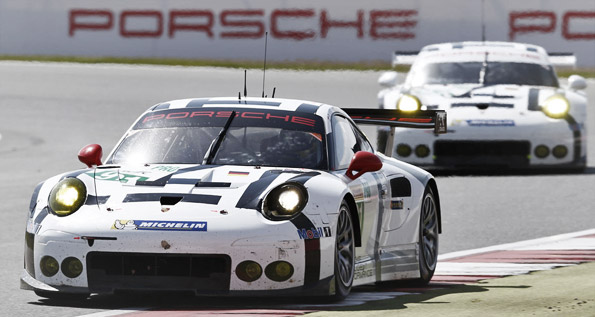 Stuttgart. A successful start to the season for the Manthey team in the Sports Car World Endurance Championship WEC: At the six-hour race on the Silverstone Circuit, works drivers Michael Christensen (Denmark) and Richard Lietz (Austria) clinched second in the GTE-Pro class in front of over 45,000 spectators. The 470 hp winning racer from Weissach – which is based on the seventh generation of the iconic 911 sports car and has been modified in several areas for this season – was just ten seconds shy of the leader after 172 laps. In the sister 911 RSR, their French works driver colleagues Frédéric Makowiecki and Patrick Pilet had been running in the lead at the halfway mark, but ultimately saw the flag in seventh.

Early in the race on the storied British race track on which last year scored a double class victory, the #92 911 RSR powered by the legendary flat-six engine in the rear swept into the lead. After all the teams had completed their first pit stop, starting driver Patrick Pilet moved to the front of the strong GT Field for the first time. Frédéric Makowiecki defended the top position and handed the 911 RSR after his stint to his teammate. While still running in first, Patrick Pilet was forced into the pits halfway through the race with a defective shock absorber. Repairs put them more than one lap down and cost them their chance of victory.

At that point, all hopes for the Manthey team rested on Michael Christensen and Richard Lietz in the #91 contender. The pair honed in on their rivals in front, and put them under increasing pressure in the last two hours. First, Richard Lietz slipped into third place, with Michael Christensen snatching second in the final phase before going in pursuit of the leader. Putting in a faultless drive and consistently fast lap times, he finally brought home second place for the Manthey squad.

Dr Frank-Steffen Walliser, Head of Motorsport: “That was a perfect race for our number 91 car. The drivers, pit crew and engineers did a superb job. We’re very pleased with second place. And with the number 92 , we can’t fault the drivers’ performance, the strategy or the pit stops. We’ll now analyse the shock absorber problem and make sure it doesn’t happen again. All in all, it was a positive start to the season for us.”

Michael Christensen ( 911 RSR #91): “It was good start to the season. We had a very well set-up car and we were within striking distance to the top at all times. The whole package works. In an ideal situation, more would certainly have been possible. In the last hour of racing we tried everything to win. At the flag we were only seconds away from victory.”

Richard Lietz ( 911 RSR #91): “I’m very happy with my start and I managed to quickly make up positions. My stints were all very consistent. In my last stint I was running on used rubber from the qualifying because the regulations stipulate only a limited number of new tyres, but even then I was reasonably pleased. We did our best as a team and we were rewarded with second place. That’s not bad for a start.”

Patrick Pilet ( 911 RSR #92): “That was bad luck. When you’re leading the race for such a long time, you want to win, of course. Still, compliments to our team. The strategy was good, the pit stops were perfect and our mechanics changed the broken shock absorbers in record time. Even so, the race for us was over. This wasn’t exactly how we’d hope to start the season, but we can build on today’s effort. Now we’re turning our attention to Spa.”

Frédéric Makowiecki ( 911 RSR #92): “After we pitted because of the defective shock absorber our chances went up in smoke. From that point on we simply concentrated on bringing our car safely to the finish. The team put a great car on the track for us and we were definitely in winning form. Now we have to focus on Spa and hope for a better result on the fascinating race track.”

Patrick Dempsey ( 911 RSR #77): “The start to the new season wasn’t easy. I wasn’t able to take part in the Le Castellet tests and could only arrive in Silverstone after the second practice. Under these circumstances I feel we did quite well. We improved from day to day and we’ve pulled together even more as a team. The support that has given us is fantastic. All in all, that was a good start to the season for us.”

Patrick Long ( 911 RSR #77): “It was a tough day for us. Apart from our unscheduled pit stop early on in the race where we had to make several minor changes to the car, everything actually ran according to plan. Working with Patrick and Marco went very well. Patrick did a great job. During his second stint, he was three seconds faster per lap compared to his first. As a team we can build on this – first in Spa, then at Le Mans. That’s our main goal for this season.”