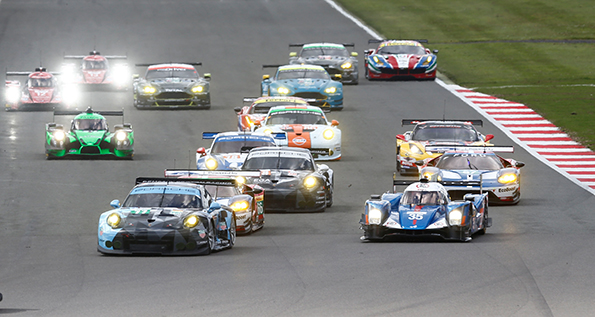 For the four customer teams, the six-hour race in Silverstone, which kicked off this year’s Sports Car World Endurance Championship WEC, yielded some positive insights in the fiercely competitive GT field, despite some setbacks. In both the GTE-Pro and GTE-Am classes, the 470 hp 911 RSR, which is based on the seventh generation of the iconic 911 sports car, was running in the lead for long periods of time. With 30 minutes to the flag, the two nine-eleven contenders looked good for a podium finish on the storied British racetrack. But ultimately it proved not enough for a successful start to the season.

Richard Lietz (Austria), who won the FIA Endurance Cup last year as the best GT driver, got away well at the start in his 911 RSR fielded by Dempsey Proton Racing. When he handed the vehicle off to his teammate Michael Christensen, he was running second in the GTE-Pro class. The Dane managed to fend off spirited attacks from his pursuers – only to lose time in the pits with his 911 RSR. Although he eventually rejoined the race, he had lost too much ground to catch his rivals.

Right up until shortly before the finish, two 911 RSR contesting the GTE-Am class had excellent chances for podium spots. The 911 campaigned by Abu Dhabi Proton Racing was lying in second, with the 911 RSR of KCMG right behind. But they too were unable to maintain their positions to the flag. KCMG finally finished in fourth, with Abu Dhabi Proton Racing scoring fifth. Sixth place went to Gulf Racing. Like KCMG, Gulf Racing contested the WEC for the first time with a 911 RSR.

Race quotes
Richard Lietz ( 911 RSR #77): “We were lying second when we had to pit and were thrown down the field. We were definitely on track for a podium, but then of course our chances disappeared. Still, we’d found a very good and fast setup for our 911 RSR.”
Michael Christensen ( 911 RSR #77): “After our great performance in qualifying we had high hopes for the race. But then we had a problem. Our engineers will now carefully analyse this.”
Wolf Henzler ( 911 RSR #78): “When you’re so close to scoring a podium result only to finish fourth it’s understandably disappointing. We would all have prefered a successful start to the season. Nevertheless, I’m looking ahead to the next race with confidence.”

Round two of the Sports Car World Endurance Championship WEC is contested on 7 May on the tradition-steeped Spa-Francorchamps racetrack.