In the still of the night

London, a magnet for creativity, is quickly becoming a hot spot for young fashion designers from around the world. London generates more exciting, young design talent than almost any other city in the world. We visit the studios of ambitious emerging designers to learn about their backgrounds, motivations, and aesthetics. What happens when someone from a tropical Chinese island injects the flair of his homeland into Western fashion trends?

London’s status as a modern fashion metropolis is of relatively recent vintage. In contrast to New York, which was already setting trends in 1943, it would be another thirty-two years before models graced the runway at fashion shows in the British capital. Today, London is one of the “Big Four” fashion capitals of the world, together with New York, Paris, and Milan. British cool in competition with French haute couture and Italian grandezza. Thousands of buyers from all over the world descend on the Thames to attend London Fashion Week every February and September. And it’s an industry that keeps on growing, according to the British Fashion Council, host of London Fashion Week.

In the slipstream of the established labels, there’s a thriving young start-up scene enriching the market with bold, progressive, and avant-garde fashion. One of these aspiring young designers is Maritta Nemsadze, who sits at a knitting machine in a coworking space sectioned off by drywall. A clothes rack holds her latest designs: the dresses are simply tailored, almost delicate, with interwoven copper and aluminum threads. “It’s probably my great-grandmother’s fault that I specialize in knitwear techniques,” says the thirty-year-old Georgian. “She started teaching me how to knit when I was three. And she was masterful at it—that’s what got her family through the Second World War.”

Le Roni
Turning heads: Feathers, lace, and other materials come together in the eccentric headwear of this young designer from Paraguay.

Nemsadze’s milieu is the melting pot of East London. Artists and creatives have poured into the borough of Hackney, which was once populated by laborers and immigrants. A fascinating mix of different cultures has emerged that exerts a magnetic effect on young fashionistas, and the city seeks to encourage them. Young designers experiment with unconventional ideas, throwing unbridled energy into new forms of expression, as more and more fashion start-ups constantly appear. The spring shows in Berlin, Milan, and Paris have already taken place, as has London Fashion Week, but just because the circus of star designers has left the city doesn’t mean that individuals like Nemsadze will let up. On the contrary, they’re working feverishly on their collections for 2018. Fashion never stops to catch its breath, and beauty is not bound to any style.

Nemsadze made her first clothes at the age of ten. It was a natural progression for her to attend London’s Central Saint Martins, whose outstanding reputation attracts talent from around the world. Even today knitting reminds her of her homeland, the Caucasus, where the inhabitants of its remote mountain regions make weather-resistant winter clothing out of sheep’s wool. The idea of sustainable and long-lasting attire continues to influence her approach to fashion. “We buy too many clothes that we don’t even need—just because we can afford to,” she says. “But no one would discard a handmade dress of copper thread after just a few weeks. I make clothing that is both luxurious and sustainable.” And that may be less of a contradiction than it seems.

The unassuming street where twenty-two-year-old Le Roni has rented space is far removed from the glamourous world of high fashion. Yet when he presents his work on a simple table, you immediately sense that he—like so many ambitious designers in London—wants his fashion to tell stories. Le Roni originally came from Paraguay to London to learn English. Two years ago, he happened to accompany a friend to a party during London Fashion Week wearing a headpiece he had made out of plastic bags. People’s reactions were so encouraging that he began to make more headpieces out of unusual materials. His initial designs won him a development grant. Stylists at a major fashion magazine noticed his work, which was soon covered by a number of leading publications. And now his first clients—from eccentrics to self-assured businesswomen—are wearing his creations.

Le Roni still pays his rent by working at a supermarket. But when he creates his fantastical headwear from feathers and homemade lace using a centuries-old weaving technique from the indigenous people of his homeland, he’s very close to the star designers he admires, such as the late Alexander McQueen. Le Roni’s most recent series of headpieces evokes the unending cycle of nature—from birth and the full blossom of youth through the ups and downs of aging until death, after which a new cycle emerges. And it brings him one step closer to the dream he shares with many young fashion pioneers. “I want to build my own company. And I’ll succeed in doing that, even if it takes a few years.”

A similarly strong will but very different philosophy guides the Chinese designer Rui Xu. Her creations are deeply anchored in the visual arts. Xu, a forty-year-old professor of fashion design from Beijing, who also draws and paints, views her work as wearable art. Her complex creations have appeared in art galleries, and a number of her collections have won awards. What fascinates her about London is how widely different styles converge organically. She herself draws on tailoring and wrapping techniques used in Chinese attire for centuries or even millennia. In 2015 she opened a studio in Kensington that produces her textile artwork under the label “Ruixu.” When tall blonde models from Eastern Europe pose in Xu’s creations in front of London’s red brick walls and urban backdrops, magical moments arise in which Far Eastern tradition meets Western style and the past melds with the future.

Surfing attire from China? “I grew up in Hainan, which is called the ‘Hawaii of the East’ because of its climate,” says twenty-seven-year-old Wan Hung Cheung. Like Maritta Nemsadze, he attended Central Saint Martins, but only after studying conventional tailoring techniques at the London College of Fashion. What happens when someone from a tropical Chinese island injects the flair of his homeland into Western fashion trends? The results can be seen in his colorful collection for this summer. Cheung’s more formal menswear is also deeply influenced by his own personal experience. “I love suits, but I look too young for them because I have the face of a teenager,” he remarks. “When I wear a suit from someone I admire, like Tom Ford, it looks strange—too classic, too grown-up.” Many of his friends have the same problem, he adds, but they are delighted with his attire for boyish adults, which combines Western and Eastern influences.

Niklas Haze
Extraterrestrial ambiance: The models in Haze’s photographs evoke aliens who have landed on the streets of London.

What would fashion be without the right setting? The images on these pages are from Niklas Haze, a twenty-seven-year-old photographer from Germany. Also a relative newcomer to London, Haze is already connected with the city’s next generation of fashion designers. Before his formal education, he assisted leading photographers. During this on-the-job training, he developed a sense for lighting and learned how to work with models—skills that he later refined at school. He was actually looking for more work as an assistant when he arrived in the city on the Thames two years ago. But he quickly built up a network in the fashion scene, met young stylists and designers, and began casting models.

“Fashion photography lets me invent my own worlds,” he explains while describing what motivates his work. “I look for stark settings and visual disruptions that are intended to introduce an element of confusion.” The models in his shots suggest extraterrestrials who have materialized in urban environments of London. “That being said, you should also be able to tell that what I photograph is actually taking place in the real world.” So Haze often shoots his fashion series quickly and very spontaneously. He selects the locations in advance, of course. But the work itself has to take place at a fast pace. “After all, we’re in London,” he says with a smile. “And you can’t hold up the action in a world metropolis for as long as you like.” 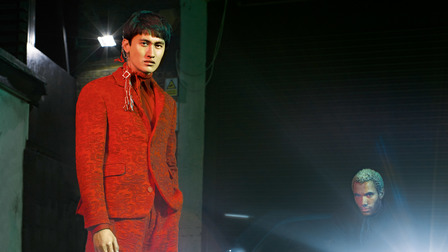 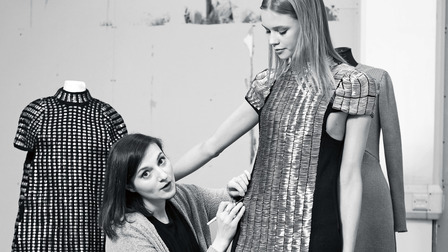 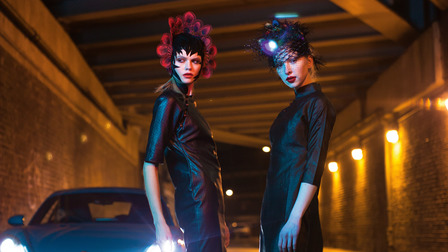 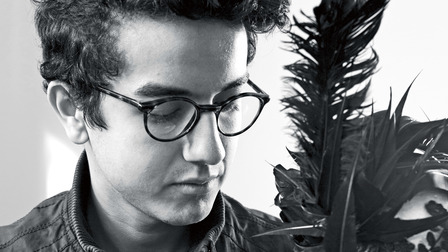 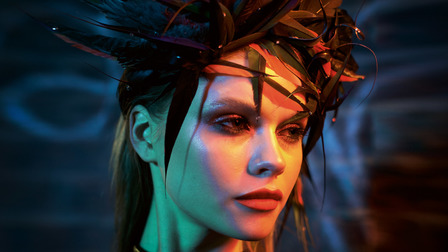 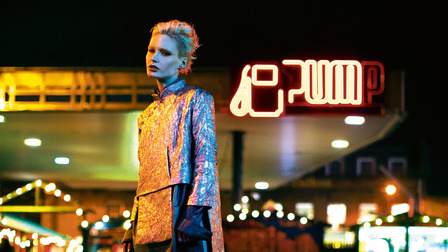 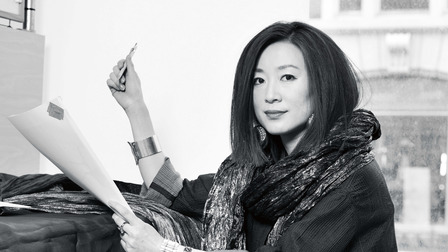 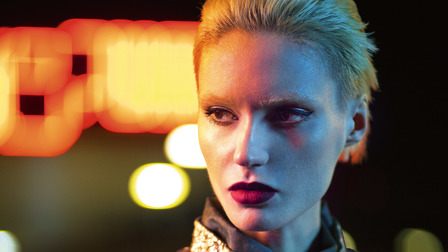 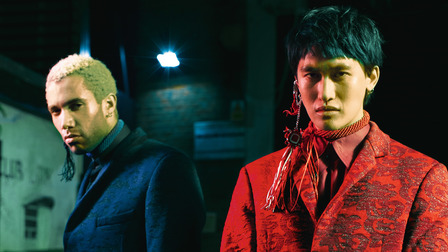 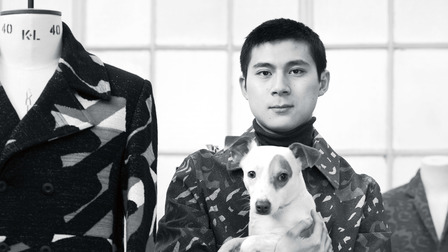 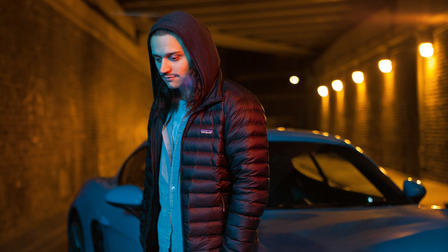 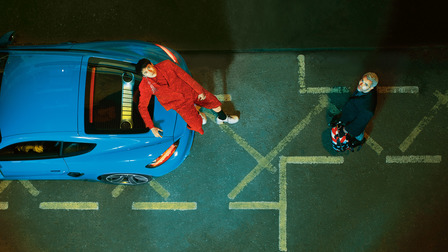