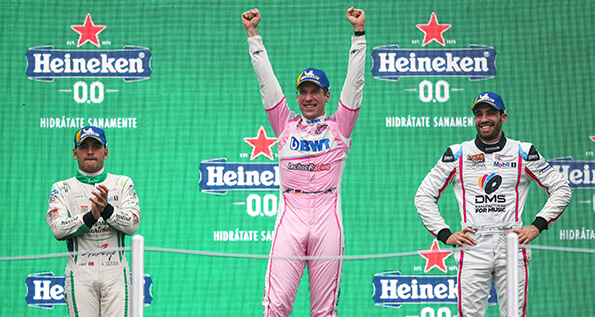 The battle for the championship title of the Mobil 1 Supercup is over. At round nine in Mexico City, Michael Ammermüller (BWT Lechner Racing) scored a lights-to-flag victory. With this result, the German holds an unassailable lead in the series with a 22-point advantage. “This is my third title in a row and that makes me incredibly proud. The fight for the championship was wide open over the entire season, so I didn’t expect to become champion before the end of the season. My start today wasn’t great but I know the circuit well and I managed to pressure Ayhancan Güven into making a mistake,” said Ammermüller. Second place on Saturday went to Ayhancan Güven (TR/martinet by ALMÉRAS) followed across the line by Tio Ellinas (CY/Momo Megatron Lechner Racing). The champions for the two other classifications have also been decided: Thanks to his second place, Güven is the new rookie champion. The BWT Lechner Racing squad takes home the team title.

The race in the Autódromo Hermanos Rodríguez quickly turned into a thriller packed with spectacular overtaking manoeuvres. In the sprint to the first corner after the start, Güven got past Ammermüller in his 485 hp 911 GT3 Cup, however the Lechner driver promptly snatched back the lead in the first lap. Ammermüller deftly defended himself and managed to pull clear of the field. After 16 laps, the seasoned specialist crossed the finish line first, 4.9 seconds ahead of Güven – and thus netted his third victory of the season. Güven’s podium result was his fourth this year. “The rookie title means a great deal to me because in the past it’s only been won by really successful drivers. I’m happy with my race. This is my first time in Mexico and Michael Ammermüller had a wealth of experience to call on,” declared the young Turkish racing driver.