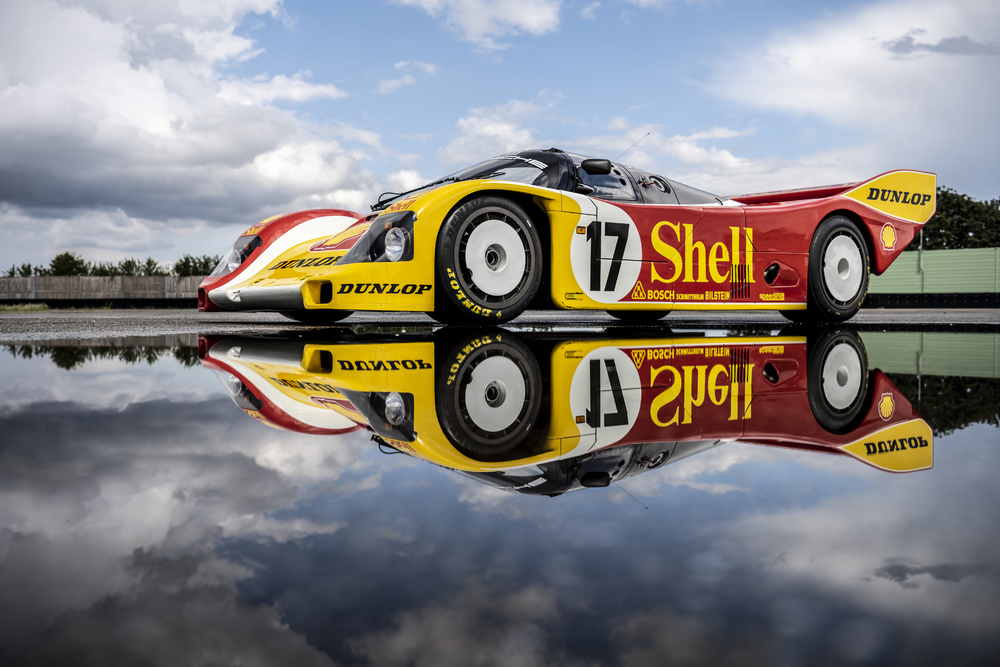 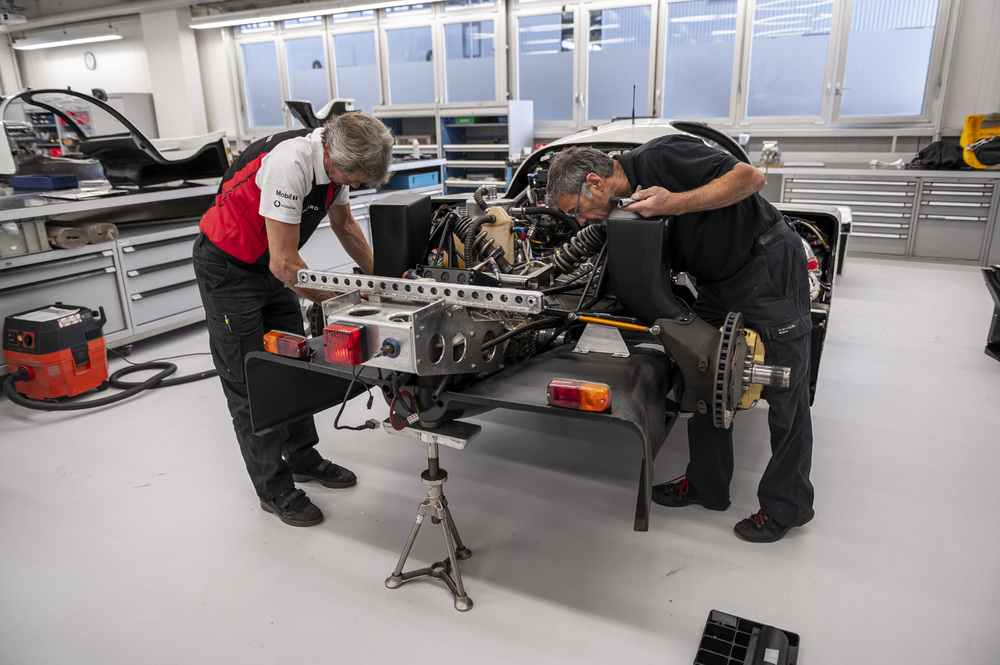 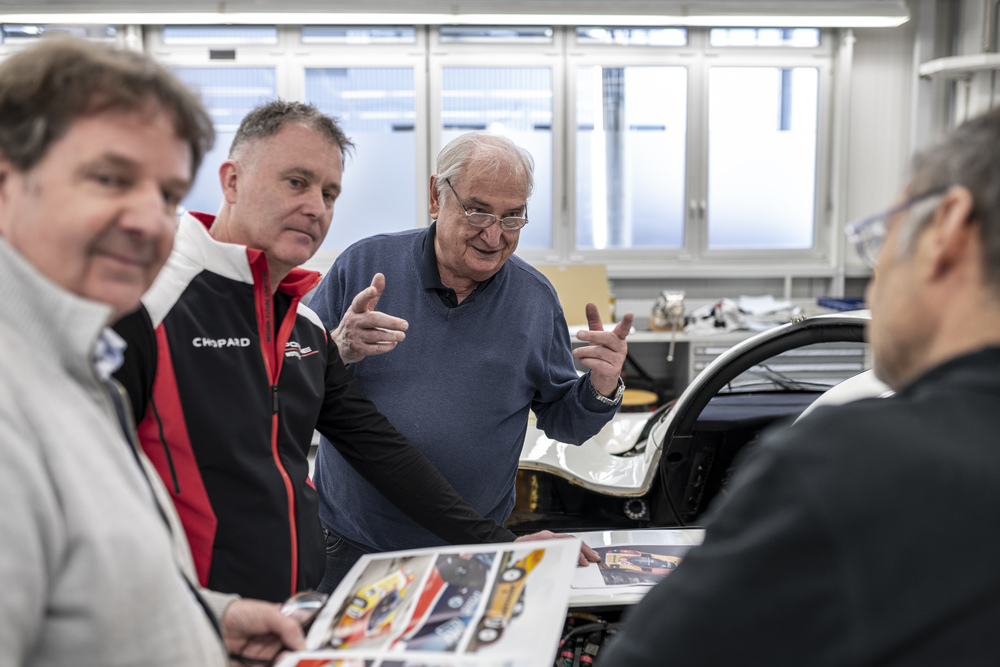 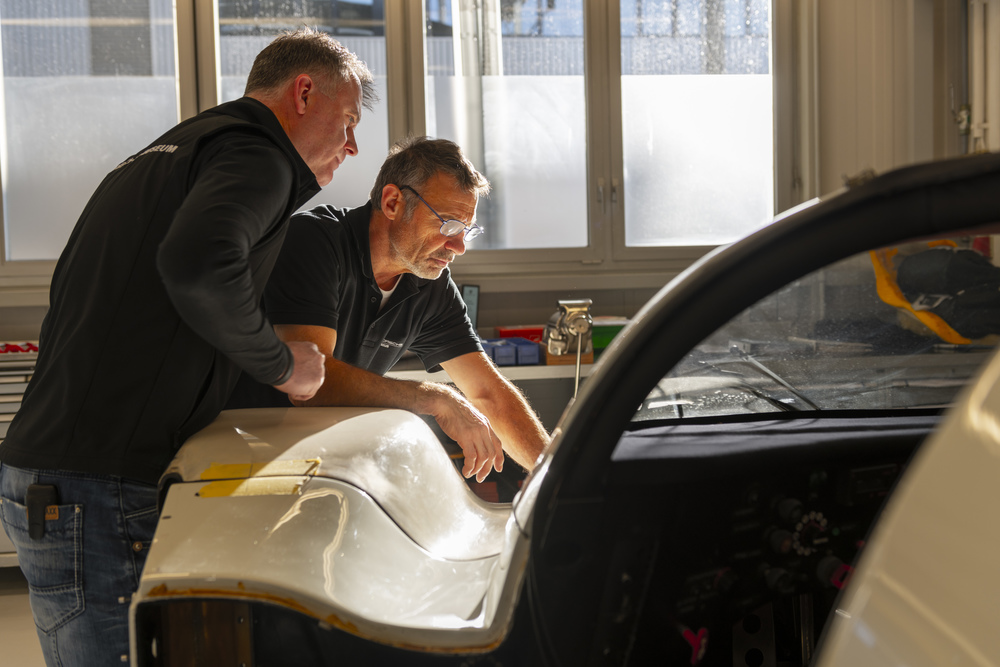 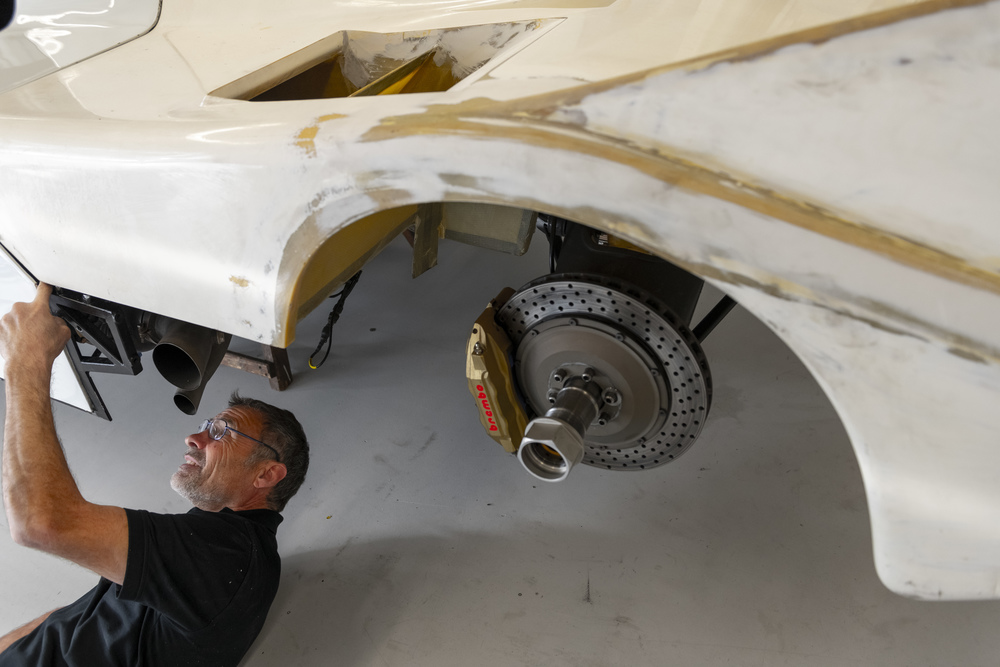 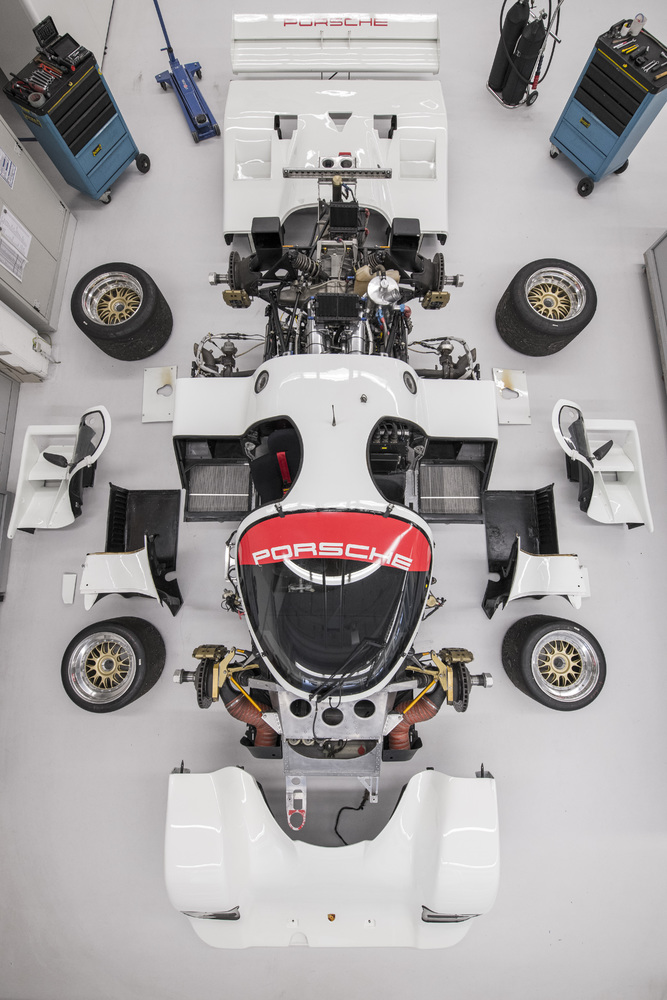 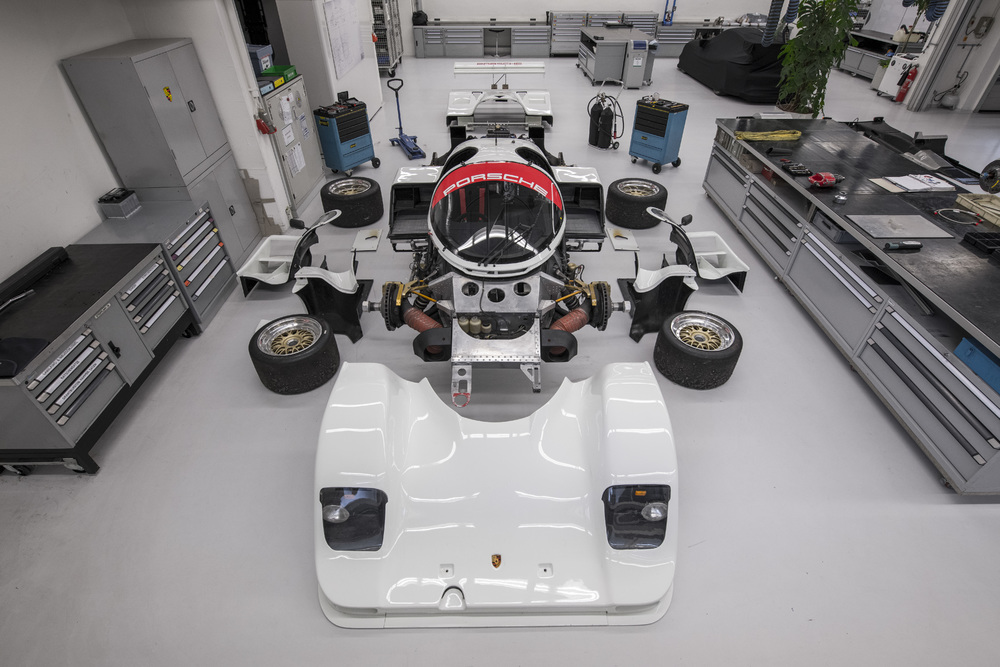 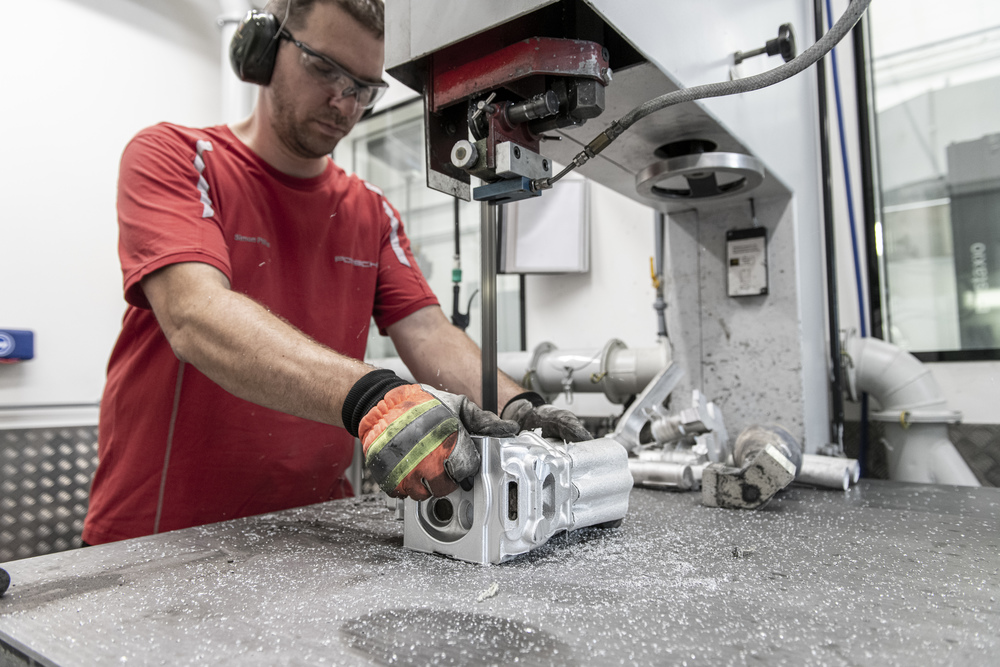 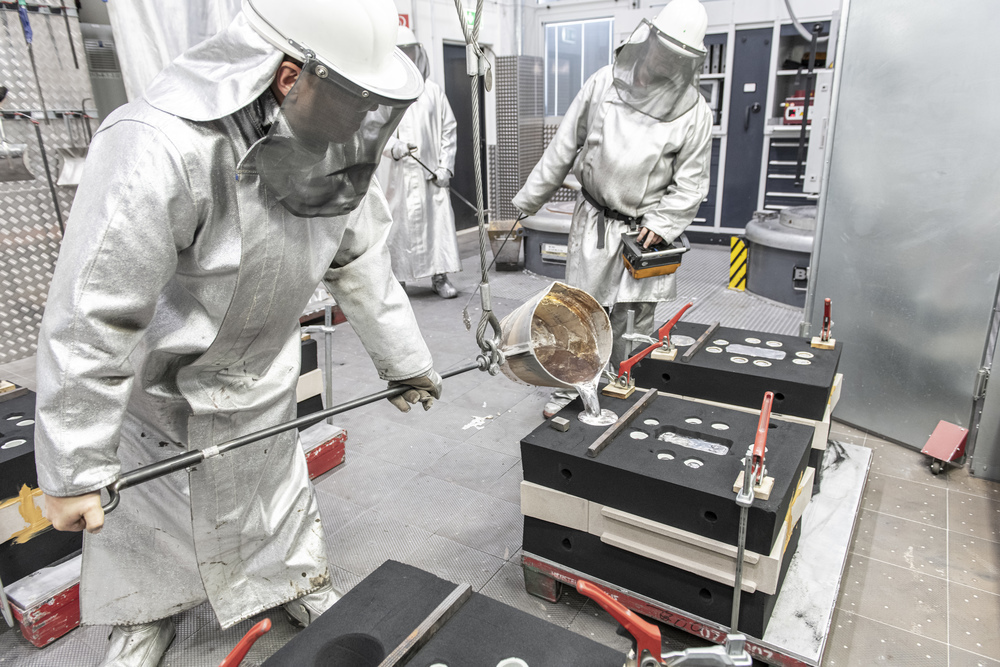 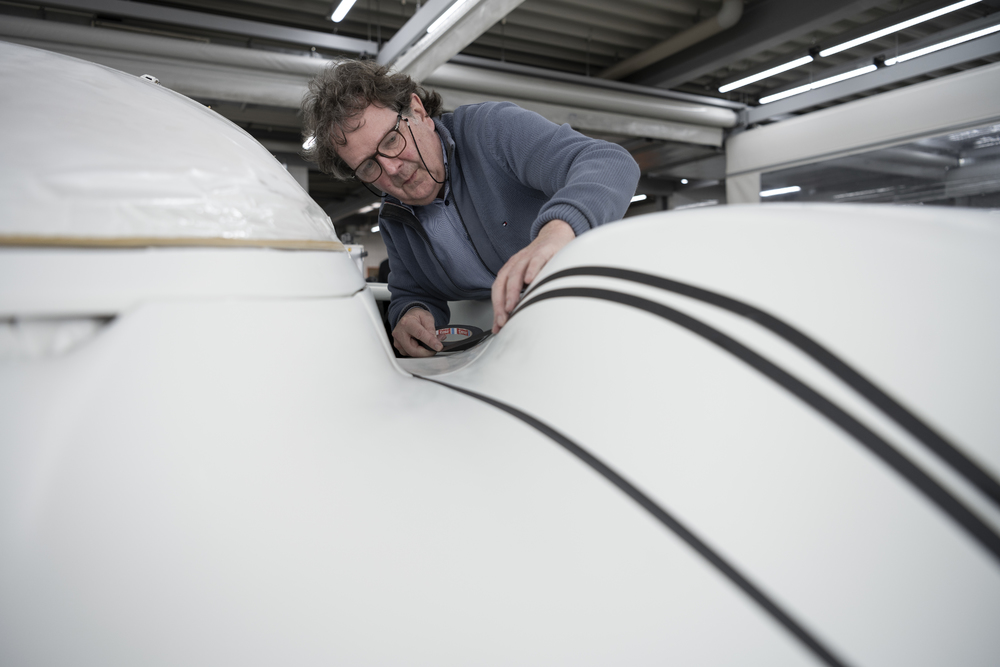 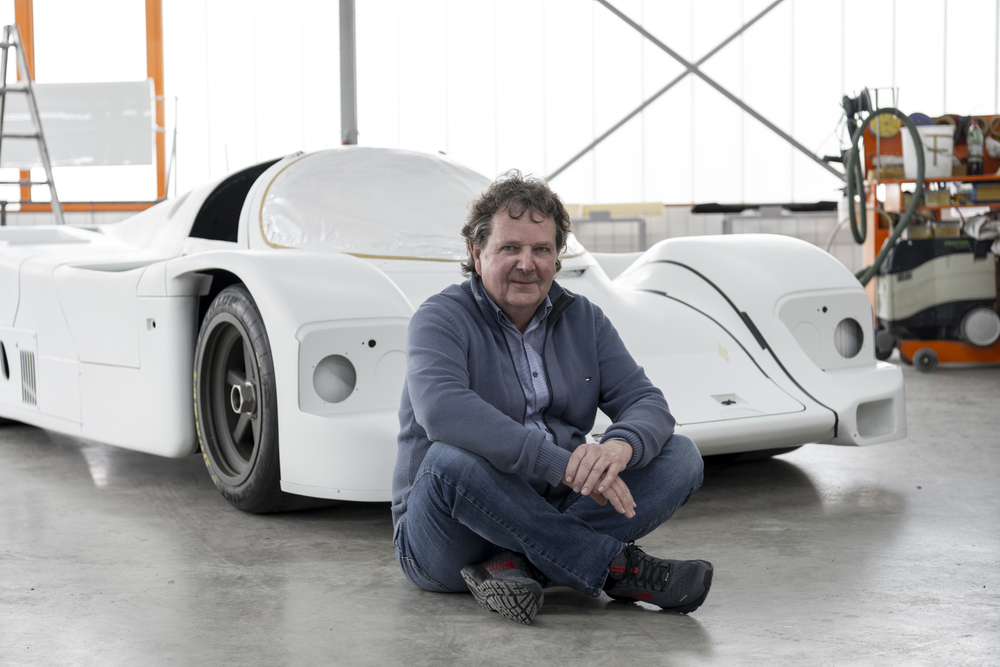 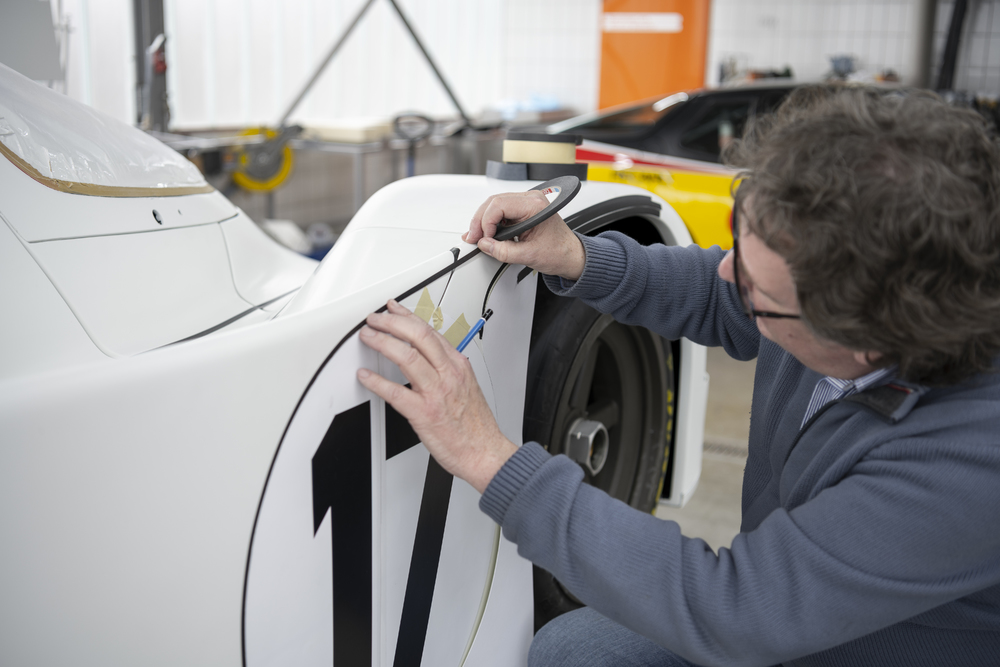 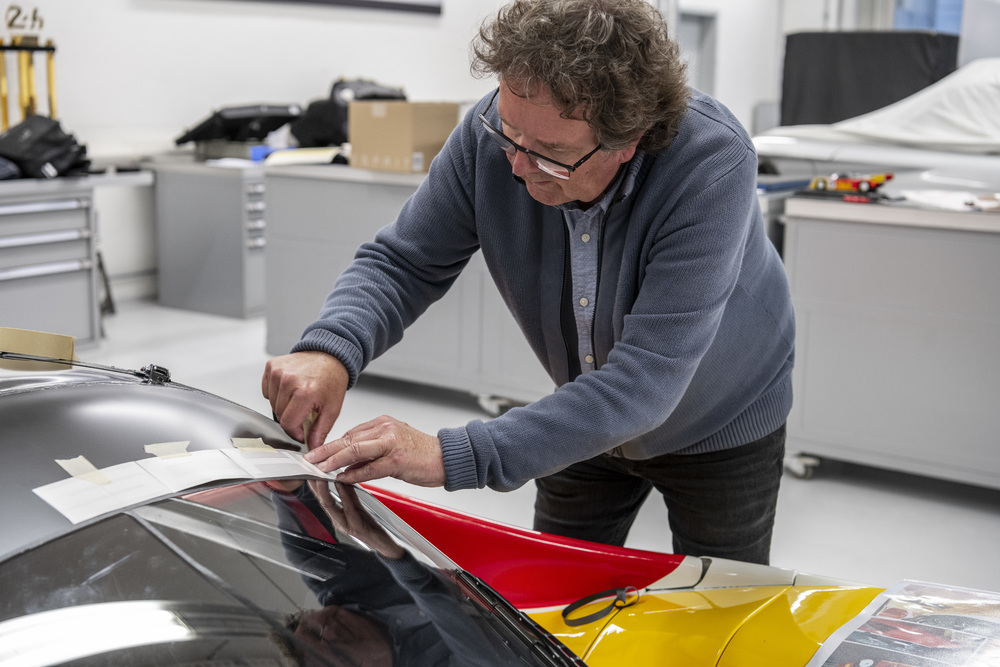 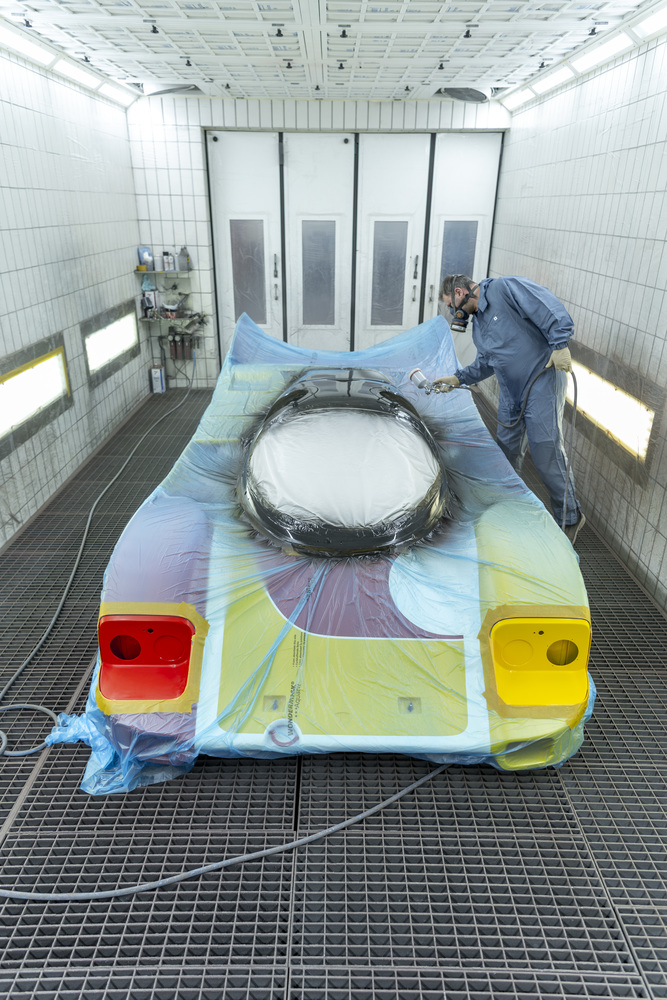 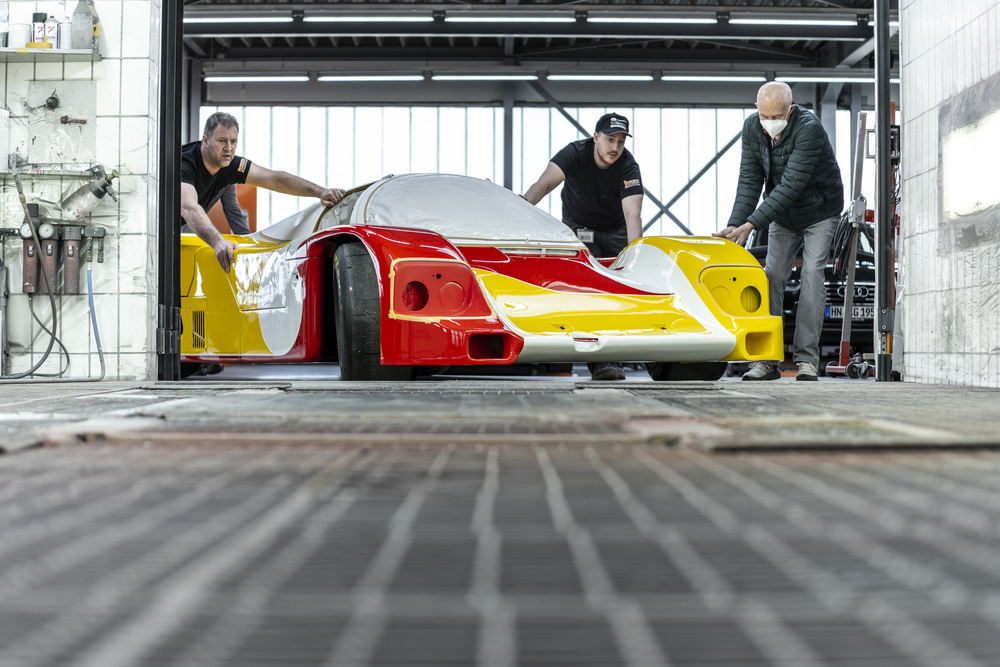 962 C restored to its original condition down to the last detail Almost 35 years later: Hans-Joachim Stuck meets his racing car from the 80s

Stuttgart . Hans-Joachim Stuck has had to wait almost 35 years for a reunion with the fully refurbished 962 C and its first rollout. So the surprise was all the greater when the silk cloth was drawn back to reveal the vehicle at the Weissach Development Centre. The racing car from the and Museum department has been restored to its original 1987 condition over the past year and a half. “It feels like coming home,” smiles Stuck, stroking the car’s left wing. The racing driver says he has nothing but fond memories of the victorious car with the racing number 17. “By arranging this reunion after more than three decades, we have not only surprised Hans-Joachim Stuck, we have also taken a little journey through time. The history of the motorsport story surrounding the 962 C is unique,” says Achim Stejskal, Head of and Museum. At the Weissach Development Centre, where the vehicle was first built and now has been restored to its original condition, Stuck also meets his race engineer of the time, Norbert Singer, and designer Rob Powell, the man responsible for the car’s black, yellow and red livery.

It is 35 years since the now 70-year-old won Germany’s prestigious and fiercely contested ADAC Würth Supercup. During the inaugural series for Group C sports car prototypes, he tested the then-new dual clutch transmission (PDK) at racing speed. The vehicle’s appearance changed before the second race, the Norisring 200 miles, when Shell came on board as a sponsor. also competed in yellow and red the following year and Stuck worked hard to successfully defend his Supercup title. This 962 C then began its second life as a test car in the aerodynamics department at Weissach, later serving as a reference vehicle for the sports car manufacturer’s corporate collection.

Armin Burger and Traugott Brecht from Historic Motorsport were jointly responsible for the racing car’s rebuild. “We kept passing this car in the warehouse. Then, about a year and a half ago, we decided to get it out of there, transfer it to Weissach and start working on it,” he Burger. He and his team had to rebuild many parts because they were long gone. “The cooperation with the other departments from was great. We found almost everything we needed within a radius of just 30 metres,” says Burger. At the very beginning of the reconstruction work, he invited Powell and Singer into the historic motorsport workshop. “When you hear the right people talking by the vehicle, everything immediately becomes clear. We learned an incredible amount from two witnesses who were right there when it all happened,” he adds. The experts completely rebuilt the underbody, changed the arrangement of the radiators and made many other bodywork adjustments. Then they presented the Supercup championship car to European media at a journalists’ workshop at the Weissach Development Centre.

Livery designer Powell brought along various thicknesses of tape, stencils and design sketches from 35 years earlier. “Stucki immediately liked the design of my first sketch,” he recalls. Stuck gives him an affirmative nod over the roof of the car while the designer tapes the lines and applies a stencil to the front headlight: “This is very important, for example, so that the painters can plan the cut-out correctly. By the way, I still think the colour combination of yellow and red looks modern,” says Powell, putting the rolls of tape over his arm, ready for the numerous questions from the press. Stuck, who was involved in the development of the car, also takes questions and waits for his turn to do the first laps on the run-in and test track. “I’m a big fan of the PDK dual-clutch transmission and proud that I was allowed to test it in the 962 back then. Being able to keep my hands on the steering wheel when changing gears at full throttle felt great right from the start,” he says. Today, PDK is available in every .

A second surprise awaits Stuck just a few metres from the test area, when he discovers his red racing suit from the 80s and is delighted to find he still fits into it. “For me, the time with was the most successful of my entire career,” he says, putting on his white star-decorated helmet and climbing in. Unlike the basic model, the 962 C has a wheelbase that’s 120 millimetres longer and pedals that are mounted behind the forward-mounted front axle. “We gave Stucki a very warm welcome at . He was always one of the drivers whose feedback I could interpret accurately, like the data from a sensor,” reveals Singer, who first introduced an aluminium monocoque with the 956 Group C car and its direct descendent the 962, as well as the Ground Effect underbody. Stuck starts his first lap on the two-and-a-half-kilometre test track in Weissach and all the spectators fall silent as they watch the Group C racer. “The car automatically takes me on a journey back in time and brings back many fond memories. I will never forget the atmosphere at the race tracks,” smiles Singer.

The 962 C made its first public appearance a few weeks ago at the Museum’s digital Sound Night. It will make many more appearances over the coming year, with driving and presentation events planned for the upcoming ‘40 years of Group C’ anniversary. “The 962 C was one of the few cars I was allowed to drive on my own, without team-mates and with exactly the setup I wanted. You never forget a car like that,” Stuck concludes, promising: “In 2022, we’ll celebrate the 40th in style!”