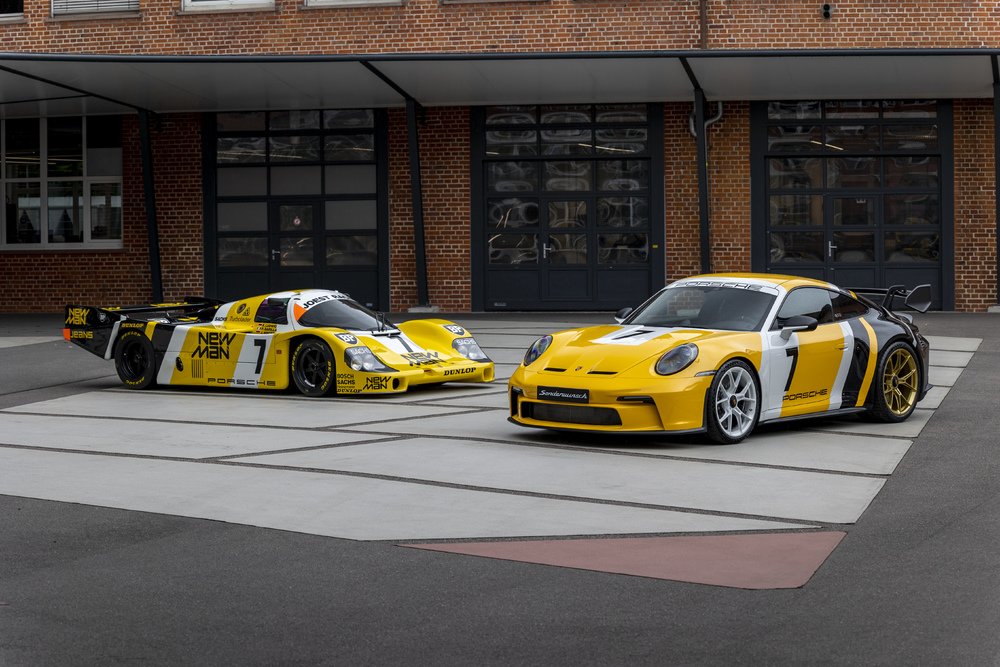 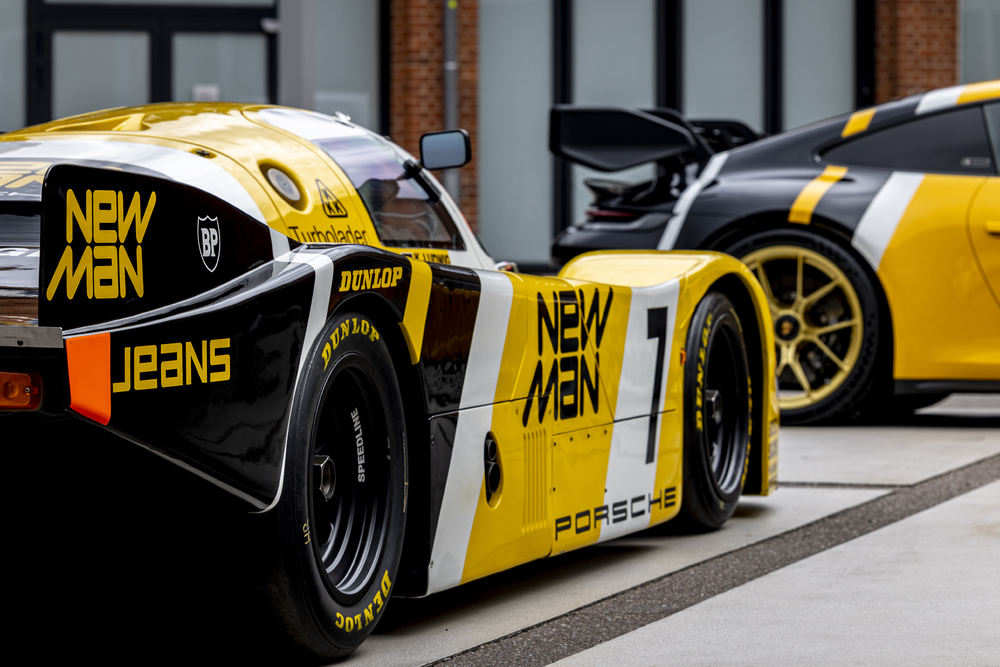 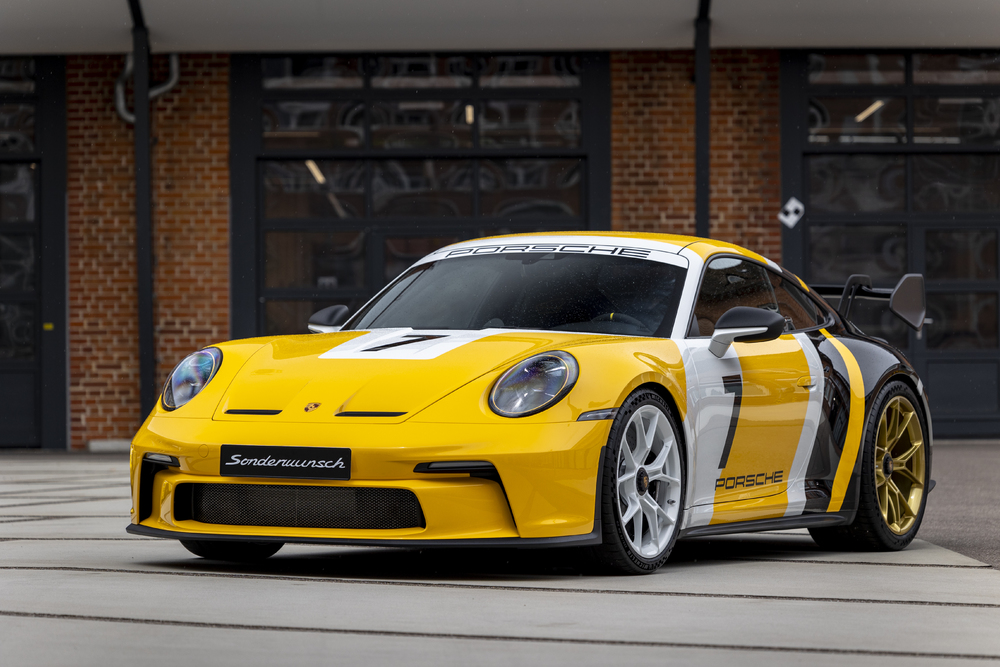 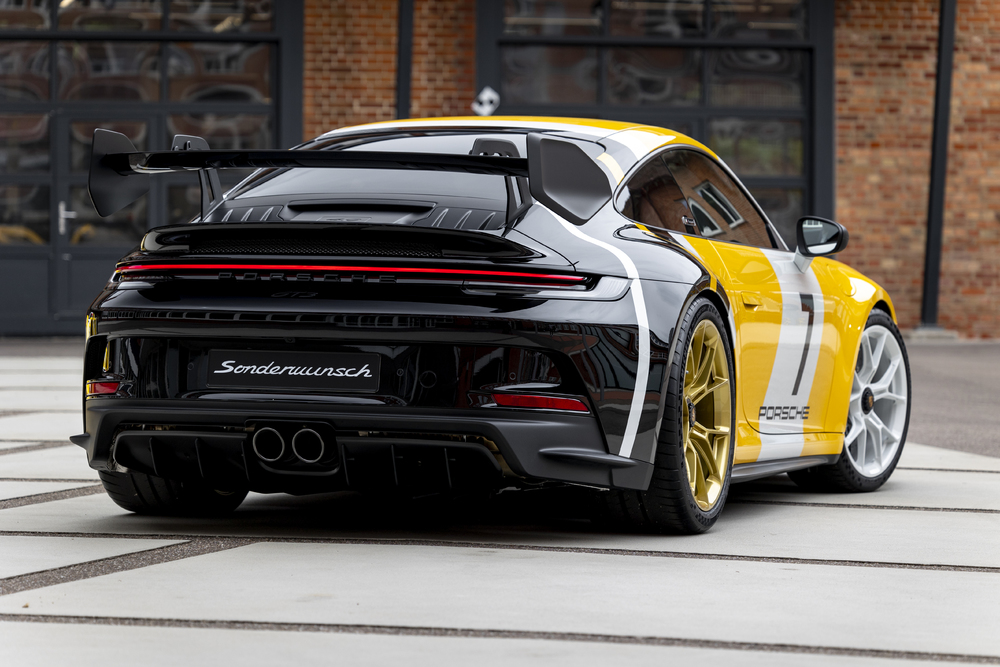 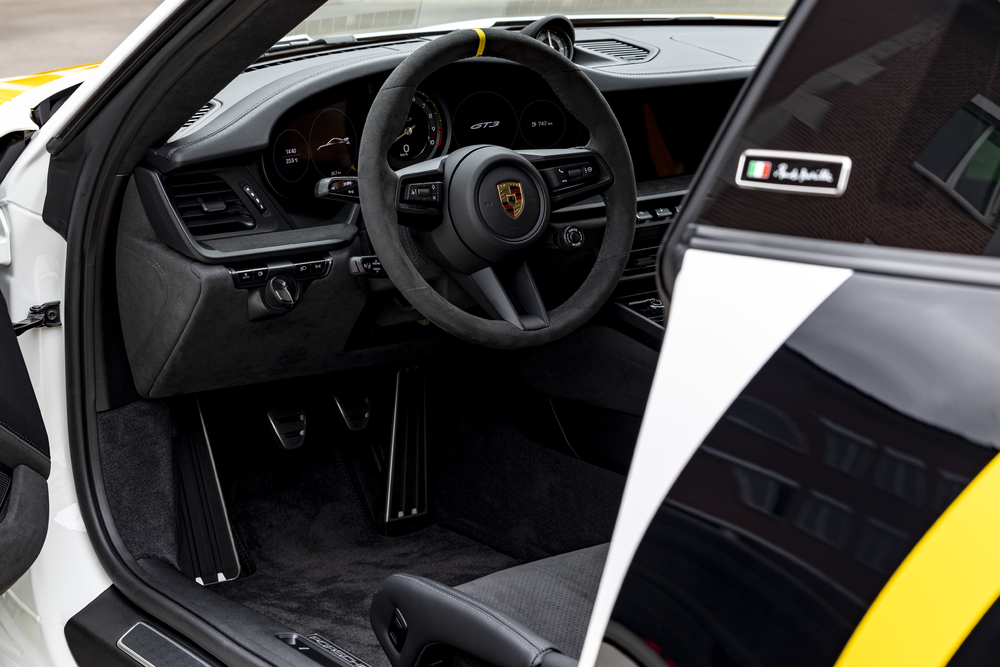 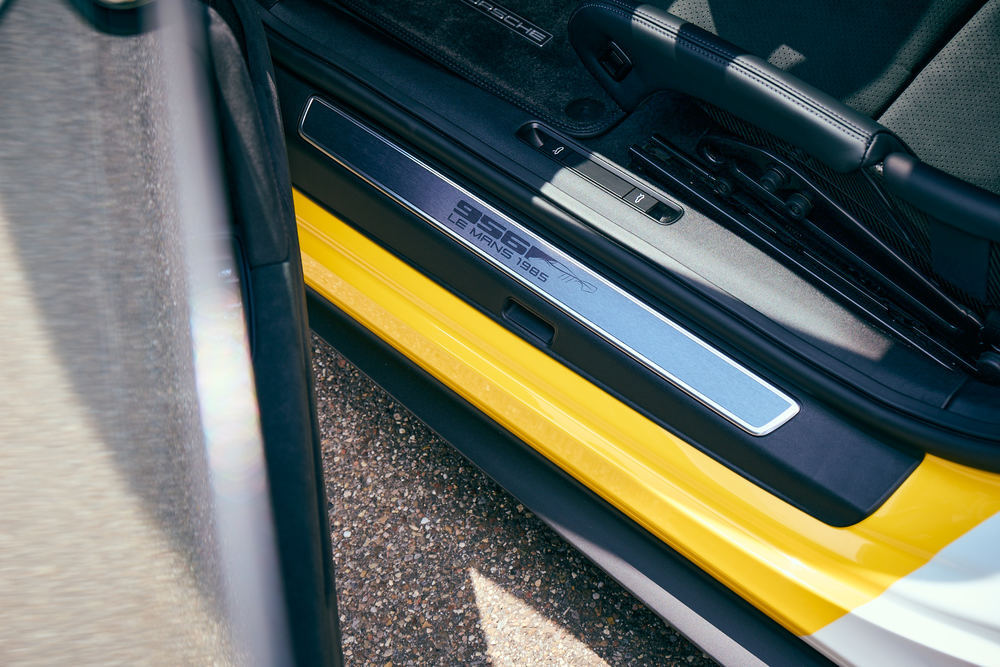 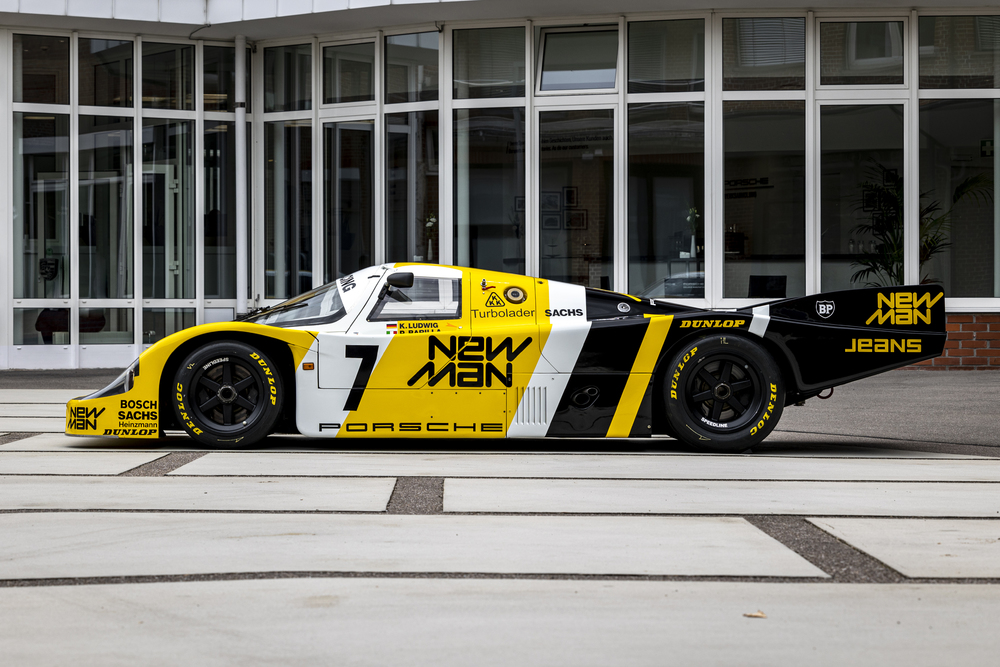 911 GT3: based on the 956 that won at Le Mans in 1985 First completed car project in the Sonderwunsch programme

Stuttgart . Pictures, cups and racing suits – the typical mementos of a motor sport career. Paolo Barilla, overall winner of Le Mans in 1985 in a private 956, has chosen a different, far more dynamic reminder of his greatest sporting success: on his 60th birthday, he was the first customer to complete a car project together with Manufaktur as part of the new Sonderwunsch programme. It became known as the "dream car". The Italian entrepreneur wanted to design a unique 911 GT3 (992) based on his Le Mans winning car and to be fully involved in its creation. In addition to the characteristic racing look in Summer Yellow, white and black, this special car has the winning race number 7 on its bonnet and doors. Other features such as the rear wing and the gear lever were also reinterpreted and in part developed independently.

"The unique customer experience is at the heart of the brand," according to Alexander Fabig, Vice President Individualisation and Classic at AG. "That's why the significantly expanded Sonderwunsch programme is another milestone in terms of customer enthusiasm worldwide. And this car project is the jewel in the crown of customisation by Manufaktur."

"In the Eighties, I had the chance to drive the wonderful 956, an iconic car in terms of performance and beauty," says Paolo Barilla, ex-racing driver and Deputy Chairman of the Italian food company. "The interpretation of some elements in a modern GT3 makes that memory exciting and vital – for me and for people who are close to me.”

As Alexander Fabig, Vice President Individualisation and Classic at AG explains, "the cooperation with Paolo Barilla was a very special project for too. Because not only is the handcrafted 911 GT3 itself highly individual, but its design process is also unique."

Unique from every angle
One of the special features of this 911 GT3 is its striking exterior paintwork in Summer Yellow, white and black. It reinterprets the striped design of the historic racing car. The front apron and the trim rings on the headlights are also painted in Summer Yellow. The design of the centre-lock wheels is inspired by the rims of the 956. When used in racing, these had White aeroblades. The 911 GT3 rims are also white at the front, while the rear axle is painted in a modern gold colour.

The side plates on the rear spoiler are also influenced by the design and geometry of their historic predecessor. Sample components were initially developed using rapid prototyping. Naturally, aerodynamic performance and, in particular, the balance between the front and rear axles needed to be retained, so the aerodynamic engineers from the series-produced 911 GT3 were included in the project at a very early stage. The modified rear wing had to prove its flow characteristics in the wind tunnel. "PB 60" is blazoned across the flanks, representing Paolo Barilla's initials and age. The style of this logo is inspired by the graphic of the then main sponsor of the Le Mans winning car.

Black dominates the interior, as you would expect in a racing car. The door entry guards and the decorative trim in yellow on the passenger side dashboard are decorated with a logo specially designed with the customer in mind. It combines the type code 956, the "Le Mans 1985" logo and the stylised silhouette of the racing car. This logo and the 1985 circuit are embroidered in the headrests. The gear lever is reminiscent of the magnesium ball in the 956 racing car and is an elaborate custom-made product: the top part was milled from an aluminium block and the surface was sanded.

From initial sketch to finishing touches in three years
Within the new Sonderwunsch programme, the client assumed the role of project manager. As part of the project team, made up of experts from Manufaktur and the Style design department, Barilla collaborated directly in the creation of his dream car. The process took a total of three years, from the first design sketch to the technical feasibility check and construction. Development started on the basis of the predecessor GT3 car, as the type 992 was still in series development.

"Many times in this project we would have had good reason to say 'It's not going to work' or 'It's too complicated,'" said Philipp Setter, Head of Sonderwunsch Customer Consultation at Manufaktur. "Once we decided to take on the challenge, we pushed the boundaries and were able to achieve a lot. With his clear vision and grasp of tight schedules and decision-making, Paolo Barilla was the right client and project manager for this ambitious project."

Summer Yellow from the "Colour of Choice Plus" programme
"Direct contact with the customer is the best thing that you can have as a designer," according to Grant Larson. Together with Harm Lagaay, Grant Larson designed the first and is currently the Director of Special Projects at Style . "I work for because that is where I can design dream cars. But the Sonderwunsch projects are in another dimension: The personal exchange with the client is extremely satisfying and helps us to better understand our customers' wishes in our daily work."

The biggest challenge for Larson was to transfer the graphic design from the extremely flat and square racing car to the more rounded shapes of the current 911. "Geometrically these are very different cars," said Larson. "The layout couldn't be transferred 1:1." First, he worked digitally on the computer, then the lines were projected onto a test body with a laser device and these were painted accordingly. The trial paint was applied three times before designer Larson and project manager Barilla were satisfied. The warm, yellow shade also had to be carefully chosen to closely match the historical model and to work in both artificial and daylight. The team finally opted for summer yellow from the extensive "Colour of Choice Plus" programme at Manufaktur.

"I originally wanted to move the race numbers on the doors further towards the centre of the white strip, but Paolo Barilla insisted that the "7" should be very close to the edge, like on his racing car," Larson recalls. During the project phase, he placed a 1:43 model of the racing car on his desk for inspiration.

Integrated into the family
Barilla visited three times during the concept phase to actively take part in the project from specification to completion. During the implementation phase, frequent consultations took place via telephone, email and video conference, followed by further visits – with his very own works ID. "Paolo Barilla was very pleased about this detail," says Setter. "When the works ID was handed over in person, he officially became part of the team and our family."

He also became an official production employee because Barilla himself flanged the gearbox to the engine in his unique car using a torque-controlled screw device. "Authentic experiences like these are ultimately what makes ," according to Setter. "Our customers have generally seen and experienced a lot, but for projects of this size, we always try to open a few more doors that would otherwise be closed, for very good reason."

About the Sonderwunsch programme
Manufaktur and Classic enhance and restore unique sports cars with a combination of skilled craftsmanship and attention to detail. As part of its Co-Creation strategy, the sports car manufacturer is now offering a new interpretation of its legendary Sonderwunsch programme from the late 70s, which will make it possible to design individualised, one-off cars in future – co-created by the customer and professionally produced by . The expansion of this offering is divided into the areas of Factory Commissioning for individual customer colour and material requests directly in production as well as subsequent Factory Re-Commissioning and Factory One-Off after vehicle delivery to the customer. Whereas Factory Re-Commissioning is also aimed at the implementation of individual colours and materials, the Factory One-Off is a systematic technical new development. Depending on the vehicle age, the technical experts of Manufaktur or Classic take care of implementation.

About Manufaktur
A sports car as individual as your own fingerprint, as unmistakable as your own lifestyle: Manufaktur in Zuffenhausen creates very personal customer vehicles through a combination of perfect craftsmanship and high-tech. Highly qualified employees with decades of expertise devote their full attention to every detail and enhance it through hand craftsmanship.

The experts can draw on a wide range of visual and technical customisation options for the exterior and interior. Visible examples include Sport packages, custom rim designs and interior trims, as well as the comprehensive "Colour of Choice Plus" range for all models. Manufaktur fulfils the highest demands with regard to materials and craftsmanship. Alongside individual customer vehicles, Manufaktur also produces limited small series and editions. Here, high-quality materials are combined with modern production technologies to create a harmonious overall concept.