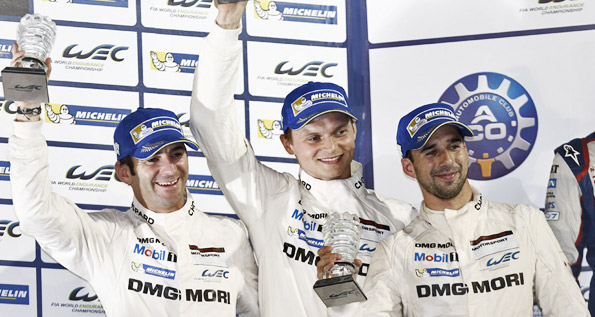 Stuttgart. For the first time both 919 Hybrid crews were part of the podium ceremony: The trio of Romain Dumas (France), Neel Jani (Switzerland) and Marc Lieb (Germany) finished second in round seven of the FIA World Endurance Championship in Bahrain. Immediately behind them the sister car crossed the line. Timo Bernhard (Germany), Brendon Hartley (New Zealand) and Mark Webber (Australia) came third in the six-hour race. These are the fourth and fifth podium finishes for the 919 Hybrid in its debut season.

Great fights for position in the beginning and strategies that produced exciting outcomes in the end were the result of the penultimate round of the world championship, along with high temperatures of over 30 degrees Celsius.

How the race went for car number 14:
Dumas started from pole position and stayed in front until he was passed by a Toyota on lap five. Being the only car in the leading group not to pit during a full course yellow on lap 17, he took the lead again and held it until his pit stop for fuel and tyres after 30 laps. Dumas handed over to Lieb after 61 laps with the car lying in second. Lieb came in for his first pit stop for fuel and tyres after 92 laps. On lap 100 he overtook an Audi and moved up to P3 again. After 123 laps Jani took over car number 14 in second position. After 154 laps he came in for tyres and fuel and after 182 laps for fuel only. On fresher tyres, he was the faster of the two 919 Hybrids and passed the sister car for second position.

How the race went for car number 20:
Hartley started from third on the grid, improved to second, but then dropped behind the two Toyotas to P4. Soon he suffered from problems with the brake temperatures. He came in during the full course yellow after 17 laps for fuel and tyres, and continued in P5. When he handed over the car to Bernhard after 48 laps, he had improved to third. Bernhard was leading the race when pitting after lap 79 for fuel and tyres and was then leading again, thanks to other cars’ stops, when he handed over the car to Webber after 110 laps. Webber refuelled and received fresh tyres after 141 laps. For his next stop, after 169 laps, the team and he together decided to take the risk of saving time by not changing tyres and only refuelling the car to go to the finish of the race.

Wolfgang Hatz, Member of the Board, Research and Development, AG: “Second and third with both crews on the podium – this is a very nice conclusion to this exciting race. We tried everything, but a race win wasn’t quite possible yet. However, again we have made a significant step forward.”

Fritz Enzinger, Vice President LMP1: “It is unbelievable that, after we celebrated our third pole position yesterday, today we made even more progress. What is really important: We were able to improve our race pace and get closer to the fastest cars. In the end we tried to do a double stint on the same set of tyres with the number 20 car, which didn’t really work out. Nevertheless, congratulations to the team! We look forward to Sao Paulo very positively.”

Andreas Seidl, Team Principal: “Having both crews on the podium is a great result. We have been close to it a few times before. Compared to earlier races, we got closer to Toyota, plus we learnt a great deal in terms of race strategy and tyre management. A big thank you to everyone in the team, including the drivers, for a very good job this weekend. Now we can’t wait to get to Sao Paulo. Congratulations to Sébastien Buemi and Anthony Davidson on winning the FIA WEC drivers’ title. ”

Romain Dumas (36, France): “I had a good start from pole position and enjoyed leading the race until the Toyota passed me. Then I was leading again after the other cars pitted during a short full course yellow. At this point the team decided to split the strategies for the two cars. Which one works out best you always only know at the end of the race. When it became cooler towards the end of my second stint the car improved a lot. So, this time, I left the nicer part of the race to my team mates.”

Neel Jani (30, Switzerland): “This was a good race. After yesterday’s pole position it is nice to have both cars on the podium today. Unfortunately in the end we were not in a position to fight for the race win. We will analyse to see if the decision on the strategy during the full course yellow was the right one. Nevertheless, in the end we were able to match the Toyota’s speed. We are improving race by race and today we were really close. Hopefully we can fight for the next step on the podium in Sao Paulo.”

Marc Lieb (34, Germany): ”I found a good rhythm during my stint. The car was significantly faster and more consistent in the night when it was cooler. Also, for me as a driver, it was a lot better and our 919 was very well balanced. Only towards the end of the stint did I have tyre degradation on both the front and rear. But I think I was able to catch up a bit.”

Timo Bernhard (33, Germany): “I had two trouble free stints, which for me went very smoothly, despite the fact it wasn’t easy to keep the car balanced. It looked good for us early in the race and in the beginning we stopped when the track was yellow. The traffic was very close and you really had to watch out, but it worked very well. With this double-podium finish we have reached our next target, so I’m happy.”

Brendon Hartley (25, New Zealand): “Today’s first double stint was a bit tricky for me. On the opening laps it was great fun and a fair fight with the Toyotas, but then I had a problem with the brake temperatures. I tried to play with all the toys we have available to help with such a problem, but it still cost me a lot of time. But when the temperatures dropped the car came alive again.”

Mark Webber (38, Australia): ”It is a great day for to get two cars onto the podium. The conditions were not easy for the cars and, therefore, the result is another milestone. We learn a huge amount in every event. With the number 20 car we were not quite able to do the same pace as the number 14 car today. For all three of us it was a tricky day, a bit like it started yesterday in qualifying.”