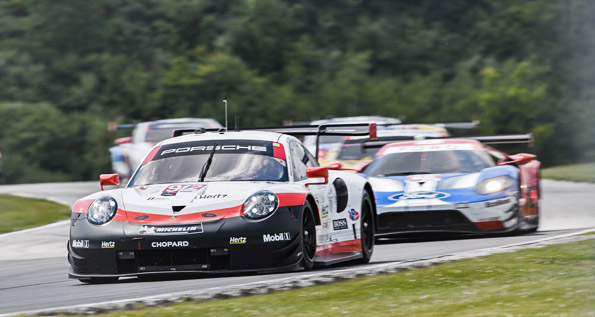 Stuttgart. The Virginia International Raceway hosts round nine of the IMSA WeatherTech SportsCar Championship this coming weekend (23-25 August). The GT Team travels to the storied racetrack as the leader of the manufacturer and driver classifications. With five victories as well as podium finishes at every IMSA race so far this season, the works driver crews, Earl Bamber (New Zealand) and Laurens Vanthoor (Belgium) in the No. 912 car, as well as Patrick Pilet (France) and Nick Tandy (Great Britain) in the No. 911 vehicle, currently rank first and second respectively in the GTLM class. leads the manufacturers’ classification with a 21-point advantage.

In addition to the factory squad’s two ca. 510 hp 911 RSR, the two customer teams Park Place Motorsports and Pfaff Motorsports will field a 911 GT3 R each in the GTD class at the 2:40-hour race. Like at Lime Rock, no vehicles in the faster DPi and LMP2 prototype categories will compete in Virginia. Thus, the GT Team will be chasing overall victory on the 5.263-kilometre circuit on Sunday.

The race
The Virginia International Raceway is located near the town of Alton close to the border of the US State of North Carolina. The circuit can look back on an eventful history and has evolved from a straightforward circuit for road vehicles to a modern racetrack resort with hotels and leisure activities. In 1971, legends Hurley Haywood and Peter Gregg won the inaugural IMSA GT event there at the wheel of a 914-6 GT. A year later the pair followed up with another victory. Tandy and Pilet pocketed the most recent win there in 2015. Bamber and Jörg Bergmeister rounded off this successful outing with second place.

The drivers
The winners of the Sebring and Watkins Glen races, Patrick Pilet (France) and Nick Tandy (Great Britain), share the No. 911 911 RSR. The pair currently ranks second in the drivers’ classification. Their works driver colleagues in the No. 912 sister car, Earl Bamber (New Zealand) and Laurens Vanthoor (Belgium), lead the class after victories at Long Beach, Mid-Ohio and Bowmanville, Canada.

In the GTD class, two 500+hp 911 GT3 R will compete. The customer team Pfaff Motorsports (No. 9) tackles the race with Canadians Scott Hargrove and Zacharie Robichon. works driver Patrick Long (USA) shares the cockpit of the No. 73 vehicle run by Park Place Motorsports with his compatriot Patrick Lindsey.

The vehicles
For its third racing season in North America, the 911 RSR has undergone further optimisation primarily in the suspension setup. Depending on the size of the restrictor, the engine, which is positioned in front of the rear axle, puts out around 375 kW (510 hp). The large rear diffuser combined with a top-mounted rear wing provides aerodynamic efficiency and significant downforce.

The 911 GT3 R fielded by customer teams was newly developed for the 2019 season. Improvements in the areas of aerodynamics and kinematics were systematically implemented from the insights garnered from the many race outings of its predecessor. The six-cylinder engine in the rear of the GT3 racing vehicle produces over 368 kW (500 hp).

The schedule
The race over 2:40 hours takes off on Sunday, 25 August, at 1:35pm local time (7:35pm CEST) and can be viewed live outside the USA and Canada on www.imsa.com.

Pascal Zurlinden (Director GT Factory Motorsport): “As we saw at the last race on the Road America racetrack, the competition amongst the drivers in the IMSA WeatherTech SportsCar Championship is extremely tough. The difference is in the tiniest details. After eight of eleven rounds, we are still leading the drivers’ and manufacturers’ classifications and we hope to earn more points in Virginia. We’ve climbed the podium at every race so far and our five victories underline the strength of our RSR. We also wish our customer teams the very best. Recently, the new 911 GT3 R secured two victories in a row in the GTD classification.”

Steffen Höllwarth (Programme Manager IMSA SportsCar Championship): “Virginia is a typical driver’s track. It requires a great deal of precision and there is virtually no room for error. The second you stray from the track you end up in the grass and that costs a lot of time. We’re feeling very motivated heading to Virginia and we’d like to build on this season’s success streak. We’re turning on to the finish straight of the championship and we’ll fight for every point.”

Patrick Pilet ( 911 RSR #911): “I have fond memories of Virginia – we won there once. We almost won last year, too, until we had to stop due to a technical defect.”

Nick Tandy ( 911 RSR #911): “Things didn’t go so well for us at the last IMSA race on the Road America racetrack, but Virginia International Raceway suits the handling characteristics of our RSR better. We’re hoping for a strong race.”

Earl Bamber ( 911 RSR #912): “I’m looking forward to Virginia. The track suits us. As the leaders of the drivers’ classification we want to build on our advantage, and we’re definitely aiming for a podium spot. And for , we’d also like to claim the manufacturers’ title.”

Laurens Vanthoor ( 911 RSR #912): “We’re leading the manufacturers’ championship by a decent margin. Our team’s goal is to have at least one of our vehicles finish on the podium at every race. We still have three races on the calendar and let’s see if we can manage this. Personally, I like the Virginia International Raceway – it’s a typical American racetrack that doesn’t forgive mistakes.”

Sebastian Golz (Project Manager 911 GT3 R): “After the outstanding GTD win at Road America we’re heading to Virginia under positive pressure. In 2018 we finished the race on second place and we were even on course for victory at times. We know that the circuit suits our rear-engine 911 GT3 R and our teams can build on last year’s experiences.”

Patrick Long ( 911 GT3 R #73): “The Virginia International Raceway lies in a beautiful part of the USA and is a special location. The challenge comes from the narrow track, which makes it difficult to overtake. The circuit is technically demanding with fast and slow passages. Since no prototypes will be racing at Virginia, I’m expecting a sprint race from start to finish.”